LOS ANGELES — As Hollywood prepares for Sunday night’s Academy Awards ceremony, a crowd of around 100 mostly Latinx entertainment industry professionals gathered Saturday morning at the corner of Sunset Blvd and Highland Ave —just one block away from where the Oscars will take place— to protest the decades’ long exclusion of Latinxs both on screen and behind the camera.

The demonstration, organized by the National Hispanic Media Coalition (NHMC) and its Action Network, rallied around the #OscarsSoWhite banner, a hashtag turned digital campaign conceived in 2015 by April Reign as a response to the staggering lack of diversity amongst the list of Oscar nominees. Today’s rally follows a January 23rd protest that took place outside of the Academy Awards nominee luncheon and is part of a larger, ongoing campaign to increase positive, more complex media portrayals of Latinxs on screen as well as to increase Latinx employment in the media overall.

“I’ve been a professional screenwriter for 27 years and I know for a fact that Hollywood goes out of their way to exclude us,” said writer, director, and producer Josefina Lopez, best known for the seminal 2002 film, Real Women Have Curves, starring America Ferrera. “I’ve been to pitch meetings where I have to educate grown-ass men about how racist they are.”

Holding a protest sign that read “Hollywood is Racist,” Lopez continued to share her mounting disappointment with the industry she’s worked in for a quarter century—one that she believes continues to exclude Latinxs. 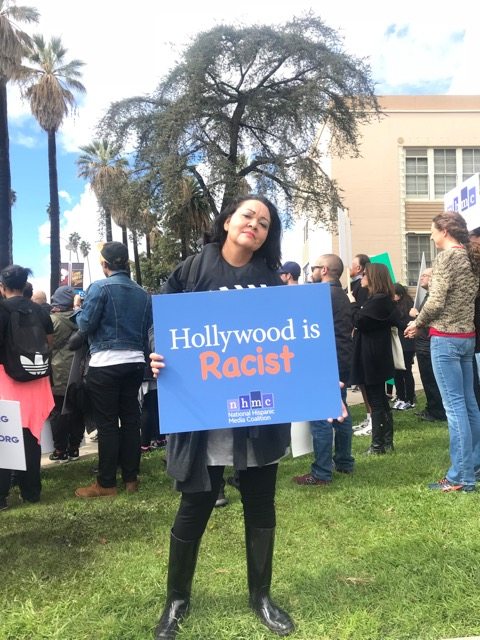 “Whoever controls the stories controls reality in society, and that’s also why the shift is not happening. It’s still a black and white conversation, and we’re still left out. The Asian community is also left out […] so it’s a really racist industry that supports white male privilege and we’re sick of it.”

Many of the other rally participants held signs boldly echoing similar sentiments to Lopez, including “American Latinos Excluded, Time to be Included,” “We’re not asking, we’re demanding.” and “White Privilege = White Hollywood.” 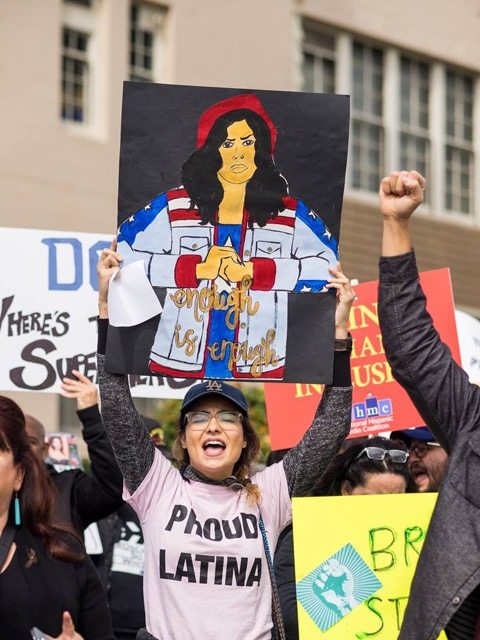 Saturday’s demonstration comes at a virtual boiling point of frustration for advocates of equitable Latinx representation and inclusion in media. The recently released UCLA Hollywood diversity report, “Five Years of Progress and Missed Opportunities,” revealed that in 2016, Latino actors filled only 2.7% of film roles (not proportionate at all to the 18% of the US population they make up), while whites were exponentially overrepresented, claiming 78.1% of the roles compared to the 61.3% of the population they make up. The numbers for Latinx representation in television were similarly dismal, as only 6% of roles on broadcast scripted shows and 5.6% on cable scripted shows went to Latinxs. In addition to the quantifiable underrepresentation of Latinxs on screen, the persistence of whitewashing roles in Hollywood serves to exacerbate the tensions around invisibility.

Earlier this week, a leaked audio recording of well-known Hollywood acting coach Lesly Kahn confirmed that many industry insiders believe it’s acceptable to further exclude Latinx actors by condoning the practice of non-Latinx actors accepting Latinx roles.  In the now viral recording, Lesly Kahn can be heard encouraging a self-identified Armenian-Jewish student to change her name to Rosa Ramirez after instructing her to “just fucking come up with the most Latin name”  and to “go to the head shot shop, tell them you’re Latin, wear something fucking red, wear some fucking sparkly earrings.

Egregious practices like the one exposed in the Kahn recording also serve to further exclude Latinxs from the screen. But the fact remains that even if all the characters written as Latinxs were filled by Latinx actors, underrepresentation would still prevail due to the utter shortage of Latinx roles available. This then leads to the conundrum of Latinx exclusion from illustrious industry award recognition, as is the case with this year’s Oscars where the list of acting nominees across all categories is devoid of any Latinx representation.

“Like Viola Davis said, you can’t win awards for roles that aren’t there,” emphasized Lopez. “And here’s the thing, Salma Hayek should have been nominated. That was an amazing role, you know? The story of an empath, a healer, in Miguel Arteta’s movie, Beatriz at Dinner. Why couldn’t she get nominated? Because she wasn’t showing her tits, she wasn’t playing the hot señorita or getting fucked.”

Although the #OscarsSoWhite hashtag remains painfully relevant in 2018, NHMC Business Advisory Board Chair Brenda Castillo emphasized that the protests go beyond exclusion by the Academy.

“The Latino community needs allies in Hollywood by way of studio support, executive engagement and the spearheading of our artists by powerful agents. We need industry professionals to bolster us,” Castillo said.

“They have ten days at the very most to come and talk, and if they do not, there will be a boycott,” promised Nogales.

Melinna Bobadilla is an actor and the co-host of Tamarindo Podcast. She tweets from @melinnateatrina.