Trinidad and Tobago to Decriminalize Homosexuality 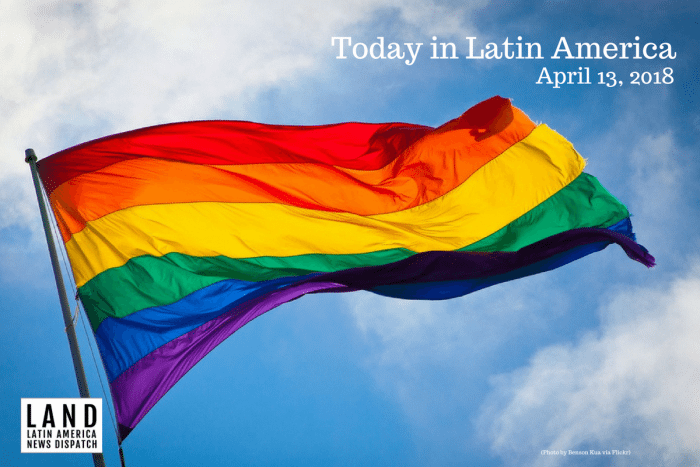 TRINIDAD AND TOBAGO: A high court judge yesterday struck down a colonial-era law banning gay sex in Trinidad and Tobago, a historic ruling that clears the path to decriminalize homosexuality in the Caribbean nation.

LGBTQ supporters and human rights groups celebrated the decision, hoping it will inspire other Caribbean nations that still criminalize homosexuality. A 2017 report found that homosexuality is still a crime in more than 70 nations around the world.

UNITED STATES: President Donald Trump said yesterday that the U.S. government was exploring the idea of rejoining the Trans-Pacific Partnership, a trade agreement he once described as “a rape of our country” and from which he withdrew in the first week of his presidency. The announcement comes weeks after 11 Pacific Rim nations agreed upon a renegotiated deal without the United States and follows pressure from farm-state lawmakers concerned about the negative impact of a potential trade war with China.

MEXICO: Newfound evidence on the 2014 disappearance of 43 college students from Ayotzinapa in the Mexican state of Guerrero suggests the crime was coordinated through text messages by gang leaders in Chicago and that there may have been up to 60 victims. Mexican newspaper Reforma reported on the discovery of text messages between leaders of Guerreros Unidos, a splinter group of the Beltrán-Leyva cartel, in Chicago and their hitmen in the city of Iguala, where the students were last seen. Centro Pro, the human rights organization that leads the case for the students’ parents, and Amnesty International have demanded the official investigation into the case continue, as its results until now have been “unsatisfactory.”

MEXICO: As cartel-related violence increases in Mexico, police and local soldiers in the state of Guerrero escorted a convoy of 92 people fleeing out of fear. Last month 13 people were evacuated from the same town, Totolapan, because of gang violence.

UNITED STATES: A former Mexican drug lord whose arrest in 2009 led to the murder of 12 Mexican police officers was sentenced in Texas yesterday to 43 years in prison. Arnoldo Rueda-Medina, known as “La Minsa,” was also ordered to pay a fine of $5 million for smuggling meth into the U.S.

PUERTO RICO: Puerto Ricans were left in the dark once again yesterday after a power outage cut off energy supply to almost 900,000 people. The outage led the U.S. territory’s main public hospital and international airport to rely on backup generators for several hours. Puerto Rico still uses most of the 2,000 generators than were installed after Hurricane Maria tore through the territory last September.

GUATEMALA: Voters in Guatemala will head to the polls Sunday to weigh in on a longstanding territorial dispute with Belize. The referendum asks voters whether the disagreement should be taken to the International Court of Justice in The Hague “for final settlement.” Guatemala has long recognized Belize’s independence, but it continues to claim about half of its territory.

PERU: The Summit of the Americas, where the heads of states that belong to the Organization of American States come together every three years, will be held in Peru’s capital today and tomorrow—but without the leaders of two key countries. U.S. President Donald Trump canceled to deal with the crisis in Syria and will be replaced by Vice President Mike Pence, joined by Sen. Marco Rubio, who will have a prominent role. Venezuelan President Nicolás Maduro, who had vowed to attend “by land, air or sea,” later changed his mind, arguing Peru had removed security guarantees for the Venezuelan delegation. This is the first time a president of either nation will not attend the summit.

ECUADOR: President Lenín Moreno, who was already in Lima for the Summit of the Americas, returned to Ecuador last night after Colombian news channel RCN announced it had photographs proving the death of the three Ecuadorean journalists kidnapped on March 26 by a dissidence of the FARC. Ecuadorean authorities are studying the photographs to determine their authenticity. Both governments have said that the kidnapping took place on the other side of the border.

BRAZIL: The Brazilian military started a training program for police forces of the state of Rio de Janeiro yesterday. Two months ago, President Michel Temer made the decision, criticized by many, including later murdered councilwoman Marielle Franco, to put the military in charge of security to stop the wave of violence in Rio. The current training program includes target practice and weapons maintenance.

BRAZIL: Dozens of Brazilian lawmakers from the left-wing Workers’ Party, co-founded by imprisoned former president Luiz Inácio Lula da Silva, have requested to change their parliamentary names, the ones that appear on polls and during sessions, to include Lula’s name as their middle names in what has been dubbed the “I’m Lula campaign.”