Caravan Asylum Seekers Learn About Their Rights in Puebla, Mexico 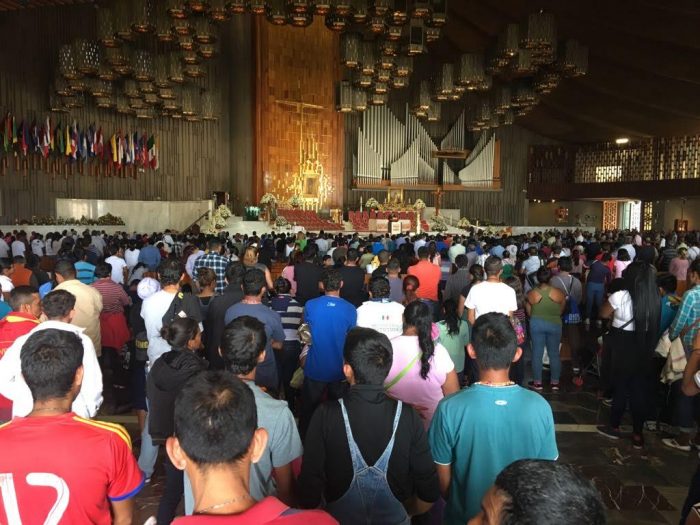 The Refugee Caravan in the Basilica of Guadalupe.

April 13, 2018 — Hundreds of Central American refugees have organized a caravan to protect themselves and defend their rights as they travel through Mexico, a testament not only to the severity of the human rights crisis in the Northern Triangle, but also to the tenacity and determination of its people. In addition to banding together for mutual support, safety, and protest in the face of repression, the members of the caravan are educating themselves on asylum law and the US immigration detention system with the help of volunteer attorneys.

As the Refugee Caravan arrived in Puebla on April 6, hundreds of local community members, church volunteers and doctors joined forces outside Our Lady of the Assumption Church (la Parroquia) to welcome participants with food, clothing, medical attention and shelter under the leadership of Father Gustavo Rodríguez. Inside la Parroquia, a volunteer team of over 20 attorneys and legal assistants convened to prepare a weekend of activities for Caravan participants interested in learning about seeking asylum in the U.S. and refugee status in Mexico.

On top of rampant organized crime, gender-based violence, and environmentally destructive megaprojects, the military repression unleashed against unarmed protesters after the US-backed Honduran electoral fraud last year sent a tremendous number of Honduran families fleeing in search of safety. The refugee families of the Caravan have now successfully traveled over 1500 kilometers by foot, hitchhiking, and train accompanied by the organization Pueblo Sin Fronteras. As the group continues north, they made a four-day stop in Puebla, Mexico to participate in a series of Know-Your-Rights workshops with a team of volunteer U.S. and Mexican immigration attorneys.

Over the next four days, the volunteer team delivered a series of presentations on legal rights guaranteed to refugees as well as the injustices of mandatory detention, family detention and family separation, surviving detention, seeking bond, and the potential impact of recent U.S. immigration court and policy decisions. They also facilitated workshops to address the needs of unaccompanied minors and LGBTQI community members and offered one-on-one, private legal consultations.

Elena Alderman, a volunteer coordinator on the ground with Pueblo Sin Fronteras, explained that the workshops help clarify often-bewildering processes that can differ for individuals based on their particular circumstances. “These workshops provide a unique opportunity to reach individuals before they decide to request asylum in the U.S. or refugee status in Mexico, providing essential information on their rights as well as the harsh realities of the system so they can make informed decisions for their families,” noted Alderman. 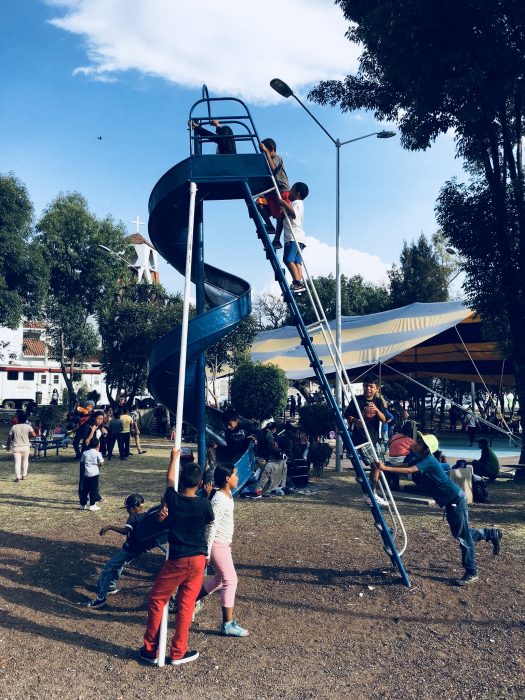 Half of the refugees on the Refugee Caravan are mothers, fighting to protect their young children. Marie Vincent, an immigration attorney from Pangea Legal Services in San Francisco, California, gave multiple presentations for Caravan participants over the course of the weekend in Puebla and led smaller workshops for unaccompanied minors. “We only spent four days with the families, the children, the single mothers and the unaccompanied youths, but a day is enough time to fall in love with their resilience, their strength, their search for safety and dignity, and their solidarity,” Vincent noted. “We went to Puebla to provide legal support and information to asylum seekers, and we met an incredible group with a life and community of its own.”

As the volunteer team learned, many of the refugees on the Caravan only recently escaped severe trauma, including brutal political oppression, domestic violence, death threats, murder of family members, rape, and torture. Now more than ever, after the electoral coup, the Honduran government has proven its unwillingness to defend its citizens from these horrors. After receiving a private legal consultation, one asylum seeking mother, who asked to remain anonymous, noted, “I feel as if a weight has been lifted off my chest. I’m still not sure what I will do. But that was the first time that I’ve shared what happened to me and it helped a lot.”

On Sunday afternoon, families lined up outside la Parroquia to eat lunch while the volunteer legal team gathered to touch base after a difficult presentation on the traumatic experience of mandatory detention for U.S. asylum seekers. “As the Mexican government puts on a show that doesn’t make up for widespread human rights violations and corruption, and as the U.S. government continues to ignore the Central American humanitarian refugee crisis that it contributed to create, we must continue to support the right to move, especially the rights of asylum seekers,” Vincent noted.

Nicole Ramos, immigration attorney with the nonprofit organization Al Otro Lado and director of the Border Rights Project in Tijuana, noted the importance of providing legal information to persecuted individuals. “Title 8 Section 1225 of the U.S. Federal Code establishes that any noncitizen who fears returning to their home country has a right to seek asylum in order to be protected from persecution and violence,” Ramos explained.

“The laws surrounding who is eligible for political asylum and why are incredibly complex.” noted Allegra Love, an immigration attorney from the Santa Fe Dreamers Project, who traveled to Puebla to participate in the workshops. “Generally speaking, people who turn themselves in at a U.S. Port of Entry are given the designation Arriving Alien, detained, and put through a fairly intense interview called a Credible Fear Interview.” After that, if they pass their interview, asylum seekers begin court hearings before an immigration judge.

Throughout the weekend, the volunteer legal team spoke with families and individuals about their goals for seeking protection. “Many of the Caravan families have decided to remain in Mexico and initiate petition processes with COMAR [the Mexican asylum office] despite its severe institutional shortcomings. Others have decided to continue on to request asylum at a U.S. Port of Entry,” Alderman noted. “The goal of the legal workshops is to provide information to participants regarding their rights and options for protection, but where and how they decide to seek refuge is ultimately up to them.”

As the Refugee Caravan moves north, Undocumedia, a 501c3 nonprofit organization in Los Angeles, CA and Pueblo Sin Fronteras have launched a YouCaring.com fundraiser to support the caravan participants on the way and in U.S. immigrant prisons. One hundred percent of these funds are being directly administered by migrant leaders and volunteers from Pueblo Sin Fronteras who are accompanying the Caravan through Mexico.

Find out more at PuebloSinFronteras.org and follow the Caravan at Facebook.com/PuebloSF.