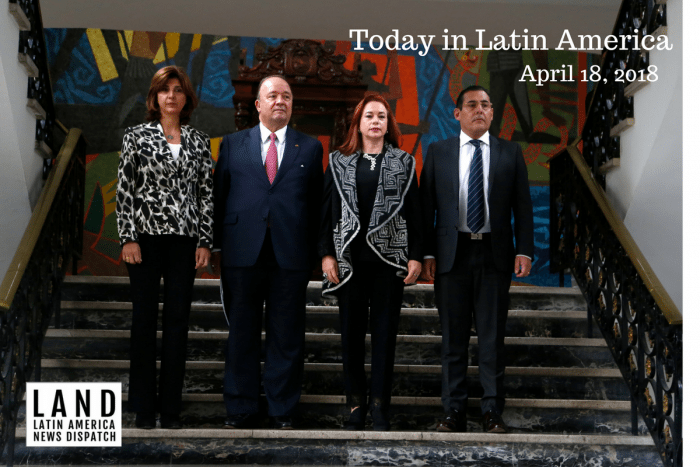 ECUADOR-COLOMBIA: Yesterday, Ecuadorean authorities identified as Oscar Efrén Villacís Gómez, 24, and Katty Vanesa Velasco Pinargote, 20, the two persons who appear in a proof of life video released on Monday by the FARC dissident group that operates on the border between Colombia and Ecuador. The kidnap apparently took place last week, either on Wednesday or Thursday, allegedly before the three journalists that the group had in its power were killed.

On Monday, Ecuadorean President Lenín Moreno had given the leader of the group alias Guacho, whose real name is Walter Artízala, 10 days to turn himself in. Ecuador and Colombia are conducting joint operatives on the border and the Red Cross has been negotiating the delivery of the bodies of the journalists, but alias Guacho stopped the negotiation on Monday accusing the governments of Ecuador, Colombia and the United States of “kidnapping innocent people” after 43 people were detained and are being investigated for connections with the group.The FARC dissidence, which calls itself Óliver Sinisterra Front, also blamed on Friday the death of the journalists on an attempt by Ecuadorean and Colombian forces to retrieve them by force.

The presence of Colombian guerrillas on the border has long been a source of dispute between the two countries. Although when the FARC was an active guerrilla it did not commit attacks in Ecuador, the Colombian government denounced it used the frontier to find safe haven from Colombian authorities. In 2010, a diplomatic crisis ensued when the Colombian military bombarded the encampment of the group’s second in command, Luis Édgar Devia Silva known by the nom de guerre Raúl Reyes, two kilometers into Ecuadorean territory killing the leader and sixteen others.

UNITED STATES AND MEXICO: The mental health of drug lord Joaquín Guzmán, El Chapo, is deteriorating due to the cell conditions of his imprisonment in a Manhattan jail, denounced his wife and his lawyer yesterday. The famous escape artist is due to begin trial for several murders, kidnappings and for money laundering in September. Emma Coronel, Guzmán’s wife, said that the harsh conditions of his Manhattan jail—including solitary confinement, lighting that is on continuously and temperature that is either too cold or too hot—have had psychological and physical effects. U.S. officials assured a judge they have taken steps to address the situation.

MEXICO: Mexico’s Office of the Attorney General denied a request from the National Anticorruption System for information on the advances of an ongoing investigation into the alleged bribe by the Brazilian construction company Odebrecht of Emilio Lozoya, who at the time served as campaign coordinator for current President Enrique Peña Nieto. The Attorney General’s Office argued that information on the case was reserved exclusively for the direct participants of the case.

UNITED STATES: Citing unconstitutional vagueness, the U.S. Supreme Court decided in a 5-4 decision to strike down a law that allowed the deportation of individuals who have committed serious crimes. The outcome will limit the Trump administration’s efforts to deport criminals of foreign nationalities.

JAMAICA: In the wave of the “Windrush generation” scandal, Britain’s government was criticized for a booklet produced in 2013 supposedly aimed at Jamaican immigrants being deported back to the Caribbean island which brings to mind campaigns of repatriation. The leaflet shares tips for British long-time residents, so they can blend in upon arrival. “Try to be ‘Jamaican’—use local accents and dialect,” the guide says. It also includes basic facts that should not be unknown to a Jamaican immigrant, such as the country’s currency and names of the main media outlets.

COSTA RICA: Costa Rican authorities announced they will track weapons from the moment they are imported into the country up to the moment of their sale, in an effort to  limit the circulation of arms and curb rising rates of crime and homicide. In 2017, the Central American country registered 603 killings, 12 per every 100,000 persons, the highest rate in its history. Public security officials suspect part of the weapons entering Costa Rica are crossing the border into Panama’s black market, where importing guns is forbidden.

COLOMBIA: Amidst the armed strike declared by the EPL holdout dissidence in its fight with the ELN guerrilla, Gov. William Villamizar of Santander declared on Monday a state of humanitarian emergency in the Catatumbo, a region on the limit with Venezuela. Around 1,000 families have fled and were received in refuges set up in the region. While yesterday military authorities said the situation was calm, transport to the region from the regional capital Cúcuta was on a standstill and schools and stores were closed.

BRAZIL: Sen. Aecio Neves, a major ally of President Temer and the close runner up in the last presidential election, will face charges of corruption and obstruction of justice during an upcoming trial after a decision yesterday by Brazil’s Supreme Court. Neves is also accused of allegedly hindering the investigation into corruption known as “Operation Car Wash.”

ARGENTINA: The Banking Association of Argentina declared a 48-hour national strike beginning yesterday after rejecting the salary increase offered by the business chamber. Even though inflation for 2017 was of 25 percent, the chamber proposed a salary increase of only 15 percent that would be divided into three installments: 7 percent immediately, 4 percent in July and 4 percent in October. This is the third banking strike in the country this year; the first strike was held on Feb. 19-20, the second strike was held on April 6.