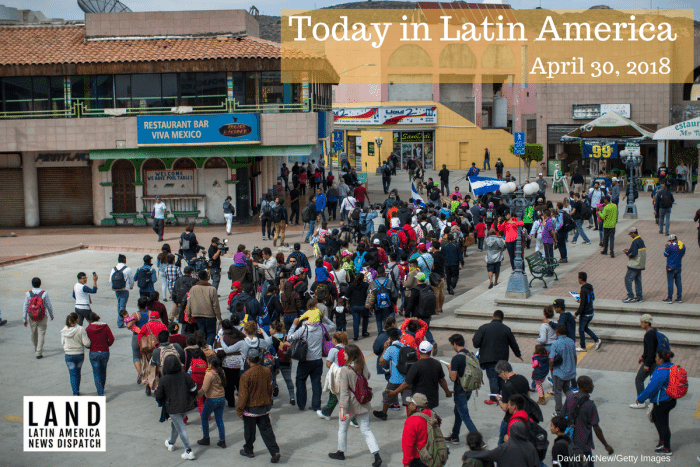 Members of a caravan of Central Americans traveling across Mexico walk from Tijuana Mexico to the U.S. side of the border. April 29, 2018. (Photo by David McNew/Getty Images)

MEXICO/U.S.: Between 150 and 200 Central American migrants reached the U.S. border Sunday after an arduous journey through Mexico, only to be turned away at the San Ysidro crossing. Authorities told the migrants, many of whom intend to apply for asylum within the United States, that the crossing station, the country’s busiest, had already reached its capacity of about 300 people. As of publication, reports indicated that while none of the migrants had yet been processed, a second attempt will be made today. Organizers told media that the migrants would be camping immediately outside the crossing in groups of 20, until the entire group had passed through.

The “caravan,” as the group is known, was not expecting a warm reception. Both U.S. President Donald Trump and Attorney General Jeff Sessions had threatened swift, retaliatory action, calling the caravan “dangerous” and a “deliberate attempt to undermine our laws and overwhelm our system.” It is still unclear whether yesterday’s delay was due to normal backlog, or a deliberate order to slow the caravan’s crossing. “The United States government is the most powerful government on the planet,” one migrant told ABC News. “We can build a base in Iraq in under a week, [yet] we can’t process 200 refugees? I don’t believe it.”

MEXICO: A local YouTube rapper confessed to dissolving the bodies of three missing film students in sulfuric acid, Jalisco state prosecutors say. The students were reportedly kidnapped last month, when members of the New Generation Cartel mistook one of them for a rival trafficker. An estimated 12,000 people marched through the streets of Guadalajara last Thursday, demanding justice for their apparent murder.

REGIONAL: British Home Secretary Amber Rudd resigned yesterday amid a scandal over the treatment of Caribbean-born citizens from the so-called Windrush generation. A key ally of Prime Minister Theresa May, from the Conservative Party, Rudd had told Parliament that she did not directly authorize or coordinate the forced removal of Caribbean-born citizens. But last week, a leaked memo revealed that Rudd was indeed aware of specific deportation targets.

NICARAGUA: Tens of thousands of protesters joined “Peace and Justice” demonstrations on Saturday, which the Catholic Church called for in response to a deadly government crackdown on nationwide protests last week. Led primarily by university students, the demonstration, largest in Nicaragua in decades, drew a diverse crowd outside Managua’s cathedral. After meeting last week’s protests over a proposed social security reform with intense repression, the government allowed Saturday’s demonstration to take place without disturbances.

BOLIVIA: Jailed dictator Luis García Meza died of heart failure yesterday morning at age 88. The former army general was convicted in absentia, extradited from Brazil in 1995, and sentenced to 30 years in prison, on charges including murder. Most of his sentence was served at the hospital where he died.

PERU: Authorities believe that a gun purchased by Sebastian Woodroffe was used to kill indigenous leader and healer Olivia Arévalo. Woodroffe, a Canadian traveler to whom Arévalo reportedly refused treatment, was lynched earlier this month by community members who accused him of killing Arévalo.

PARAGUAY: President Horacio Cartes pledged Friday to move the country’s embassy in Israel from Tel Aviv to Jerusalem before the end of his term in August. Following Donald Trump’s controversial decision to transfer the U.S. embassy, first Guatemala and then Honduras have also followed suit.

BRAZIL: A lone gunman opened fire on supporters of former President Luiz Inácio Lula da Silva Saturday, wounding two, authorities say. The supporters were gathered in a protest camp outside the prison where the former president began serving a 12-year sentence for money laundering and corruption earlier this month. A similar attack against Lula’s supporters took place on March 27, when two of Lula’s campaign buses were hit by gunshots, according to party officials.

CHILE: Pope Francis apologized in person this weekend to three survivors of childhood sexual abuse, who were flown to the Vatican on Francis’ invitation. During a recent visit to Chile, Francis had cast doubt on the survivors’ claims that a bishop had participated in the cover up of their abuse, comments for which he later apologized publicly.