On Monday, Latino Rebels contributor Ray Salazar shared a very personal story about how his son’s Chicago area baseball team were called “Taco Boys” by a team from the Kennedy Park Little League. Ray’s Sunday tweet (see below) was also seen by a Chicago Sun Times reporter, who also wrote an initial piece about the incident.

When the Beverly (a Southside Chicago ‘hood that’s VERY white) baseball team ran by my 12-yo-son’s team during warm ups, they teased them, “Ándale, taco boys.”

The umpire nor the coaches were aware of the situation until it surfaced online. In the wake of the claims, me and the league started an investigation into the situation. So far we’ve been unable to validate that the incident occurred. In light of this, coaches will be instructed to speak with their teams. We pride ourselves on being welcoming to other teams. We have a code of conduct online that we stand by so we are not done investigating the situation and any of the allegations against the coach or his behavior.

The Kennedy team lost to West Lawn in the game, and now, it appears that Kennedy has taken disciplinary action against some players and coaches, as a new statement released Monday hit Chicago’s media: 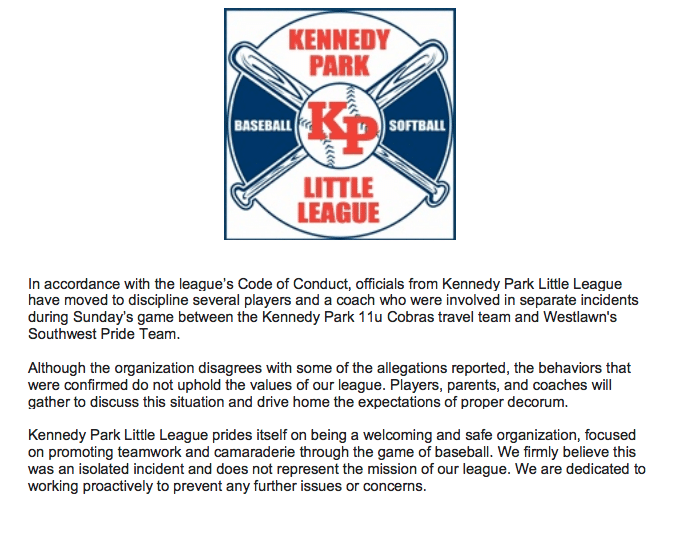 When the Chicago Sun Times reached out to the league Monday about the nature of the discipline and who was disciplined, it received this email response from Kennedy Park Little League board member Marty Nitsche:

We will not be releasing his name. Remember we are all volunteers who spend an incredible amount of time teaching and coaching these kids. The situation has been dealt with and we are moving forward as a league. We consider this matter to be closed and respectfully request you do the same. Thank you.

As for LR contributor Salazar? This is what he told the Sun Times:

I think the key thing here is that Kennedy Park needs to recognize the inappropriate behavior. Then us parents need to make sure we’re instilling values that promote good sportsmanship. And when something goes wrong, us grown-ups need to be adults about it because this is about our kids playing a classic sport—and having fun.