By Claire Tighe and Lauren Gurley

More than seven months after Hurricane María, organizations serving domestic violence and sexual assault victims in Puerto Rico report an increase in violence against women since the storm.

Yet a breakdown in island infrastructure and unreliable statistics from official sources makes it difficult to quantify the problem and respond to the emergency needs of victims in the U.S. territory.

Sexual violence and intimate partner violence tends to rise in the aftermath of natural disasters due to the high levels of stress, the scarcity of basic necessities, and the breakdown of social networks, according to the World Health Organization. Puerto Rico has one of the highest rates of violence against women in the world, which has increased over the last few years.

Leaders of organizations serving victims on the island say the two hurricanes last fall likely exacerbated the rate of violence against women in Puerto Rico.

At Casa Nueva Mujer, an organization operating a domestic violence shelter in Cayey, Executive Director Vilmarie Rivera says she was serving 18 families before the hurricane. 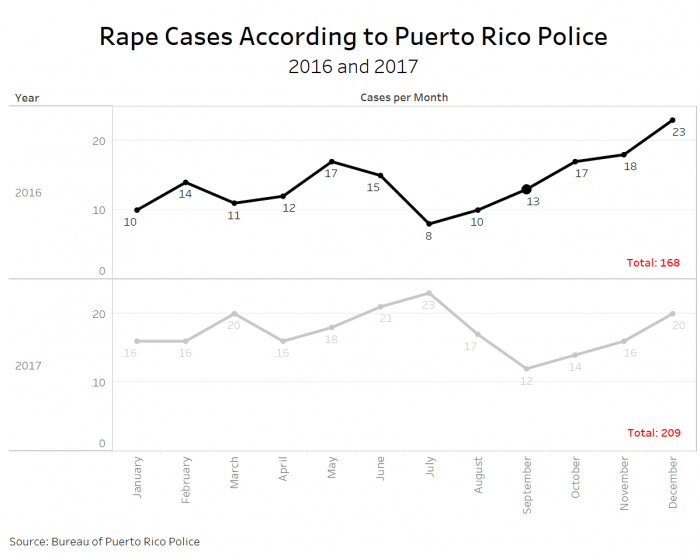 Now she says she is helping 43, but the state’s official records on domestic violence do not match what organizations like hers are seeing in their work.

“The situation is that we don’t have statistics that prove that we have an increase of those cases,” she says.

One potential reason for gaps in information is that three different government offices measure the relevant data. The Women’s Advocate Office records requests for domestic violence services and calls to their hotline. The Police Bureau tracks incident reports for sexual assault and domestic violence in person and over the phone. The administrative courts track criminal cases and the number of orders of protection filed.

“The statistics of the three agencies do not match, because they don’t have an integrated system,” says Amárilis Pagán Jiménez, executive director of Proyecto Matria, a social services organization for women based in Caguas.

Advocates like Pagán Jiménez believe the rates of violence are much higher than reported, in part because official emergency hotlines, including lines operated by the Police Bureau and the Women’s Advocate Office, were down in the days and weeks after Hurricane María. If victims had phone access to call 911, the Police, or the Women’s Advocate hotline, it was unlikely they would get through due to damaged power lines and the high level of phone traffic.

“Everything stopped working,” she says.

González estimates that it took more than a week to reinstate the hotline at the Women’s Advocate Office, one critical source of official support for victims on the island.

But Carmen Lebrón González, director of the Women’s Advocate Office, says that the hotline only lost power intermittently. 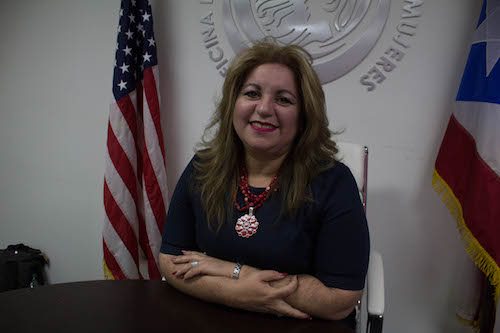 “It was periodical,” she said of the outages. “There were interruptions that sometimes lasted two days.” During that time, Lebrón Gonzalez says the office rerouted their emergency hotline to 9-1-1.

But even before the hurricanes, local leaders like Vilma González say it was difficult to collect accurate statistics for violence against women. Because of the stigma or the fear of consequences, victims often do not report incidents of sexual assault and domestic violence. The hurricane likely exacerbated this trend.

“There is no way we can have accurate statistics,” Vilma González says. “There were a lot of people that didn’t have telephones to start with. But we know that so many cases of domestic violence and sexual assault were occuring.”

González says her coalition’s member organizations reported an increase in walk-ins, referrals from other organizations and phone calls from persons requesting services.

For victims who did want to report crimes against them or seek help, unreliable phone access would have stopped them from doing so. The US DOE estimates that nearly the entire island lost power the day after Hurricane María. Thirty days after the hurricane, only 18.5% of the island had power.

“We think that most of the cases were probably never reported during the first month of the hurricane,” says Pagán Jiménez. 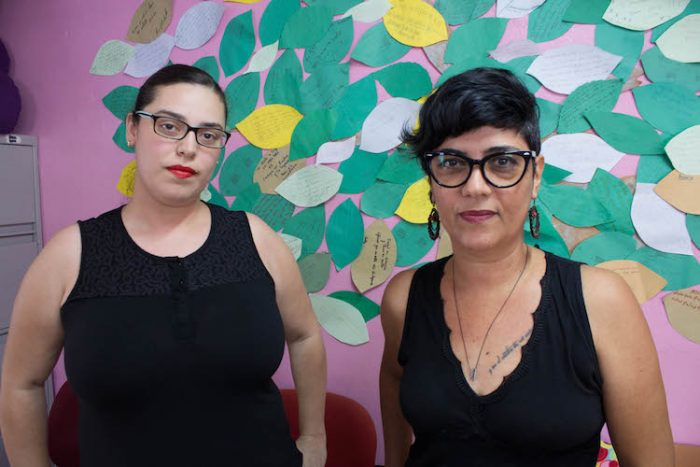 In the struggle for basic survival, reporting a case of domestic violence or sexual assault may not have been a first priority for victims struggling with the devastation wrought by the hurricane.

“If you are a victim of sexual assault, you are not going to see that as a priority, because you are thinking, ‘I need to survive’,” says Vilma González.

A fear of police or lack of faith in the system meant to help survivors, like law enforcement or government offices, may have been another cause.

Both Vilma González and Pagán Jiménez say they received reports from across the island of police failure to record in-person and telephone reports of violence.

“[Victims] confronted a lot of trouble, because [the police] didn’t want to take their reports. They were not giving the priority to cases of domestic violence,” Vilma González says.

For González, the attitude is consistent with individual reports and accounts from coalition members. In Caguas, Proyecto Matria echoed this concern.

“This was repeated throughout the island in different police departments,” says Pagán Jiménez. “They do not consider their domestic violence case an emergency.”

The Puerto Rican Police Bureau has a track record of failing to report cases of violence against women. In 2011, the US Department of Justice found that the agency was underreporting sexual assault and domestic violence.

As of April 4, 2018, the Police Bureau cites a six percent increase in rapes compared to the year before. The agency said in an email that 8,473 cases of domestic violence occurred in 2017, compared to 11,640 in 2016. It is difficult to determine whether there was an immediate rise in domestic violence following the hurricanes last fall. The agency has not published pre- and post-Maria domestic violence statistics delineated by month of occurrence for 2016 and 2017. Calls by the Center for Investigative Journalism to the Domestic Violence Unit were unanswered. 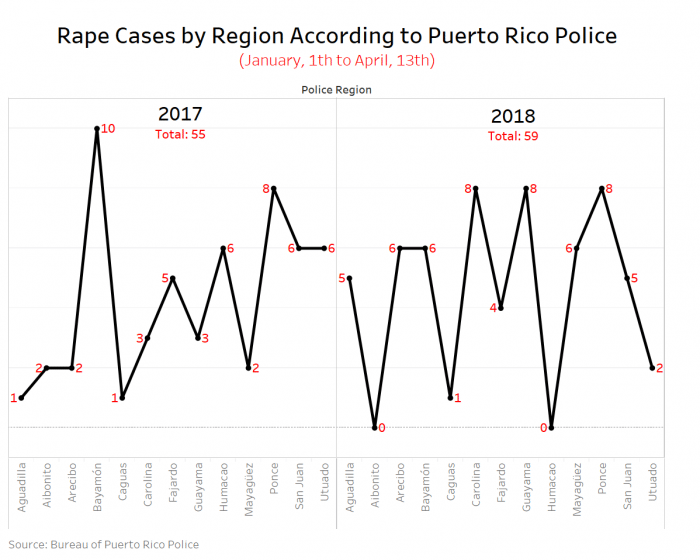 The closure of courts was another contributing factor to the lack of reporting. With most of the 13 regional courts closed, victims were unable to file for orders of protection or have their criminal cases heard, other official indicators of incidents of domestic violence.

“Only three courts were open: Aguadilla, Caguas, and Mayaguez,” says Pagán Jiménez. “Women in the south of the island didn’t have a place to go.”

“Women living in rural areas were more affected because there are fewer services for them,” says Vilma González. “The accessibility of getting to help is much more complicated.”

Domestic violence shelters were one reliable service for women in remote areas. But of the eight working domestic violence shelters on the island, only five were operating in the aftermath of the hurricane due to storm damages. In San Juan, Casa Protegida de Julia de Burgos relocated its participants due to security concerns from the damages. In Humacao, the island’s east side, Casa de la Bondad suffered damages that forced it to temporarily close.

In Arecibo, survivors would have been hard pressed to find a shelter in the aftermath of the hurricanes, despite having two domestic violence shelters based in town. One shelter, Capromuni, temporarily closed due to hurricane damage. The other, Casa Protegida de Luisa Capetillo, a municipal shelter, shut down indefinitely in September due to a lack of funding.

Despite the gaps in infrastructure to support victims of violence, organizations serving women say the need for services remains steady.

“I know that the shelters that are still open are totally full,” says Edna Zamot, director of Casa Protegida de Luisa Capetillo. 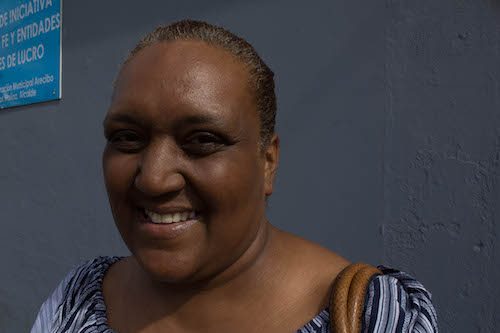 Experts like Pagán Jiménez and González say challenges like the closure of shelters in Arecibo after the hurricane highlight the need for more government support.

Pagán Jiménez says the response of the Women’s Advocate Office immediately after the hurricane and in the months after has not been adequate.

“There wasn’t a plan on behalf of the government and agencies responding,” she says. “They gave priority to gas stations, directing traffic, but not domestic violence and sexual assault.”

But the Women’s Advocate Office says that assisting domestic violence shelters was central to their emergency plan immediately after the hurricane.

“We did have an emergency plan that in fact was activated and worked,” Lebrón Gonzalez says of her office’s hurricane emergency response. “We did a lot to ensure that the shelters were available for women.”

But their alleged efforts have not been felt by the agencies who have been overwhelmed since the hurricane struck. Survivors of violence on the island continue to deal with a system that cannot meet all of their needs.

“Survival after María is much more complicated and more difficult than before,” Vilma González says. “But here we are.”