Argentine Chamber of Deputies Passes Abortion Bill, With Vote by Senate to Follow 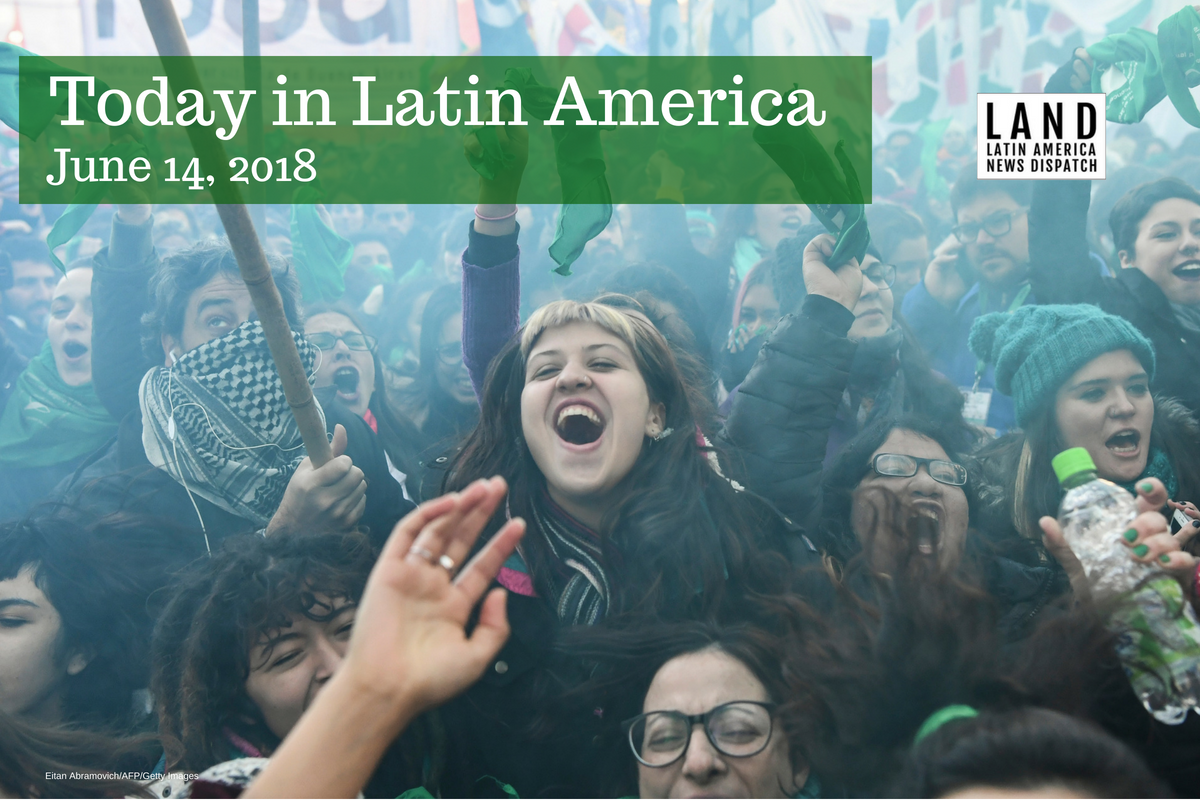 Pro-choice activists react outside the Argentine Congress in Buenos Aires, on June 14, 2018, shortly after lawmakers approved a bill to legalize abortion. (Photo by Eitan Abramovich/AFP/Getty Images)

ARGENTINA: The Chamber of Deputies passed a bill allowing elective abortions in the first 14 weeks of gestation after a 22-hour discussion in the lower house of the Argentine Congress. Out of the 275 deputies 129 voted in favor and 125 against, the debate was not held along party lines as legislators were allowed to vote according to their beliefs. The bill will now go to the Senate, and although President Mauricio Macri is against it he has said he will not veto it.

Currently, abortion in Argentina is only legal in cases of rape or when the life or health of the woman is at risk and women in such cases have to apply to a judge for permission. But non-governmental organizations calculate about 500,000 clandestine abortions are performed every year, often in dangerous conditions.

The controversial debate brought thousands to the Congress Square in Buenos Aires. Supporters of the bill identified by green neckerchiefs started arriving at midday yesterday and opponents convened at six in the afternoon, large screens were set up to watch the debate and both groups were planning to stay there through the night.

MEXICO: Gang extortions and threats have led Pepsi to close its distribution center in Ciudad Altamirano, in the state of Guerrero, only three months after Coca-Cola did the same. Grupo Gepp, the Pepsi subsidiary, said in a statement that the closure was only temporary but in a region completely dominated by the Knights Templar cartel, violence has only increased with gangs progressing from stealing from trucks to attacking distribution centres.

UNITED STATES-MEXICO-CANADA: The FIFA announced yesterday that the World Cup soccer tournament of 2026 will be held in the United States, Mexico and Canada, the first time the event will be held in three countries. The announcement came at a time of high tensions because of the renegotiation of the North American Free Trade Agreement and the unilateral tariffs on steel and aluminum the Trump administration has imposed on its neighbors and their threats of retaliation.

HAITI: Haitian authorities banned Oxfam GB from operating in the country after staff responding to the 2010 devastating earthquake hired prostitutes (which is against the Caribbean nation’s laws). Haiti’s government said this was a “violation of its laws and serious breach of the principle of human dignity.” Oxfam’s British affiliate had been temporarily suspended in February after the scandal broke, but other affiliates from Italy, Spain and Quebec will continue to work there.

NICARAGUA: Catholic bishops announced yesterday they will restart their mediation on Friday. They said they will make public the proposal that they made to President Daniel Ortega last Friday and “the letter he has sent us with his concerns, which we will submit to debate in order to seek a consensus,” the statement said. It appears Ortega decided to go back to the negotiation table after a nationwide 24-hour strike was called for today. Different sources now put the number of dead from the protests between 147 according to Reuters and 154 according to AFP.

VENEZUELA: The Maduro government announced yesterday it would release 43 more prisoners as part of its “national dialogue” goodwill demonstrations. With this third round of prisoner releases since the reelection of Maduro the total of liberations will be 122. All former detainees are forbidden from talking to the media or leaving the country.

COLOMBIA: The only presidential debate that was going to take place between the two candidates for Sunday’s runoff election was cancelled yesterday because of scheduling difficulties. Gustavo Petro, who is second in the polls, had already confirmed his participation but the eight regional public channels organizing the debate said it needed both candidates to take place. After about a hundred debates were organized by the media and universities in the months before the first round of voting, making it impossible for all the candidates to attend every event, this was the only attempt made to organize a face-to-face of the two candidates that went through to the second round.

BOLIVIA: The opposition coalition Democratic Unity denounced that the judge who had allowed the reelection of President Evo Morales was named by the government to a diplomatic post in Switzerland. Ruddy Flores, a former justice of the Constitutional Court, was named minister councilor in Geneva.

CHILE: The police and prosecutors launched unexpected raids on Roman Catholic Church offices in two Chilean cities yesterday looking to seize documents related to a scandal of sexual abuse and cover up. The raids in Santiago and Rancagua, a city in the O’Higgins region in central Chile, surprised Church authorities hours before a meeting was already set between two leading Vatican investigators, Archbishop Charles Scicluna and Monsignor Jordi Bertomeu, and the country’s top prosecutor to discuss collaborating on civil and canonical probes. Scicluna and Bertomeu were the authors of the report that led Pope Francis to change his mind about the Chilean scandal. Chilean authorities are investigating at least 40 cases of sexual abuse by individuals connected to the Church.