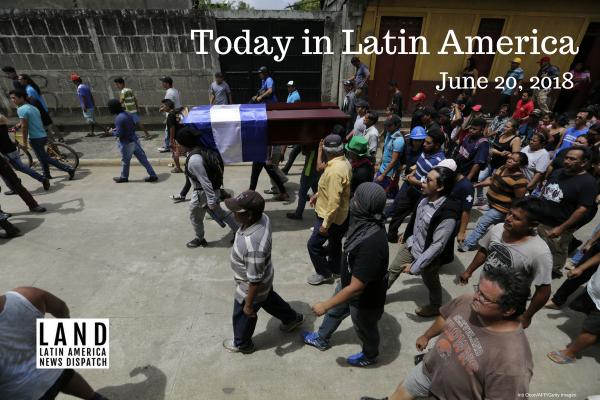 Friends and relatives of Jorge Carrion, 33, shot dead during protests against the government of President Daniel Ortega, carry his coffin during the funeral in the city of Masaya. June 7, 2018. (Photo by Inti Ocon/AFP/Getty Images)

NICARAGUA: Between three and five people died when government forces and pro-government militias attempted yesterday to take back the city of Masaya, which had declared itself in rebellion to the government a day before. During the attack, 34 people were wounded in Masaya and another 37 were wounded in the town of Ticuantepe, both towns are part of the metropolitan area of the capital Managua. Civil rights organization Nicaraguan Association for Human Rights also denounced an undetermined number of people were taken by the police in “selective raids” around the city and said that the government forces had rescued the chief of the police department in Masaya, who had been besieged by opposition demonstrators for almost a month.

The U.S. ambassador to the Organization of American States, Carlos Trujillo, arrived yesterday to Nicaragua to meet the different sides of the conflict ahead of the extraordinary session of the Permanent Council on Nicaragua at the Inter-American Commission on Human Rights.

MEXICO: Activists, authorities and international NGOs are debating on the effect 10 presidential decrees published on June 5 will have on water preservation. The government’s National Water Commission said on Monday that the decrees do not benefit any particular interest and on the contrary protect water reserves on a higher percentage than what international recommendations suggest. The WWF agrees and has celebrated the new decrees. But activists supported by OXFAM say the decrees lifted 295 out of the 756 prohibitions on extracting water and invalidated about 50,000 previous water concessions granted for life to agrarian and rural communities in favor of urban areas, opening up the possibility for mining, fracking and oil industries that are already in the areas to get concessions for the water. The decrees changed the status of very strict closed zones, zonas de veda, into more lax reserve zones, zonas de reserva, where limited use of water is permitted for public utility reasons.

UNITED STATES: As the debate over the policy of separating undocumented families crossing the border between the United States and Mexico continues, governors from at least eight states have announced that they will withhold or recall their National Guard troops from the southern border. Most of the governors are Democrats but the Republican governors from Maryland and Massachusetts, who face re-elections this fall, also withheld their troops.

PUERTO RICO: The archipelago’s main radar was finally replaced earlier this week after Hurricane Maria destroyed the old one nine months ago. Officials are now testing the software and the radar should be fully operational this month, early into this year’s hurricane season which has already started. The Department of Defense had deployed two mobile short-range radars to monitor local weather and regional trends that allow authorities to issue warnings to communities, but the longer-range radar will fill a major coverage hole that was left in the northern Caribbean. The new radar was built to withstand Category 4 winds, which is less than the old radar damaged by Maria which was supposed to endure Category 5 winds.

EL SALVADOR: Yesterday, for the second time in just three days demonstrators took to the streets of El Salvador to protest the comprehensive water act that is being discussed in Congress. A bigger march took place on Saturday. The law proposes the creation of a governing board to administer water resources with one representative of the government, two representatives of the private business association and two representatives of the association of municipalities. Protestors say this amounts to a privatization of water.

COLOMBIA: The Senate voted yesterday to postpone the discussion of the law that creates an operating manual for the special peace justice for when the new ppresident-elect is in power. The transitional justice system is part of the peace agreement between with the former FARC rebels and has had major setbacks because of the political controversies around it, although it was officially set up on March 15 it cannot start to function without an operating manual. President elect Iván Duque is set to meet with representatives in the lower chamber today to convince them of postponing the vote too. Santos tweeted yesterday saying he will convene extraordinary sessions if the law isn’t approved this week, when the ordinary parliamentary sessions are set to end.

CHILE-BOLIVIA: The presidents of the two Andean countries got into a Twitter argument over the case over the use of the Silala river’s waters—which is being heard in the International Court of Justice. The river flows from Bolivia into Chile through artificial ducts built by Chilean companies over a hundred years ago, and the suit is over the legality of the construction and the ownership of the waters. Last year, Chile filed a lawsuit asking the ICJ to “reaffirm” its right to equal access to the river’s water and when on Monday Bolivia decided not to counter-sue President Sebastián Piñera celebrated on Twitter saying this ratified the Chilean theory that the Silala is an international river.

But President Evo Morales answered yesterday saying Bolivia wasn’t admitting to anything. Bolivia is planning to submit a a counter-memorial to the ICJ instead of a counter-suit.

ARGENTINA: The family of incarcerated indigenous leader Facundo Jones Huala, who began a hunger strike on May 30th, said his health is rapidly declining after he decided to stop drinking water, although Argentine prison authorities say he is in good health. Jones Huala demands Argentine authorities allow him to perform a traditional Mapuche ritual that celebrates the new year. The permission was denied because it would require more than the maximum number of visitors allowed. Yesterday, representatives of the Association of Mothers of the Plaza de Mayo urged governor of the Chubut province Mariano Arcioni to allow for Jones Huala’s request. The organization latter said on twitter that Arcioni had agreed to allow the ceremony.

The Mothers also met with Jones Huala and asked him to put a stop to his hunger strike. Jones Huala is in jail waiting for a decision of Argentina’s Supreme Court over a petition to extradite from Chile, where he is accused of participating in an arson in 2013 during a protest for Mapuche traditional lands.