Why on Earth a Country of Laws and Borders?

Editor’s Note: An earlier version of this piece was published here. 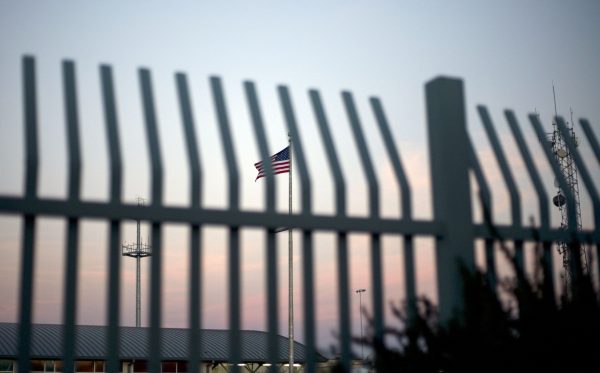 The American flag is pictured outside the Paso del Norte Port of Entry in El Paso, Texas, April 7, 2018. (Photo by Paul Ratje/AFP/Getty Images)

The point of anarchism is to create a better society for everyone. To realize anarchism, many agree, is to do away with power. Why? Because gravitating towards power, hierarchy, and subjugation sullies our politics and makes the aims of anarchism impossible.

Of course, even an egalitarian society might give rise to leaders and dominion. And people can be ambitious; they might influence others in myriad ways and inspire hierarchy. In fact, Robert Michels’ “iron law of oligarchy” expounds precisely on this tendency.

But whereas anarchists are wont to do away with hierarchy and any power that would sustain it, others believe humanity is at its best because of an innate drive for dominance and success, and outcompeting one’s neighbors. Nor is this sentiment just a part of the cultural ether.

Notoriously, sociobiologists of the 1960s employed alpha male chimpanzees to validate claims favorable to social Darwinism and other biological approaches devised to explain hierarchy among human societies. The science was supposed to shut the door on anarchism for good, but there were at least two problems.

One, Peter Kropotkin reminds us scientists are merely human; are the descendants of the haves instead of the have-nots; share the prejudices of their class; and/or serve the government. Two, anarcha-feminists altogether smashed the idea of arguing over “human nature.” They indicate such notions conflict with anarchism when truly understood.

Given the circumstances that define, say, the U.S. government’s ability to engage in national and international policy that drives migration to, and into, its borders, the question of power again arises, and so does the inclination to reduce state actions to blanket statements involving “human nature.”

One view is that the state is enforcing its borders and raiding businesses and homes not to stop any immigrants from entering the country, but to introduce ever greater precarity into the lives of those who reside among us and work jobs that help make the formal economy run (while contributing $11 billion dollars to the U.S. economy each year). The goal here is to scare people away from their constitutional rights and to drive them underground.

Of course, this is not reflected in the gambit propagated by the powers that be. “We” have a choice, claim Donald Trump and Jeff Sessions: the U.S. can be a country with laws, or one without borders. Also, claims Trump, a nation without borders is not much of a nation at all.

Anarchism provides a way forward for the rest of us who still care about creating a better society, not simply a country that demands borders and laws out of fallacious either-or arguments and tautological ruses. But to do away with the power that precludes a better society, we first must recognize that power for what it is.

When Sessions and Trump impose their immigration policies and practices on the rest of us, they seek to dominate us. Herein we find the power we ought to resist and abolish. It is, truly, a power that is prosecutorial against the most vulnerable.

And when Trump blames the Democrats for failing to cooperate, alleging they have forced his hand in separating children from their parents, he is seeking only to operate according to his own wishes, only to cooperate with those in compliance with his wishes.

Power is key here: Sessions and Trump seek dominion by exerting power over us. They get sufficient affirmation to justify their actions. Where? Among other examples, Fox News.

Additionally, the power to separate children from their parents, and to destroy families by way of law and border, instantiates yet another manifestation of the administration’s hierarchical leadership and coercive powers. Errico Malatesta described this coercive power of hierarchical leaders (i.e., “authority”) as the ability of specific individuals (e.g. Sessions and Trump) to “use social forces … the physical, intellectual, and economic powers of all” to make all conform and comply.

One countermeasure is to thwart ambitious leaders, or individuals, who strive to dominate the rest. As opposed to power, then, which we witness in the destruction of families at our border, anarchism gets expressed the in the successful, if short-lived, construction of spaces for solidarity, equality, and freedom, and the resistance to domination. Therefore, let us create (or multiply) such spaces and affirm them!

Anarchists understand that hierarchy and the exercise of power elicits the worst in people, perhaps especially in the likes of Sessions and Trump, who are in positions of power and outwardly very ambitious men. So why on Earth should we submit to the kinds of laws and borders that further advance the power that Sessions and Trump enjoy and exercise in order to coerce the rest of us into conforming and complying with their ambitions? No actual anarchist will assent to this.

Kropotkin states, “Far from … imagining men better than they are, we see them as they are; and that is why we affirm that the best of men is made essentially bad by the exercise of authority.” Sessions and Trump hardly qualify as “the best of men.” Even so, with their exercise of authority since the 2016 election, we have great proof that rotten apples not only spoil the bunch, but they also collect flies.

If we are to have political structures that shape our laws, then it is high time we horizontalize them. These structures must furthermore be egalitarian and consensual. Though it may not require an enduring optimism about human nature, our efforts to do away with hierarchy should provoke a wariness about the power detailed above. If not, we will not have to imagine a worst-case scenario too far off in the distance. Sooner rather than later, we will live it.