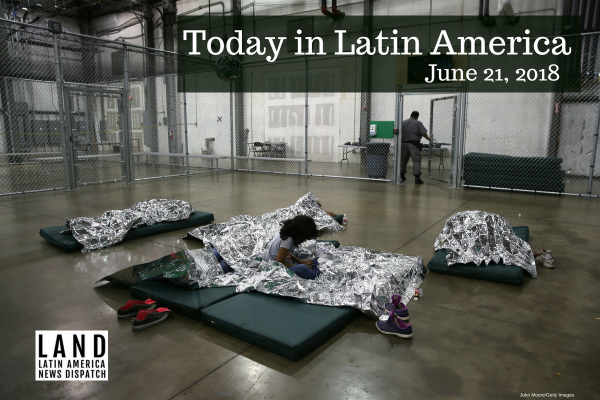 A girl from Central America rests on thermal blankets at a detention facility run by the U.S. Border Patrol on September 8, 2014 in McAllen, Texas. (Photo by John Moore/Getty Images)

UNITED STATES: President Donald Trump signed an executive order yesterday stopping his administration’s policy of separating children from their parents when they are detained illegally crossing the south border. For the most part, families will be kept together while they are in custody, their cases will be expedited and the Defense Department will be in charge of helping to house them. But the new executive order doesn’t end the “zero-tolerance” policy of criminally prosecuting all adults that cross the border without legal documents and doesn’t give a solution for the 2,300 children that have been separated from their parents since the policy began in May and for whom the administration doesn’t have reunification protocols put in place. The House of Representatives is expected to vote on two different bills that seek to formally end the family separation policy, but it might not be possible to rally enough Republican votes to pass the bill.

Meanwhile, Florida Sen. Bill Nelson and Rep. Debbie Wasserman Schultz attempted to visit a facility in their state, Florida, but were denied entry. Nelson accused the Trump administration of a cover-up.

MEXICO: Several bouts of violence apparently linked to drug trafficking have unusually touched Mexico City this week, up until now the capital had mostly escaped from the violence that affects other parts of the country. Yesterday, police officers responding to reports that drugs were being sold found two dead bodies, they were then attacked when they pursued suspects on bikes and killed two of the attackers and injured a third one when responding to shots. The police arrested 25 persons and confiscated five firearms, a car and sixteen bikes. Two days before, several dismembered bodies were scattered on an important avenue that crossed the city.

PUERTO RICO: Gov. Ricardo Roselló signed a bill yesterday allowing for the sale and privatization of the archipelago’s power company after an 11-year-long recession and last year’s Hurricane Maria hitting the company hard. The Puerto Rico Electric Power Authority is one of the largest U.S. public utility companies, Roselló tried to prevent criticism by including an article in the bill protecting the jobs of the more than 6,000 workers at the power company.

NICARAGUA: Multilateral organizations confirmed yesterday that they had received formal invitations by the Nicaraguan government to act as observers of the violent protests that continue to rock the country. Negotiations, where the Catholic Church was acting as a mediator, broke down on Monday when the government of Daniel Ortega was dragging its feet on sending out the invitations which multilateral organizations need to be able to act as formal observers. The Inter-American Commission on Human Rights, the U.N. High Commissioner for Human Rights and the European Union were invited. The director of the National School of Migration gave a public announcement yesterday reminding that the Nicaraguan constitution prohibits foreigners from intervening in the country’s political affairs.

The Nicaraguan Medical Association has accused some public hospitals of allegedly turning away the wounded due to orders from above. The government has denied giving out such an order.

VENEZUELA: The coalition of opposition parties rejected yesterday the intermediation of José Luis Rodríguez Zapatero, former president of Spain, between them and the government of Venezuelan President Nicolás Maduro. Lawmaker Juan Guaidó said at a press conference yesterday, “We don’t know if he’s serving as the government’s lawyer, as a spokesman or as a facilitator.” Rodríguez Zapatero responded saying he would continue to work towards peace in Venezuela.

VENEZUELA: The government occupied yesterday eight popular markets in different parts of the country and began taking control over another 21 arguing there are indications of speculation, hoarding of products and price meddling. The measure is supposed to be temporary.

PERU: Congress passed a bill on Tuesday allowing President Martín Vizcarra’s government to legislate on issues related to the economy, the fight against corruption and the protection of victims of socio-political violence for a special period of 60 days. Vizcarra was vice president until March when then-president Pedro Pablo Kuczynski was impeached.

BRAZIL: The country’s highest court acquitted on Tuesday night the Workers’ Party president Sen. Gleisi Hoffmann of charges of corruption and money-laundering. The case was part of the “Car Wash” probe that has uncovered billions of dollars in bribes. Hoffmann was accused of accepting more than $260,000 in illegal campaign contributions from corrupt contracts with Petrobras, the state-run oil company, but prosecutors unable to provide any evidence to substantiate the plea-bargain testimony that incriminated the senator.

ARGENTINA: The Executive Board of the International Monetary Fund gave a green light yesterday to a $50 billion stand-by loan for Argentina. The government of President Mauricio Macri will immediately receive $15 billion, half of which will be used for budget support, and the rest of the money will be available during the next three years subject to quarterly reviews. The decision to seek help from the IMF is very unpopular in Argentina, where many blame the bank’s austerity policies for the economic crisis of 2001.