Last week marked the launch of our 2018 congressional midterm elections weekly tracking poll of Latino voters. The poll is a collaboration between Latino Decisions and the National Association of Latino Elected Officials Educational Fund (NALEO EF). Over the next ten weeks, we will provide weekly snapshots of Latino political evaluations. In this effort, we will track how Latino voters are reacting to the dynamics of the midterm election. While Democrats are anticipating a “blue wave” this November, it is important to keep in mind that their path to victory runs through heavily Latino districts and states. Latino voters will play a pivotal role in this election, whether they stay home or turnout. This analysis considers the prospects of these two possibilities.

Whether a Democratic wave emerges or Republicans maintain control of Congress depends on one thing: the degree to which parties and candidates turnout their base. If Democrats are to prevail, then turnout among minority voters, including Latinos, must be elevated. This is the only viable path to victory given the nature of midterm elections and the demographic profile of the Democratic Party’s electorate. 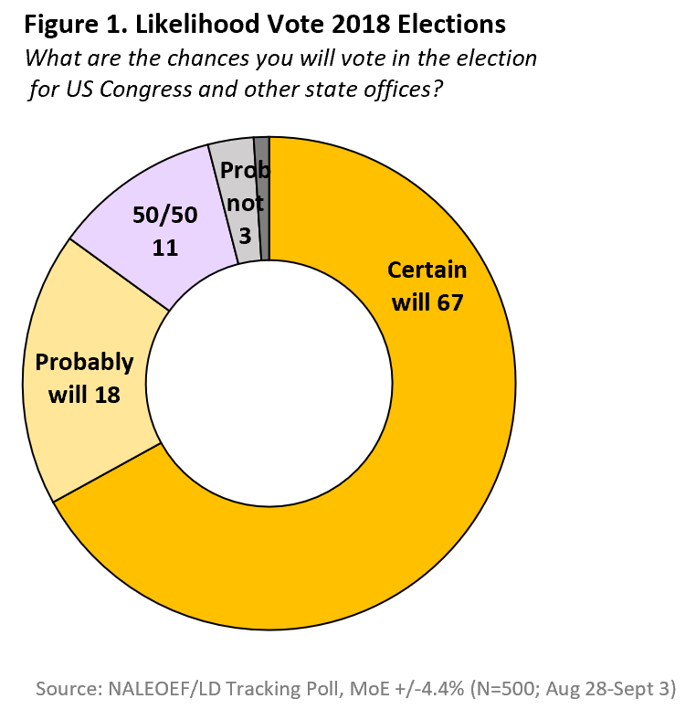 To that end, we first consider the propensity of Latino voter turnout in 2018. The NALEO EF/Latino Decisions poll includes two questions gauging Latino enthusiasm for voting in 2018. The first asks respondents to state the degree to which they are likely to vote in the November 2018 election (Figure 1). The second question asks respondents to assess the relative importance of this election in comparison to the 2014 midterm election (Figure 2). 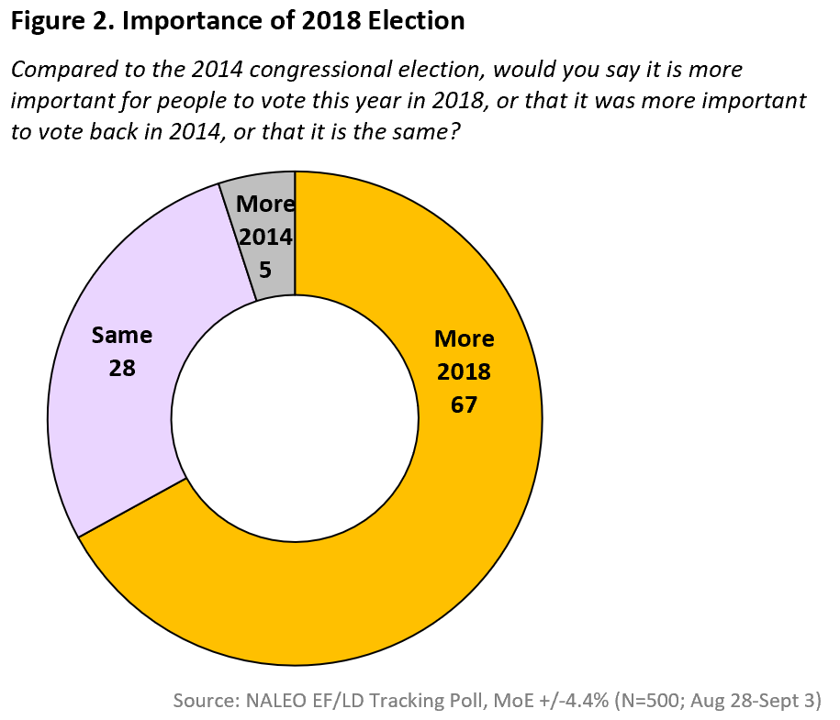 Latino voters are going into the midterm elections with a great deal of enthusiasm. Two-thirds say they are almost certain to vote in 2018 and another two-thirds believe this election is more important than the 2014 midterm election. While these preliminary results are encouraging, they do not guarantee that Latinos will show up on election day. As noted earlier, this is only the first week of our ten-week tracking poll and it is possible that these responses could trend downward over time.

Given Latinos’ longstanding support for the Democratic Party, is there anything Democrats can do to ensure they turnout on election day? According to research by political scientists Donald Green and Alan Gerber, who have extensively studied voting behavior, voter mobilization efforts are pivotal to increasing voter participation and the most significant boosts in turnout occur through in-person contact. Thus, to win the Latino vote and increase their turnout, political parties and candidates must engage them through direct mobilization efforts. In the survey we asked respondents whether they have been contacted and encouraged to vote by a political party, candidate or organization. A mere 41% reported that they have received such contact. In the coming weeks, we will closely monitor this figure since it is one of the best indicators of whether Latinos will be politically energized in 2018.

The failure of parties and campaigns to target Latinos is likely to lower levels of political awareness. Political awareness is another factor shaping turnout. Citizens who have difficulty differentiating between parties or candidates will simply disengage from politics. We analyze Latino levels of political awareness through the following question: “Some people feel like they know exactly what each party stands for and what each party would do if they had majority control of the Congress. Other people feel like the political parties don’t do a good job of telling voters why they should support them and vote them into office. Which comes closer to your own views about politics heading into the 2018 election?” In separate questions respondents were asked if they knew what the Democratic Party and their candidates stood for and if they knew what the Republican Party and their candidates stood for. 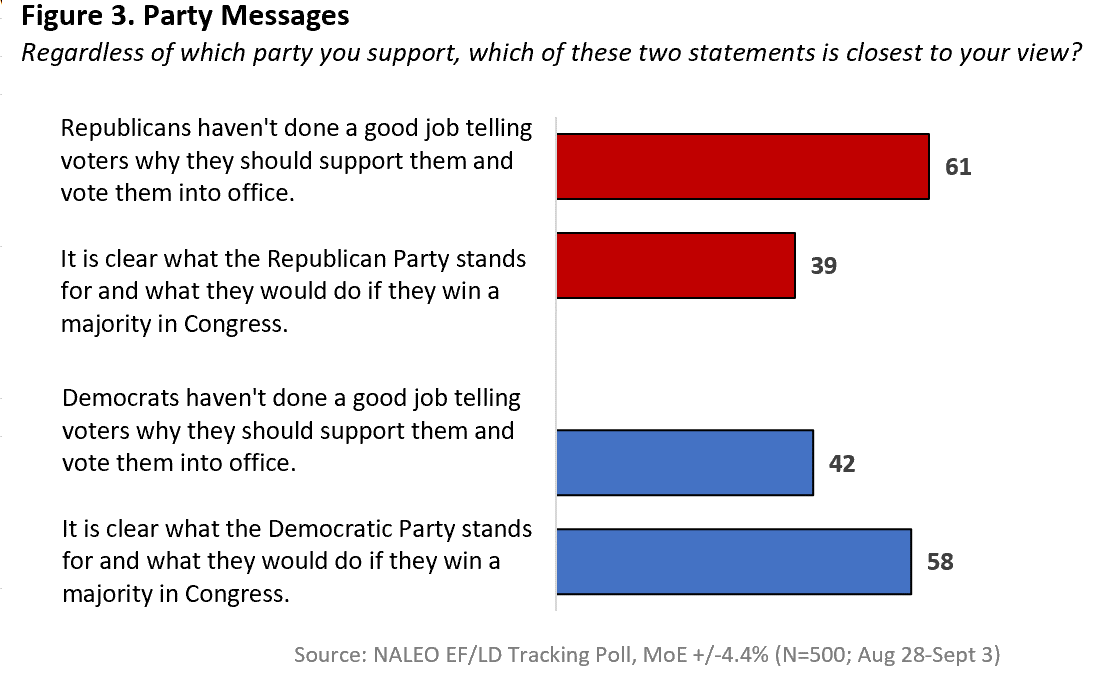 From the results, it is evident that the Democratic Party relative to the Republican Party has done a better job at communicating with Latinos their policy agenda. Nonetheless, there are significant numbers of Latinos who say that the parties have not done a good job of informing voters; 42% evaluated the Democratic Party negatively and 61% evaluated the Republican Party negatively. Taken together, these findings show that both parties have yet to develop an effective communication strategy for Latino voters. In a separate question, we asked respondents to assess the political parties in terms of reaching out to Latino voters. Specifically, we wanted to know if they felt the parties were “doing a good job,” “don’t care too much” or are “being hostile.” 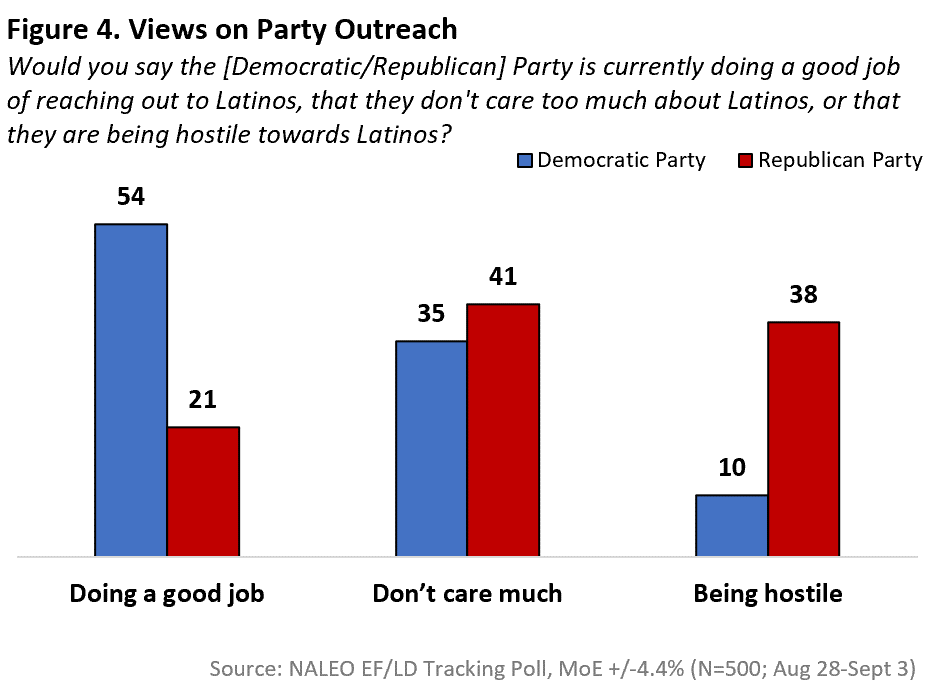 Figure 4 shows that 54% of Latinos say the Democratic Party is doing a good job in reaching out to Latino voters, while a mere 21% gave this evaluation of the Republican Party. About 79% of Latinos said that the Republican Party either doesn’t care or is being hostile. These figures should be alarming to Republicans, especially for GOP incumbents in districts and states with large numbers of Latino voters. Nonetheless, close to half (45%) of respondents judged the Democratic party negatively by stating that the party did not care or was being hostile to Latinos. Again, the data provides further evidence that both parties are under-serving Latino voters.

Heading into the 2018 congressional election, some Democrats are holding on to the belief that a “blue wave” of congressional victories is in the making. Others are more subdued in their assessment given the inconsistent turnout rates found among young people and minority voters. What is clear is that the Democratic path to victory runs through heavily Latino congressional districts and states. For example, in California alone there are seven competitive house races with sizable Latino populations. When it comes to the Senate, competitive races are taking place in Texas, Arizona, Nevada and Florida, states with large concentrations of Latino voters. Whether Latino voters over-perform or under-perform in this election remains an open question. The data gathered from our first tracking poll presents mixed results. On the one hand, Latinos are enthusiastic about the 2018 election. Unfortunately, significant numbers of potential voters are being ignored by the political parties and sizable numbers also display a sense of ambivalence toward the parties. If these negative evaluations continue trending upward, then there are reasons to believe Republicans will withstand the blue wave. If, however, the Democratic Party and candidates engage in direct voter mobilization efforts, a time-tested strategy, there is reason to believe the blue wave will be overwhelming.

Methodology. On behalf of NALEO Educational Fund, Latino Decisions interviewed 500 Latino registered voters nationwide from August 28 – September 3, 2018 and carries of margin of error of 4.4%. Each week a fresh sample of 250 registered voters will be added and combined with the previous 250 interviews to create a rolling average for each week, consistent with most tracking polls methodology. Respondents were randomly selected from Latino Decisions partner web panels and confirmed to be registered to vote. The survey was self-administered and available in English or Spanish at the discretion of the respondent. Data were compared to the best-known estimates of the U.S. Census Current Population Survey (CPS) for demographic profile of Latino registered voters and weights were applied to bring the data into direct balance with Census estimates.