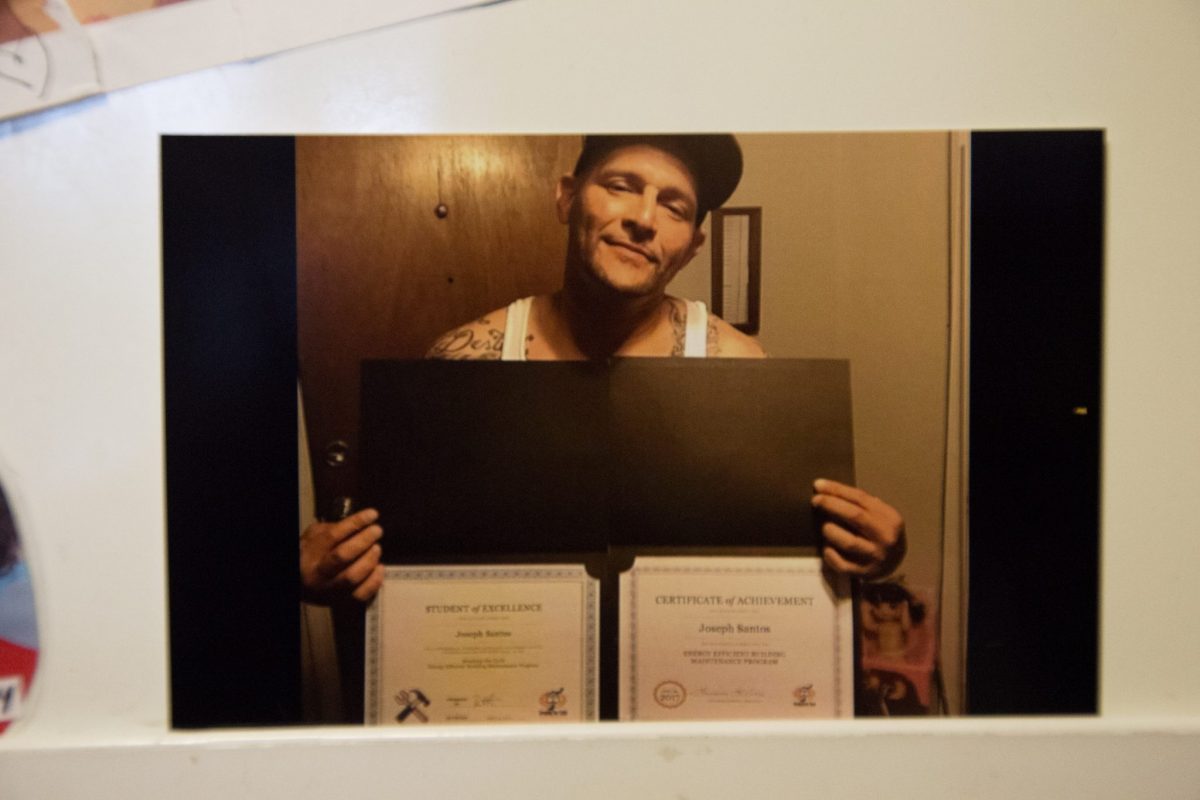 Image of Joey Santos holding up a certificate. (Photo by Priscilla Gaona/Latino USA)

A preliminary hearing was held on Thursday for Jonathan Roselle, the former South Whitehall officer charged with the shooting death of Joseph “Joey” Santos in Allentown, Pennsylvania. The judge decided that the case would go to trial.

Santos’ death on July 28 gained local media attention when a phone video of the incident went viral. During the Thursday hearing at an Allentown courtroom, the prosecutor reportedly showed graphic video footage of the moments leading up to the shooting, where Santos was seen jumping on and damaging moving cars. The video also showed the moment when Santos was shot. As the video played, members of Santos’ family started crying, some leaving the courtroom.

“It was the most disgusting and heartbreaking thing to see,” Make the Road PA’s Maegan Llerena Muñoz told Latino USA.“The family and Make the Road are super glad that the case is actually going to trial, everybody was a bit worried that the indictment would be where it ended and the judge would decide that it wasn’t enough to take it to trial, it felt like a relief.”

Make the Road has been working closely with Santos’ family.

Prosecutors declined to comment about the Thursday hearing. Roselle’s attorney Gavin Holihan told The Morning Call that his strategy was “to defend the charges as much as we can in a preliminary hearing. We don’t intend to waive it or ask for a continuance.” When Latino USA reached out to Holihan for a statement after the hearing, he said, “Officer Roselle was justified in the shooting.”

Santos, 44, is a native of New Jersey and had been to Dorney Park in South Whitehall Township, PA with friends before separating from the group. At approximately 5:44 pm, police responded to a call of a man walking in traffic and causing disturbances on a major street near the park. An eyewitness video of the shooting shows Santos walking on the street and being shot by the 33-year-old Roselle five times, while he had his hands up. It was later confirmed that Santos had been unarmed. Officer Roselle was placed on administrative leave then fired. He was released on bail. 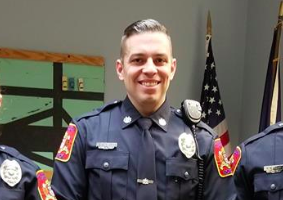 In August, Latino USA interviewed Arlene Figueroa, Santos’ wife, who said the family had to hold a closed-casket funeral because Santos was shot in the face.

“It’s been hard, it’s been it’s been a dream for me,” Figueroa said in her Patterson, NJ home.  “And honestly I have to tell myself constantly, tell my legs ‘left right left right’ because I know that my mind is not right.”

Figueroa and Santos had been married for 18 years.

Before the Hearing: A Grieving Family

Santos was described by his family as a loving man and caring father. When Latino USA spoke with Figueroa in August, she was emotional as she described him. Though it had been about two weeks since the death of her husband, Figueroa had yet to tell her 8-year-old daughter that “daddy” wasn’t coming home.

“I was just the overprotective mother and I don’t know how to tell this little girl, tell her that he’s not coming back because it’s going to destroy her,” she said. “I can’t look at that little face and just know that I’m going to be the one to her for the rest of her life. It hurts.” She said that her daughter, who is autistic, had a set routine with her father that has been disrupted. 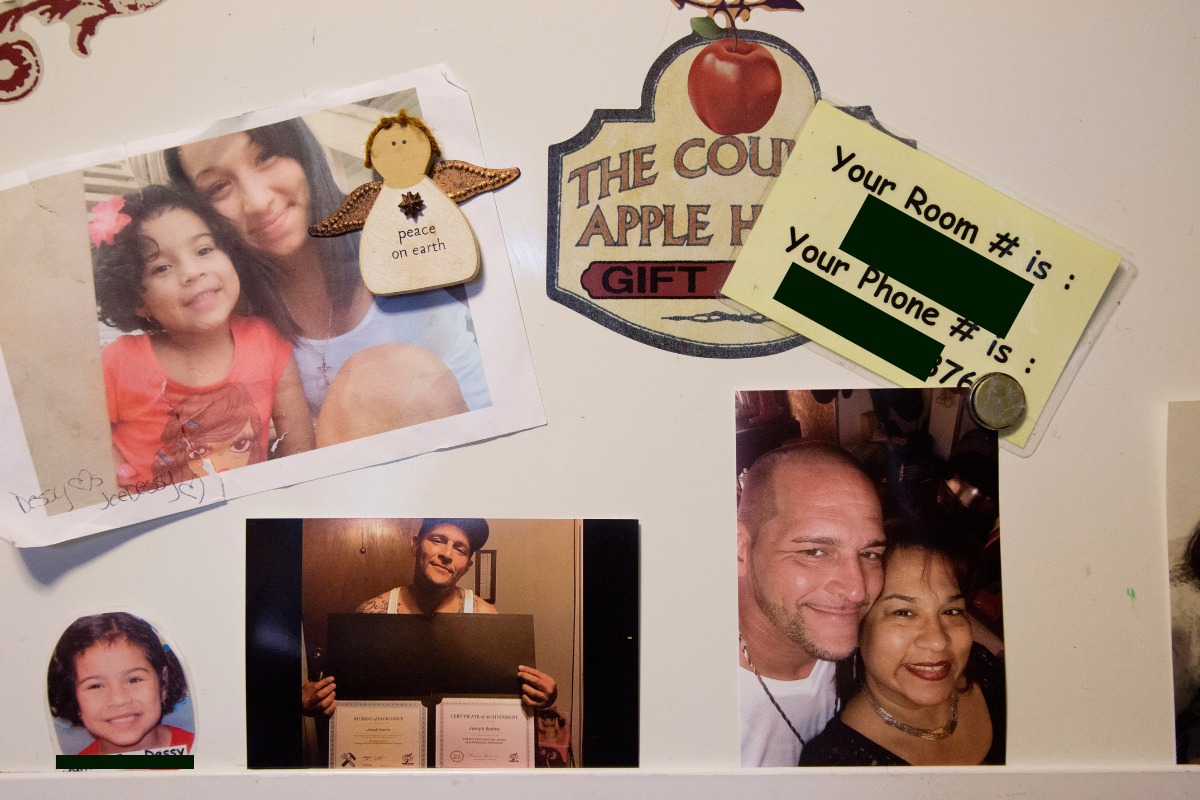 Figueroa’s living room was small with family pictures everywhere. Now, next to those framed happy family photos, there are posters asking for justice.

“He was a great father,” Figueroa added.

At one point, she described that while at the beach, his daughter wanted to play with teacups, and he played with her, without worrying if anyone was looking. Santos had also helped Figueroa raise her oldest daughter.

“You took him away from three beautiful kids that he had, four with my daughter because he said that he wasn’t her stepfather. He was the father that stepped up and that was his daughter,” she said.

Though her and Santos separated approximately one year ago, they co-parented, and he helped with the bills. 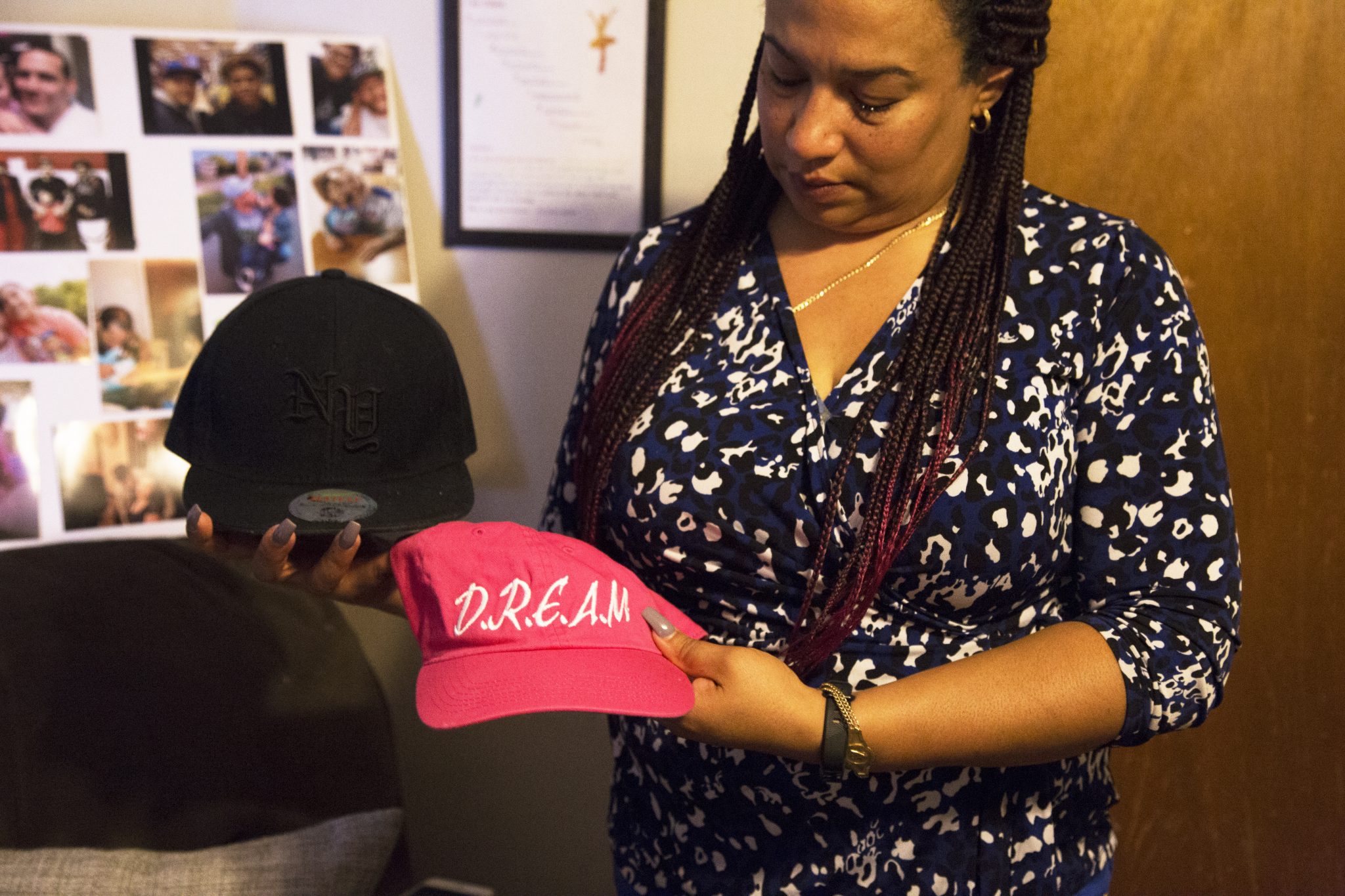 “You know, he started his own clothing line DREAM, which stands for ‘Drugs Ruin Everything Around Me’ and he was selling them like crazy. But more than selling it, he was also giving them away to people,” she said. “If he saw somebody that they didn’t have the money or, you know, he knew that drugs had touched their lives, [he’d say,] ‘Here. You’re blessed with this.'”

The Aftermath of the Shooting

Figueroa was at home cooking for Santos and her family when she heard the news of what had happened after a friend of Santos called. It was a day after the shooting. She said that she didn’t believe it at first, so she tried to call Santos.

“I called Joey’s phone and I was told by the person that picked up the phone ‘who’s this?’ and I said, ‘This is Joey’s wife. This is the mother of his daughter. Where’s my husband?’ And they said that they were sorry to tell me, but that Joey got shot five times at Dorney Park yesterday. And I said, ‘No, what? No. No.” 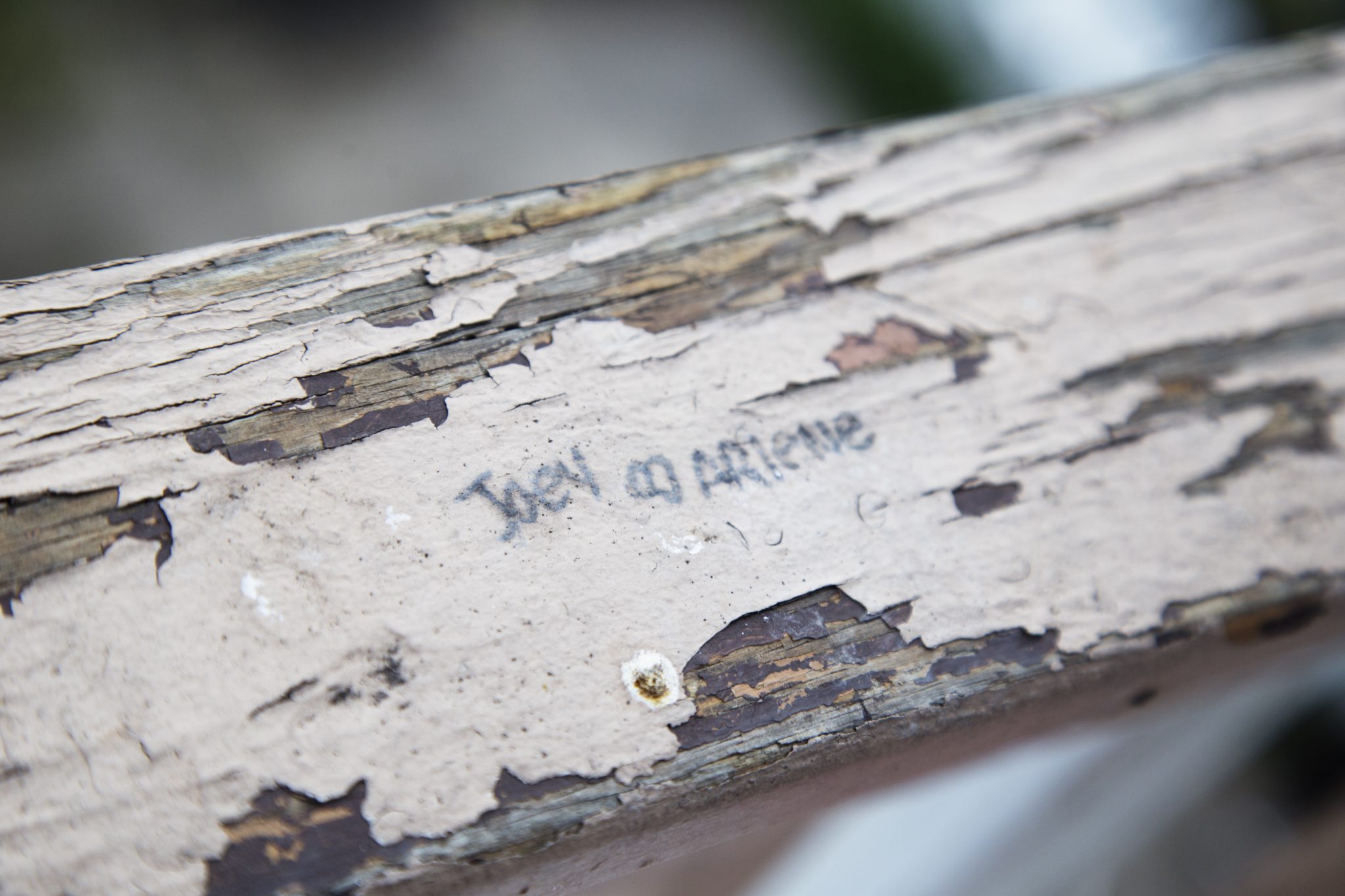 A writing made by Joey Santos on Arlene Figueroa’s back porch when they first started dating over 18 years ago. (Photo by Priscilla Gaona/Latino USA)

She drove to the South Whitehall Police Department station and was told that the body “wasn’t ready.” At one point, when she said her daughter’s name, the two officers assisting her looked at each other. Joey had his daughter’s name tattooed on his body.

She then contacted Make the Road PA days after the incident hoping to find answers.

Shortly after the indictment for voluntary manslaughter was announced on August 7 during a press conference with Lehigh County District Attorney Jim Martin, people in the community organized a rally to support Roselle.

Make the Road also held a rally in support of Santos.

“My little girl doesn’t have her father. That officer took him from us. We will be here as long as it takes until we see Justice for Joey.” Arlene, #JoeySantos’ wife of 18 years#Justice4Santos pic.twitter.com/VHNxZbsvlu

“It was great that we had an indictment within the first weeks. That was phenomenal and I think was a great first step for justice for Joey,” Llerena Muñoz told Latino USA during the August interview. “But the justice that we’re seeking is not even just for him. This is like for all of us because we’re literally always targeted. Only 30 percent of cops that are indicted are actually convicted.” 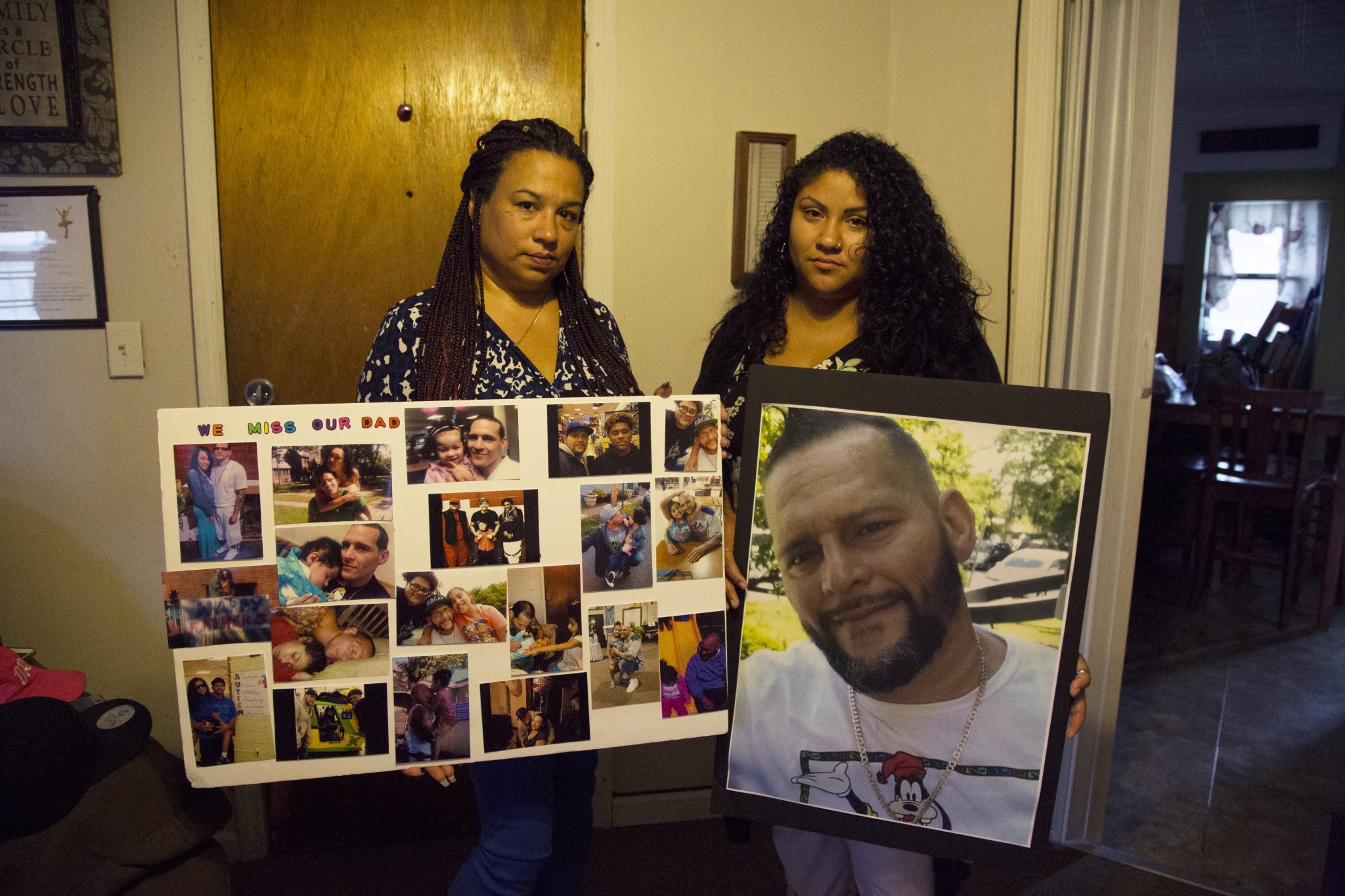 Figueroa and Llerena Muñoz have been working closely ever since the initial call was made.

“Getting to know the family has been amazing because they’re amazing people and they love Joey so much. And Joey clearly loved them so much, and so being able to show people that this is who he really was as a person,” said Llerena Muñoz. “We want people who can see us and not criminalize us and just see us as normal human beings, and that’s so hard.”

When Figueroa was asked what does justice look like, she just had one word: “Prevention.”

“We want everyone to show up consistently to his trial to show that we are dedicated to getting a conviction,” she added. “This man was a phenomenal man. Like, they took away a good person.”

The beginning of the trial is set for November.