By Jo-Marie Burt and Paulo Estrada 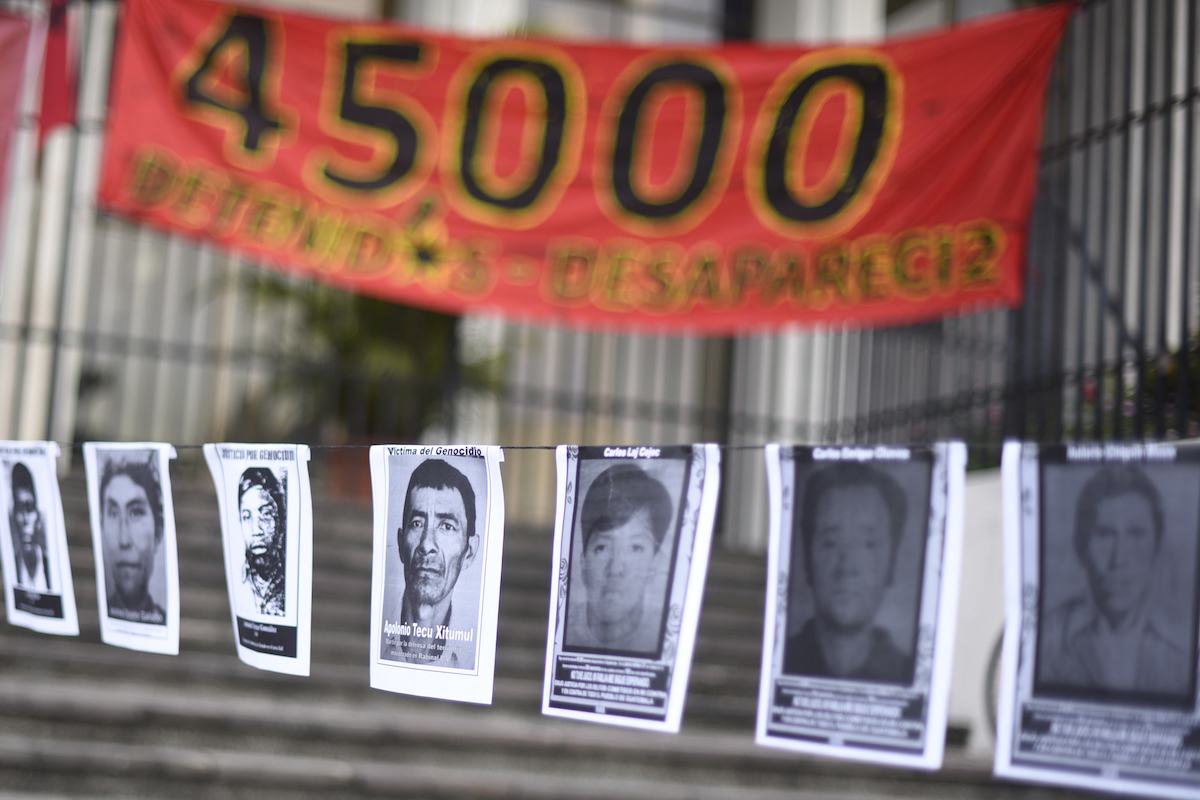 Portraits of missing persons within Guatemalan internal armed conflict, are displayed by human rights’ organization “Hijos” during a protest at Justice square in Guatemala City on April 6, 2018. (Photo by JOHAN ORDONEZ/AFP/Getty Images)

Five years after the first genocide trial in 2013, and more than 30 years after the events, the trial against Mauricio Rodríguez Sánchez on charges of genocide and crimes against humanity is wrapping up. Closing arguments have been heard and the final hearing, during which the defendant will have an opportunity to address the court, is scheduled for the morning of September 26. The trial court is expected to deliver its ruling later that day.

The Attorney General’s Office recapped the evidence that it says proves Rodríguez Sánchez’s criminal responsibility for genocide and crimes against humanity against the Maya Ixil population, and called on the court to impose the maximum sentence of 50 years for genocide and 30 years for crimes against humanity. A controversial Constitutional Court ruling partially suspended the 2013 proceedings, which vacated the judgment that acquitted Rodríguez Sánchez of similar charges, while finding co-accused Efraín Ríos Montt guilty.

As the day of the final sentence nears, tension over the possible outcome is rising. The high-profile grave crimes trial is concluding just as a constitutional crisis over the fate of the UN-backed International Commission Against Impunity in Guatemala (CICIG) escalates. Maya Ixil authorities were present at the hearings when the Attorney General’s Office and the co-plaintiffs delivered their closing arguments on August 31 and September 7. The co-plaintiffs appeared in court wearing the traditional Maya Ixil ceremonial dress, which picked up on a theme widely circulated during the first genocide trial: “We are all Ixiles.”

In the meantime, several retired military officials and military commissioners were present in the courtroom when Rodríguez Sánchez’s lawyers presented their concluding arguments on September 12. At the end of the hearing, some of them engaged in verbally aggressive behavior towards the representatives of the victims.

For background on the trial to date, see “The Rodríguez Sánchez Genocide Retrial: Highlights of the Proceedings.”

Attorney General’s Office: Rodríguez Sánchez Knew About the Genocide and Failed to Stop It

Public prosecutor Erick de León began by stating that official documents prove that Rodríguez Sánchez was the chief of military intelligence of the General Staff of the Guatemalan Army between March 23, 1982 and July 31, 1983. The de facto president during this period, Efraín Ríos Montt, appointed him. Ríos Montt was also being prosecuted for a second time for the Maya Ixil genocide, but the case was closed following his death in April of this year.

According to De León, Rodríguez Sánchez was responsible for specifying who the “internal enemy” was in the context of the counterinsurgency war and devising plans to counteract these groups. He stated that various military documents, particularly the Victoria 82 Campaign Plan and the Sofía Operations Plan, prove that Rodríguez Sánchez had identified virtually the entire Maya Ixil population as guerrilla collaborators and therefore as an “internal enemy” that had to be “annihilated.” De León said that during the 17 months that Rodríguez Sánchez was head of military intelligence, at least 90 villages in the Ixil region were partially or completely destroyed.

De León argued further that the military persecuted the Maya Ixil population that had fled into the mountains to escape military attacks. According to De León, the Firmeza 83 Campaign Plan classified the displaced population as an enemy, thereby justifying their persecution through bombing campaigns, destruction of their crops, and inducing famine. He said these were not guerrilla fighters, but noncombatant civilians, including women, children, and the elderly. De León argued that the evidence demonstrates that the military had studied the displaced population, identified it as the enemy, and attacked it, revealing the intention to annihilate the group in whole or in part.

Rodríguez Sánchez knew about and could have stopped the genocide against the Maya Ixil, said De León, but he did not do so.

Co-Plaintiffs: Racism and Discrimination Are the Roots of the Genocide

On September 7, the attorneys for the complainants, Edgar Pérez Archila of the Human Rights Law Firm, who represents the surviving victims of the Association of Justice and Reconciliation (AJR), and Héctor Reyes Chiquin, staff attorney at the Center for Human Rights Legal Action (CALDH), gave their closing arguments. Pérez, Reyes, and their co-counsel wore the ceremonial dress of the Maya Ixil at the request of their clients.

Pérez reiterated De León’s argument that genocide was committed in Guatemala against the Mayan Ixil people, emphasizing the historic racism and discrimination against the indigenous people of Guatemala. He made specific reference to the testimony of Marta Elena Casaús, author of the book Lineage and Racism in Guatemala. “Racism and discrimination are the roots of the genocide in Guatemala, as Marta Casaús explained in her testimony,” he said. He also recalled the testimony of military expert Héctor Rosada Granados, who told the court that the military saw the Ixil as “problematic.” “When the land-owning ladinos saw the Ixiles begin to organize,” he said, “they told the army that they were insurgents.”

Pérez highlighted witness testimonies about the many ways the military attempted to destroy the Ixil people, through massacres, forced displacement, torture, sexual violence, and enslavement. The army sought to destroy the Maya Ixil population not only by killing them, said Pérez, but by destroying their collective way of life. The Maya Ixil “were persecuted, their homes and their corn fields were destroyed, they had no food or medicine, they were bombed… People died of hunger, from bullets, and from fear. Babies died because their mothers had to cover their mouths [so they would not cry]…. Others died due to stomach infections, lack of medical attention, or from the cold….” Rodríguez Sánchez was responsible for the orders that resulted in these attacks, said Pérez, and was privy to detailed intelligence reports on their implementation.

Héctor Reyes of CALDH presented a brief timeline of the genocide case, which started with the first complaint against the military high command for genocide in five distinct regions in 2000. The case failed to advance. In 2007, CALDH pursued new tactics, suing the government to access several declassified military documents, including Firmeza 83 and Plan Sofía. This led the organization to refine its analysis and focus solely on the Maya Ixil genocide. The case was transferred to a high risk court in 2011, and eventually, the trial opened in March 2013 against Ríos Montt and Rodríguez Sánchez. After the Constitutional Court partially suspended the proceedings, which vacated the 2013 ruling, the retrial faced repeated delays. Ríos Montt died in the midst of his second trial.

For Reyes, the army engaged in criminal acts that constitute the crime of genocide, which were possible because of the actions and omissions of Rodríguez Sánchez. Reyes joined Pérez and the Attorney General’s office in asking the court to find Rodríguez Sánchez guilty and sentence him to 50 years in prison for genocide and 30 years in prison for crimes against humanity.

The Defense: Rodríguez Sánchez is Not Guilty

Rodríguez Sánchez’s defense lawyers delivered their concluding arguments on September 12. Their core arguments centered on the claim that Rodríguez Sánchez did not have command over the army, and that the case presented by the Attorney General’s Office lacked consistency and did not prove his responsibility beyond a reasonable doubt.

The defense also claimed that the cases of sexual violence were isolated cases, not part of a systematic pattern of abuse, and that they were the responsibility of the troops, not commanding officers. They also challenged the authenticity of official documents, saying that they are just “copies,” and referred to the reports of the Commission for Historical Clarification and the Recovery of Historical Memory project (REHMI) as biased and overly influenced by foreigners.

The defense also asserted that the defendant was not the official responsible for characterizing the enemy as “insurgents.” That was the responsibility of the G5 Civil Affairs Officer, the defense argued. According to the defense, yet another member of the Army General Staff, the G3 Operations Officer, was responsible for any “excesses” that occurred in the Ixil region.

The defense concluded by praising Rodríguez Sánchez as a man of integrity and called upon the court to find him not guilty on all counts.

Final Remarks of the Victims’ Organizations

The hearing ended with brief remarks from representatives of AJR and CALDH. Edwin Canil, president of AJR, told the court that members of the organization, which is dedicated to achieving justice for civilian victims of the war, “have suffered threats, defamation, intimidation and harassment by associates of the accused.” He asked the court to order measures for victim and witness protection, and also measures to guarantee the non-repetition of atrocities.

Francisco Soto, the executive director of CALDH, told the court that victims’ demands for justice do not lead to societal polarization, but that the accused seize on this claim in order to delegitimize the victims and the court itself.

Tension at the End of the Hearing

Several former military officials attended the hearing to show support for Rodríguez Sánchez. They included members of the Guatemalan Association of Military Veterans (AVEMILGUA) and former military commissioners, as well as individuals from the Ixil region.

At the end of the hearing, several of the commissioners and some of the Ixil civilians approached Edwin Canil of AJR, grabbing him by the arm and insulting him. At the same time, retired colonel and member of AVEMILGUA Marco Antonio Orozco Cifuentes confronted Francisco Soto, saying “the money is about to run out.”

Rodríguez Sánchez will have an opportunity to address the court on September 26 at 8:30am local time. The verdict is expected later on Wednesday.

Jo-Marie Burt is an Associate Professor of Political Science and Latin American Studies at George Mason University. She is also a Senior Fellow at the Washington Office on Latin America (WOLA). Paulo Estrada is a human rights activist, archaeology student at San Carlos University, and civil party in the Military Diary case.