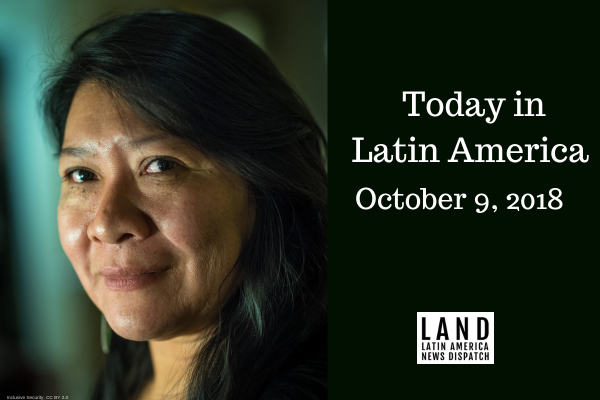 BRAZIL: While the far-right had a near victory in Sunday’s election with presidential candidate Jair Bolsonaro entering the runoff election as the frontrunner, indigenous and transgender candidates came out ahead in other elections. Lawyer Joênia Wapixana won a seat in Congress, making her the first indigenous person elected to that position since 1982. Wapixana campaigned for more land for indigenous people.

Erica Malunguinho was elected as a state representative in São Paulo, becoming the first transgender candidate elected to that position. Malunguinho, of the Socialism and Liberty Party, is a history and art teacher. During the campaign, she promised to push for tourism in indigenous regions to stimulate the economy and fight racism.

The conservative Bolsonaro has been a controversial character during the race and has infuriated minority groups throughout Brazil due to his racist, sexist and homophobic comments. Bolsonaro survived a stab to the stomach after being attacked during a campaign rally on September 7.

MEXICO: A Mexican couple confessed to killing 20 women during a hearing on Sunday.  The couple, known only by the first names of Juan Carlos and Patricia, admitted to murdering the women, performing necrophilia, mutilating and selling parts of their bodies in the suburb of Ecatepec in Mexico City. Psychiatrists reported that both suffered from mental illnesses and that Juan Carlos could be a psychopath. The trial triggered protests against femicide.

UNITED STATES: A Falcon 9 rocket from Elon Musk’s SpaceX company sent an Argentinian satellite into space from a launchpad in California. The Argentinian Earth-observation satellite SAOCOM 1A carries a high-resolution device used for emergency management during disasters and land monitoring. The SAOCOM 1A is one of two satellites that Argentina plans to launch in collaboration with an Italian space agency and SpaceX.

UNITED STATES: Three years after an FBI and police crackdown against the MS-13 street gang began, 49 members have been convicted in Boston and 60 MS-13 members were arrested in January 2016; most of those still awaiting sentencing will be tried this month. Residents of East Boston still organize protests outside the police precinct in demand for peace and safety after a streak of killings and attempted murders by the MS-13 instilled fear in a neighborhood with a strong Latin American presence.

TRINIDAD AND TOBAGO: The Industrial Court ruled in favor of the Oilfields Workers’ Trade Union yesterday, preventing the state-owned oil company from laying off 3,400 workers. The union argued that the company, Petrotrin, did not consult properly with workers before deciding to shut down the refinery. Petrotrin was preparing a total of $2.6 billion in payouts to workers, planning to close Nov. 30. Now both parties await a final court decision expected early next month.

BARBADOS: The head of a medical school in Barbados was recently arrested and chargedfor cheating students out of thousands of dollars and falsely promising them spots at universities in China and the United States. Staff said they had gone three months without pay and the campus lacked critical resources like food, electricity and running water. CEO Gopi Venkat is also wanted in India; at his consulting firm several colleagues that recruited students for the school have been arrested.

REGIONAL: Heavy rains killed at least 13 people in Honduras, Nicaragua, and El Salvador over the weekend. Thousands more had to leave their homes to escape flooding, landslides, and more torrential rain.

NICARAGUA: The government published two new laws in the official register that will empower it to track financial information and migratory movements of individuals. Laws 976 and 977 of the Financial Analysis Unit allow the collection of information by government agencies about citizens, companies, and non-profit organizations. The UAF was created to target money laundering, but these measures are widely seen as “political weapons” against those who oppose President Ortega.

THE ANDES AND SOUTHERN CONE

PERU: Jorge Muñoz, the center-right mayoral candidate, is poised to become the next mayor of Lima as the results from Sunday’s election continue to roll in. Right-wing populist Daniel Urresti led the polls until just days before the election. Urresti was acquitted Thursday after he was accused of the murder of journalist Hugo Bustíos in 1988.

VENEZUELA: A member of the Caracas City Council – who was arrested last week on suspicion of his involvement in a failed drone attack against President Nicolás Maduro – killed himself yesterday, according to Venezuelan authorities. Fernando Alberto Albán Salazar jumped from a police building ahead of a court hearingscheduled the same day. The Venezuelan government considers the drone attacks in August an assassination attempt.