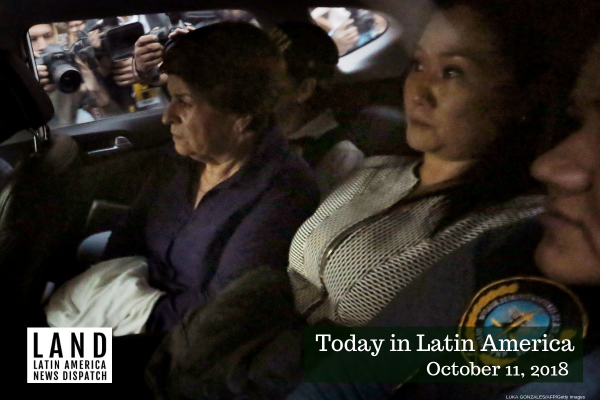 Peruvian opposition leader and daughter of disgraced ex-president Alberto Fujimori, Keiko Fujimori (2-R), is transported under custody in a police vehicle outside a police facility in Lima on October 10, 2018. (Photo by Luka Gonzales/AFP/Getty Images)

PERU: Former presidential candidate Keiko Fujimori and 19 members of the conservative Fuerza Popular Party were detained yesterday for alleged money laundering. She is being investigated for alleged illegal contributions amounting to $1 million from Odebrecht to her presidential campaign in 2011.

Fujimori is the daughter of former president Alberto Fujimori who was last week ordered to return to jail for a 25-year sentence for human rights abuses. In a handwritten letter published on her Twitter account claimed to be a victim of political persecution.

U.S./COLOMBIA: In a handover ceremony at the Colombian embassy in Washington yesterday, the FBI presented Ambassador Francisco Santos with 27 pre-colonial indigenous artifacts stolen by a prolific private collector from Indiana. They included ceramic pottery from the Caribbean coast and southern Nariño highlands, though no information has yet been provided as to their specific cultural origin.

THE MEXICO/U.S. BORDER: Nearly 30 environmental laws will be waived for the construction of the border wall between the United States and Mexico the Department of Homeland Security (DHS) announced yesterday. Among those listed are laws relating to endangered species, Native American rights, and clean water. DHS claims that this area of the border, known as the Rio Grande Valley, features a high level of illegal crossings—almost half for fiscal year 2017.

MEXICO: Brazilian prosecutors accused their Mexican counterparts of delaying trials against public officials known to have received bribe monies from construction company Odebrecht. Among the implicated officials is Emilio Lozoya, former CEO of state-owned oil company PEMEX’s, who allegedly received $10 million at a time when he was the top campaign official for outgoing president Enrique Peña Nieto.

NICARAGUA: Protester Carlos Bonilla López was sentenced to 90 years in jail for allegedly murdering a policeman and for trying to injure other four during a student demonstration against President Daniel Ortega. However, he will only spend 30 years in prison, a limit established in the law. Human rights organizations have warned that over 300 people are political prisoners in the country.

EL SALVADOR: The General Attorney’s Office is looking to start a trial against a person presumably involved in the 1986 kidnap of Armando Durán by paramilitaries. In 2016, after the Amnesty Law was eliminated, the victim sued former President Salvador Sánchez for the 37-day long kidnapping. The case, considered as a war crime, involves five commanders of the guerrilla.

COLOMBIA: Some 400,000 public and private university students from across the country took to the streets yesterday to protest education budget deficits. Starting today, student organizations plan to initiate a nationwide university strike that will last through Oct. 21. Their demands include a progressive increase in education spending, starting with $1.6 billion in next year’s budget.

PARAGUAY: Taiwanese President Tsai Ing-wen welcomed Paraguay’s President Mario Abdo Benítez with an unprecedented military drill that simulated an attack by Chinese forces. The diplomatic event is part of Benítez visit to the island as symbol of the support of Taiwan, which is looking for international allies amidst tensions with China.

BRAZIL: Authorities said yesterday they suspect the $16 million in luxury items seized from the vice president of Equatorial Guinea’s delegation last month were purchased with public funds embezzled from the African nation’s coffers. The Equatorial Guinean embassy has said the seizure violated the norms of international diplomacy.