A Refugee Community Gets Its Saint 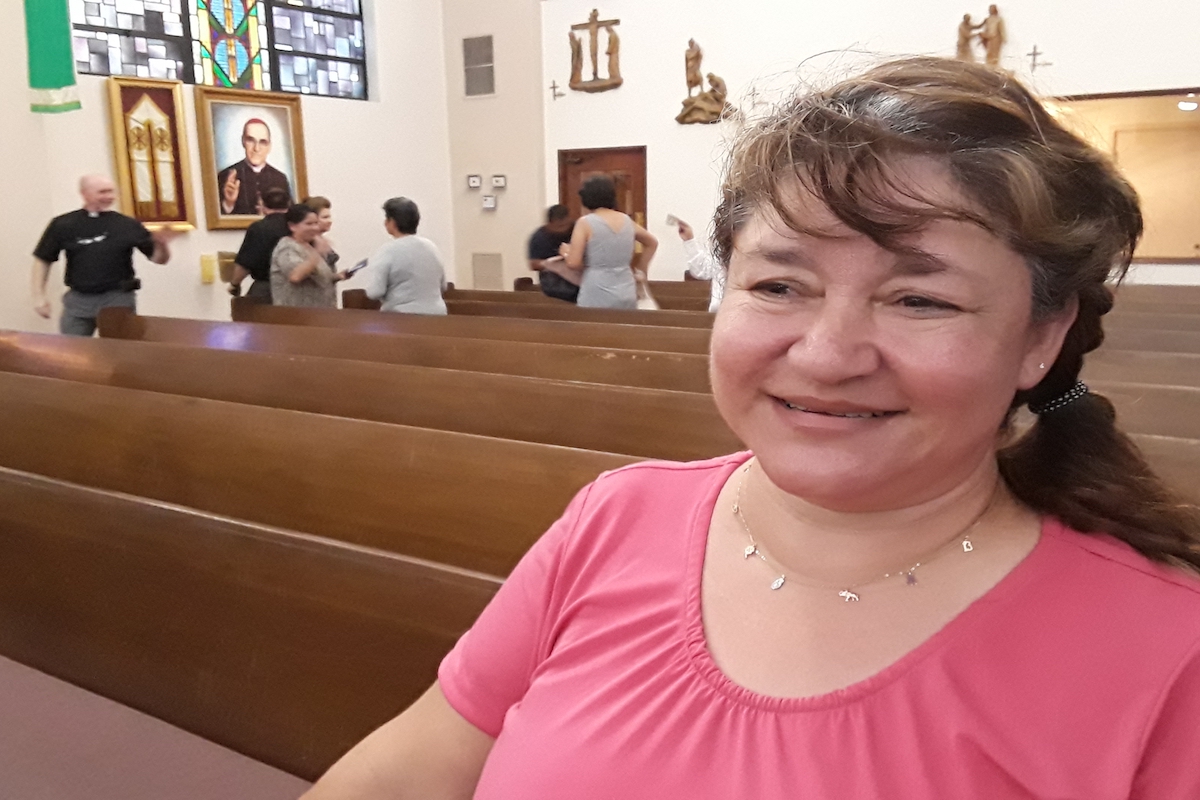 Mabel Flores is one of a group of 55 parishioners from St. Patrick church in Los Angeles who will travel to Rome for Oscar Arnulfo Romero’s canonization. In the far wall, Romero’s portrait hangs in the church, along with some of his ceremonial clothing. (Photo by Pilar Marrero)

LOS ANGELES – Mabel Flores was only 12 years old in 1980 when the Archbishop of San Salvador Oscar Arnulfo Romero was assassinated by government security forces while celebrating mass at Church of the Divine Province in that city, the capital of El Salvador.

This coming Sunday, October 14, Romero will be made a saint by Pope Francis, 38 years after his death, a moment in history that many of his followers in the Salvadoran immigrant community here in the United States are celebrating. Mabel will be in Rome to see it with her own eyes.

The Salvadoran woman, now 50 and living in Los Angeles, counts herself among the poor and prosecuted that Archbishop Romero talked about in his homilies. She calls him “a warrior for us.”

“Since I was a kid I was his follower,” Mabel tells Latino Rebels, while standing between the pews of St. Patrick Catholic Church in North Hollywood. “My mom always listened to his mass on the radio. He visited the poor, people believed in him and his message was so beautiful.”

Mabel had to leave El Salvador when she was 17 years old, in the middle of a bloody civil war that lasted more than a decade, killed over 100,000 people and displaced many more. Her memories of leaving home and migrating to the United States seeking asylum still make her tear up.

“We suffered greatly. The war displaced us from our towns and I was so young when I had to migrate to provide for my mother and sister,” Mabel says. “Thanks to God I have survived and thrived, and now I am going to Rome.”

She makes a living as a homecare worker for the elderly and cleaning houses. Still, she got together enough money to pay for the trip, which she will take along with her parish priest and 54 others from her church, most of who are Salvadoran immigrants.

The canonization of Romero was expedited by Pope Francis after inexplicable delays by previous pontiffs, and it feels like a vindication for some in the Salvadoran community.

“I never wanted to go to the Holy See,” says Mabel, who considers herself a devout Catholic. “It wasn’t really that interesting to me. It felt distant. But now that they’ve recognized him I feel closer to the Church.”

Of course, Romero did a lot more than visit the poor. A somewhat conservative priest when he was made Archbishop of San Salvador, the killing of his friend and activist priest Rutilio Grande in 1977 by government forces pushed him towards a more active defense of his flock.

After that event, the Archbishop took a prominent role in denouncing violence, disappearances and killings. Most of the violence came from the government or government-sponsored death squads, trained and financed by the United States, intent on squashing left-wing guerillas and social movements of any kind, fueled by poverty and injustice.

Leysy Abrego, an associate professor of Chicano-Chicana Studies at the University of California Los Angeles (UCLA) is herself a daughter of the diaspora created by that war and today she studies their experience in the United States.

For Abrego, the canonization of Romero speaks to the achievements and failures of her country of origin, and the role played by her adoptive one.

“I do think he is very significant to the Salvadoran people,” she says. “He is still an important voice in our history representing the courage to speak out against military violence and U.S. intervention and he did it from such a loving place, for his people, risking his own life, that it earned him an important spot in history and Salvadoran culture.” 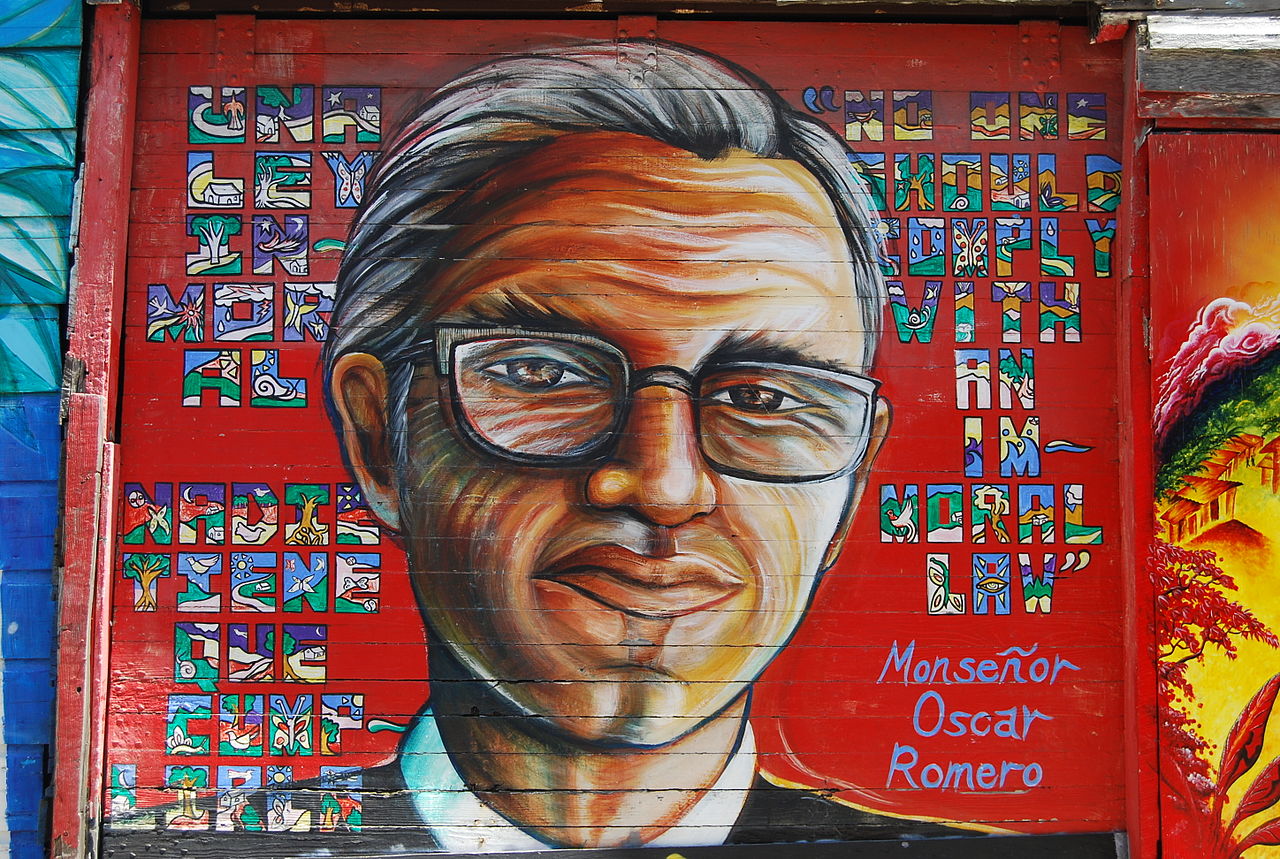 Abrego points to the current situation in El Salvador, where gang violence fueled by poverty and a breakdown of the institutions still sends thousands fleeing, even under a left-wing government.

“A lot of the things he fought for never happened,” she adds. “There has been little opportunity to fulfill those possibilities of well-being that was promised after the peace accord. Poverty and inequality continue to thrive and the drug war pushed by the U.S. has been invested primarily on securitization. It has been a big failure.”

Back in the streets of Los Angeles, the city with the most Salvadorans outside of El Salvador, several churches in the Pico-Union and North Hollywood areas are preparing to celebrate the canonization. Close to 100 people from two parishes are traveling to Rome but many others are staying home to participate in the all-night vigil and broadcast of the event. There will also be masses in his honor and educational photo and art shows meant to introduce “San Romero” to the new generations that don’t know him well.

In St Thomas Apostle, a church in the middle of Pico-Union, the city’s original Salvadoran enclave, the Sunday before the great event already feels like a celebration.

Families are enjoying the afternoon in the church patio and a portrait of Romero hangs inside the vast but very simple church. A relic belonging to the slain bishop was just placed below the portrait: a bishop miter that was used by him in life. Several of his possessions are in Los Angeles, in the hands of people who knew him or worked with him: the microphone he used for the masses, his handwritten last homily, pieces of his clothing stained with his blood.

“Please come to the vigil,” says a woman handing out pamphlets that promise “two large screens” to watch the broadcast from Rome. Others sell t-shirts, crosses, and prints with his image, and that of Rutilio Grande, who is also on his way to canonization by Pope Francis.

It will be a big celebration, and at least in this part of Los Angeles, many will be awake all night watching a man who is a symbol of their historic plight being formally recognized by the institutional Church. But for many of them, he has been a saint all along.

Pilar Marrero is an independent journalist based in Los Angeles who has covered the Salvadoran refugee community since the 1980s. She tweets from @PilarMarrero.