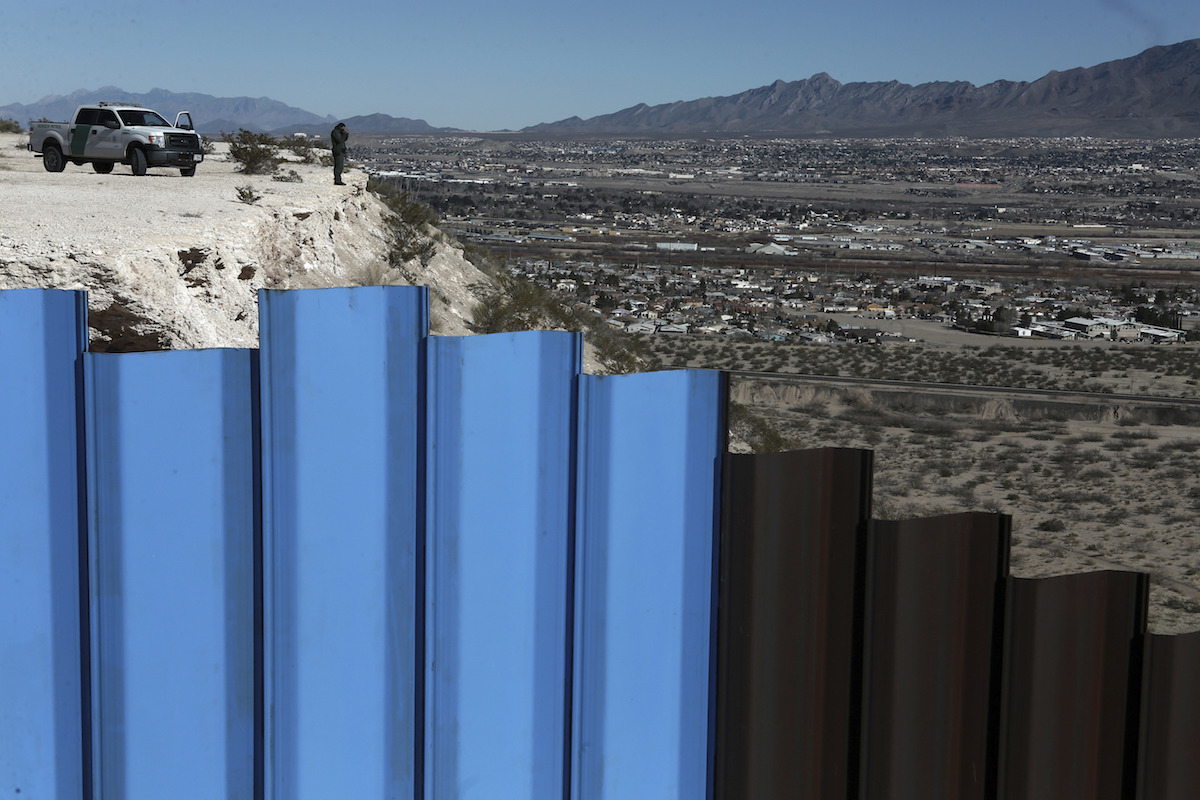 In this January 25, 2017, file photo, an agent from the border patrol, observes near the Mexico-U.S. border fence, on the Mexican side, separating the towns of Anapra, Mexico and Sunland Park, N.M. (AP Photo/Christian Torres, File)

HOUSTON (AP) — U.S. Customs and Border Protection has ordered medical checks on every child in its custody after an 8-year-old boy from Guatemala died, marking the second death of an immigrant child in the agency’s care this month.

The death came during an ongoing dispute over border security and with a partial government shutdown underway over President Donald Trump’s request for border wall funding.

The boy, identified by Guatemalan authorities as Felipe Gómez Alonzo, had been in CBP’s custody with his father, Agustín Gómez, since December 18. CBP said in a statement late Tuesday that an agent first noticed the boy had a cough and “glossy eyes” at about 9am Monday. He was eventually hospitalized twice and died just before midnight, the agency said.

CBP said in the statement that it needs the help of other government agencies to provide health care. The agency “is considering options for surge medical assistance” from the Coast Guard and may request help from the U.S. Department of Health and Human Services, the Department of Defense, and the Federal Emergency Management Agency.

A CBP spokesman could not immediately answer how many children are currently in the agency’s custody. But with border crossings surging, CBP processes thousands of children —both alone and with their parents— every month.

Immigration advocates and human rights groups sharply criticized CBP in the wake of Felipe’s death. The body of 7-year-old Jakelin Caal, who died earlier this month, was returned this past week to her village in Guatemala for burial.

U.S. Customs and Border Protection Commissioner Kevin McAleenan said Wednesday that the agency has more than 1,500 emergency medical technicians on staff and that officers are taking dozens of sick children to hospitals every day.

“This is an extraordinarily rare occurrence,” McAleenan told “CBS This Morning” of the recent child deaths. “It’s been more than a decade since we’ve had a child pass away anywhere in a CBP process, so this is just devastating for us.”

Margaret Huang, executive director of Amnesty International USA, said the Trump administration’s “policies of cruelty toward migrants and asylum-seekers at the border must cease immediately before any more children are harmed.”

The White House referred questions about the latest case to the U.S. Department of Homeland Security, CBP’s parent agency. CBP officers and the Border Patrol remain on the job despite the shutdown.

CBP Commissioner Kevin McAleenan said in a statement that the child’s death was a “tragic loss.” The agency said it has notified the DHS inspector general.

CBP issued a timeline of what it said happened before Felipe’s death.

Felipe was taken with his father to a hospital in Alamogordo, New Mexico, where he was diagnosed with a common cold, according to the timeline.

The boy was released just before 3pm, about 90 minutes after he had been found to have a fever of 103 degrees Fahrenheit (39.4 Celsius), CBP said. He was prescribed amoxicillin and ibuprofen, and taken with his father to a holding facility at a highway checkpoint.

At about 7pm, agents helped clean up the boy’s vomit. CBP said the father “declined further medical assistance” then.

The agency said its officers repeatedly conducted welfare checks on Felipe and his father, and that agents decided to take the boy back to the hospital at about 10pm because the boy “appeared lethargic and nauseous again.” He died at 11:48pm Monday, the agency said.

Felipe and his father were detained by CBP for about a week, an unusually long time that the agency did not fully explain Tuesday.

CBP typically detains immigrants for no more than a few days when they cross the border before either releasing them or turning them over to U.S. Immigration and Customs Enforcement for longer-term detention.

Agency guidelines say immigrants generally shouldn’t be detained for more than 72 hours in CBP holding facilities, which are usually smaller and have fewer services than ICE detention centers.
CBP said it apprehended Felipe and his father on December 18 about 3 miles (5 kilometers) away from an official port of entry, the Paso del Norte bridge connecting El Paso and Juárez, Mexico. They were held at a processing center for almost two days then taken to the El Paso Border Patrol station on Thursday.

CBP said it moved them to Alamogordo at about 1am Sunday “because of capacity levels at the El Paso station.” Alamogordo is about 90 miles (145 kilometers) from El Paso.

Oscar Padilla, the Guatemalan consul in Phoenix, said he was told by the boy’s father in a telephone interview that the two had been traveling from their home in Nentón, a village about 280 miles (450 kilometers) from Guatemala City. They were planning to go to Johnson City, Tennessee.

CBP promised “an independent and thorough review of the circumstances,” and the Guatemalan foreign ministry called for an investigation “in accordance with due process.”

Democratic members of Congress and immigration advocates sharply criticized CBP’s handling of Jakelin Caal’s death and questioned whether border agents could have prevented it by spotting symptoms of distress or calling for an evacuation by air ambulance sooner.

CBP has said that it took several hours to transport Jakelin and her father from a remote Border Patrol facility to a larger station, where her temperature was measured at 105.7 degrees Fahrenheit (40.9 degrees Celsius). Emergency medical technicians had to revive her twice. She was ultimately flown to an El Paso hospital, where she died the next day.

Xochitl Torres Small, a Democrat who will represent the district starting in January, called for a thorough and transparent investigation into the children’s deaths and more medical resources along the border.

“This is inexcusable,” Torres Small said in a statement Tuesday. “Instead of immediately acting to keep children and all of us safe along our border, this administration forced a government shutdown over a wall .”