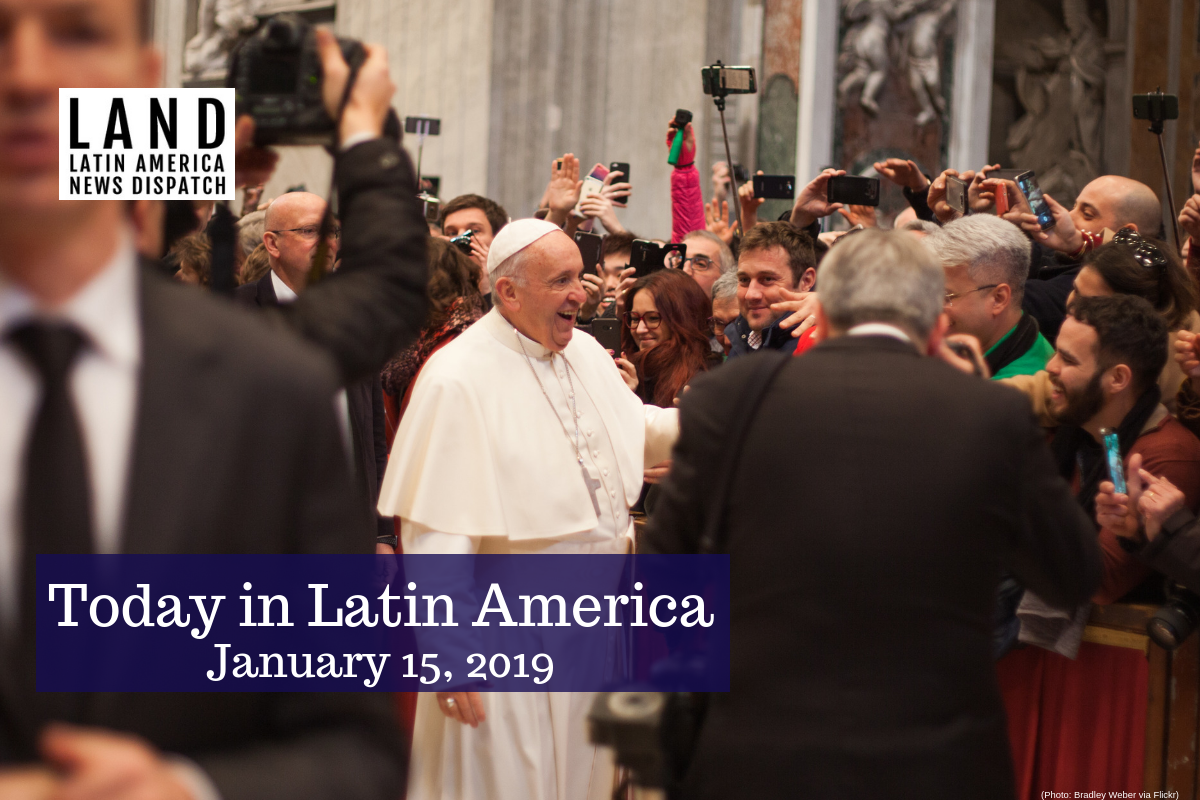 Pope Francis met with a group of Chilean bishops yesterday, a year after his trip there amid claims of sex abuse and cover-up in the Chilean Church. (Photo by Bradley Weber via Flickr)

CHILE: Pope Francis met with Chilean bishops in Vatican City yesterday to discuss their strategies to address a pattern of sexual abuse and impunity. The meeting took place a year after Francis defended a Chilean bishop accused of covering up crimes against children. Francis later apologized for defending Juan Barros, Bishop of Osorno.

Since his trip to Chile last year, the Vatican and the Chilean Church have taken steps to ameliorate the scandal. In May 2018, following a Vatican investigation, all 31 bishops in Chile and three retired bishops offered to resign because of the abuse scandal. So far seven bishops have done that, but two of those at this week’s meeting are under investigation. Then in October, Francis expelled two retired bishops from the priesthood due to accusations that they had abused minors.

UNITED STATES: In a new testimony, a witness at Joaquín “El Chapo” Guzmán’s trial in Brooklyn revealed that Guzmán had ordered the murder of Sinaloa cartel communications engineer Christian Rodríguez for cooperating with FBI to hack the cartel’s cellphones. In 2013, Rodríguez fled to the United States and Guzmán failed to assassinate him. Last week, Rodríguez testified about the communication system he installed for the cartel in 2008, three years before he was approached by the FBI. With his help, they were able to track down the witness Alex Cifuentes’s brother, Jorge Cifuentes, using a GPS tracker on his cellphone.

MEXICO: In yesterday’s morning news briefing, Mexican President Andrés Manuel López Obrador (AMLO) said that the government is making progress on the country’s fuel theft issue. Although many civilians are still waiting in long lines to refuel, more than 5,000 security guards have successfully protected major pipelines since last Friday, and gasoline is gradually being redistributed, AMLO said. Furthermore, some gasoline tankers involved in the fuel theft have been seized and cases have been made against three senior officials at fuel company, Pemex, where corruption has resulted in the illegal fuel trade.

MEXICO: Central American migrants are not the only ones who have sought refuge in Mexico. Two years ago, thousands of Haitian refugees sought asylum in the United States. When they were rejected, they found shelter near Mexico’s northwestern border, where they were granted work visas. Today, there are roughly 4,000 Haitians living in Tijuana alongside newly arrived Central American migrants who wait for their own asylum claims to process.

GUATEMALA: Last week, one of the oldest steam baths in Mesoamerica was unearthed in northern Guatemala by a team of Polish archeologists. Discovered in the ancient Mayan city of Nakum, located in the modern-day department of Petén, a team of archeologists from Krakow’s Jagellonian University said that the room is “almost entirely carved into limestone bedrock.” Archeologists estimate the steam bath was used in ceremonial rituals between approximately  700 B.C. and 300 B.C. Originally thought to be a tomb, the steam bath’s discovery is the culmination of a five-year archeological project.

HAITI: Men dressed in police uniforms were behind the massacre of 21 people in an impoverished neighborhood in Port-Au-Prince last November, according to witness accounts told to the Associated Press. Over a 24-hour period in December 2018, unarmed residents at La Saline were taken out of their residences and executed in the streets by men in police garb. These were accompanied by other individuals clad in black, whom witnesses say were members of local gangs. In a report released last year, a Haitian human rights group condemned the massacre at La Saline as the “government’s inability to guarantee security” for its citizens.

PUERTO RICO: Yesterday, after declaring his candidacy for president last week, U.S. lawmaker Julián Castro visited the island in hopes of increasing Latino voter turnout in the 2020 election. The youngest member of the Obama cabinet, Castro, 44, served as secretary of housing and urban development. In his first address as a presidential candidate, the former mayor of San Antonio, Texas, stated that President Donald Trump “had failed the people of Puerto Rico.” Yesterday, the White House slammed the 39 Democrats who visited the U.S. territory last week in what became the largest congressional delegation to visit the island in history.

COLOMBIA/REGION: President Iván Duque is advocating for a new regional organization to counter the one created in 2008 by Venezuela’s Hugo Chávez and other left-wing leaders. Six countries, including Colombia, have since distanced themselves from UNASUR as conservative leaders have come into power and Venezuela’s government has become more authoritarian. Duque said yesterday he had already spoken with Chile’s president, Sebastián Piñera, about forming a group called Prosur that would support free markets and democracy.

BOLIVIA: A former militant returned to Italy yesterday after he was arrested in the city of Santa Cruz. Cesare Battisti faces life in prison for four murders he says he did not commit. The former militant communist spent two years behind bars before escaping in 1981. He fled to Mexico, then France, and then Brazil, where outgoing President Michel Temer last year approved his extradition. Bolivia did the same on Dec. 26, five days after Battisti arrived in that country according to authorities.

BRAZIL: Ten months after Brazilian councilwoman Marielle Franco was murdered, her sister voiced concern that the case would not be solved under the leadership of Rio de Janeiro’s new conservative governor, Wilson Witzel. Anielle Franco accused Witzel of being involved in vandalizing a street sign honoring her sister. During his campaign, Witzel participated in a rally where two other candidates displayed the damaged sign. Marielle Franco and her driver were shot to death in March 2018 after she spoke at a meeting about empowering black women.