My tired, bald brown head radiated joy. The students in my class at UCLA had aced their papers on the usually difficult topic of manufacturing consent in the media. Tired, but animated by the students’ successes and by the sunny day in San Francisco, I sipped my coffee and started reading the news. And then I saw the image that snuffed out my joy with a speed and force that still has my frontal lobes tightening. A python in my belly is squeezing the life out of a what, seconds earlier, was a walking, talking, flying rainbow of a parrot.

Since seeing that image, my lobes have had a heaviness akin to that I felt when my mom died or when I’ve looked down into the closest thing to the mythical abyss I’ll ever know: mass graves overrun with rotting bodies whose sight and smell lasts long after the abyss looks back at you in precisely the ways that Nietzsche warned us about.

The mere sight of Abrams, whose famously thick and pointed eyebrows appear to have been manicured, disturbs. A very different look acquired since the days when he pleaded guilty to lying to Congress about his support of the Nicaraguan Contras, the US-backed group denounced by major human rights organizations for what one called their “pattern of brutality against largely unarmed civilians, including rape, torture, kidnappings, mutilation and other abuses.”  The Contras also claimed the lives of thousands of innocents.

My first personal experience of Abrams’ work with the Salvadoran government as Ronald Reagan’s  Assistant Secretary of State for Human Rights and Humanitarian Affairs came in the early 80s, at the beginning of the civil war, when I was a curly-haired teen visiting my family in San Vicente province.

My mom’s sister, Tía Pacita, and I were driving in her clunky red Toyota down a rocky part of the Pan American highway hugging the Valle de Jiboa, the lushest, greenest, volcano-fed valley in El Salvador.

The sunset had darkened the road, but we could still see a site stranger than that of a rainbow-colored parrot: a woman sitting in a chair in the middle of the Pan American highway. Tía Pacita slowed down, telling me, “Ojo al Cristo,” eye on Christ, be vigilant. As we got closer to passing the woman in the chair, Tía Pacita shined the Toyota’s high beams to reveal the site I’d not soon forget: the bloody chair with the woman’s bloodied torso, her head lying on the rocky road we sped past as quickly as the clunky Toyota could.

The beheaded woman was likely a victim of Salvadoran death squads and US-backed military responsible for 85% of civilian deaths during the 12-year war, according to the most comprehensive record of the war’s atrocities, the United Nations Truth Commission report of 1992.

In public, Abrams defended the Salvadoran government in the 80s, calling members of Congress and journalists who questioned U.S. policy in Central America names like “fools,” “pious clowns” and “abysmally stupid,” previewing his perfect fit as a future Trump Administration operative.

Abrams’ response to the December 7, 1982 massacre in the town of El Mozote also previewed the practices that earned him calls like that from veteran journalist Allan Nairn, who on national television and in front of Abrams told him he “would be a fit subject for such a Nuremberg-style inquiry”.

Initially ignoring  and then questioning reports of the El Mozote massacre, Abrams told a Senate committee that the reports were “not credible.” As reports grew,  he downplayed the numbers of people killed. A decade later, the U.N. Truth Commission documented a big part of the massacre whose remains are still being excavated:

On 10 December 1981, in the village of El Mozote in the Department of Morazán, units of the Atlacatl Battalion detained, without resistance, all the men, women and children who were in the place. The following day, 11 December, after spending the night locked in their homes, they were deliberately and systematically executed in groups. First, the men were tortured and executed, then the women were executed and, lastly, the children, in the place where they had been locked up….

In response to the U.N. Truth Commission report, Abrams described it as an attempt to “rewrite history,” saying “the [Reagan] administration’s record in El Salvador is one of fabulous achievement.”

Almost 30 years later, forensics teams still working at the El Mozote site told me the count of the dead is almost at 1,000 men, women and children. Several of the children had been tossed into the air and bayoneted by the U.S.-trained and equipped forces of the elite Atlacatl battalion.

Declassified documents later showed that Abrams and other Reagan officials knew considerably more about the El Mozote (and many other massacres) than they let on. 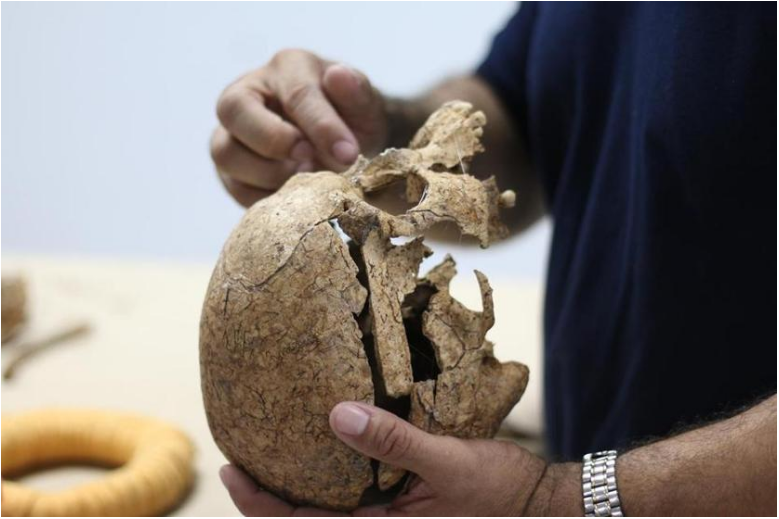 None of the U.S. officials and close to none of the Central American military leaders responsible for mass murder —El Salvador left 80,000 dead, Guatemala between 200-250,000 dead, and thousands more killed by the US-backed Nicaraguan Contras— has faced justice for war crimes. Last September 26, a Guatemalan court declared that the U.S. policy promoted by Reagan officials like Abrams formally led to mass killings there that were defined as “genocide.” Abrams went to advise on counterinsurgency and other policy in Iraq,  where the U.S/ military trained local Iraqis to exercise the “El Salvador option” that left many tortured, disappeared and dead.

The picture of Abrams with Smolansky, the opposition leader, makes me fear that we’re about to witness an El Salvador option for Venezuela. It takes me back to 2014. I was in Venezuela doing a lengthy investigative story about Smolansky’s ally in the Venezuelan opposition, Leopoldo López. The country was in the midst of what many Chavistas denounced as another coup attempt led by López, who current opposition leader and self-proclaimed president Juan Guiadó calls his mentor.

I was chasing down Smolansky, who at the time was mayor of the city of El Hatillo, a Caracas suburb. After several calls to his aides led nowhere, I found out Smolansky was going to be at a land takeover organized by Chavista peasants. I rushed there and arrived to a tense situation. Chavista squatters were exchanging insults with anti-Chavista activists, several of whom were part of the now-outlawed Voluntad Popular that López, Smolansky and self-proclaimed president Guiadó belong to.

When I approached him, Smolansky refused to interview me, his aides aggressively shooing me away. I decided to do interviews with both the protesters and Smolansky’s anti-Chavista supporters. In the middle of an interview with a woman, one of the anti-Chavistas, an older man, walked up to me, pulled out a gun and put it to my chest before saying, “You’re either going to leave on good terms or stay on bad terms.” Seeing I would get no support from Smolansky or anyone else in authority there, I left. Days later, after I returned home to  my family, I was contacted by a man identifying himself as Agent Mike Ranger of the U.S. State Department, the agency under whose auspices Elliot Abrams did all his work in El Salvador.

“I’m calling because I understand you received a death threat,” Agent Ranger asked me in a very Captain America tone.

I let Ranger know that I was glad to hear my government was concerned for my well-being, but…

“How do you know about that incident, if I didn’t report it to the authorities?” I asked.

“I’m not at liberty to tell you, sir” the Captain America voice said.

I took the liberty of ending the conversation and reporting the incident to my editor and went on to write a story that, in addition to the death threat, got the magazine threats of lawsuits from powerful “human rights lawyers” that the National Lawyers Guild and other legal organizations defending my story prevented from censoring. These and other attacks felt as eerily familiar as the erasure of countless crimes and victims left buried and unreported in the oblivion of Central America’s mass graves did.

Though my peers in the U.S. media are very good about reporting killings of opposition members by the Maduro government, they hardly report the killings of Chavistas and civilians by opposition members like those who killed Elvis Durán, a young motorcyclist whose father described to me how his son was beheaded in 2014 by barbed wire set up by opposition youth, following advice from a rogue military officer who tweeted instructions on how to hurt their adversaries.

In addition, major U.S. media did not provide the necessary balance when opposition members join the government in extreme violence. Preferring to curate the image of the opposition as solely peaceful, the U.S. media maintains an unhealthy disinterest in opposition violence like that seen in 2014: firebombing of government ministries, child care centers, city buses, and television stations, the fatal shootings of Chavista sympathizers and other acts that, in a U.S. context, would be reported by my peers in the press as “terrorism.”  Some sources in Venezuela even told me that several key leaders in U.S.-funded opposition groups have “neofascist” origins.

All of this makes the current and future situation facing Venezuela feel familiar, reminding me of the days when death squads pursued many of us in El Salvador —and in California— all because we were either opposed to or questioned U.S. policies designed by Elliot Abrams, the convicted criminal who helped lay the foundation for killing in tiny El Salvador of a scale so massive it makes the combined violence of the government and opposition in the far larger country of Venezuela look puny by comparison.

So, when I see my media peers calling Abrams a “controversial” choice, I cringe.

When I read reports that President Trump appointed Abrams in order to “restore democracy” to Venezuela, I literally want to vomit, as my head feels perpetually heavy, like when somebody dies.

When I see Abrams meeting with opposition members who are part of Venezuela’s “peaceful opposition” the U.S. media tells us about, the python in my stomach tightens in fear for the rainbow parrots of Venezuela’s future. But in the midst of all these ominous clouds over Venezuela, I do see one positive development: that Elliot Abrams and Venezuela will help make me feel elated that my students score even higher on their exams about manufacturing consent.

3 responses to “Elliott Abrams: An Unequivocal Sign Trump Is Preparing a Baptism in Venezuelan Blood (OPINION)”