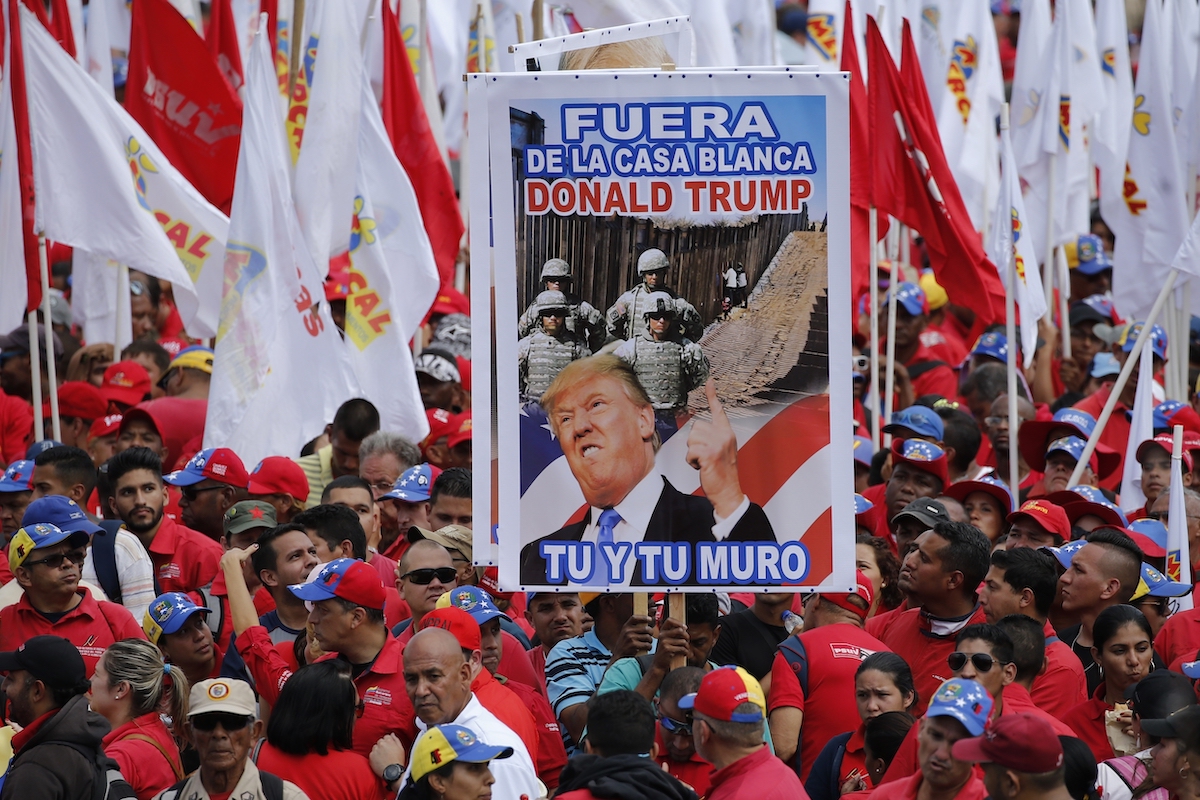 Supporters of President Nicolás Maduro hold up a banner with a picture of U.S. President Donald Trump and a message that reads in Spanish: “Get out the White House Donald Trump, you and your wall” during a rally in Caracas, Venezuela, Saturday, February 2, 2019.  (AP Photo/Ariana Cubillos)

Maduro’s call for early legislative voting is likely to intensify his standoff with rival Juan Guaidó, who heads the opposition-controlled National Assembly and is demanding a new presidential election. Guaidó declared himself Venezuela’s legitimate ruler on January 23, and has the support of Washington and most South American nations.

Speaking from behind a podium decorated with Venezuela’s presidential seal, Guaidó told supporters he would keep his opposition movement in the streets until Maduro stopped “usurping” the presidency and agreed to a presidential election overseen by international observers. On Saturday, tens of thousands of Venezuelans joined opposition protests against Maduro in Caracas and other cities. 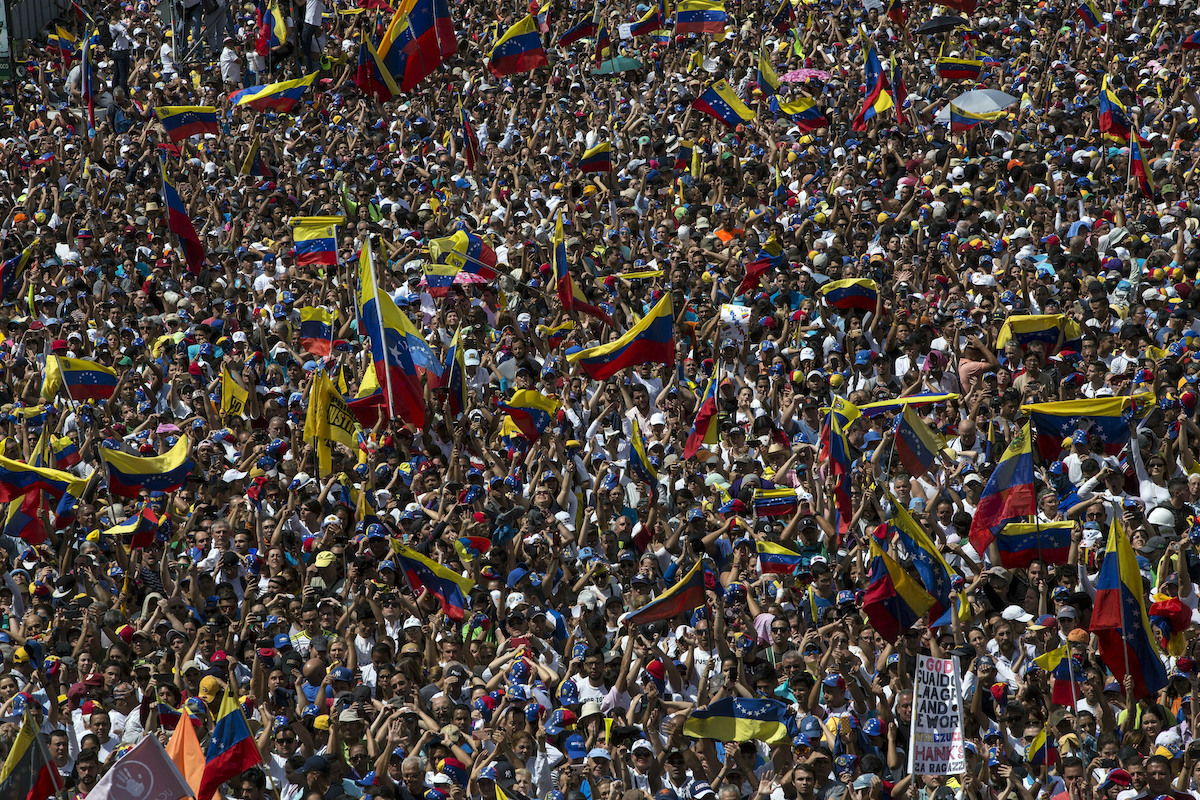 Guaidó called on “blocks” of the military to defect from Maduro’s administration and “get on the side of the Venezuelan people.”

“We don’t just want you to stop shooting at protesters,” Guaido said in a hoarse voice. “We want you to be part of the reconstruction of Venezuela.”

He said in the coming days, the opposition would try to move humanitarian aid into the country by land and sea along three border points, including the Colombian city of Cúcuta. He described the move as a “test” for Venezuela’s armed forces, which will have to choose if they allow the much needed aid to pass, or if they instead obey the orders of Maduro’s government.

Maduro also dug in his heels, insisting he was the only president of Venezuela and describing Saturday’s anti-government protests as part of a U.S.-led coup attempt.

“I agree that the legislative power of the country be re-legitimized and that we hold free elections with guarantees, and the people choose a new National Assembly,” Maduro said at a pro-government demonstration in Caracas.

The opposition controls the National Assembly while government supporters control the more-powerful Constituent Assembly, so calls for a vote to replace the former and not the latter was seen as a move against Guaidó. 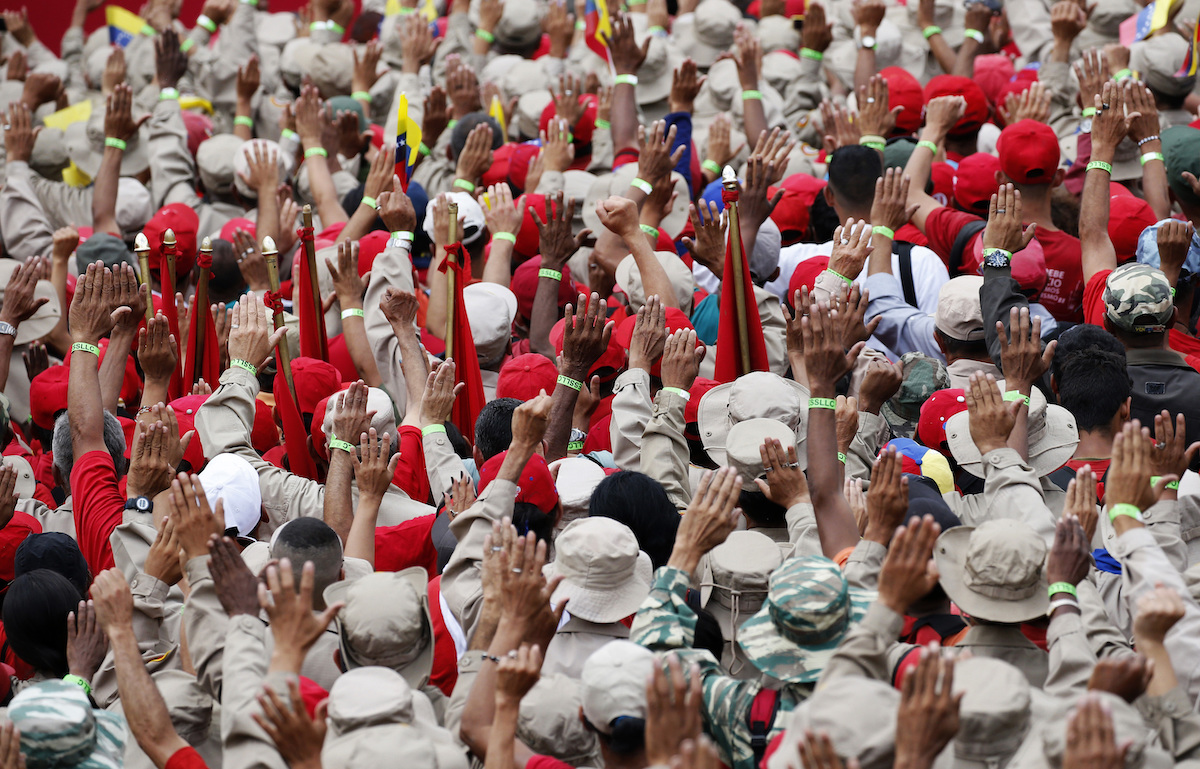 Members of the Bolivarian Militia rise their hand swearing allegiance to the country at a rally in Caracas, Venezuela, Saturday, February 2, 2019. (AP Photo/Ariana Cubillos)

The socialist leader also had words for the administration of President Donald Trump, which recently imposed sanctions on Venezuelan oil exports in an effort to undermine Maduro’s main source of income and weaken his grip on power.

“Do you think you are the emperor of the world?” he asked Trump. “Do you think Venezuela is going to give up and obey your orders? We will not surrender.”

The standoff comes amid what appears to be growing dissension among the ranks of Venezuela’s powerful military.

Earlier Saturday, a Venezuelan air force general defected from Maduro’s administration and called on his compatriots to participate in protests against the socialist leader’s rule.

Gen. Francisco Yánez is the first high-ranking officer to leave Maduro’s government since Jan. 23, when Guaido declared himself the country’s legitimate leader by invoking two articles of the Venezuelan constitution that he argues give him the right to assume presidential powers. He considers Maduro’s election win fraudulent.

In a YouTube video, Yánez described Maduro as a dictator and referred to Guaidó as his president. He didn’t say where he was.

The officer confirmed in a phone call with The Associated Press, from a Colombian number, the veracity of his declaration. He said he would not speak further until given authorization by “the commander-in-chief of the legal armed force, which is President Juan Guaidó.”

The military controls some of Venezuela’s key assets, including the state-run oil company, and until now, its top brass has helped Maduro to survive rounds of mass protests in 2014 and 2017 by jailing activists and repressing protesters.

Yánez said in his video that “90 percent of the military” is against Maduro, but it is unclear how many will actively support the opposition.

Shortly after protests broke out against Maduro last week, Venezuela’s most important regional military commanders and its defense minister issued a statement in support of Maduro, describing Guaidó as a coup-monger backed by Washington.

Venezuela’s aerospace command of the armed forces shared a picture of Yañez on its Twitter account with the words “traitor” above it.

“We reject the declarations made by General Yánez who betrayed his oath of loyalty to our nation and chose to follow foreign plans,” the command wrote.

On Saturday, Maduro said he was willing to sit down for talks with the opposition in an effort to promote national “harmony.”

But that offer has been rejected by Guaidó, who describes it as a ploy by the Maduro administration to buy time.

Previous talks between the government and opposition have failed to change electoral conditions in the South American country, and many political leaders have been forced into exile.

At a pro-Maduro rally, supporters blamed the opposition for undermining the Bolivarian Revolution with years of protests and seeking financial sanctions against the Venezuelan government.

Zeleyka Muskus, a 53-year-old tax collector from Caracas, said the opposition was responsible for the country’s current economic woes, saying they have staged years of protests that have gotten people injured and killed.

“Chávez is the love of my life,” she said, referring to late Venezuelan president Hugo Chávez.

Other public workers attending the pro-government demonstration said they had been forced to go there by their bosses.

Meanwhile, marchers from middle-class and poor neighborhoods walked to another part of the capital and said they were demanding Maduro’s resignation and a transitional government that would hold a new presidential election.

Xiomara Espinoza, 59, said she felt a change of energy in the crowd, whose hopes for a transition in Venezuela have previously been dashed.

“We are around the corner from freedom,” she said, banging on a pot and wearing a Venezuelan flag.