The Wrong Kind of Venezuelan: Florida, Trump and the Racist, Classist Politics of Immigration and Empire (OPINION)

Luis Durán is the first person I think of when I read news of a renewed push by Republicans and some Florida Democrats to grant temporary legal status to Venezuelans. Though he’s Venezuelan, I have serious doubts Durán would ever get fair treatment in the U.S. immigration courts I’ve served as an expert witness in during political asylum hearings.

I have a challenge for the President. Mr. President, #ExtendTPS to Venezuelans and other immigrants who have fled crises and contributed to the @MiamiDadeCounty and the South Florida Community. Do not come to #SoFla tomorrow without extending TPS for Venezuelans. #VenezuelaLibre pic.twitter.com/WqYVkvh8ZO

Poorer, darker-skinned, more African-descended than most Venezuelans living in the U.S., Durán is the wrong kind of Venezuelan. 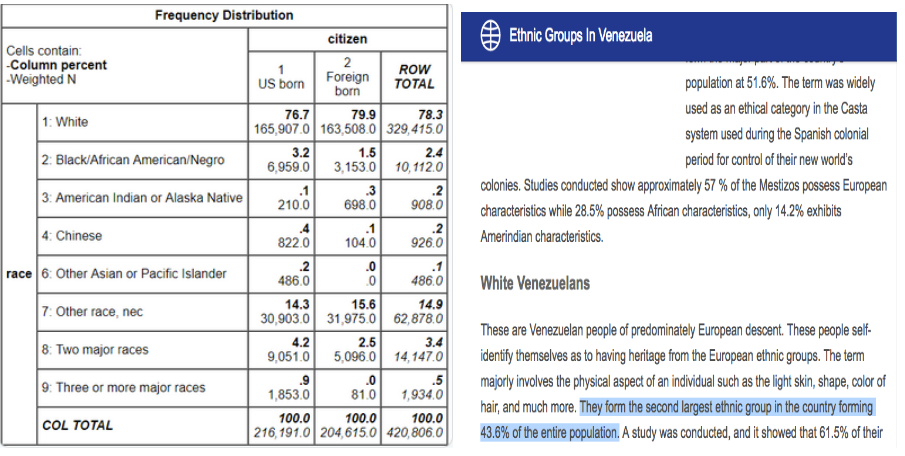 On the left, a racial breakdown of the U.S. Venezuelan population showing the overwhelming majority (78.3%) identify as “white” on the 2017 American Community Survey of the U.S. Census. On the right, a passage from World Atlas showing most (56.4%) of Venezuelans in their home country identify as non-white.

Durán, who currently lives in Venezuela, is not one the Venezuelans who were loudly cheering Donald Trump at his recent rally in Florida, one of the states where the overwhelming majority of Venezuelans identify as “white” in the most recent U.S. Census. Neither is Durán the kind of Venezuelan Republicans and even some Democrats have in mind as they push for ways to support the South Americans with legal instruments like political asylum or Temporary Protected Status (TPS). 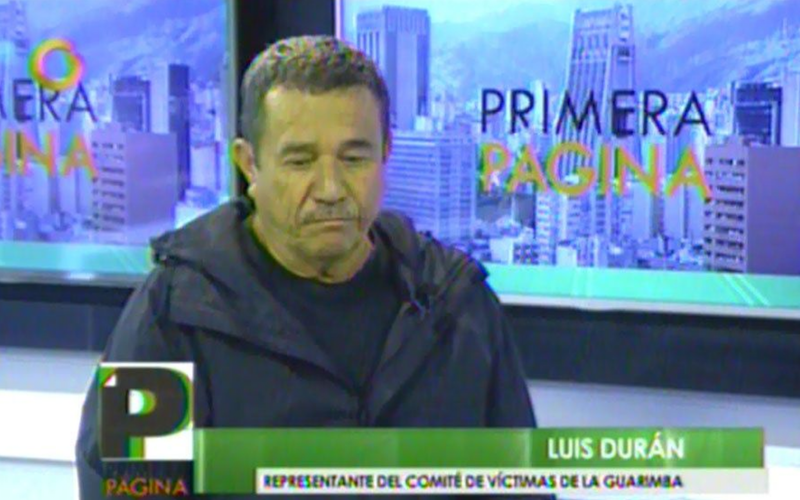 I first heard about Durán during visits to Venezuela I undertook as part of a lengthy investigative story I did about jailed Venezuelan opposition leader, Leopoldo López, who was known to describe himself in unapologetically elite terms: “I belong to one percent of the privileged people”. 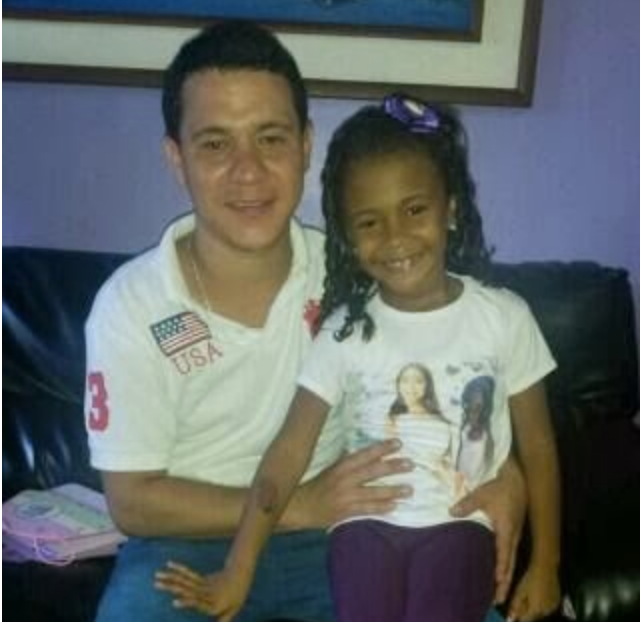 Elvis Durán with his daughter

We met in 2014, after Durán’s son, Elvis, was killed. Elvis’ head had been severed from his neck. The weapon: barbed wire put up for that purpose by the “peaceful Venezuelan opposition” that organized the violent guarimba street protests of 2014. 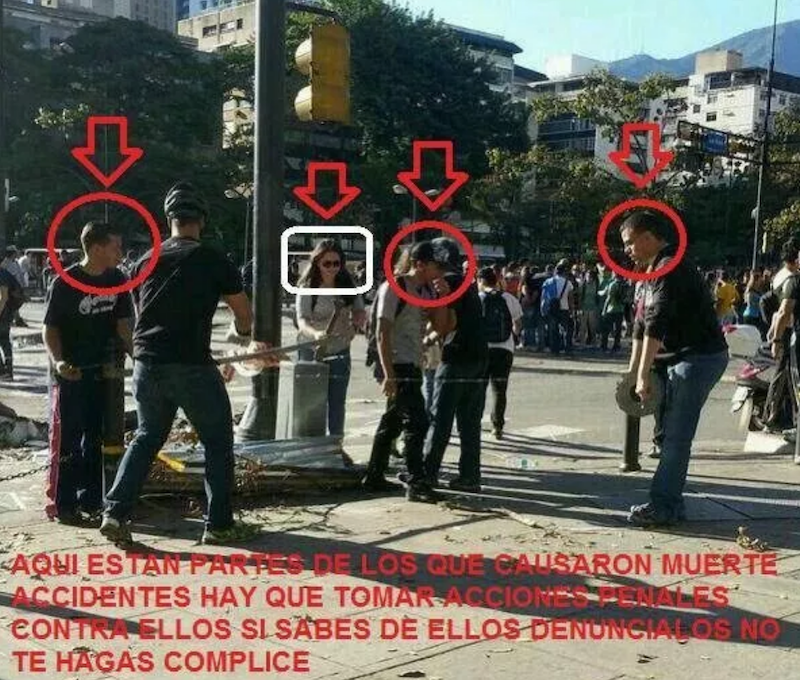 Image of Venezuelan opposition youth setting up barbed wire on the instructions of a rogue military officer named Ángel Vivas.

The image of Luis Durán crying as he described to me what happened to his son shook me. It also made my inner journalist ponder how utterly imbalanced the media reporting of the guarimbas and the Venezuelan opposition was—and still is. 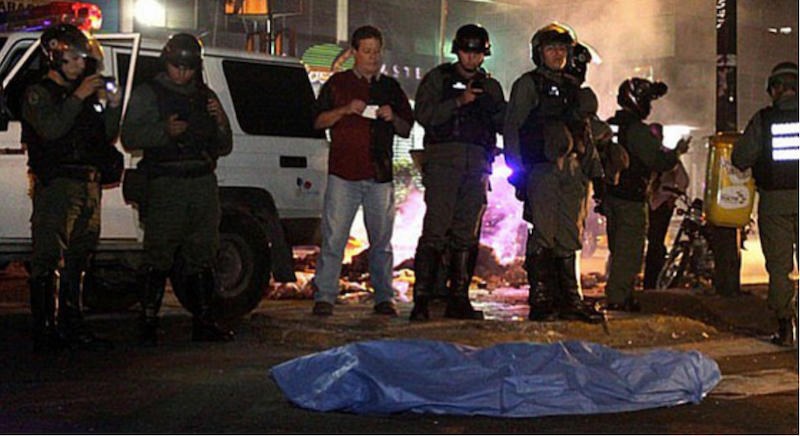 The beheaded body of Elvis Durán

I was also reminded why Luis Durán will not be a good candidate for political asylum, should he decide to one day migrate and apply. His experience of a Venezuelan opposition that, in addition to murdering his son, has burned Black people like him alive during those guarimbas may not help him in a U.S. immigration court of the near future. 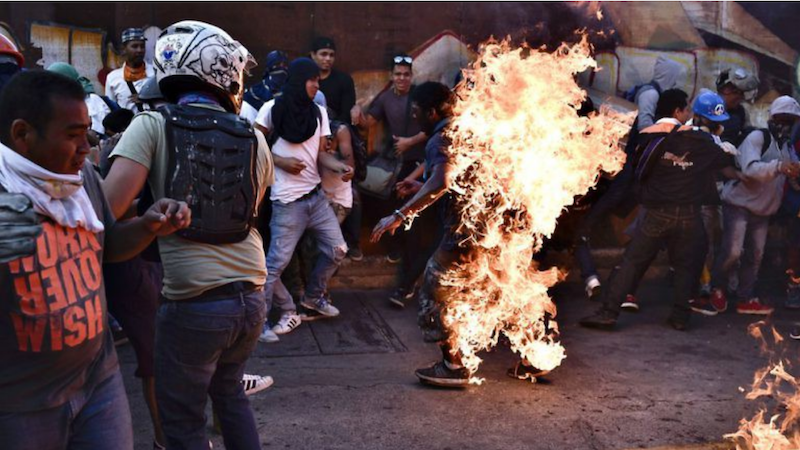 Orlando Figueroa, an Afro-Venezuelan man burned alive by the Venezuelan opposition members who were laughing around him during violent guarimbas of 2014. His immolation and subsequent death were largely unreported in U.S. media.

As I see Democratic Rep. Donna Shalala join Republicans and Trump officials like John Bolton in calling for legal and other aid to Venezuelans fleeing the conflict, I imagine Luis Durán in one of the many immigration courts I’ve been in. I can picture immigration judges and Homeland Security attorneys, many of whom are extremely conservative, asking for news articles and official reports about Elvis’ death. I can see the attorneys and judges then discounting the reports of Elvis’ death because they are from “Venezuelan government sources.” This common ploy is also used by some of my journalist colleagues who ignored and still ignore Elvis’ and other non-opposition deaths.

Towards the end of that era,  I led the country’s largest Central American organization, CARECEN in Los Angeles. We were among the groups across the country who mounted major campaigns to gain some legal recognition of Guatemalans and Salvadorans, including the first TPS. We did so because the Reagan and Bush 1 Administrations deployed envoys and attaches like Elliot Abrams to push military aid policies that led to the deaths of over 300,000 at the hands of US-backed militaries and death squads in Guatemala and El Salvador. For several years, Abrams was the Reagan Administration’s point person supporting those policies.

Before this politicization of the immigration process, we organized because the political asylum claims —one of the primary sources for refugees to gain legal status in the U.S.— were rejected at a rate of 97% for Salvadorans and 98% for Guatemalans. In what’s known as the “American Baptist Churches (ABC) settlement,” courts later sided with CARECEN Los Angeles and other groups suing the U.S. government for the discriminatory practice of rejecting most Salvadoran and Guatemalan asylum claims.

The Reagan Administration also deployed Abrams domestically to aggressively attack Guatemalan and Salvadoran refugees in public forums, as in this clip from the Charlie Rose show.

Abrams also demonstrated his political attack-dog skills in Congress. “What is remarkable,” Abrams told Congress during a hearing on temporary status for Central Americans in 1984, “is that we have not come across a single case of abuse or murder of a deportee, nor has anyone contacted suggested that he knew of such a case.”

As in the Iran-Contra scandal and many lesser-known policy issues, Abrams, who was convicted for lying to Congress after he transferred weapons under cover of humanitarian aid during Iran-Contra, was also lying about the Central American immigration that lethal aid caused. In response to Abrams’ statement, Massachusetts Rep. Joe Moakley pulled out some papers and said, “Here is a list of 61 people that have been killed that has been documented—right there.”

When I see reports of Abrams leading Trump policy in Venezuela today, I see what U.S. courts and too many of my peers in U.S. media won’t: refugees fleeing the extreme violence of the Venezuelan opposition linked to Juan Guaidó, the young legislator tweeted into a parallel Venezuelan presidency by Donald Trump and his allies. I see Luis Durán being rejected in future political asylum claims. This is because the Venezuelan opposition he will flee is supported by Trump and Abrams. An opposition now led by Juan Guaidó, who in 2014, actively participated in the violent guarimbas led by his mentor, Leopoldo López.

When I see Republicans and Democrats like Shalala support TPS for Venezuelans, I still think of Salvadorans and Guatemalans. I also think of Haitians, Nicaraguans and the hundreds of thousands of others cast into a legal abyss after Trump rejected an extension of their TPS status last year and earlier this year.

I think about the tragic irony in the fact that TPS came about because the very Salvadorans that Abrams fought in the U.S. and in El Salvador were responsible for advocating for the same TPS status Abrams’ fellow neoconservatives and Florida Democrats are now promoting for Venezuelans.

Meanwhile, Salvadorans and Haitians and other tired, poor and mostly non-white huddled TPS masses  left out in the cold by Trump are marching and lobbying in Washington. Besides being supported by Trump, right-wing Florida Cubans like Marco Rubio and some Democrats, Venezuelan immigrants are also different in terms of race and class. As a result, Salvadorans, Guatemalans and Haitians received little to no attention during TPS protests they organized last week.

We need look no further than the utter lack of U.S. attention to the current situation in Haiti to see the workings of racism, classism and empire in U.S. immigration and foreign policy. Although massive numbers of Haitians are protesting the U.S.-backed Haitian government President Jovenel Moïse for, among other things, embezzling nearly $4 billion in loans from (of all places) Venezuela, the Trump Administration has a very different response to the situation there.

There is no U.S. intervention. There is no “humanitarian aid” leading a potential invasion. There are no threats of “regime change.” And there is no talk of either extending TPS for them or finding more permanent legal solutions to situation facing immigrant Haitians. There is just the “same ol’ same ol'” of selective immigration policy in the service of imperial ends, namely Venezuela’s oil.

Clearly, they are the wrong kinds of people from Latin America and the Caribbean. With few exceptions (i.e. Nicaraguans and others), they aren’t chanting at the top of their voices while standing with sometimes violent racist loons at Trump rallies in Florida. And like Luis Durán and many others, (perhaps the majority of Venezuelans), Salvadorans, Guatemalans, Haitians and other TPS communities rejected by Trump are not as white, not as poor and not as right-wing as Republicans and Trump would like them to be.

Combined with the fact that they’re fleeing U.S.-backed governments that aren’t sitting on the world’s largest oil reserves, their social extraction hinders these migrants from the wrong side of the color line.

Unless there’s a powerful shift in U.S. immigration and foreign policy, Luis Durán will remain the wrong kind of Venezuelan.

And, for many of us, the United States will remain the wrong kind of country.

7 responses to “The Wrong Kind of Venezuelan: Florida, Trump and the Racist, Classist Politics of Immigration and Empire (OPINION)”