DOJ Attack on Obamacare Has Big Implications for Latinos

The Trump administration’s Department of Justice wants to eliminate all of Obamacare and drastically roll back access to healthcare. On Monday, the Trump DOJ announced that it will continue combating the constitutionality of the Affordable Care Act, agreeing with a Texas federal judge’s ruling against sustaining the ACA on the basis of the GOP tax law changes in 2017. This decision to continue pushing for the repeal of the ACA is a clear signal that health care will be one of the top pressing issues in the upcoming 2020 election.

Beyond these efforts, however, there will be disastrous consequences if the law is eliminated. According to the Urban Institute’s 2019 analysis of the potential consequences of the full repeal of the ACA, an estimated 20 million people would immediately lose health care coverage, and health care spending would decrease in states where coverage rates had increased the most via the ACA.

Latinos in particular made the biggest gains in access to insurance under Obamacare over the last six years. The uninsured rate among the non-elderly Hispanic population dropped by nearly 11 percent from 2013 to 2016, during which considerable ACA provisions went into effect, according to a Kaiser analysis of the uninsured population in 2018.

Despite these gains, however, millions of Latinos continue lacking access to health care, which made health care a top mobilizing and voting issue for Latinos in 2018. While the economy is usually the top voting issue among the electorate, when asked about the most important issue facing their community, 31% of Latinos viewed health care costs and access to care as the number one issue, according to Latino Decisions American Election Eve Poll findings. Moreover, Latinos feel strongly about securing Obamacare, with a large majority of 71% agreeing that the Affordable Care Act should be strengthened compared to only 15% of Latinos disagreeing with such efforts. 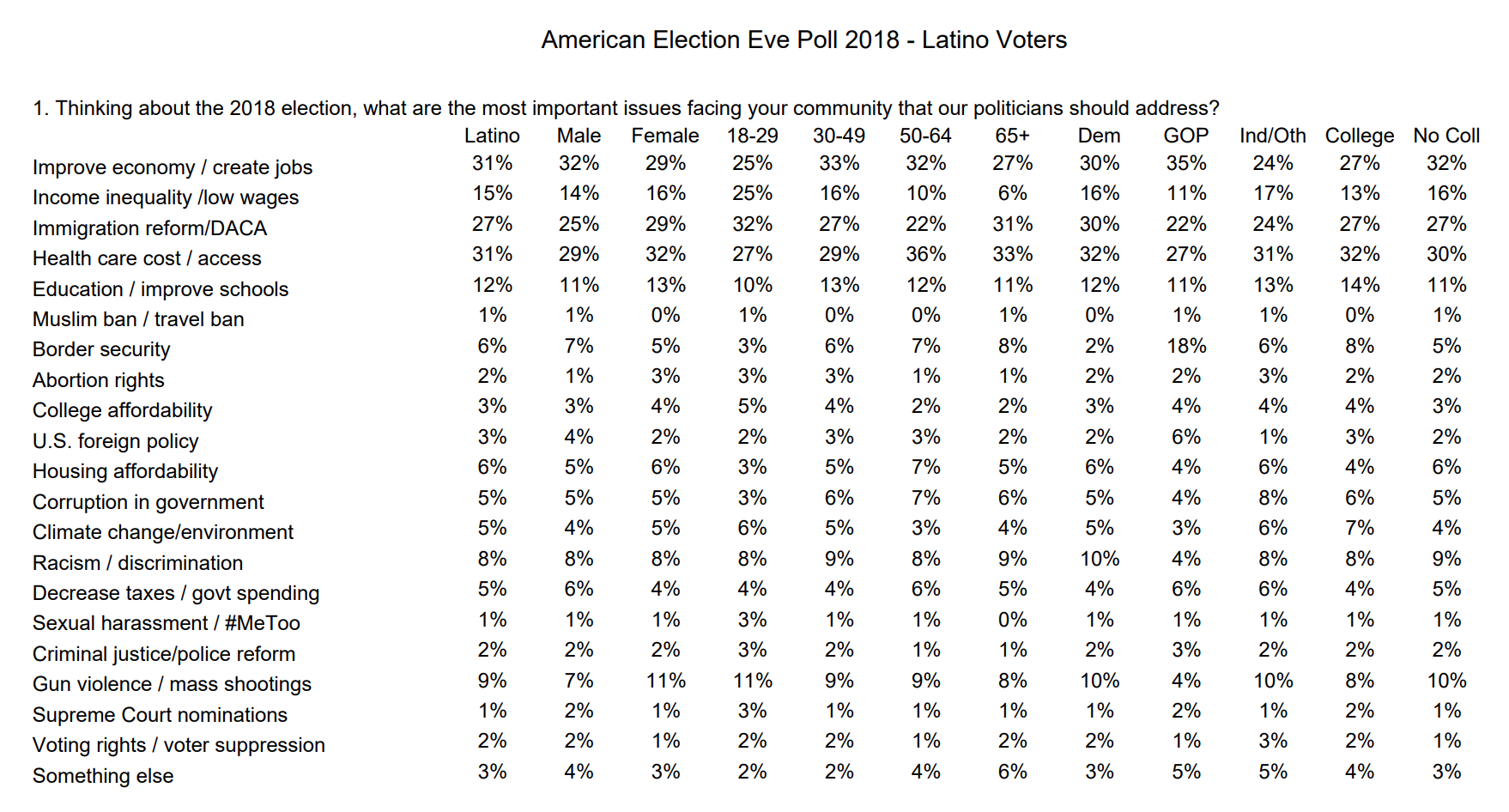 While Trump’s anti-immigrant rhetoric angered many Latinos throughout the 2018 election season, the top policy and financial issue was access to health care. A recent NALEO-Latino Decisions weekly tracking poll in the eve of the 2018 elections showed that health care was consistently one of the main issues for Latinos, where nearly 1 in 4 Latino voters rated lowering the costs of health care as most important across multiple weeks. 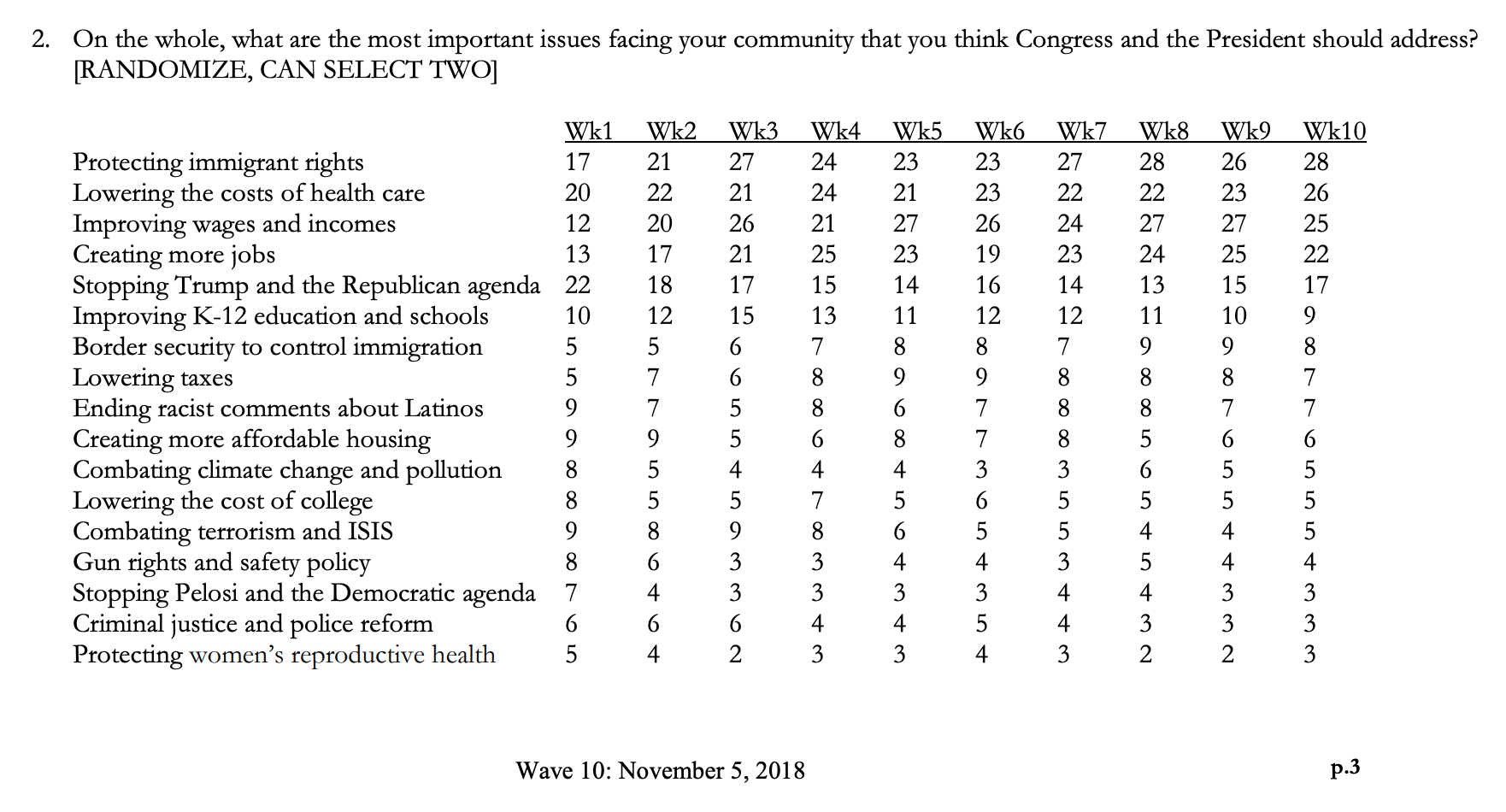 Latinos continue to be the ethnic minority group with the highest uninsured population, thus access to health care is a critical issue. As of 2017, Hispanics made up 37% of the 27.4 million uninsured Americans, according to a Kaiser report. As we saw in 2018 with regard to mobilizing voting issues, Latinos overwhelmingly believe that the government should do more to increase access to health care (84%) compared to only 5% who favor cuts to health care access, according to a 2018 Latino Decisions poll on Latino enthusiasm and vote choice.

Not only is health care access a dominant policy issue for Latinos, it is also a salient source of resentment driven by potential cuts to access. More than 71% of Latinos in 2018 reported feeling very angry about GOP efforts to cut access to health care. If the Republicans lean in on attacking and repealing Obamacare, it will propel the issue to the center stage in 2020 and will likely push Latinos away. 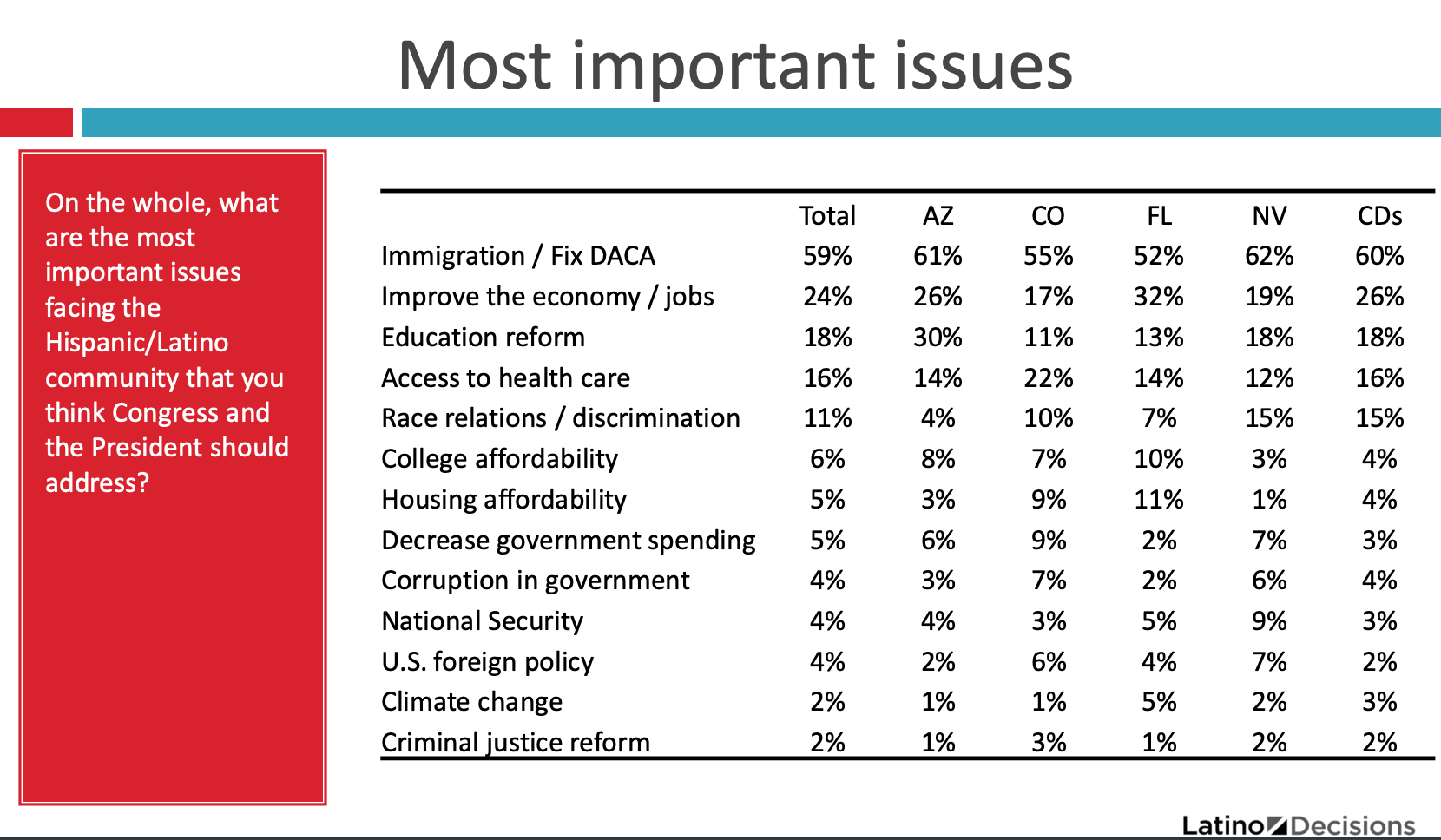 Just as the Republicans lost control of the House in 2018 based on their hostile rhetoric and policies, the GOP’s continued efforts to repeal Obamacare will place them at odds with voters in 2020, especially among Latino voters. In 2018, when asked what issue would inspire them the most to turn out to vote, nearly 1 in 3 Latino voters reported expanding access to health care for working families was the second most important issue for Latinos after the DREAM Act. By the same token, Latinos are much more likely to support a candidate who wants to expand access to health care and improve and protect Obamacare, just as we saw in 2018, according to a NALEO-Latino Decisions weekly tracking poll during the recent midterm elections.

Health care access is currently the principal policy issue of concern and will likely continue to be a pressing issue in 2020. If the Trump administration remains intent on continuing their anti-immigrant rhetoric in 2020, pushing to repeal Obamacare will only solidify their poor standing with Latinos.