Is LA for Beto? It’s Too Early to Tell 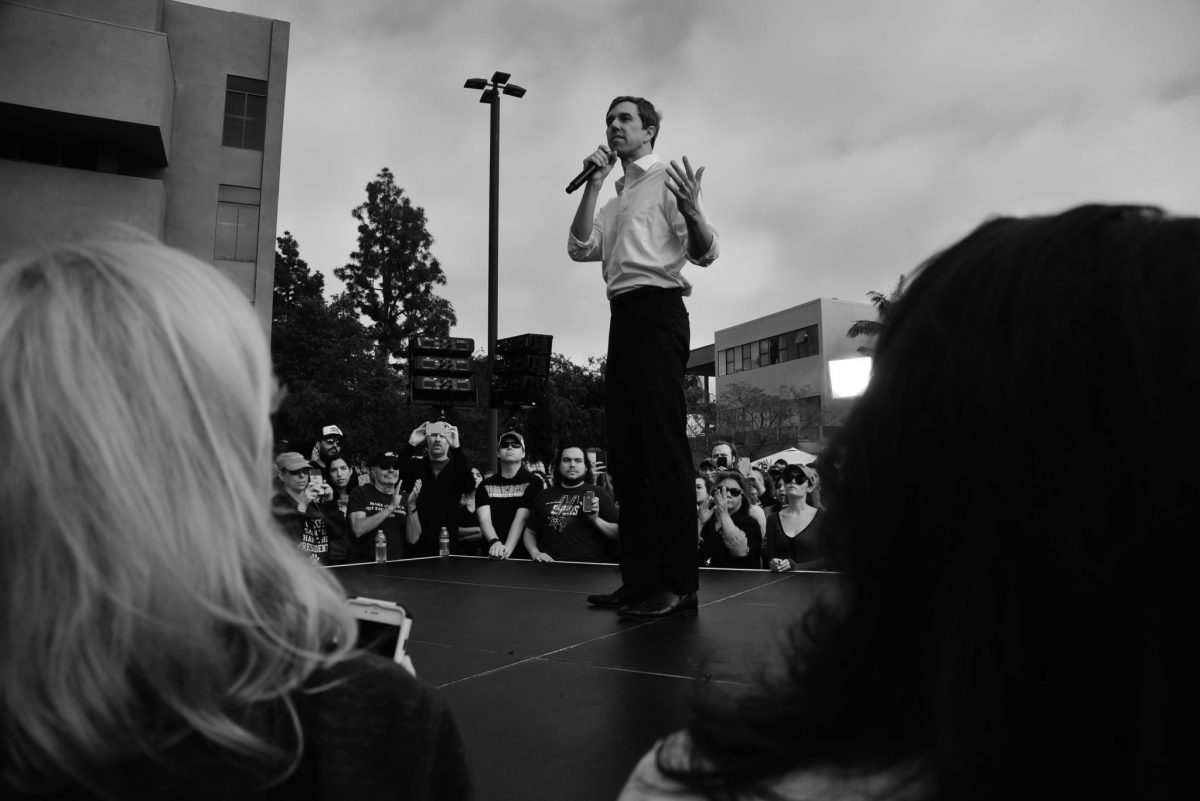 LOS ANGELES — On Saturday, Beto O’Rourke paid his first visit to California as a Democratic presidential candidate. Los Angeles was his first stop in the state, where he addressed a crowd of about 400 people at Los Angeles Trade Tech College. While the crowd gave O’Rourke an enthusiastic welcome, the overall energy could be read as almost subdued, considering O’Rourke managed to galvanize new voters and almost turn the red state of Texas blue when he ran for a U.S. Senate seat in 2018.

O’Rourke (whose full name is Robert Francis O’Rourke) began his 20-minute-long remarks by speaking about the hate crime attack that had just happened at a synagogue in Poway, California.

“Assault rifles belong in the military, and need to be kept in the battlefield and no longer sold in our communities. They do not belong in our synagogues, our churches, in our mosques, in our public places. They will take the lives of those in our lives. It will require all of us to come together to find the differences between us,” he said. “No me importa who you love, to whom you pray or if you pray at all, where you live, how many generations of Americans you can count on your family or whether you just got here today, these defining moments of truth for this country call for a service and sacrifice and a unity from every single one of us putting this country before any personal interest.” 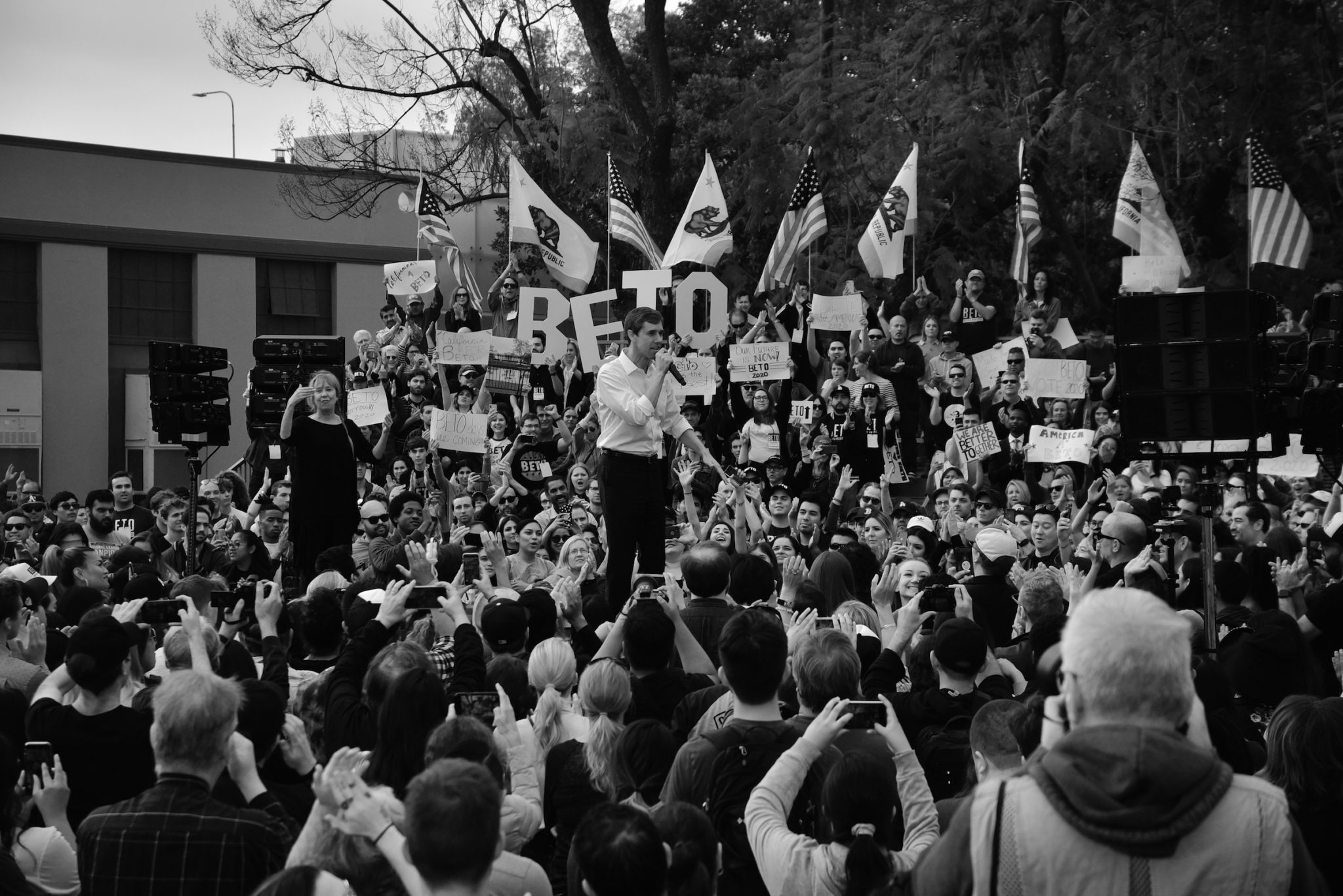 O’Rourke briefly addressed the crowd in Spanish when speaking about immigration issues.

When referring to his Texas campaign, he added, “we visited every single county talking about a crisis in maternal mortality three times as deadly for women of color, connected to the fact that Texas has shut down more than a quarter of our family planning clinics, making it difficult for women to get access to an abortion, also making it hard for them to get cervical cancer screening, to see a family planning provider, to see a provider of any kind in the state, and also have not expanded Medicaid”. 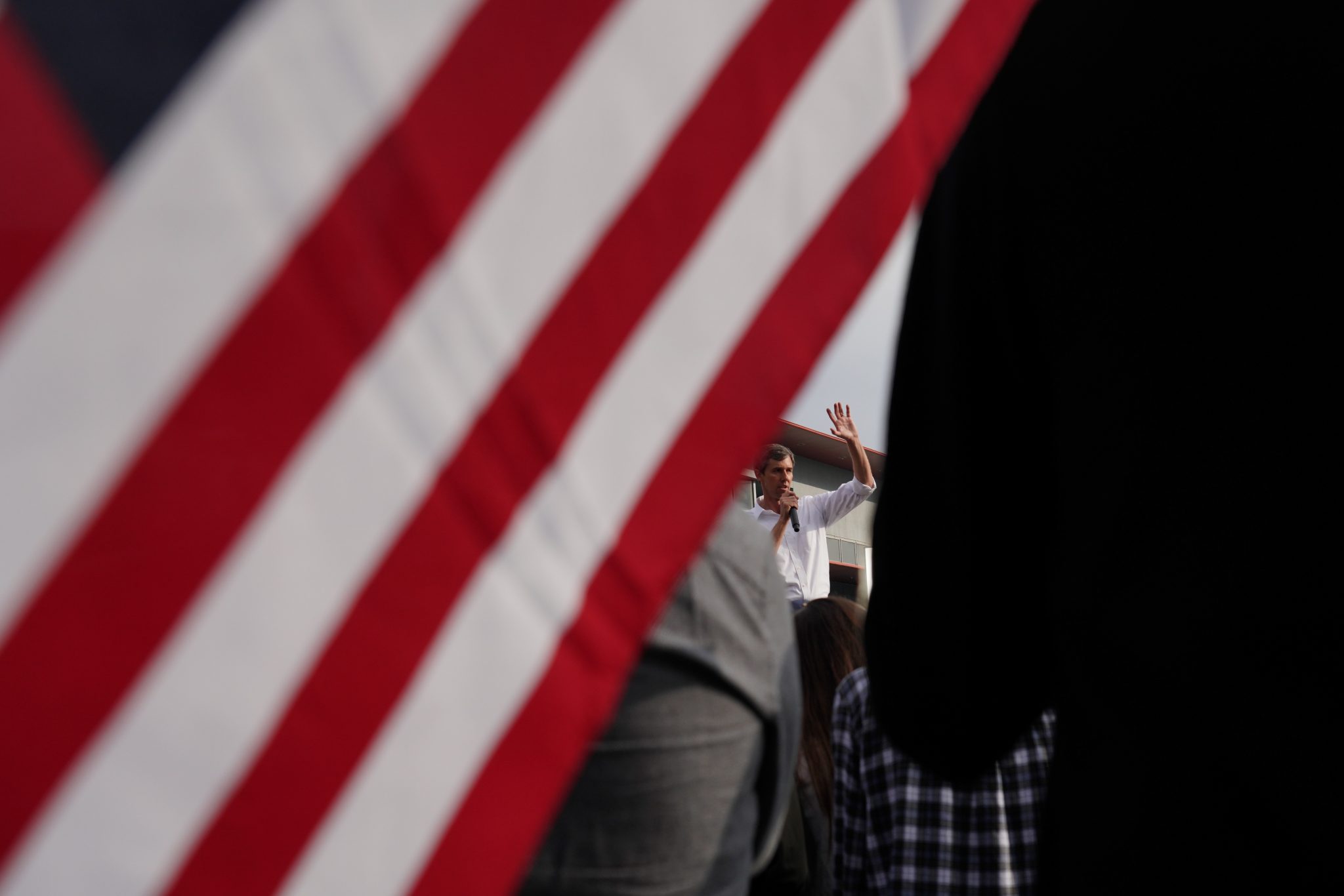 He also spoke about gun violence, universal healthcare, and family separations at the border. 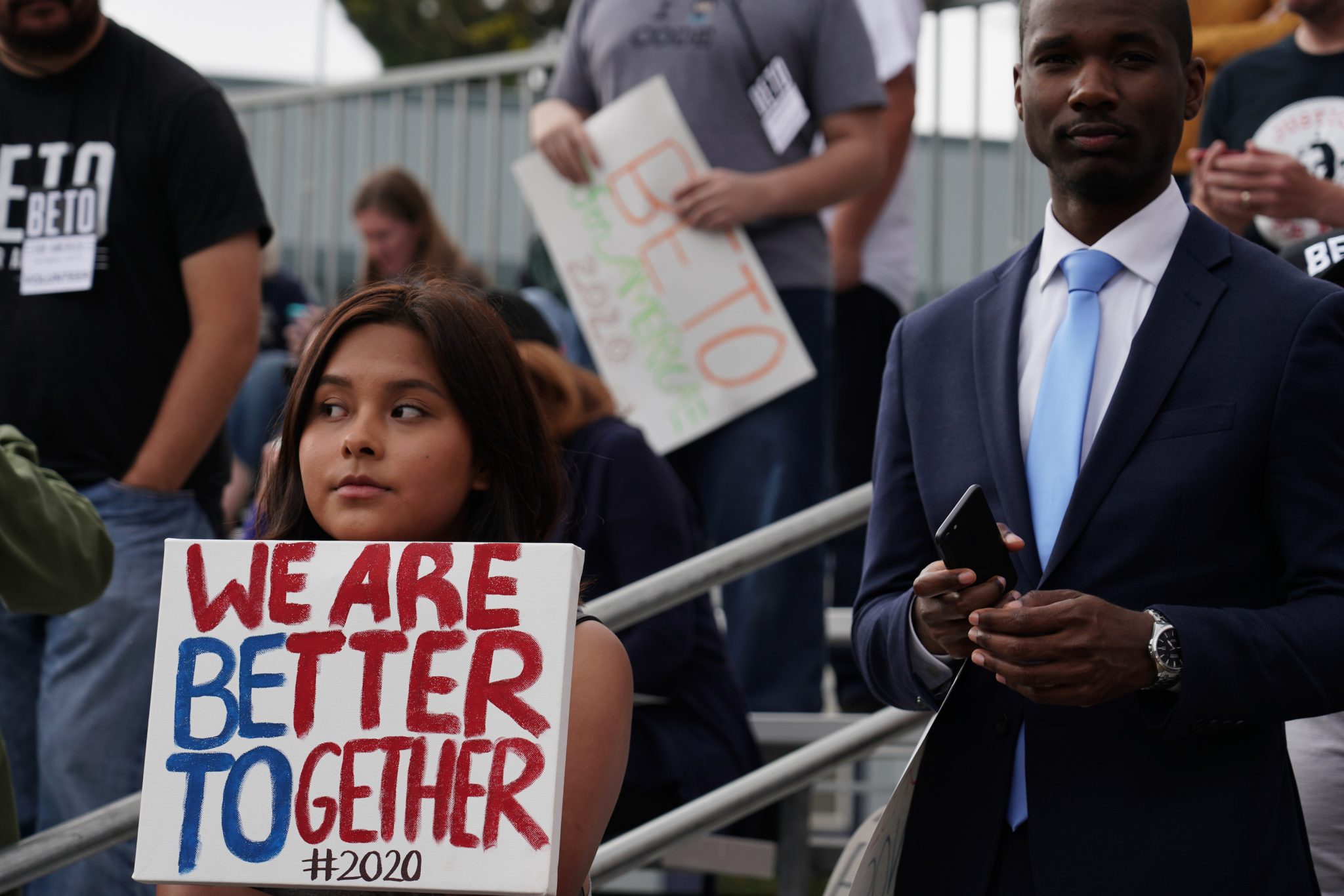 Andrea Pérez, an 18-year-old student at El Camino College. said before the rally that she liked Beto’s approach but she hadn’t made up her mind.

Originally from Culver City, Perez said that before reaching voting age, she had been following Senator Bernie Sanders, but wanted to learn more about O’Rourke. 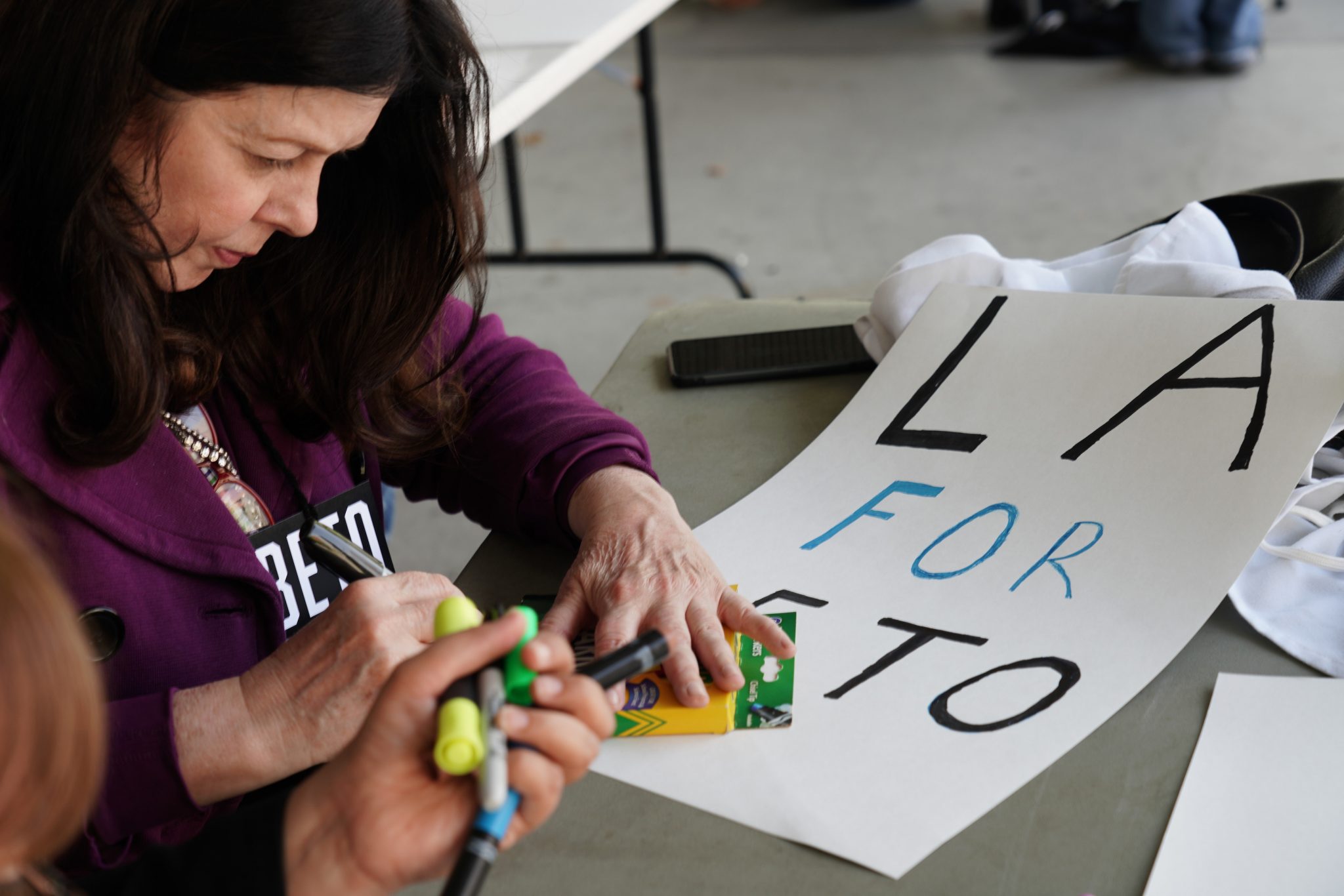 A volunteer working on signs before the rally began. (Photo by Francisco Lozano/Latino Rebels)

The Texas Democrat didn’t seem to draw as many large millennial crowds as Senator Sanders does. The campus instead was filled with a group of people of diverse ages. 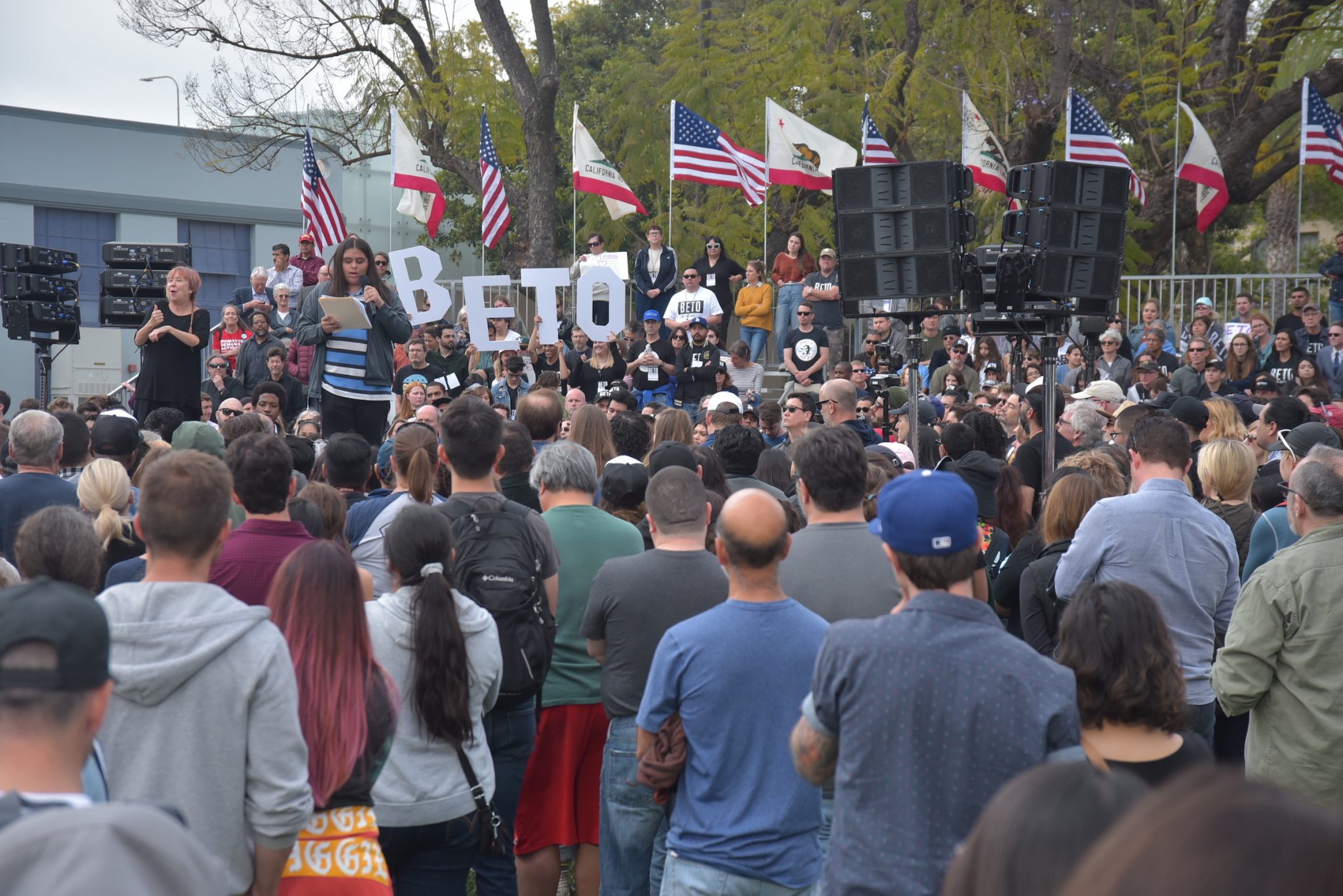 Jesús Villalba, a 16-year-old Deferred Action for Childhood Arrivals program (DACA) hopeful, gave a speech at the rally, underscoring the importance of keeping the program alive. He himself is not a DACA recipient due to not meeting the age requirement, though he came to the U.S. when he was three years old. When interviewed, Villalba made it clear that he was not endorsing Beto but rather just wanted to bring awareness to the program. When asked if he were of voting age, who would he choose? He said, “I think it is too early in the race. We are like a year away, I would have to see what everyone else has to say.”

Volunteer working on signs before the rally began. (Photo by Francisco Lozano/Latino Rebels)

O’Rouke’s visit to California included a stop in San Francisco on Sunday April 28, followed up by San Diego on Tuesday April 30, with some unscheduled visits to the agricultural Central Valley.

“I came to watch him. I thought he was impressive today,” he told Latino Rebels. Regarding O’Rourke’s visit to California, Villaraigosa added: “I think it is important, you know, we are the largest state, the most diverse state, the fifth economy in the world. I’m glad that he came here, not like many that come here looking for an ATM. He came here to actually speak to the people of Los Angeles.” 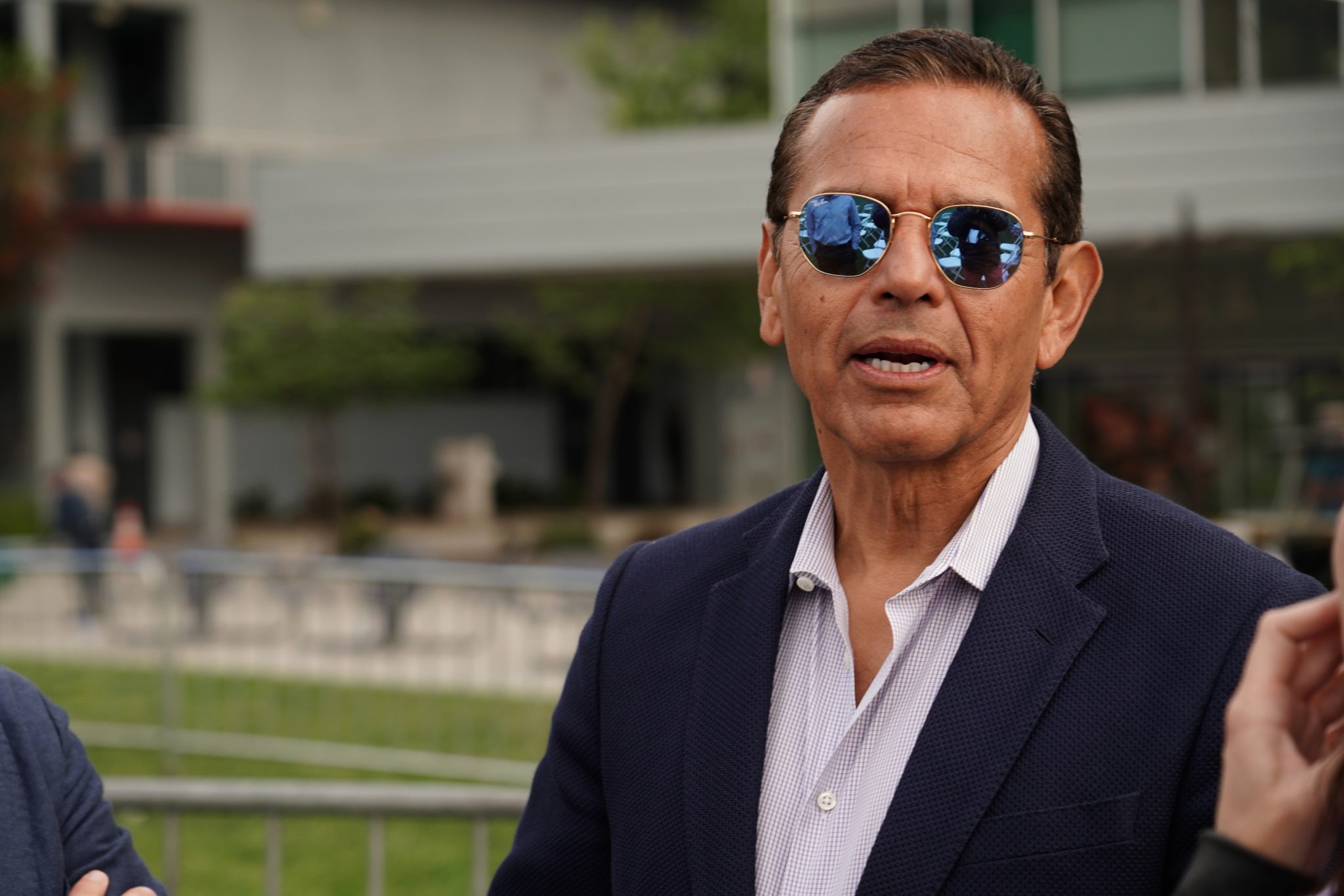 While some may have been impressed, Angelenos didn’t turn out in masses for O’Rourke just yet. Instead, many in attendance were there to learn more and make up their minds, a difficult task given so many candidates running.

Francisco Lozano is a freelance news photographer based in Los Angeles. You can follow him @FrancisLozano7.

One response to “Is LA for Beto? It’s Too Early to Tell”