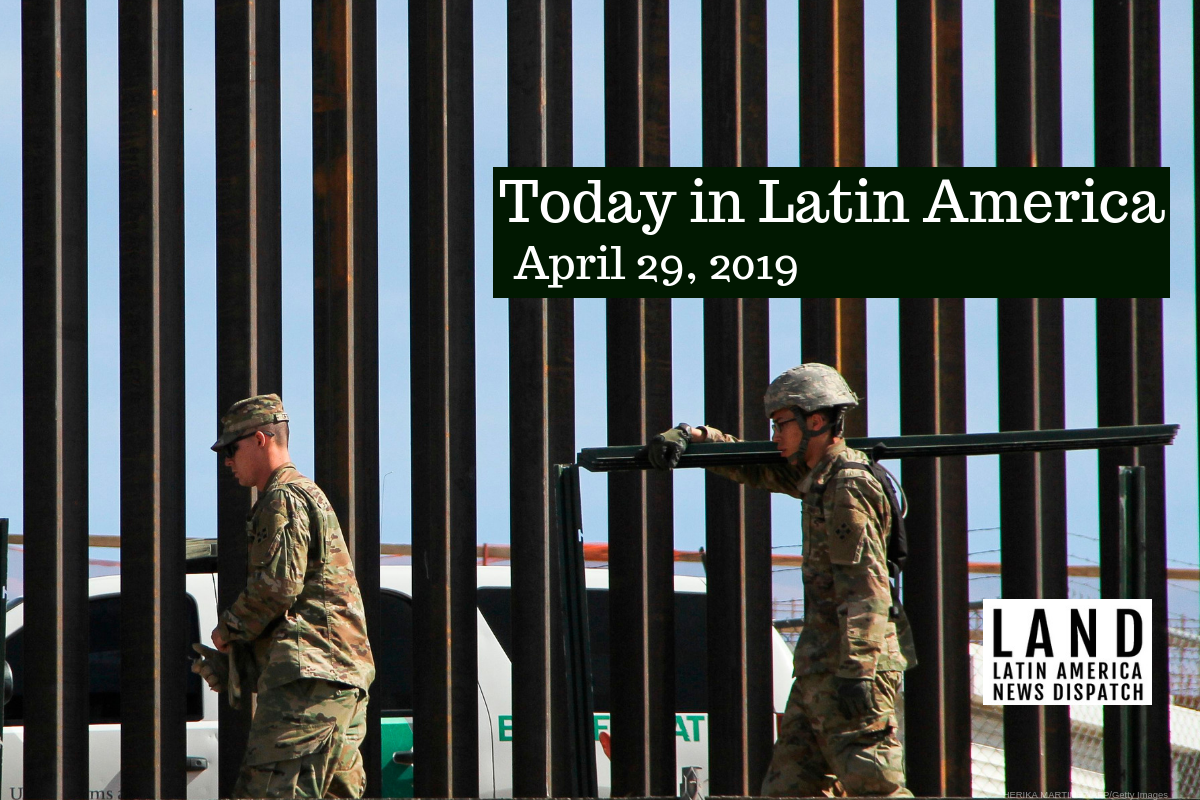 U.S.-MEXICO BORDER: The Pentagon is expected to send 300 more troops to the U.S.-Mexico border this week if a petition sent by the Department of Homeland Security (DHS) is approved by Acting Secretary of Defense Patrick Shanahan. The new military personnel would engage in roles that would put them in direct contact with migrants, like driving buses with detainees and providing food to migrants at holding facilities. Additionally, Customs and Border Patrol (CBP) announced that it will increase biometric data collection for children under 13 years of age. Yesterday, President Donald Trump insisted that the termination of the controversial family separation policy has contributed to an upsurge in illegal border crossings, dubbing the current legal framework as the “worst immigration laws ever.”

MEXICO: The National Immigration Institute (INM) reported that over 1,300 migrants escaped an immigration detention center in Southern Mexico on Thursday night. Seven hundred of them are said to have returned to the holding facilities in Tapachula, a border town in Chiapas, while 600 are still unaccounted for by the INM. Most of the migrants are said to be Central American and Cuban nationals. Detainees have condemned the living conditions of the detention center, which is said to have been at double its capacity at the moment of the escape.

MEXICO: On Friday, Mexico banned its federal agencies from doing business with the Brazilian construction firm Odebrecht for the next three years. The Mexican Office of the Comptroller also said that Odebrecht’s subsidiary in the country would also be barred from contracting with the government after “presenting false information” while working with the government. And the parent company was sanctioned for overcharging Pemex. Odebrecht has admitted to offering officials nearly $800 million in bribes to secure government contracts throughout Latin America.

MEXICO: The editor of a Mexico City newspaper received death threats after President Andrés Manuel López Obrador criticized its coverage. Juan Pardinas, Editor for the Reforma newspaper, released a statement through Article 19, a freedom of the press organization. Pardinas said he had been a victim of harassment and death threats throughout the last week, after Reforma published an article revealing the address for the president’s current residence, which he says is “public domain.” AMLO harshly criticized the newspaper during a press conference last week, launching a social media reaction under the #NarcoReforma hashtag. However, over the weekend, AMLO offered to give protection to Pardinas.

HONDURAS: In Tegucigalpa, a protest of 10,000 people against plans to privatize health and education services was met with tear gas fired by the Honduran National Police. Organizers including teacher unions and the Honduran Medical Association fear that mass layoffs and the inaccessibility to health services will result from such policy changes. Teachers and doctors lit torches and demanded that President Juan Orlando Hernández stepped down from his position.

PANAMA: Panama’s electoral court blocked the participation of jailed ex-President Ricardo Martinelli in the upcoming general election to be held on May 5. Martinelli, 67, established two candidacies: one for mayor of Panama City and another for a seat in the national legislation. Martinelli, imprisoned on charges of political espionage last June, claims he’s innocent. Over the weekend, Martinelli expressed his intentions to run for office in 2024.

TRINIDAD AND TOBAGO: At least 21 Venezuelan migrants remain missing after their boat capsized Tuesday en route to Trinidad and Tobago. The United Nations Refugee Agency confirmed that 25 Venezuelans original fled from Güiria on the boat, but only eight people have been rescued by the national coast guard. Earlier in April, Prime Minister Dr. Keith Rowley said the twin-island nation would not open a refugee camp for Venezuelan despite their influx into Trinidad and Tobago.

VENEZUELA: On Friday, U.S. officials added Venezuela’s foreign minister and a judge who ruled against opposition leaders to a list of sanctioned government officials. The U.S. Treasury Department froze the assets of Foreign Minister Jorge Arreaza and Judge Carol Padilla, and prohibited American citizens and entities from dealing with them financially. White House National Security Advisor John Bolton said the individuals were sanctioned for being complicit in the “corruption and human rights abuses” of President Nicolás Maduro. Additionally, U.S. sanctions on Venezuelan oil also came into effect yesterday, meaning that Washington will now take action against any personal or legal entity that deals with state-owned Petróleos de Venezuela (PDVSA).

CHILE: Over the weekend, a footprint discovered in southern Chile was confirmed to be the oldest ever found in the Americas. The 15,600-year-old footprint was discovered in 2010 by a group of student researchers from Universidad Austral of Chile in Pilauco, a community in the south of the country. A paleontologist for the university who oversaw studies, Karen Moreno, said that the footprint was the earliest evidence of humans in the hemisphere.

CHILE: Last Thursday, President Sebastián Piñera said he intends to draw Chinese investment to the country at a global investment forum hosted by Chinese President Xi Jinping in Beijing. The Chilean president made clear that he seeks to “transform Chile into a business center for Chinese companies.” The president’s visit to the country’s largest trading partner came just weeks after U.S. Secretary of State Mike Pompeo visited Chile and dubbed China’s intentions in Latin America as “nefarious.” President Piñera was the only Latin American head of state to be invited to the Second Belt and Road Initiative Forum in China.