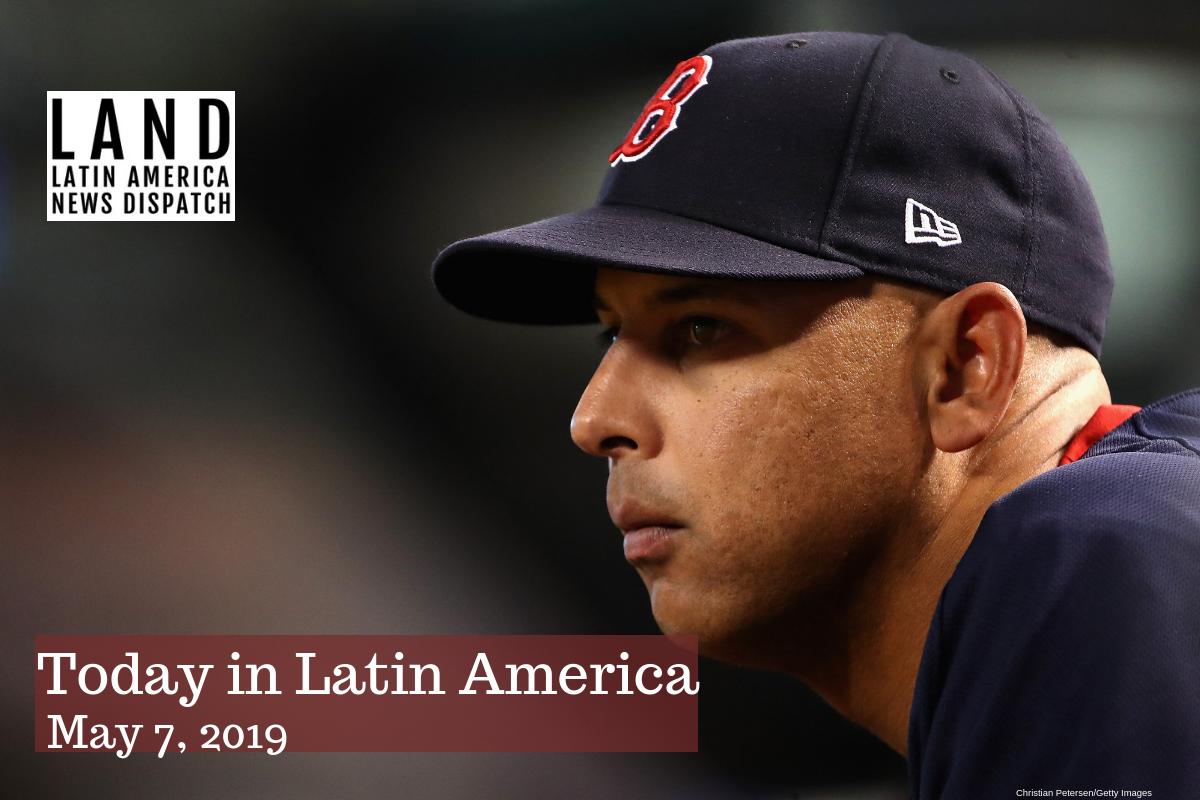 PUERTO RICO: Alex Cora, the manager of the Boston Red Sox, will not participate in his team’s visit to the White House scheduled for Thursday. A native of Caguas, Cora said he “does not feel comfortable” celebrating the World Series at the presidential residency given how President Donald Trump handled disaster relief in Puerto Rico following Hurricane Maria. In a written statement to Puerto Rican newspaper El Nuevo Día, he said, “Although the government of the United States has helped, there is still a long way to go, that is OUR reality.”

Several other Red Sox players will join Cora and skip the team’s visit to the White House.

MEXICO: Almost 6,000 people gathered in Mexico City on Sunday to protest President Andrés Manuel López Obrador (AMLO). The protesters, dressed in white, called on AMLO to resign and expressed discontent over the president’s recent rhetoric and “Robin Hood” initiatives, including the canceled Mexico City airport project. Solidarity protests were organized in cities across the country. AMLO responded to the protests yesterday saying, “They have the right to demonstrate, we are respectful of their right to demonstrate.” AMLO also announced that he would continue with his initiatives, pushing for anti-corruption “therapies” for those convicted in order to reintegrate them into society.

MEXICO: At least 90 Cuban migrants escaped from the Siglo XXI migrant detention center in Chiapas on Sunday. It was the second breakout at the facility in recent weeks, after 600 Cuban migrants escaped in late April. Rising frustration at the lack of humanitarian visas has pushed migrants to continue moving north without official documents from the Mexican government.

MEXICO: The PEMEX Strategic Safeguarding Sub Directorate released new numbers that show increasing rates of violence against oil company employees. The company reported that attacks on employees by fuel theft gangs rose from only four cases in 2013 to 207 in 2017 and 162 in 2018. PEMEX has reported 23 cases this year, and AMLO continues to wage war over fuel theft across the country.

CURAÇAO: A vessel linked to the Church of Scientology will remain quarantined in the shores of Curaçao for another night. Yesterday, island authorities took 277 blood samples and sent them to the Netherlands for further testing. Results are expected today or tomorrow. The vessel is owned and operated by the Church of Scientology, which has not yet made a statement about the ongoing situation.

PANAMA: In his first interview as president-elect, Laurentino Cortizo told Reuters that the U.S. might “lose out to China” if it does not cultivate its relationship with Central America. Cortizo stated that Washington “needs to pay more attention” because Beijing is “making advancements.” Just like El Salvador and the Dominican Republic, Panama recently cut diplomatic ties with Taiwan in favor of China. Throughout the campaign trail, all of Panama’s presidential candidates, including Cortizo, vowed to finalize the details of a trade deal with China.

VENEZUELA: Foreign Minister Jorge Arreaza announced from Moscow yesterday that Russian military presence in Venezuela could be expanded. Trump and the opposition led by Juan Guaidó have accused Russia and Cuba of propping up President Nicolás Maduro. Russia has a history of selling weapon systems such as the S300 air defense system to Venezuela. In late March, the Kremlin sent two military transport planes with supplies and advisors to Caracas, prompting Trump to tell Russia it “has to get out” of Venezuela.

BRAZIL: Hundreds of high schoolers, professors and university students protested yesterday against education budget cuts. The protesters chanted “Bolsonaro, keep your hands off my school” outside a military academy where President Jair Bolsonaro was speaking. Bolsonaro already plans to open more military schools to combat “leftist indoctrination.” Bolsonaro has launched an assault on what he perceives as Marxist influence in Brazilian public education. His government proposed last week to cut funding to philosophy and sociology programs, as well as a 30% cut across the board to public universities.

ARGENTINA: Victims and international organizations demanded a trial yesterday for Catholic priests accused of raping deaf and mute children. At least 20 children were victimized at the Provolo Institute in Mendoza by Nicola Corradi and three other priests. Corradi was arrested in 2016, but activists say the process is taking too long. Activists have requested that Pope Francis return to his homeland to enforce his “zero tolerance” pledge against clergy who have committed sexual abuse. Ninety-six priests, nuns and brothers have been publicly accused of abuse in Argentina.