A World Without Immigration Detention Is Possible

Kimora Adetunji, 33, is seen with her son King, 2, outside Federal Court in Toronto in May 2017, where indefinite immigration detention was subject of a court hearing. Her husband was detained for almost a year before being released. (THE CANADIAN PRESS/Colin Perkel)

Canada detains between 6,000 to 8,000 people each year in three immigration holding centers and provincial correctional centers. Ricardo Scotland, a 38-year-old Barbadian single father to a 13-year-old daughter, was subjected to so-called “preventive” detention for 17 months in the Niagara Detention Centre.

The justice who eventually certified his release described Scotland’s incarceration as without “rationale.”

Scotland’s case exemplifies some of the injustices associated with immigration detention. Law requires that civil detention be non-punitive, non-arbitrary and a last resort. Yet quasi-punitive detention of migrants is experiencing a meteoric and global spread.

Think of how the United States had incarcerated more than 44,000 individuals for ostensibly immigration-related reasons as of June 30, 2018. Or the incarceration of “boat people” in offshore processing centers in Nauru and Papua New Guinea. Or the European Union’s frontier “hotspots”, internal security governance and efforts to disrupt the flow of migrants from Sudan and sub-Saharan Africa into Europe.

As almost every country around the world detains asylum-seekers or other migrants, they are relying on detention to deter, punish and serve a variety of other purposes. Canada, Australia, the European Union and the United States are also supporting or pressing each other to adopt and expand detention systems.

The law frames detention as an administrative step in someone’s migration in to or out of a country. Yet unwarranted detention leaves long-lasting emotional, psychological and psychosocial scars.

Canada detains mostly males, like Scotland, but also incarcerates women, children, the mentally ill and the disabled even though they haven’t been charged with any offenses. Federal spending on detention in the Toronto area alone amounts to $30.5 million per year.

The Canadian detention system is largely unchecked by social or legal reform efforts. Canadian courts are reluctant to intervene, even to address breaches of constitutional rights. A pending decision from the Supreme Court of Canada will determine whether detainees across Canada can access the remedy of habeas corpus, long considered one of the most fundamental of all human rights, to challenge the basis of their detentions. Journalists, researchers and human rights monitors are also routinely denied access to Canadian detention sites.

There is therefore a pressing need to renew and reinvigorate dialogue that tackles the roots of the problem. We need to focus not only on incremental reforms but how to ameliorate the social, legal and economic conditions leading to and reinforcing detention.

The Urgent Need for New Thinking

But none of these efforts can produce a plan for migration governance not reliant upon, let alone complicit in, immigration detention. Piecemeal reforms cannot restore basic rights, respect and dignity to migrant communities.

The thinking on migration governance must turn away from detention. It can look to the abolition movement’s recent breakthroughs in United States, Australia and the international political dialogues that are rethinking the necessity of prisons in the administration of justice. The growing open borders and No Borders movements are challenging how countries allocate citizenship-related rights and protections. These movements are making important connections to Indigenous solidarity, prisoners’ rights and other progressive human rights campaigns that are challenging an unfair and unjust status quo. 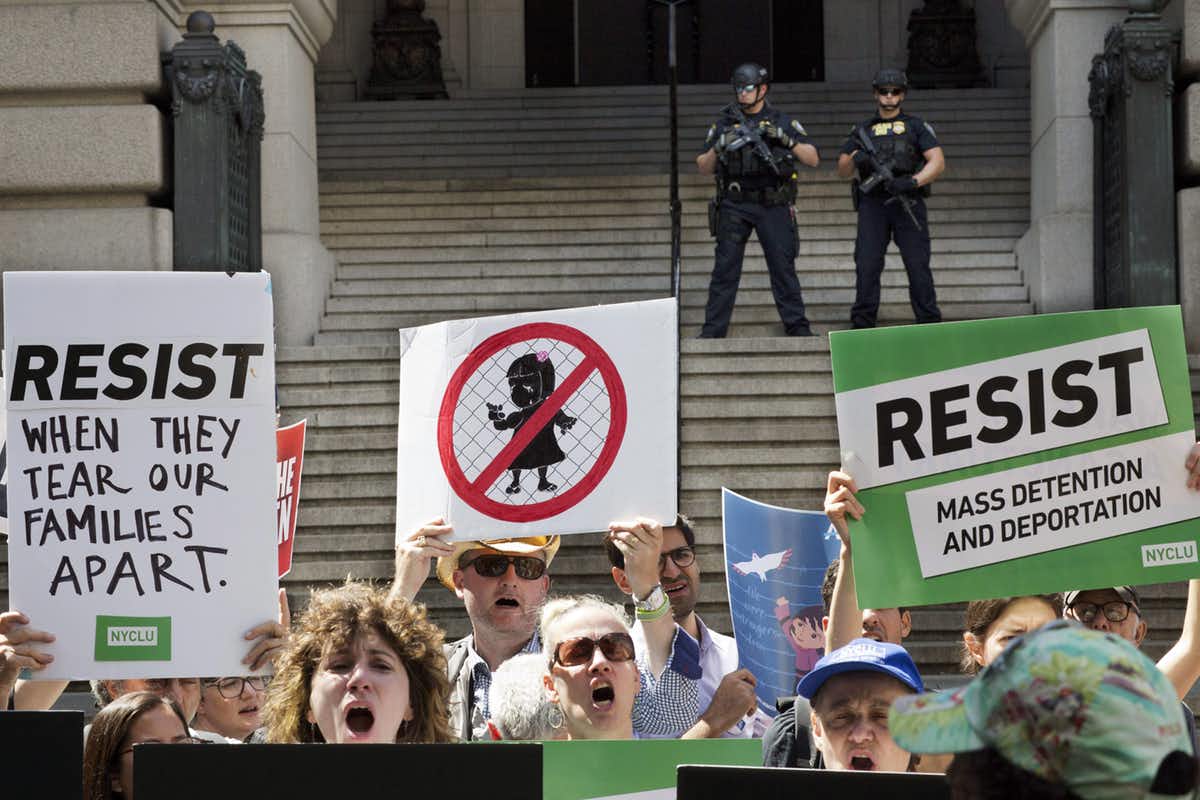 Protesters hold up signs and chant slogans as they are watched by guards at the U.S. Department of Homeland Security in July 2018. They were protesting the separation of children and parents who are detained by Immigration and Customs Enforcement (ICE). (AP Photo/Mark Lennihan)

Efforts are afoot to challenge imprisonment alongside the structural forms of oppression that enable them, including poverty, inequality, xenophobia and prejudice towards all racialized people. Detention clearly should not be the answer to the question of who gets to migrate where.

The “De-Carceral Futures: Bridging Prison and Immigration Justice” workshop is being held this week with our colleagues from the Faculty of Law, Cultural Studies and Philosophy at Queen’s University, along with Trinity College at the University of Toronto and the Walls to Bridges education program that offers for-credit courses involving equal numbers of incarcerated (“inside”) students and university/college-based (“outside”) students learning together as peers.

Thought leaders, practitioners, activists, students and people who experienced detention will work towards rethinking immigration and border policies. The public, live-streamed keynote plenary will open minds to the real possibility of ending detention.

Our perspective starts from a premise that migration governance without immigration detention is desirable and achievable. Eliminating all detention will universally benefit citizens, migrants and everyone in between.

Imagining a world without detention means believing that all communities can live without fear of police and authority figures. It envisions equal opportunities that flourish and replace racialized, classed and gendered hierarchies. It imagines much-needed taxpayer dollars that are used not to indefinitely incarcerate men like Scotland, but towards efforts to construct and maintain an anti-racist, multicultural Canada.

2 responses to “A World Without Immigration Detention Is Possible”