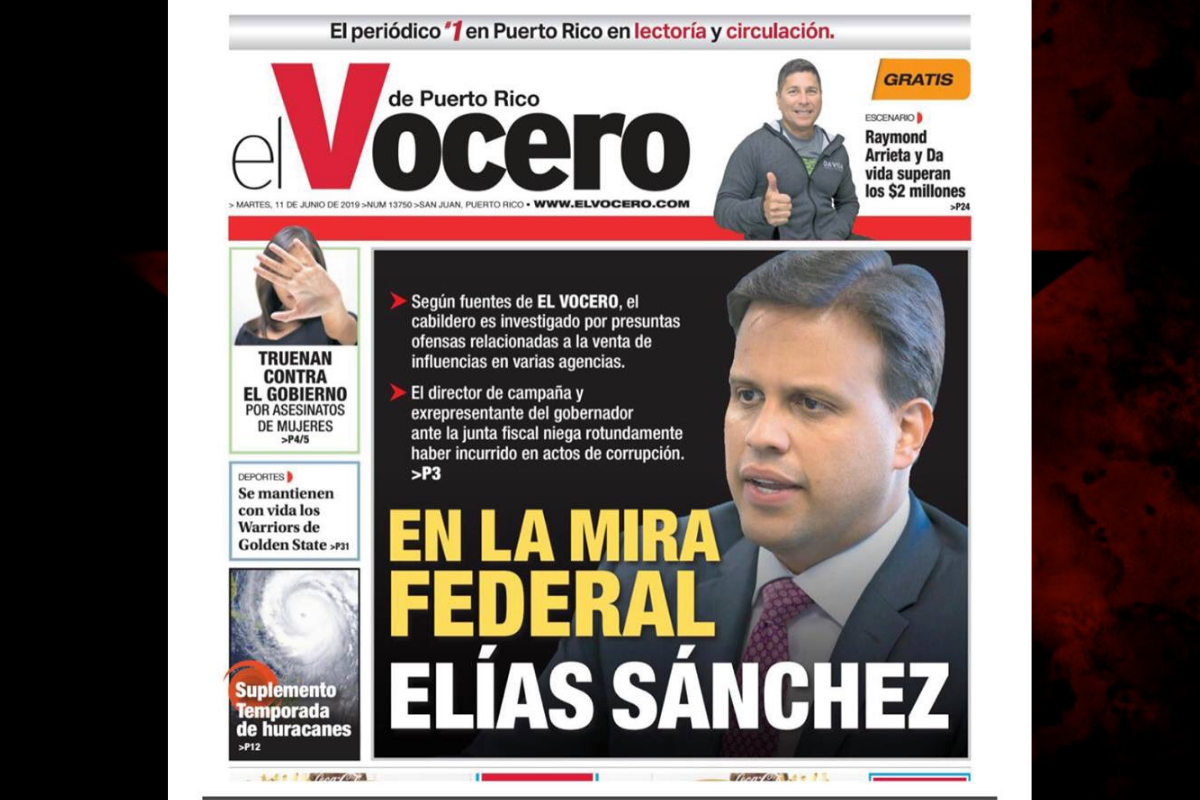 On Tuesday morning, reports poured in that the FBI opened an investigation into government lobbyist Elías Sánchez, a longtime friend of Puerto Rican governor Ricardo Rosselló, for alleged influence peddling.

Sánchez, Rosselló’s former campaign manager who later served as the governor’s representative on the Fiscal Control Board, is accused of using his position as a government lobbyist to trade in influence with government agencies, especially the Department of Education.

In June of 2017, Sánchez resigned from his post as Board representative, and since then has done work for the Wolf Popper law firm, which has had contracts with the Puerto Rico government since 2009. El Vocero reported that the firm currently has a million-dollar contract with the Department of Education.

Through a written statement, Sánchez denied his involvement in any corruption, saying that any allegation in that direction is false.

“I have not committed or participated in any act of corruption,” he expressed.

Sánchez said he welcomes any investigation with absolute certainty that he has never engaged in illegal activity.

Rosselló, who in a past interview with Reuters described Sánchez as a “good friend,” quickly backed him up, praising his past work as campaign manager and Board representative. Rosselló, who is currently away from Puerto Rico on business, said in a written statement that “Elías Sánchez has been categorical in his expressions, denying any type of act of corruption and has welcomed any investigation… Our public policy is clear: zero tolerance for corruption. No one is above the law.”

This is not the first time Sánchez has been under fire. After resigning from the Board, PPD Senator Aníbal José Torres accused Sánchez of using privileged information for financial benefit. Later that year, local news connected Sánchez to the infamous Whitefish contract, but he denied having any involvement.

The FBI’s inquiry comes a week after veteran journalist Carmen Enid Acevedo released a statement saying her mother was threatened in a parking lot by an unknown man with a fake mustache after she had begun to investigate Sánchez’s lobbyist work. She made a formal complaint with local authorities and the Bureau.

Acevedo, who runs Bonita Radio, began looking into Sanchéz’s contracts and influence with the Department of Education. She says her investigation is still in progress.

“He has been very public with denying facts, but he won’t face people who ask questions about his role as a government lobbyist,” Acevedo told Latino Rebels.

The journalist called out Sánchez and the Rosselló government in general for their constant lack of transparency, pushing journalists to either make complaints or sue.

“I hope the investigation sheds light on what journalists have been inquiring about for a while,” she added.

The investigation inquiry into Sánchez was filed through the New York Southern District Court. The FBI has yet to comment on the nature of the investigation.

Natalia Rodríguez Medina is the 2019 summer correspondent for Latino Rebels. She is a member the Craig Newmark Graduate School of Journalism at CUNY’s Class of 2019. Natalia tweets from @nataliarodmed.