With Boots on the Ground, Mexico Increases Migratory Policing 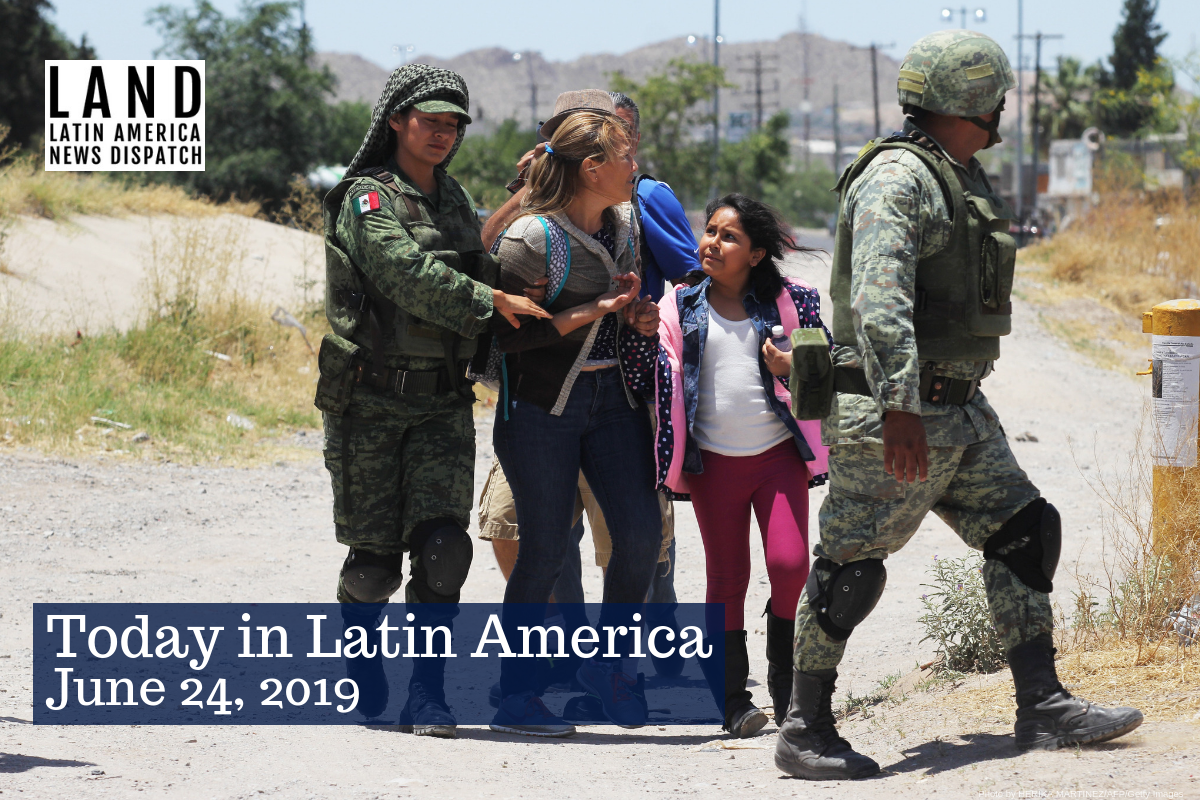 MEXICO: Mexican security forces began intensifying their crackdown on Central American migration over the weekend. Security forces have reportedly detained over two hundred migrants after officials declared that the deployment of six thousand National Guard agents was “complete” on Friday. Mexican media are reporting that 146 migrants were apprehended in a residence located in San Juan del Río, Querétaro, whereas the Associated Press reported 100 migrants being transported to a detention center yesterday. Elements from the Mexican security forces also prevented migrants from crossing into the United States in the border town of Ciudad Juárez.

MEXICO: Starting on June 21, the government began auctioning several properties seized from drug traffickers. Ranches with several hectares of land, luxury apartments, and mansions with pools and escape tunnels were among the twenty-seven properties scattered around eleven states up for sale. Only nine properties were sold over the weekend, collecting around 56.6 million pesos ($2.96 million). President Andrés Manuel López Obrador said that the funds would be reinvested in “poor communities” in the state of Guerrero.

JAMAICA: Thousands of Jamaicans congregated in the capital for the funeral service for former conservative Prime Minister Edward Seaga, in office between 1980 and 1989. During the service, the former leader of the Jamaican Labor Party (JLP) was recognized as a “champion of regional integration” and a “West Kingston transformer.” In his Washington Post obituary, Seaga is recognized as Ronald Reagan’s closest Caribbean ally and is linked with state-sponsored violence of the era, when the JLP used “gun-toting gangsters” to sway votes in their favor.

DOMINICAN REPUBLIC: A domestic court has ordered an ex-leader in the Dominican Senate and former minister of public works to face trial in a corruption scandal involving construction conglomerate Odebrecht. Former Senate president Andrés Bautista García and Minister Víctor Díaz Rúa allegedly received bribes from Odebrecht between 2001 and 2014. Four other individuals will also face trial, including businessman Ángel Rondón, who along Día Rúa became the primary beneficiaries of the multimillion-dollar corruption scheme.

EL SALVADOR: President Nayib Bukele has asked phone companies to “completely block” signal near Salvadoran penitentiaries. On a Twitter post on Friday, Bukele announced that the four leading mobile providers in El Salvador —Digicel, Movistar, Tigo, and Claro— have “72 hours” to comply with the order, meaning that the signal should be disabled starting today.

The initiative seeks to thwart the criminal gangs’ abilities to conduct operations like kidnapping and extortion from within prisons.

NICARAGUA: On Friday, the Canadian government and the United States Treasury imposed economic sanctions on four high-ranking members of Daniel Ortega’s regime. These include the head of Nicaragua’s National Assembly, Gustavo Porras Cortés; the chief of the state-owned telecommunications company, Orlando Castillo Castillo; Minister of Health, Sonia Castro Gonzalez; and Minister of Transportation, Oscar Mojica Obregón. These punishments freeze their domestic and international assets, barring them from engaging in any monetary transactions.

VENEZUELA: Six members of the country’s security forces were arrested over the weekend. Family members of the detained officers denounced that the arbitrary detention took place Friday, the same day UN Human Rights Commissioner Michele Bachelet called for all “prisoners” to be released and left the country. Via Twitter, the relatives of Air Force Brigade General Miguel Sisco Mora and Captain Rafael Acosta demanded the Venezuelan government to disclose the officials’ whereabouts.

BOLIVIA: An urban art project commissioned by the Bolivian government seeks to use indigenous imagery to transform and revitalize a neighborhood in La Paz. Murals include depictions of Aymara women selling produce, hummingbirds taking flight, and multicolored geometric shapes reminiscent of the Wiphala —the square-shaped flag for indigenous communities in the Andes—, which decorate the walls of the Chaulluma neighborhood in the capital. Known as Mi Qhatu (“market” in Aymara), the project cost an estimated 4.5 million bolivianos ($624,000).

CHILE: On Saturday, the Chilean foreign minister announced that Venezuelans seeking asylum in the country would be able to apply for a “democratic responsibility” visa. This particular document grants applicants a temporary residence permit for one year, which can be extended once, and subsequently allowing for a permanent residence application. Venezuelans will be able to begin applying for the visa in any Chilean consulate in the world today.

BRAZIL: An estimated three million people participated in São Paulo’s Pride Parade yesterday. The massive crowds paraded down the city’s main thoroughfare, Avenida Paulista, where members of the Brazilian LGBTQ community commemorated the 50th anniversary of the Stonewall riots in New York City, which will host World Pride on Sunday, June 30. Amid a tense political climate, local and international performers participated in the 23rd edition of the largest Pride Parade in Brazil, known as the “best” in the world by HomeToGo, a tourism website.