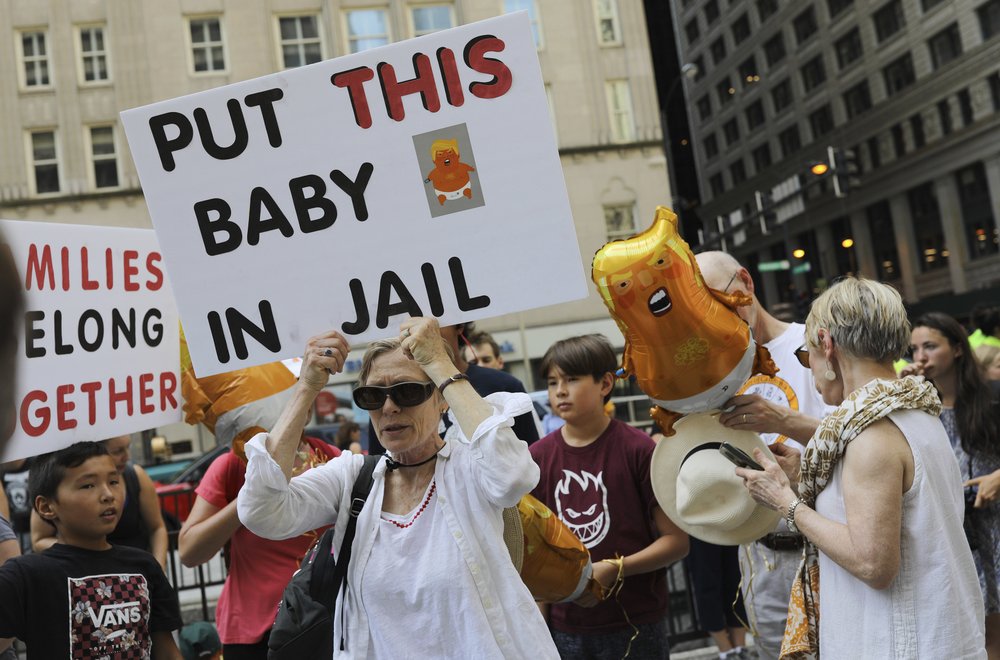 Thousands of people, including immigrants and their supporters, rally against President Trump’s immigration policy, especially the detention of children, marching from Daley Plaza to the Chicago field office for Immigration and Customs Enforcement,, Saturday, July 13, 2019 in Chicago. (Abel Uribe/Chicago Tribune via AP)

A dozen churches in the Los Angeles area have declared themselves sanctuaries for migrant families as the Trump administration’s immigration crackdown is scheduled to begin.

Guillermo Torres, with Clergy and Laity United for Economic Justice, says more churches have become involved than ever before, which he attributes to a growing sense of indignation at the administration’s actions on immigration.

President Donald Trump announced plans for sweeps that are expected to begin Sunday and target about 2,000 people with deportation orders in major cities, including Los Angeles. Torres said Sunday that there had been no reports of arrests.

Pastor Fred Morris says the mere threat of roundups has already spread widespread fear in the community. He says he counseled his largely Hispanic congregation on what to do if agents arrive: don’t open the door, don’t answer questions.

Many houses of worship in other cities and states have also declared themselves immigrant sanctuaries.

A group of Chicago aldermen and activists are patrolling the city on bike to look for immigration authorities detaining people as part of broader federal immigration sweeps.

Roughly 65 people are taking part in Sunday’s bike patrol, which is focusing on the immigrant-heavy neighborhood of Albany Park on the city’s northwest side.

Federal officials haven’t released details of their operation. Immigrant communities have been on edge since President Donald Trump’s administration announced plans for the sweeps that are expected to target about 2,000 people with final deportation orders in at least nine major cities, including Chicago.

Alderwoman Rossana Rodriguez says the idea is to keep people informed. She says bikers will ride in shifts, possibly for several days.

She says an attorney is also available to help people who do get detained.

The Trump administration’s nationwide crackdown on immigrants is expected to begin this weekend, targeting migrant families in cities across the country.

Immigrant communities have been on edge since President Donald Trump’s administration announced plans for the operation, inflaming the political debate over immigration. The American Civil Liberties Union filed a pre-emptive lawsuit Thursday that aims to protect asylum seekers. Activists held demonstrations and advocates coached immigrants on their rights.

Administration officials have said that the coordinated action will target about 2,000 people with final deportation orders in major cities, including Chicago, Los Angeles, New York and Miami.