In Lead Up to 2020, Latinos Strongly Reject Racist Attitudes and Language 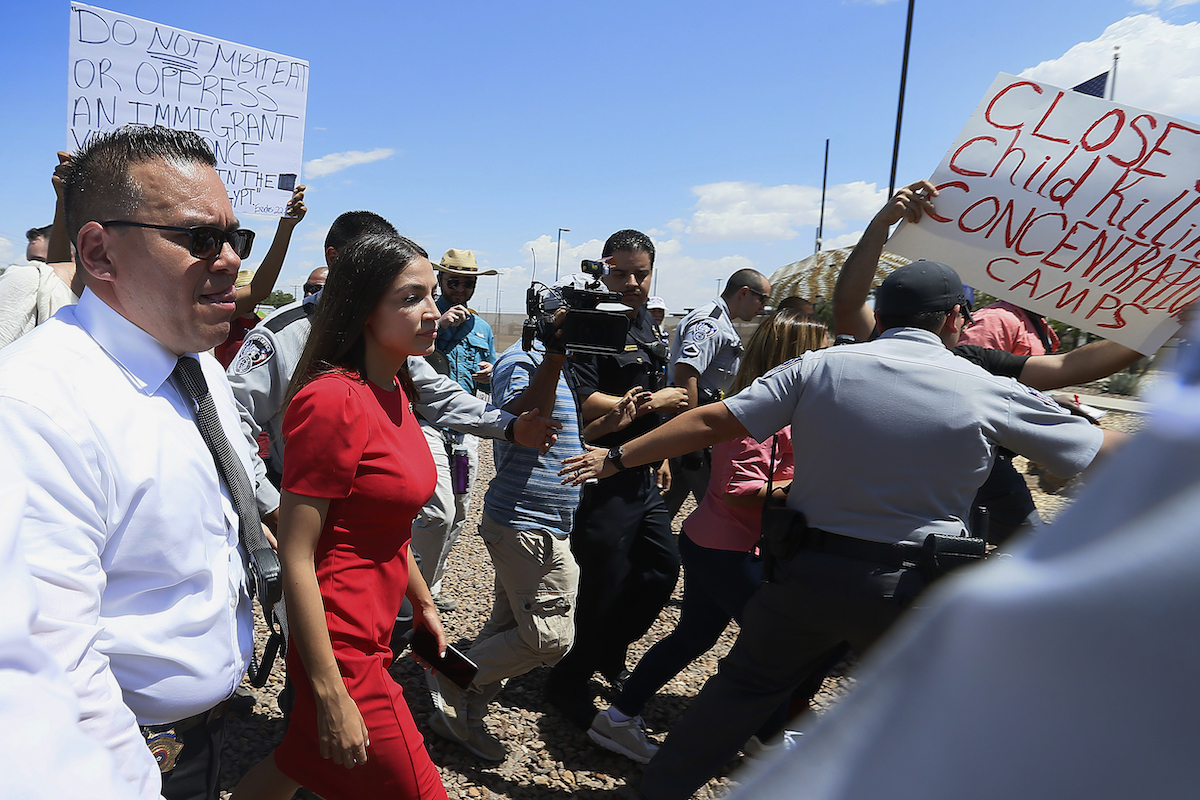 U.S. Rep. Alexandria Ocasio-Cortez, D-New York, is escorted back to her vehicle after she speaks at the Border Patrol station in Clint about what she saw at area border facilities Monday, July 1. (Briana Sanchez / El Paso Times via AP)

President Donald Trump’s incendiary language over the weekend triggered yet another media and public firestorm on the issue of race. His attacks targeting four non-white congresswomen and telling them to go back to their “home countries” led critics, including some prominent Republican observers, to call upon the president to retract and apologize. Other Republicans and conservatives defended Trump’s comments.

What do Latinos think about episodes like this? Three recent polls by Latino Decisions provide a number of important clues to answering this question.

In general, Latinos perceive racism to be a significant problem facing their community, according to the Univision News pre-Democratic presidential debate poll conducted in late June by Latino Decisions and North Star Opinion (n=1,007; margin of error +/- 3.1%). About half of all Latinos (51 percent) agree that “racism against Latinos and immigrants today” is a major problem, and another third (35 percent) say it is “somewhat of a problem.”  All told, that’s a sizable portion at 86 percent who think anti-Latino racism is a problem today.  And this view holds across virtually every demographic sub-segment within the Latino community, as noted in the crosstabs below.

Latino perceptions of racism are in fact slightly higher over recent months: In an April 2019 poll for NALEO (n=606; MoE +/- 3.9%), a combined 81 percent of Latino respondents said racism against Latinos and immigrant was a problem today (51 percent major problem and 30 percent somewhat). It is clear that Latino voters are keenly perceptive of this current political environment, no longer just directed at immigrants, but U.S. born Latinos as well, such as Congresswoman Ocasio-Cortez.

A combined 76 percent of Latinos in the Univision survey agreed with the statement, “When I hear some Republican politicians talk about immigration and border security, it makes me feel like they don’t want Latino immigrants in this country,” with 44 percent agreeing strongly and 32 percent agreeing somewhat.   In the NALEO poll 51 percent of Latinos said they thought Trump and the Republicans were being hostile towards Latinos, with an additional 29 percent stating Republicans don’t care about Latinos.

Results from the UnidosUS 2020 Latino Electorate Survey conducted by Latino Decisions in June 2019 (n=1,854; MoE +/-2.3%) demonstrate how much Latinos value racial diversity in the politicians they support. Almost every Latino in America values politicians who show respect for diversity. Seventy-six percent of Latinos said a 2020 presidential candidate who “values diversity and brings people together” was very important to them, and another 20 percent said it was somewhat important to them. At 23 percent, it ranked first among Latinos when asked to cite which characteristic matters most to them.

In addition, fully 66 percent of Latinos said the statement, “I am frustrated with how President Trump and his allies treat immigrants and Latinos, and I worry that it will get worse if Trump is re-elected” was true for them, with another 22 percent saying it was sometimes or somewhat true. Remarkably, only 11 percent dissented from this view.

Trump’s actions and words severely damage the electoral prospects of other Republicans. Among Latinos who have never voted for GOP candidate, three in five (60 percent) said they would consider voting for a “Republican candidate who spoke out against President Trump’s harsh policies, treated Latinos with respect, and worked to create more humane immigration laws.”  In the Univision poll, while 45 percent of Latinos said the Republicans words and actions on immigration mean they will never consider voting for them again, the poll also found 34 percent who agreed that “some Republicans have reasonable positions on immigration, but it is hard to consider supporting them with Trump as President.”

Trump’s politics are dividing America. Some believe Trump benefits politically and electorally from accentuating these divisions, but this was not the case in 2018.  As Arizona begins to transition to a blue state, other states like Texas won’t be far behind—closing the door on a future Republican presidency for a generation or more. In 2018 Trump played the racist attack card against migrants and his party lost badly. As we documented in the Latino Vote Project, Latino turnout was way up in 2018 and Democratic vote share also increased over the 2014 midterms. Looking ahead to 2020, what’s certain is that the vast majority of Latinos in the United States value diversity and unity over division and racially-charged politics—and will bring those values to the ballot box during the 2020 Democratic primary and subsequent general election to stand up and reject the perceived racist attacks against immigrants and Latinos.