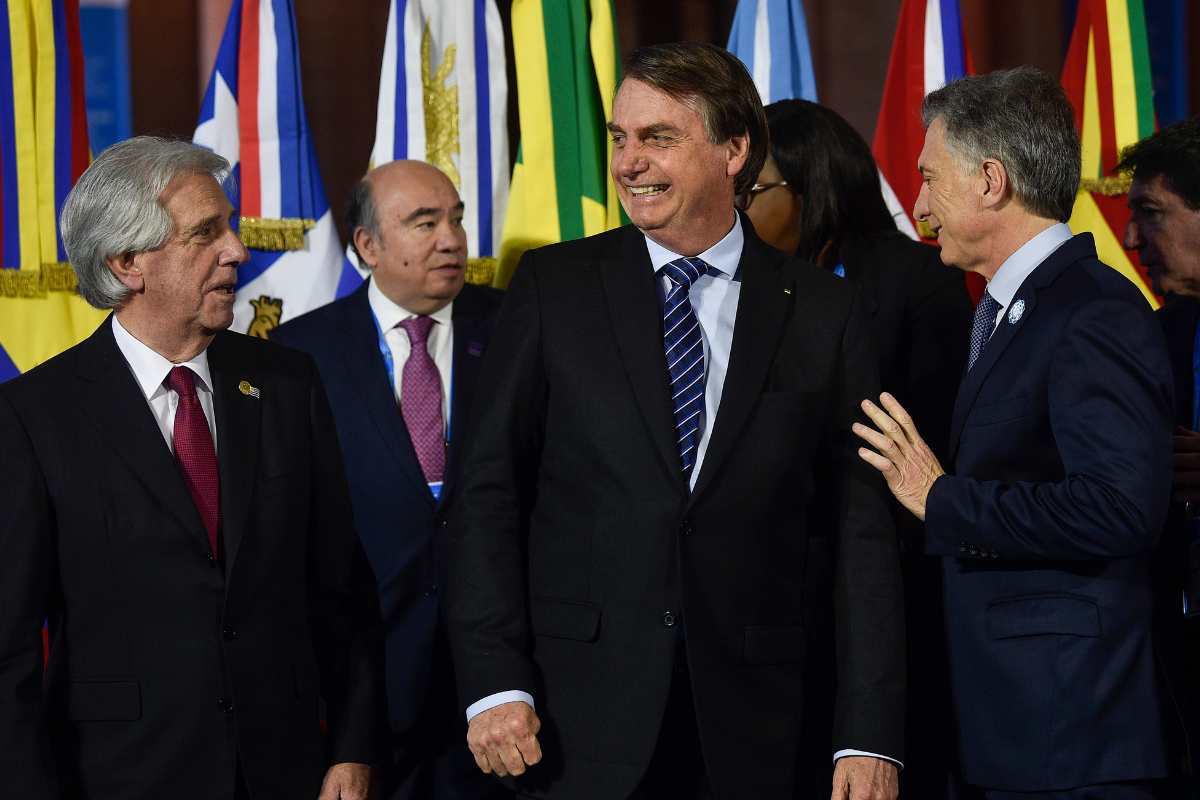 “We don’t want a ‘Great homeland,'” the far-right Bolsonaro said at a meeting of the Mercosur trade bloc, using a frequent slogan of Venezuela’s late socialist leader Hugo Chavez to refer to the regional integration of South America.

“We want every country in South America to be autonomous, democratic, and that each country can be great. Just like Trump says that he wants to ‘Make America great again,’ I want to make Brazil great, Paraguay great, Bolivia great, Uruguay—all of our countries.”

The meeting of the Mercosur group —Argentina, Brazil, Paraguay and Uruguay— comes after the bloc’s June 28 signing of a trade deal with the European Union following two decades of negotiations.

Bolsonaro sought to strike a marked difference with the center-left politics that dominated Mercosur until a rightward shift in politics left the region more polarized than it has been in decades.

“We can’t allow what’s happening in Venezuela to happen to another country,” he said about the crisis-torn nation that was suspended from Mercosur in 2017 for failing to uphold democratic norms amid an intensifying crackdown on dissent.

“How can a country as rich as Venezuela reach this point? We all know that all of this was born out of populism and the irresponsibility of a power project on a country that knew no bounds…,” Bolsonaro said.

The United Nations estimates that more than 4 million Venezuelans have fled their country’s economic and humanitarian crisis in recent years in what has become the largest exodus in modern Latin American history.

Dozens of nations say Venezuelan President Nicolás Maduro won a new presidential term in an illegitimate election last year. Juan Guaidó, head of the opposition-dominated congress, has won recognition as the country’s rightful leader from more than 50 nations, including the United States, but he has been unable to wrest power from Maduro.

Argentina, Brazil and Paraguay also recognize Guaidó as Venezuela’s leader, but Mercosur has not done so, because the center-left government of Uruguay opposes doing that.

Turning to trade, the Mercosur leaders agreed Wednesday to try to speed up the implementation of the free-trade agreement with the EU. The deal, which came amid global trade tensions and rising protectionism, has been hailed as a way to integrate the blocs into a market of some 800 million people. But it must still be ratified by the legislatures of the countries involved and it has raised concerns about competition on both sides of the Atlantic.

The French government recently said it was not yet ready to ratify the pact, saying Brazil must “respect its commitments” to protecting its rainforest. Before the deal was finalized, French President Emmanuel Macron had said France would not sign if Brazil did not continue within the Paris climate agreement.

“We hope it benefits all of the citizens of our countries,” Uruguayan President Tabaré Vázquez said Wednesday.

The deal would integrate nearly a fourth of the world’s gross domestic product and more than $100 billion in bilateral trade of goods and services.

The European Commission has said it would also remove most tariffs on EU exports to Mercosur, cutting more than 4 billion euros ($4.5 billion) worth of duties each year. The commission says the agreement is particularly important for industrial sectors like cars and car parts, machinery, chemicals and pharmaceuticals. Mercosur hopes to benefit with more exports of its agricultural products, including beef, poultry and sugar.

“It’s a clear sign to the world that Mercosur must be an open and dynamic bloc,” Macri said. “It must have clear rules for businesses and investments.”