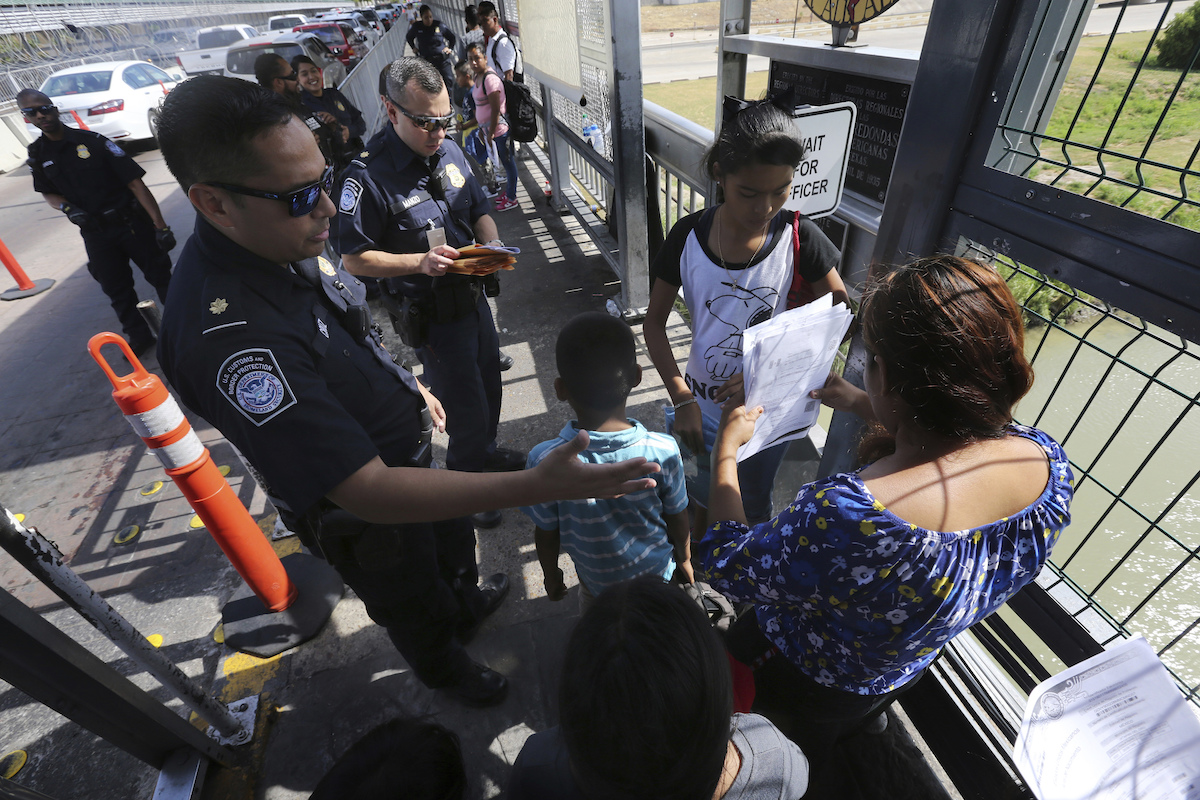 In this July 17, 2019, file photo, a United States Customs and Border Protection Officer checks the documents of migrants, before being taken to apply for asylum in the United States, on the International Bridge 1 in Nuevo Laredo, Mexico. (AP Photo/Marco Ugarte, File)

WASHINGTON (AP) — A federal judge said Wednesday that the Trump administration can enforce its new restrictions on asylum for people crossing the U.S.-Mexico border while lawsuits challenging the policy play out.

U.S. District Judge Timothy Kelly denied a request for a temporary restraining order, saying the immigrant advocate groups behind the suit did not show that their work would be irreparably harmed if the policy moved forward. Kelly is an appointee of President Donald Trump.

The groups sued on behalf of themselves as nonprofit groups that offer services to immigrants who would be unable to seek asylum under the new restrictions.

A separate hearing on a similar suit was scheduled later Wednesday in San Francisco. U.S. District Jon Tigar, overseeing that case, has already barred less restrictive policies on asylum from taking effect and could act to block the new asylum policy. Tigar was appointed by President Barack Obama.

It was an unusual victory for the administration, even if a temporary one. Federal courts have repeatedly stopped the administration from enforcing many of its proposals cracking down on people crossing the border.

The latest proposal prevents most migrants at the southern border from seeking asylum in the U.S. if they passed through another country first. It targets the tens of thousands of Central American adults and children who cross Mexico every month to try to enter the U.S. It also would affect asylum-seekers from Africa, Asia, and South America.

U.S. law allows refugees to request asylum when they arrive, regardless of how they did so. There is an exception for those who have come through a country considered to be “safe.”

At the northern border, the U.S. and Canada have a “safe third country” agreement that limits people who arrive in one country from seeking asylum in the other. The U.S. has sought to reach the same agreement with Mexico and Guatemala, but Guatemala’s high court blocked a possibly agreement. Mexico has said no agreement has been decided.

Top U.S. officials say their latest plan would discourage migrants from leaving their countries, which is necessary to reduce the numbers of people that U.S. border agents are detaining. Reports of squalid conditions at some U.S. border detention facilities have sparked mass outrage, and advocates accuse the administration of unnecessarily detaining people seeking asylum and mistreating people in custody.

The plan has exceptions.

If someone has been trafficked, if the country the migrant passed through did not sign one of the major international treaties that govern how refugees are managed (though most Western countries have signed them) or if an asylum-seeker sought protection in a country but was denied, then a migrant could still apply for U.S. asylum.

The policy went into effect Tuesday, one day after it was announced, though some officials said it was only being put in place in one location. Hundreds of immigrants still showed up at U.S. border crossings trying to request asylum but with their prospects uncertain.

Associated Press writers Colleen Long in Washington and Nomaan Merchant in Houston contributed to this report.