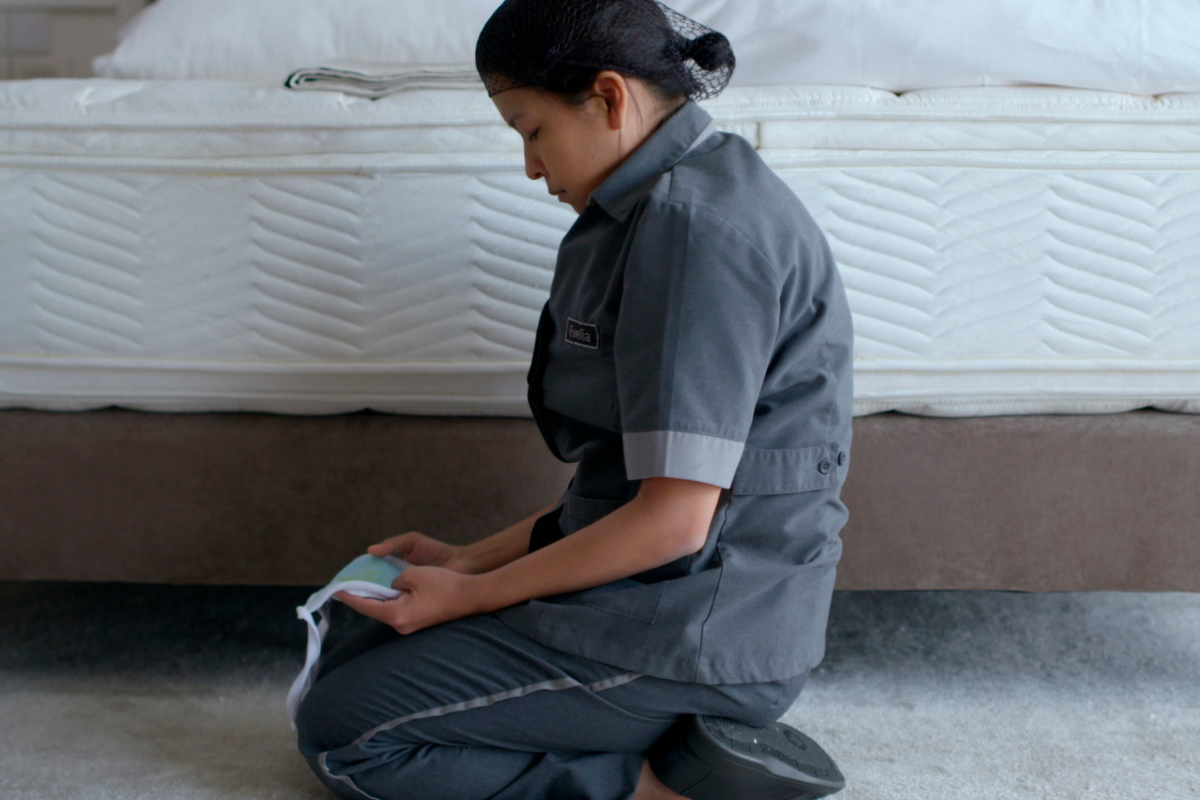 Cinema has a lot of narratives showcasing subservient maids, which oftentimes are one-dimensional, supporting characters at best. But as of late, particularly in Latin American cinema, domestic workers have been portrayed in more well-rounded ways, as Slate’s Inkoo Kang writes. While complexity has been brought to the narratives centering domestic workers, the question bears repeating: is it hard to make a film where the lead character is more than just a “loyal servant?” With The Chambermaid, director Lila Avilés proves it can be achieved.

In her debut feature, Avilés focuses on the intricate character study of a hotel worker in one of Mexico City’s most luxurious hotels. At the center is Evelia (played by Gabriela Cartol), or as she prefers to be called “Eve,” who’s a hard-working woman. Humble, shy, efficient and proud of her work, she is the epitome of a perfect employee. Bosses compliment her and fellow co-workers tease her for being the “favorite.”

From the beginning, we get shots of how meticulous Eve is at work —the folding of sheets, the fluffing of pillows, the dusting off of floors— that dreary nature of her routine. The film’s stationary camera, wide to medium shots and focus on the quotidian is reminiscent of Belgian director Chantal Ackerman’s Jeanne Dielman, 23 Commerce Quay, 1080 Brussels. While that film was concerned about showing the routine of a housewife and the suffocating climax that leads to, here is a different story.

We actually never leave the hotel. All shots are either upstairs in guest rooms or in the basement where the workers roam the halls. It may seem claustrophobic at first, but it makes perfect sense in order to capture Eve’s daily life. She’s free yet trapped. Every room is indistinguishable from the other.

While the setting is important, make no mistake, the film is also a critique of Latin American elitism.

Whether it’s the inconsiderate American guest who treats employees as less than or an Argentine mother (Romina), whose husband is away for meetings and is therefore left alone in the room to care for her baby for hours on end, the message is that privileged people lack self-awareness and sympathy for others and their troubles. But even a harsher critique is that if they didn’t need help, they wouldn’t even look at those who are there to serve them. They couldn’t even bother to think about them.

This is precisely one of the reasons you root for Eve to get promoted to the hotel’s executive suites floor, as she so strongly wants. She definitely has the drive to get there. Eve goes the extra mile, even if it means staying too late and missing the last bus to go back home. The promotion means she’d work less hours, but will go home with more money. She’d be able to spend more time with her son. It’s a win-win situation.

Whenever Eve is not thinking about the promotion, she’s asking about a bright and fashionable red dress, which was left behind by a previous guest—and which is now up for grabs by all hotel workers. The dress even becomes a recurrent motif. This is important because it demonstrates that Eve would like to be dressed in something that’s not her shabby and gray uniform. The dress is more than just a “nice” fabric she could claim as her own. It’s a symbol of status. She always comes in contact with those of a higher socioeconomic status. She services affluent guests and occupies their spaces —for a limited amount of time— but she’s an observer, witness to a life she can ever be a part of. In that way, status is both foreign and familiar to her at the same time. She constantly steps in and out of two worlds.

And it’s fascinating to see her in and out of both worlds. The interactions she has with guests somewhat parallel those she has with her bosses.

What’s striking about the scenes Eve shares with her supervisors is that Avilés makes the conscientious decision of never showing any of their faces, except Eve’s. We only hear their voice. At times the back of a head,  a shoulder, a forearm or a hand is visible. They’re human and then they’re not.

One can interpret that in too many ways. Logically, the first thought is that they aren’t central to the story, so there’s no point in attaching a character to a face. But once you delve deeper, you begin to understand that Eve’s supervisors are representative of a whole system that exists to function as a money-making machine, benefiting the top tier.

And that’s the reason you dread every time Eve asks for an update on her promotion or the red dress she dreams of having: you already know the answer her supervisors will give her and she might know too, but she never stops asking.

In that same way she knows what her supervisors will tell her, she also knows that despite the small chit chat and banter, Romina isn’t at all interested in actually getting to know her. One is a rich woman needing assistance with her baby and the other is a woman there to do her job. She understands the unspoken boundaries. But Eve loves spending time there and looking after the baby, and one assumes it’s because she’s not able to spend enough time with her own son, whom she often leaves overnight in the care of his babysitter.

The moments she shows warmth towards her son, even if it’s on the phone, contrasts her demeanor at work. She develops a cautious friendship with her co-worker Minitoy (Teresa Sánchez). Loud and somewhat of a prankster, Minitoy helps Eve get out of her shell. They enroll in the hotel’s adult education program, play a silly game where they get shocked by static electricity, and even help each other clean a few rooms together. It isn’t after their developing friendship when Eve begins to flirt with a bashful window-washer she’s felt curious about for a few weeks. It was an intimate moment. A moment of nudity that didn’t feel gratuitous or over-the-top, or even out of character, despite Eve’s composed nature. Eve starts to see herself thrive in a new skin, so why not show who she is? Risk a little.

The film builds up to Eve receiving an update on whether or not she got the promotion. But was it the outcome she was hoping for? Was the sacrifice worth it? And if not, where does she go from there? The way she reacts to the news is something to behold and very cathartic, both for the character and the audience.

The depiction of Eve as a hotel worker is extremely important because it shows a well-rounded character juggling her responsibilities at work. In spite of unappreciative guests who seem to think she’s invisible and supervisors who can’t humanize her and her duties as a single mother and single breadwinner who wants to advance and offer her son love and time, you see that she’s not just a supporting character advancing the plotline of a white hero or heroine. She’s her own complex person.

What’s also important to note is that Avilés decides to have a modern woman who isn’t afraid or ashamed to explore her sexuality. She initiates all activity and consents to it. She owns her sexuality.

Unsentimental, devoid of cheap melodrama, and going far beyond the stereotypical depictions of domestic workers, The Chambermaid is proof that when you reject to ascribe trite tropes to a fully complex character, you allow cinema to flourish.