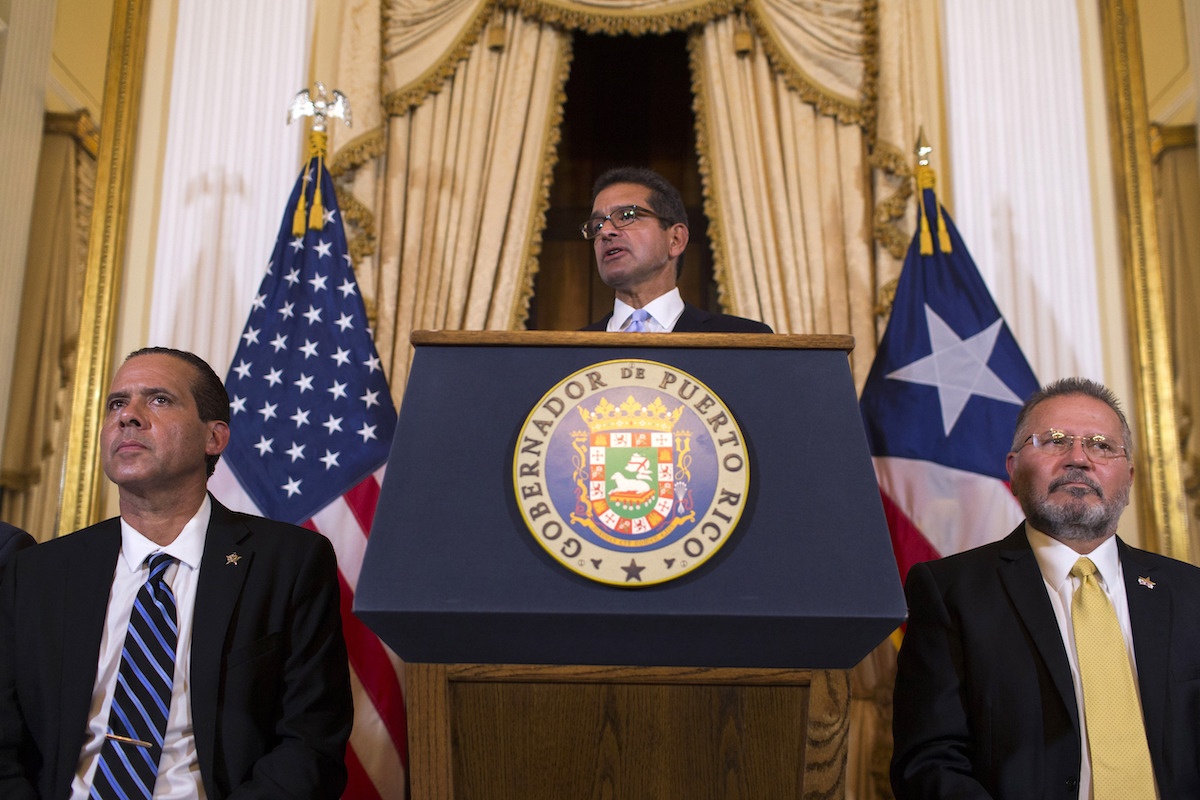 SAN JUAN, Puerto Rico (AP) — Puerto Rico Gov. Ricardo Rosselló resigned Friday as promised, clearing the way for veteran politician Pedro Pierluisi to be sworn in as his replacement, a move that threw the U.S. territory into a period of political uncertainty.

Rosselló had promised to step down in response to weeks of popular protest over mismanagement and a series of leaked chats in which he and advisers denigrated a range of Puerto Ricans. Because of problems with the qualifications of members of Rosselló’s administration in the constitutional line of succession, it was unclear until the last minute who would become governor.

Pierluisi was named secretary of state, the next in line to be governor, in a recess appointment this week. In an emailed announcement from his office, Rosselló said Pierluisi would succeed him. He was sworn in by a judge at 5 p.m., the hour Rosselló had set to leave office.

The territory’s House of Representatives confirmed Pierluisi as secretary of state Friday, but the Senate has not yet voted on his appointment. Rosselló said confirmation by both houses was unnecessary for a recess appointment, an assertion that appeared certain to generate legal challenges.

QUICK Translation of @ricardorossello press release, informing that @pedropierluisi will be sworn in soon. pic.twitter.com/sGyWwRWLDr

Two hours after taking the oath, Pierluisi emerged at the governor’s residence to address the press and said he would only promise to serve as governor until Wednesday, when the Senate has called a hearing on his nomination. If the Senate votes no, Pierluisi said, he will step down and hand the governorship to the justice secretary, the next in line under the constitution.

Nothing more was heard from Rosselló.

Pierluisi said he was “fully capable and authorized to act, but the Senate will have its say.”

Depending on the Senate’s action, his tenure “could be very short-lived,” he said. He did not plan to move into the governor’s mansion until after the vote. He also he would avoid any major changes and concentrate on meeting with top government officials.

The down-to-the-wire maneuvering risked political chaos and sowed bitterness and pessimism among Puerto Ricans about the fate of their island, which has been battered by years by bankruptcy and Hurricane Maria in 2017, one of the worst natural disasters in U.S. history.

Only days ago, there was jubilation over the success of the popular movement to force Rosselló out of office. On Friday, Puerto Ricans bemoaned the confusion that left them not knowing who would be their next governor.

“People are disgusted with the government in general, not just Ricardo Rosselló, everyone,” said Janeline Avila, 24, who recently received her degree in biotechnology.

Senate President Thomas Rivera Schatz, a member of Rosselló’s party seen as a possible future governor, criticized Rosselló for naming Pierluisi and appeared to hint at fighting the succession plan.

“He never regretted anything,” Schatz said of Rosselló. “He did not respect the demands of the people. In fact, he mocked them, using new accomplices.”

Schatz said that order and morals will prevail: “No one should lose faith.”

Hundreds of protesters marched to the governor’s residence, the Fortaleza, banging pots and drums and singing the national anthem. Protesters had not been highly critical of Pierluisi before Friday but expressed disgust with the succession process and Pierluisi’s ties to the federal control board that has promoted cutbacks on the island.

“It’s obvious that the constitutional setup that we have isn’t working for the people,” he said. “None of the options is one the people chose or want or deserve.”

Rosa Cifrian, a 47-year-old professor of nursing, said Pierluisi would not be a good governor “for the people.”

“He’ll keep promoting policies of austerity, cutbacks, everything that the board says,” she said.

Several hundred protesters remained outside the governor’s mansion after Pedro Pierluisi was sworn in: “Arriba! Abajo! Corruptos p’al carajo!”
The protest was calm, but police warned several times that they would throw tear gas if necessary. pic.twitter.com/PnOKXhsr91

The legislature, which is controlled by Pierluisi’s New Progressive Party, erupted into cheers when the House voted 26-21, with one abstention, to confirm Pierluisi as secretary of state.

One constitutional amendment states that everyone in line to become governor has to be confirmed by both House and Senate, except for the secretary of state.

Constitutional law professor Carlos Ramos and other legal experts questioned the validity of that amendment and believed Pierluisi must be confirmed by the House and Senate because the amendment contradicts the intent of the constitution and its statement of motives.

Lawmakers and Pierluisi himself expressed concern that the continuing political uncertainty would damage Puerto Rico’s efforts to get federal funds to recover from the hurricane and confront the economic crisis.

Several legislators have accused Pierluisi of a conflict of interest because he worked for a law firm that represents a federal control board overseeing the island’s finances, a body that has repeatedly clashed with local officials over demands for austerity measures.

Pierluisi, whose brother-in-law is the board’s chairman, tried to dispel those concerns in his opening remarks.

The board was created by Congress to oversee the restructuring of more than $70 billion in public debt after Puerto Rico declared a form of bankruptcy.

Pierluisi told lawmakers he is against several austerity measures demanded by the board, including laying off public employees and eliminating a Christmas bonus.

He said he supports public-private partnerships and the privatization of the island’s public power company.

“The people want a change, and I don’t blame them,” he said.

A key obstacle for Pierluisi has been Rivera Schatz, who wants to run for governor himself next year. Several legislators have said they prefer Rivera Schatz over Pierluisi, but the Senate leader is a powerful figure deeply associated with Puerto Rico’s political and business elite, and his elevation to the governorship could re-ignite popular outrage.

Pierluisi was Puerto Rico’s non-voting representative in Congress from 2009 to 2017 and then ran against Rosselló in the 2016 primaries and lost. He also served as justice secretary under Rosselló’s father, Pedro Rosselló, when he was governor.

Rosselló joined more than a dozen government officials who have resigned in the wake of an obscenity-laced chat in which they made fun of women, gay people and hurricane victims.

UPDATE, 9:30pmET: San Juan Mayor Carmen Yulín Cruz tweeted that San Juan will be filing a court challenge Monday morning at 8am against the swearing in of Pierluisi as governor.

Here is @CarmenYulinCruz tweeting that San Juan will file a court challenge Monday at 8am against the swearing in of @PRPierluisi as governor of #PuertoRico. https://t.co/jibiGlkyqN

One response to “Puerto Rico Governor Resigns as Promised, Successor Sworn In”