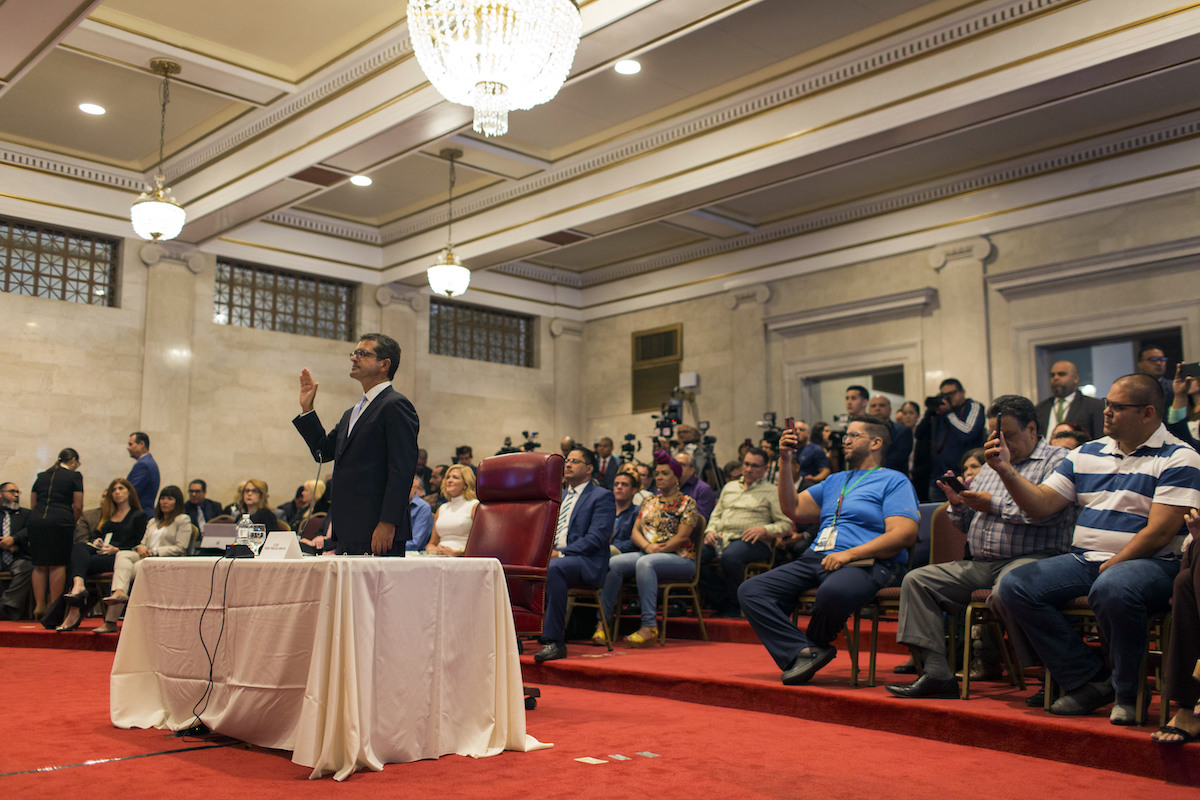 SAN JUAN, Puerto Rico (AP) — With just hours left before Puerto Rico’s governor was expected to step down, his designated successor tried Friday to convince legislators to confirm him in a down-to-the-wire attempt to avoid political chaos and avert a potential constitutional crisis.

But even if Pedro Pierluisi manages to win confirmation in the island’s House of Representatives, legislators debating the constitution disagreed over the line of succession and whether he could actually take Gov. Ricardo Rosselló’s place as the U.S. territory’s chief executive.

The confusion sowed bitterness and pessimism among Puerto Ricans about the fate of their nation, which has been battered by years of bankruptcy and Hurricane Maria in 2017, one of the worst natural disasters in U.S. history. Only days ago, there was jubilation over the success of the popular movement to force Rosselló out of office.

“People are disgusted with the government in general, not just Ricardo Rosselló, everyone,” said Janeline Avila, 24, who recently received her degree in biotechnology.

Pierluisi, 60, a former Puerto Rico congressional representative in Washington, faced more than two dozen legislators in the first of two public hearings that debated his selection as secretary of state, who could assume the governorship if the post is vacant.

If Pierluisi is rejected, Justice Secretary Wanda Vázquez automatically becomes governor as the next in the order of succession. She has said she would accept the job, but unwillingly.

Some lawmakers said a House vote for Pierluisi would count as confirmation and allow him to assume the governorship. Opponents said he must achieve Senate approval too, and they would sue to stop him becoming governor without that.

When asked, even Pierluisi said he did not know if confirmation as secretary of state would make him governor at 5 p.m.

“That decision hasn’t been taken,” he said. “It’s a legal matter. It’s under evaluation.”

Lawmakers and Pierluisi himself expressed concern that the continuing political uncertainty would damage Puerto Rico’s efforts to get federal funds to recover from the hurricane and confront the economic crisis.

Several legislators have accused Pierluisi of a conflict of interest because he worked for a law firm that represents a federal control board overseeing the island’s finances, a body that has repeatedly clashed with local officials over demands for austerity measures.

Pierluisi, whose brother-in-law is the board’s chairman, tried to dispel those concerns in his opening remarks.

The board was created by Congress to oversee the restructuring of more than $70 billion in public debt after Puerto Rico declared a form of bankruptcy.

Pierluisi told lawmakers he is against several austerity measures demanded by the board, including laying off public employees and eliminating a Christmas bonus.

He said he supports public-private partnerships and the privatization of the island’s public power company.

“The people want a change, and I don’t blame them,” he said.

A key obstacle for Pierluisi has been Senate President Thomas Rivera Schatz, who has said he would not vote for Rosselló’s nominee and wants to run for governor himself next year. Several legislators have said they prefer Rivera Schatz over Pierluisi, but the Senate leader is a powerful figure deeply associated with Puerto Rico’s political and business elite, and his elevation to the governorship could re-ignite popular outrage.

Rivera Schatz has scheduled a Senate hearing on Pierluisi for Monday.

Pierluisi was Puerto Rico’s non-voting representative in Congress from 2009 to 2017 and then ran against Rosselló in the 2016 primaries and lost. He also served as justice secretary under Rosselló’s father, Pedro Rosselló, when he was governor.

The political infighting and paralysis followed a wave of street protests against Rosselló, who joins more than a dozen government officials who have resigned in the wake of an obscenity-laced chat in which they made fun of women, gay people and hurricane victims.

Vega Ramos of the opposition Popular Democratic Party questioned during Friday’s hearing whether legislators were supposed to be approving a secretary of state or a governor.
“What are we doing this morning?” he demanded. “Clarify this for us and for our people.”