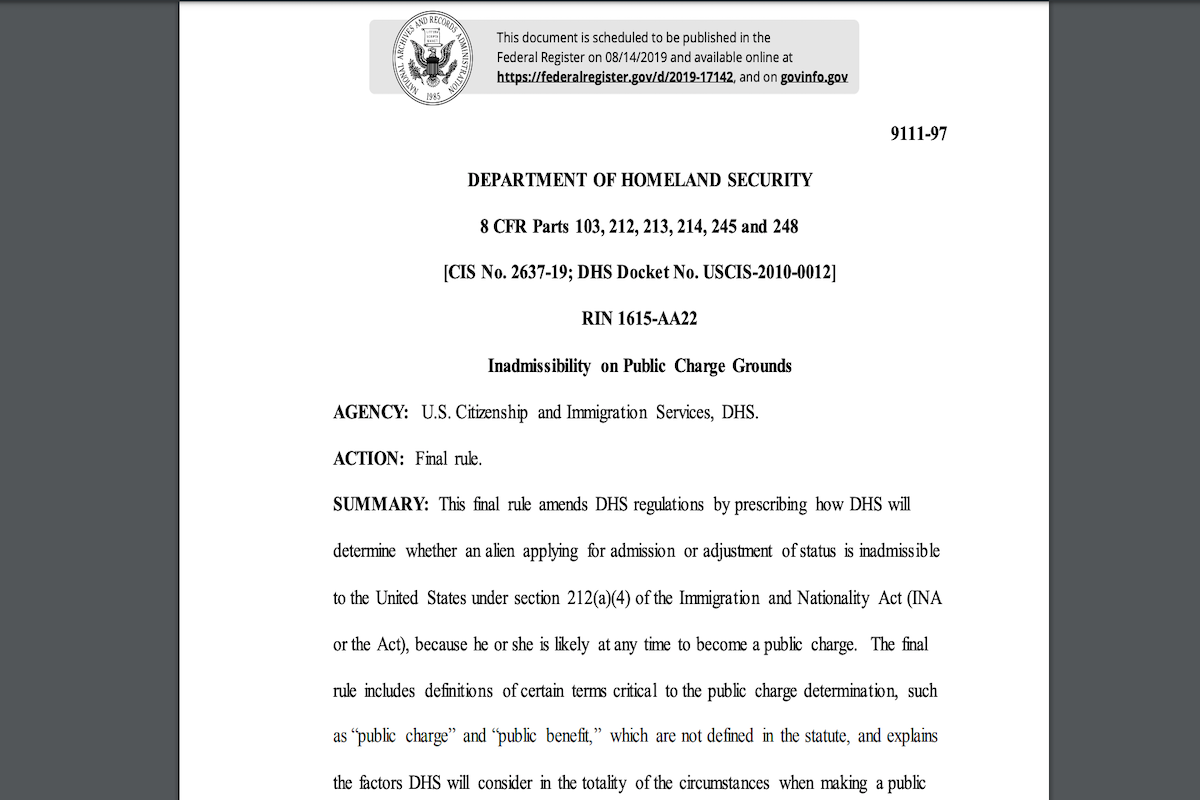 The following media release was shared on Monday morning by the National Immigration Law Center (NILC):

WASHINGTON — The Trump administration today posted the text, as a “public inspection document,” of a new regulation that would vastly expand the number of immigrants who may be deemed ineligible for lawful permanent residence based on their use of certain government services, household income, and other criteria. The rule, by the U.S. Department of Homeland Security (DHS), expands on a century-old practice of penalizing immigrant families who sometimes struggle to make ends meet. It is a cornerstone of the administration’s attempts to redefine our legal immigration system in order to disenfranchise communities of color and favor the wealthy.

A draft of the “public charge” changes was first leaked to news outlets shortly after President Trump took office in 2017. An updated proposed rule was then published in the Federal Register in October 2018, prompting more than a quarter million public comments—overwhelmingly in opposition.

The National Immigration Law Center announced today that it will file a lawsuit challenging the new rule, which is slated to go into effect on October 15.

“This news is a cruel new step toward weaponizing programs that are intended to help people by making them, instead, a means of separating families and sending immigrants and communities of color one message: you are not welcome here. This latest racially-motivated policy is a painful reminder that behind Donald Trump’s bluster, bureaucrats like Stephen Miller will stop at nothing to attack immigrants and destroy our legal immigration system.  It will have a dire humanitarian impact, forcing some families to forego critical life-saving health care and nutrition. The damage will be felt for decades to come.

“At the National Immigration Law Center, we have been fighting alongside our partners and communities for months to stop the Trump administration from carrying out this cruel and unlawful transformation of our immigration system. The time has come to take our fight to the courts, and we will do so shortly.

“Americans from all walks of life, including pediatricians, health care providers, educators, attorneys, and state and local elected leaders, have spoken out loud and clear: we must reject Trump’s attempts to skirt the law in order to radically reform our legal immigration system and undermine our democracy by blocking potential future voters from becoming permanent residents and citizens.

“As a leading national organization fighting to advance and defend the rights and opportunities of low-income immigrants, we will fight with every tool we have available to ensure that everyone in our communities has the freedom to thrive and the necessary resources to do so. We look forward to seeing Trump in court —again— and to seeing justice prevail as we defend immigrant families and our democracy.”