In Mexico, Hundreds of Women Take to the Streets to Protest Police Sexual Assault 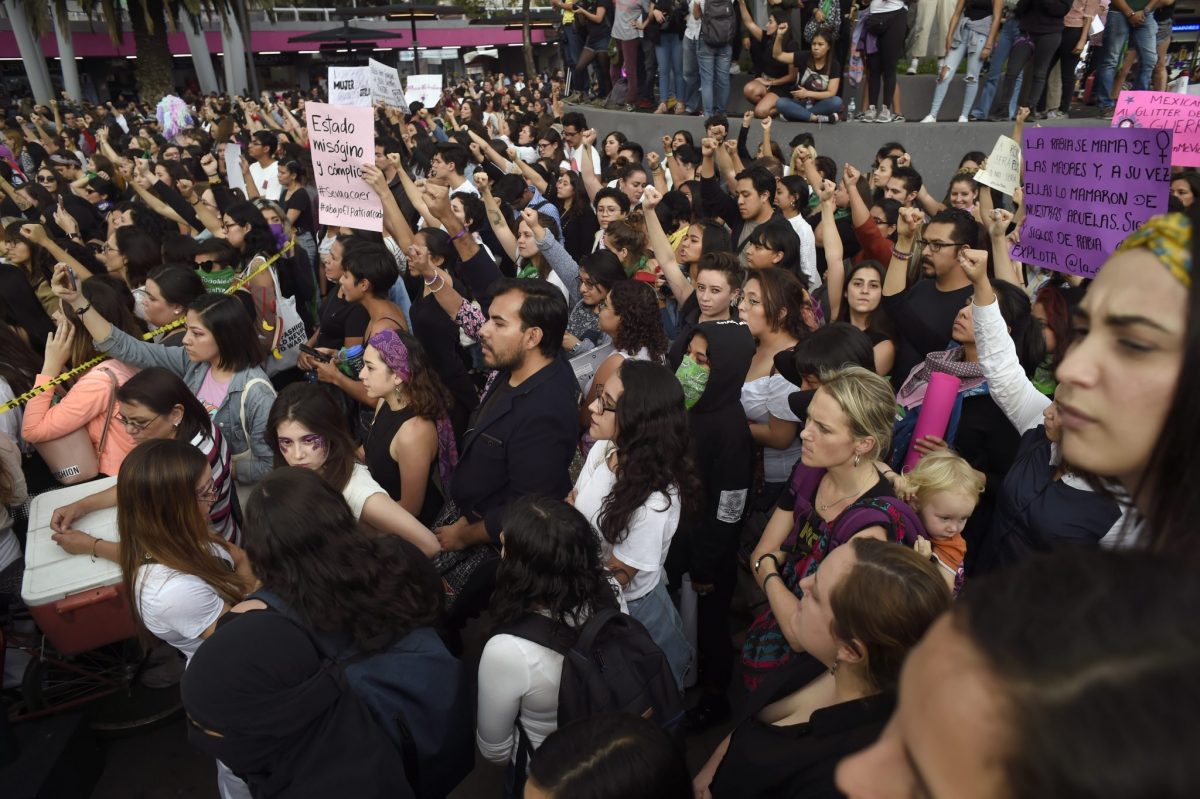 People demonstrate under the slogan “#NoMeCuidanMeViolan” (“#TheyDon’tProtectMe,TheyRapeMe”) in front of the Ministry of Public Security in Mexico City on August 16, 2019. (Photo by Alfredo Estrella/AFP/Getty Images)

Using the message #NoMeCuidanMeViolan (“They don’t protect me, they rape me”), hundreds of women took to the streets of Mexico City on Friday to protest police sexual assault cases. The protests come after two separate cases that have shaken the nation where policemen have been accused of raping teenage girls.

“We’re tired of everything. We need to rise up so that everyone knows what is happening,” one protester whose name was not revealed, told Ruptly, “Being a woman in Mexico is walking in fear. It’s being afraid of going outside and having something happen to you. It’s leaving your house and not knowing if you’ll return.”

During the protests, women spray-painted messages on public buses and walls and lit trash on fire, while holding signs that said, “They’re killing us, and you’re not doing anything,” “I do believe you!” and others. The women also allegedly defaced Mexico City’s iconic Angel of Independence monument.

As of July, Mexico City has seen 81 murders of women, and 13 specifically gender-based murders against women, according to government data. The United Nations reported that two-thirds of women 15 and older have experienced some form of violence.

While the protests reached new strength on Friday, they’ve been taking place for at least a week in direct response to the rape allegations. The first rape case was the evening of August 3, when several policemen allegedly raped a 17-year-old girl when she was heading home. The second case was of a 16-year-old girl who says she was raped in the museum where she works as an intern.

So far, six officers have been suspended as part of these allegations, though only one —tied to the museum case— has been arrested.

During one of the protests on Monday August 12, women threw red gas and glitter at the Secretary of the Public Security Jesús Orta Martínez. They also kicked down the glass doors of the attorney general’s office. 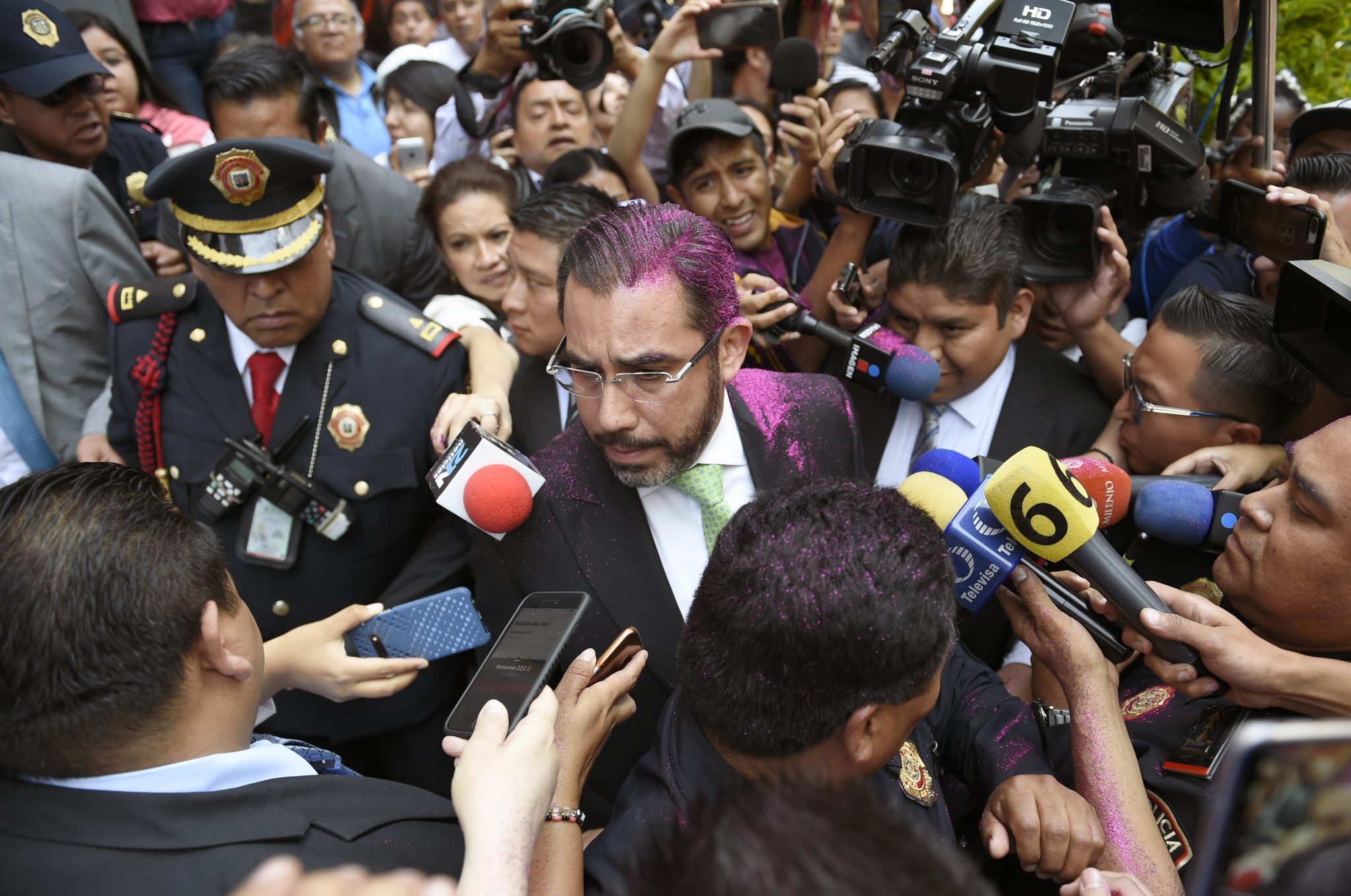 The Secretary of the Public Security of Mexico City Jesús Orta Martínez, with his hair sprayed by a demonstrator, is hounded by the press during a protest called by civil organizations against the police on August 12. (Photo by Alfredo Estrella/AFP/Getty Images)

“The government will not respond with violence but with justice, and I want to emphasize that what happened today was an act of provocation,” Mexico City’s mayor Claudia Sheinbaum said last week.

She also posted a message on Twitter saying that there won’t be impunity when it comes to the cops accused of these rapes.

Her comment that the act by the protesters was a “provocation” caused controversy and negative feedback on social media. One woman said on Twitter, “Two women are raped by cops, one a few blocks from her house, the other in a museum, authorities say they might allow them to stay free and return to work, but in the end of the day, it’s us who are violent.”

After the Friday protests, the mayor posted a message on social media in response, saying, “About today’s manifestations, we respect the majority of what they did peacefully, for them the doors of the City of Mexico will always be open for frank dialogue, but we can’t justify the violence of some of them.”

Sheinbaum, the first woman to be elected to the position, promised in July to tackle the issue of women’s violence. “It’s not fighting it—the objective is ultimately to eradicate violence,” she said.

On Sunday August 18, several activists met with Sheinbaum to discuss their concerns, though details have yet to be shared. Though one of the attendees, activist Ytzel Maya, said that there won’t be investigations into the protesters of neither actions last week. She also said the mayor apologized for criminalizing the protests.

The protests are taking place just months after Mexico’s #MeToo movement (using several hashtags such as #metooescritoresmexicanos and #YaEsHora) was sparked, when women in journalism, academia, film, politics, law, and Hollywood spoke out against sexual abuse.