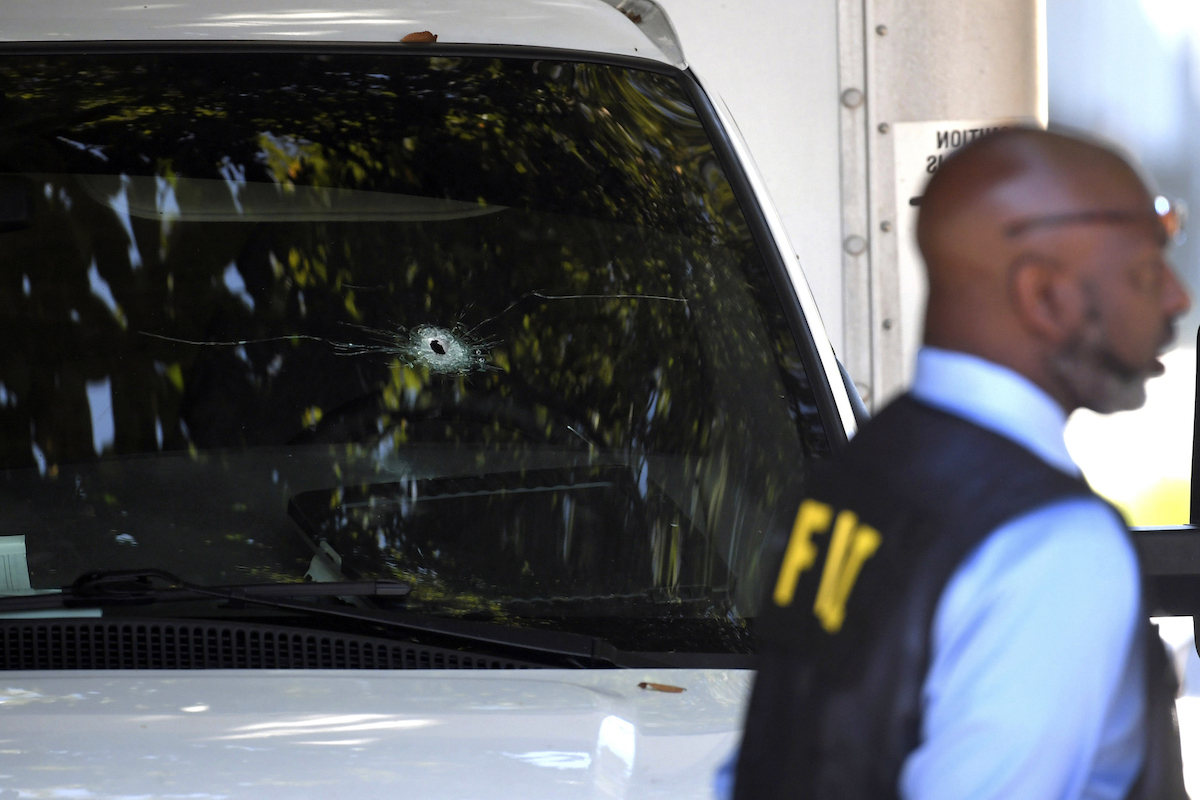 A bullet hole can be seen in the front window of a box truck where law enforcement officers investigate after shots were fired involving Immigration and Customs Enforcement agents in the parking lot of a Food Lion store, Thursday, Sept. 5, 2019, in the Antioch neighborhood of Nashville, Tenn. (Shelley Mays/The Tennessean via AP)

Cox said the shooting came after agents pulled over an individual who had been under surveillance. Cox did not identify the person by name but said he was a 39-year-old Mexican national who has been deported multiple times from the U.S.

After agents identified themselves as working for ICE, the person attempted to flee, driving toward an agent who had been standing in front of the vehicle, Cox said.

“The officer pulled a weapon and fired two shots into the vehicle,” Cox said. “I don’t know if the officer was injured.”

Nashville Mayor David Briley released a statement saying police were looking for the man so that he could receive medical assistance.

“My top priority remains the safety and well-being of all of the residents of Nashville,” he said.

Briley has emphasized that Nashville police are not involved in immigration enforcement. In July, they were called to the scene when ICE agents tried to arrest a man in his driveway and he and his son refused to leave their vehicle, prompting a standoff.

Nashville police said they were instructed not to get involved but to keep the peace if necessary. The standoff lasted for four hours with neighbors pitching in to help the father and son by bringing them food and water. Eventually the immigration agents left.

Then last week, Briley called for an investigation of reports that Nashville probation officers were working with federal immigration agents by passing along information such as addresses and phone numbers. Briley called the actions “absolutely unacceptable.”

On Thursday, Nashville police secured the scene while waiting for federal agents to arrive. Cox said the ICE Office of Professional Responsibility will inquire into the weapons discharge, but the main investigation will be conducted by the Federal Bureau of Investigation.

FBI spokesman Joel Siskovic said his agency was asked to investigate a potential assault on a federal officer.