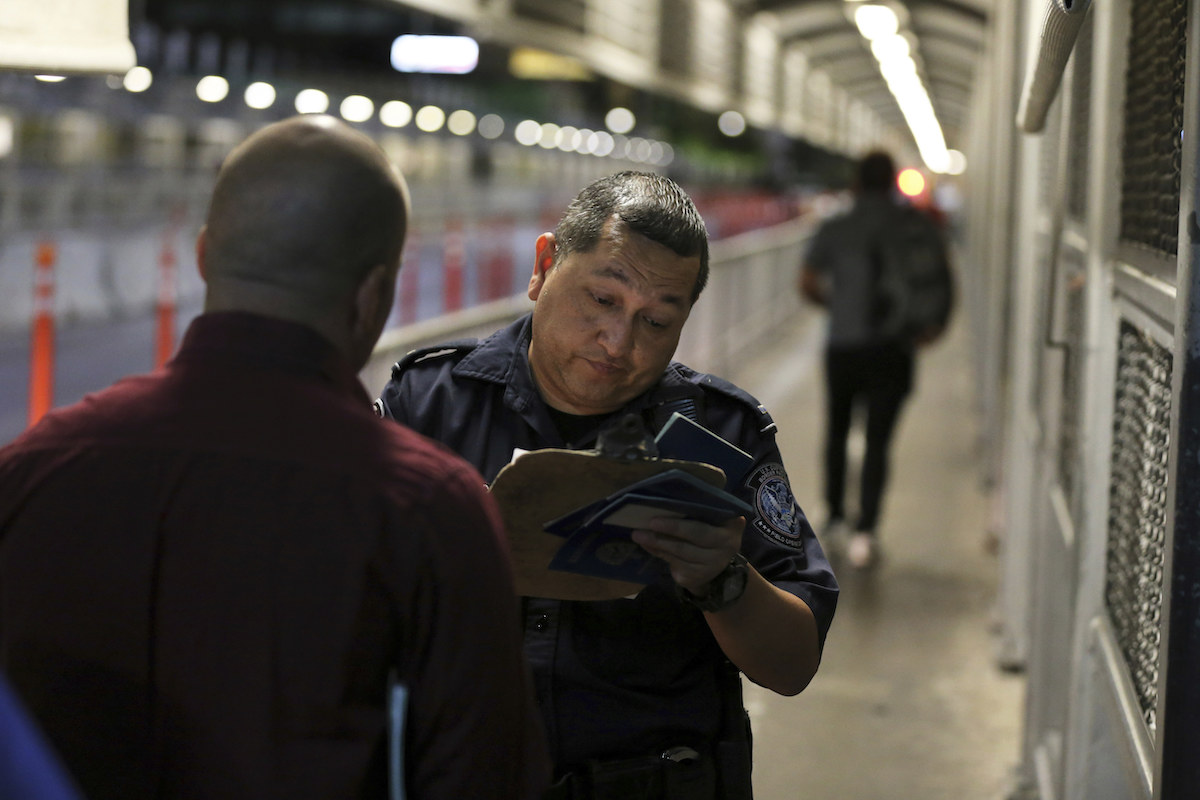 A U.S. Customs and Border Protection officer checks the documents of migrants who are on their way to apply for asylum in the United States, on International Bridge 1 as they depart Nuevo Laredo, Mexico, early Tuesday, Sept. 17, 2019. (AP Photo/Fernando Llano)

NUEVO LAREDO, Mexico (AP) — Abel Oset was seized with panic. After an 11-country odyssey that began when he and his namesake son fled Cuba, and a brief moment on U.S. soil, he was crossing back into America.

But he wasn’t sure he’d be able to stay.

The two were to plead their case in a court set up inside a tent in Laredo, beamed via video conference to a judge in another city, the latest attempt to clear a massive backlog of asylum cases.

They were among more than 100 migrants on Tuesday’s docket—though only 38 had arrived. So much depended on this hearing; Oset dreaded the very real possibility that he and his 22-year-old son would be sent back over the international bridge, back to Nuevo Laredo and its cartels and violence.

Some migrants, awaiting hearings, arrived at the bridge before sunset Monday from Monterrey, hundreds of miles from the border. Others left the city hostels early to avoid moving at night.

Acting Homeland Security Secretary Kevin McAleenan headed to the area to tour the new facility on Tuesday, a day after it opened.

The Department of Homeland Security has said it planned to spend $155 million to build and operate the tent courts but expects the costs to be less than that. But critics have denounced the proceedings because they are closed to the public and difficult for attorneys to access to provide legal representation.

For Trump, curbing immigration remains his signature issue and his administration is also dealing with a massive increase in migrants, mostly Central American families, that has strained the immigration system. A major aim of these programs is to deter people from coming to the Southern border. Mexico has cracked down on migrants coming to its Southern border, and the U.S. is working on diplomatic agreements with other Northern Triangle countries. 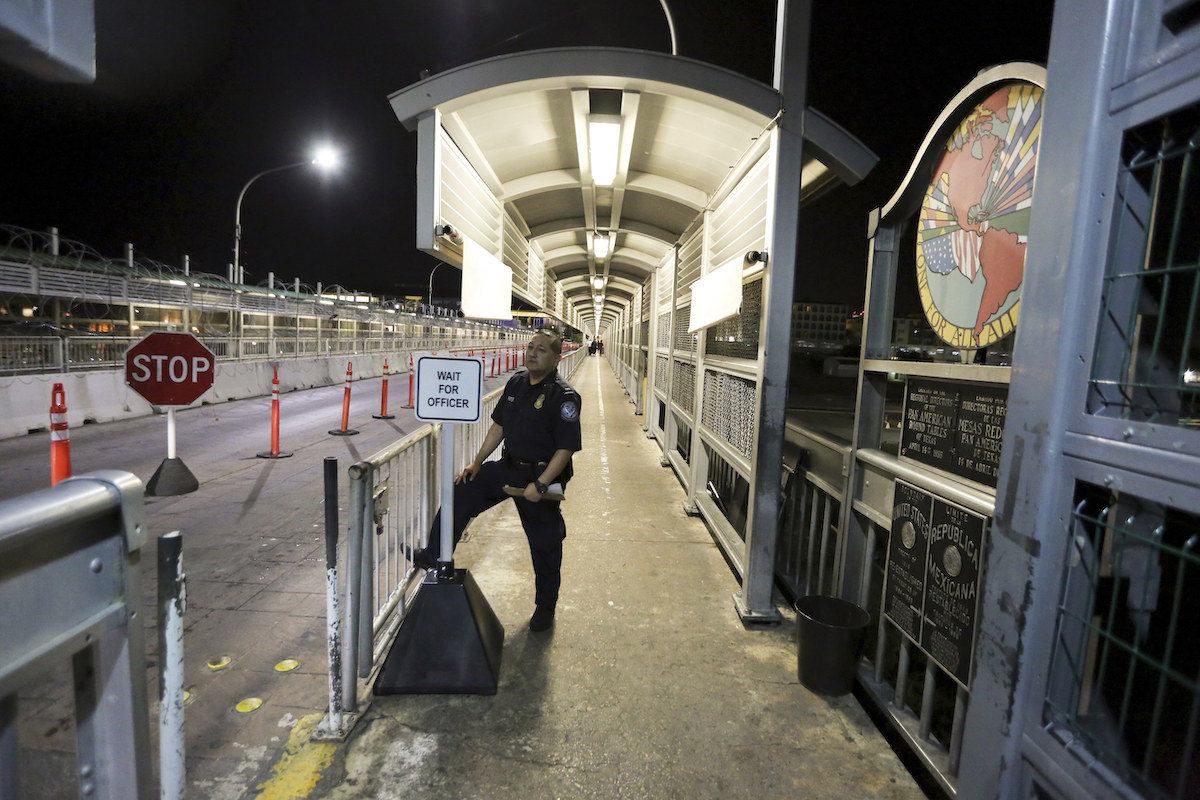 A U.S. Customs and Border Protection officer waits for migrants who are applying for asylum in the United States to arrive at International Bridge 1 where they will cross from Nuevo Laredo, Mexico, to Laredo, Texas, early Tuesday, Sept. 17, 2019. (AP Photo/Fernando Llano)

The U.S. Supreme Court this week made it vastly more difficult for people to win asylum, allowing the new rules into effect during litigation challenging them. The rules bar anyone who passed through another country from claiming asylum, though some other protections may still be available.

Oset hopes because he came before July 16, when the regulations came into effect, he’ll pass. But he must also convince the judge he is afraid not only to return to his home country, but to Mexico.

Oset and his son arrived at the U.S.-Mexico border in April. They fled Cuba when a neighbor reported him to state security for watching a documentary about the Castro family’s possessions and he was beaten, he said.

At the border, the two were returned to Mexico to wait out their claims.

Awaiting his hearing in the pre-dawn hours on Tuesday, Oset lay on the floor of a migration building in the dangerous state of Tamaulipas. . He spoke of the criminals who stalk the bridge, picking off migrants. He and his son were targeted by kidnappers twice but had no money and were turned loose with warnings not to return.

“Those who arrive are being taken, one by one,” he said.

At least 42,000 migrants have been forced back into Mexico this year after crossing the border, according to the U.S. government. Many of them say they fled violence or threats in their home countries with hopes of getting asylum.

Immigrants and advocates trying to help in Mexican border cities have reported families sleeping in overcrowded shelters, boarding houses or outdoor camps. Many have been bused south by Mexico to cities considered safer, though there was no guarantee that they would be able to return.

The U.S. government has warned Americans not to travel to Tamaulipas, citing safety concerns. Meanwhile, the U.S. Border Patrol’s Rio Grande Valley chief recently testified that the agency was sending more than 1,000 migrants a week to Tamaulipas under the program.

Margarita Arredondo, pastor of an evangelistic church, converted her home into a shelter and she helps them make their hearings.

“You have to give them protection because Mexico is not a safe country, that is very clear,” she said.

According to data from Mexican Foreign Minister Marcelo Ebrard, nearly half of those who were sent to Mexico from the U.S. returned to their homes.

“They don’t want us anywhere, Mexicans reject us too,” said a 29-year-old Honduran woman who spoke only on condition of anonymity because she was afraid.

She says she has just learned about the murder of a friend in Intibucá, where she fled, leaving behind two children with her mother because the gangs threatened her.

She has no documents, common among migrants who flee their homes quickly out of fear.

Her eyes fill with tears when asked what she will do if she is returned again to Nuevo Laredo.

One response to “Migrants Anxious Before Court Dates in Texas Tents”