Nurses Speak Out About Border Conditions 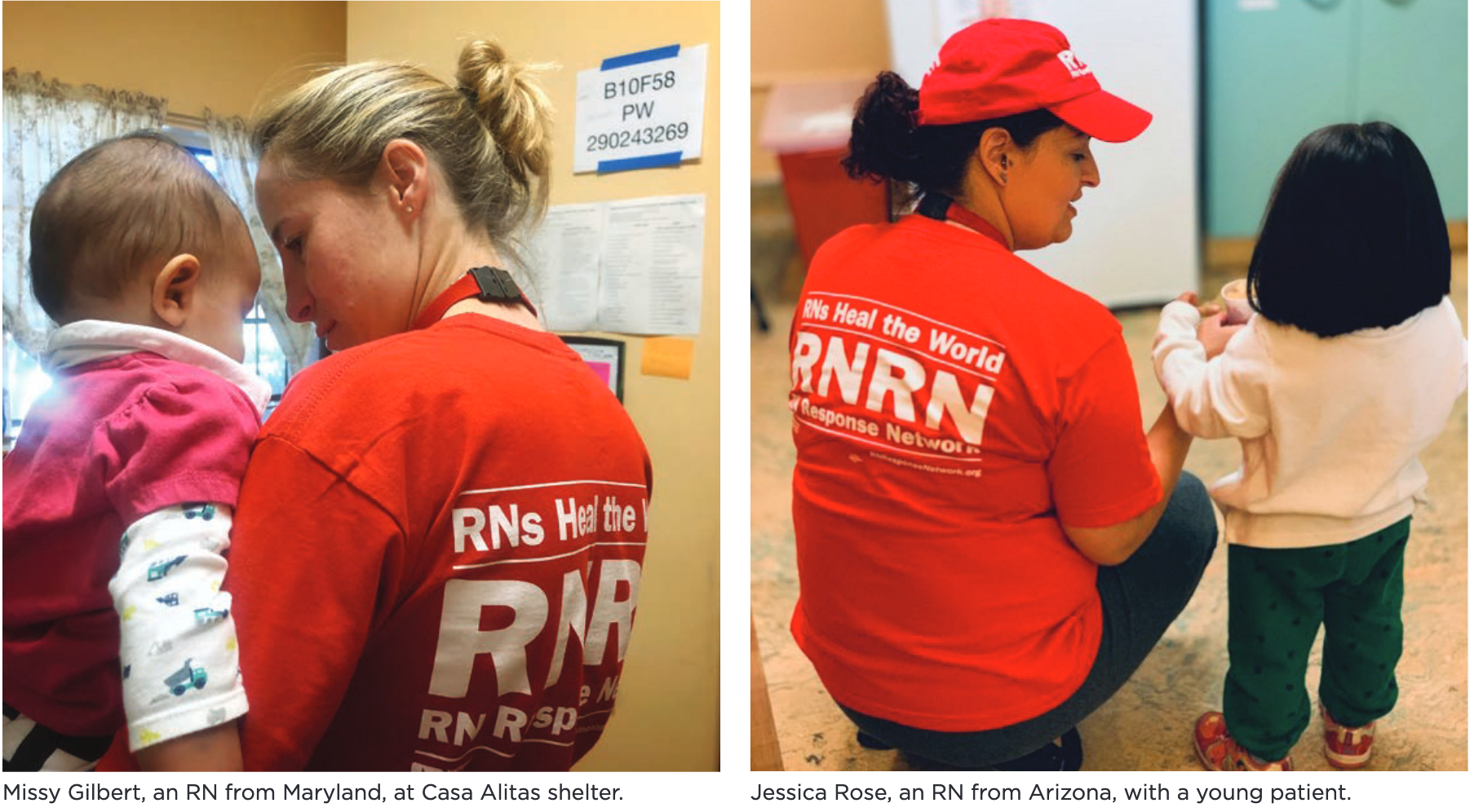 The Registered Nurse Response Network (RNRN) has released “Compassion Without Borders: RNs Report on the Public Health Crisis at the Border,” announced RNRN, National Nurses United (NNU), and California Nurses Foundation (CNF). The report outlines the health crisis at the border, which the government created.

The 20-page report provides nurses’ firsthand accounts and news reports on the conditions at the southwestern U.S. border and makes concrete recommendations calling for humanitarian standards in border detention facilities. The report details the abysmal conditions in ICE and Border Patrol detention centers where asylum seekers were not given sufficient amounts of food or drinking water during detention or provided basic hygiene. Some conditions were so inhumane, they don’t even meet the Geneva Conventions’ standards for treatment of prisoners of war.

RNRN volunteers spoke out about their deployments to shelters in Tucson, Ariz., El Paso, Texas, and other locations at the Global Nurses Solidarity Assembly in San Francisco on Sat., Sept. 14. The nurses cared for asylum seekers who had been in ICE or Border Patrol detention as well as other people in need of disaster relief and humanitarian assistance, including victims of Volcan de Fuego in Guatemala and Hurricanes Katrina, Harvey, and Maria.

“It was appalling to hear about the conditions of families kept by ICE and U.S. Border Patrol,” said Cathy Kennedy, an RN from California, during the “Compassion Without Borders” panel. “They were not to be able to brush their teeth, have clean combs, or shower.”

“[In detention, ICE] would take all their clothes except for one layer,” said Maria Rojas, an RN from Florida. “They also took their shoelaces, belts, and hair ties. They slept on the floor in what they called ‘hieleras,’ ice boxes with only a mylar sheet for a blanket. The little ones had bad colds. One little boy was so congested, he had trouble breathing.”

“During my deployment in Tucson, I had to take a young girl to the emergency room twice,” said Kennedy. “We thought she had Kawasaki disease because she was so sick. Her father was so worried. He had left his wife and another child behind in Guatemala to find a better life.”

“There is a stark contrast between people vilified in the media versus the people I saw at Casa Alitas [shelter in Tucson],” said Terry Tate, an RN from Louisiana. “Nurses met many families who traveled for 15 days, sometimes more, to reach the United States. They took treacherous journeys to escape violence and extreme poverty.”

“We treat everyone regardless of immigration status,” said Kennedy. “We absolutely have to do more. We cannot stand for one more death.”

RNRN —a disaster relief program sponsored by NNU and CNF— deployed 20 teams of volunteer registered nurses, more than 50 RNs from 16 states around the country to provide basic medical care at border shelters to asylum seekers from January to July 2019. RNRN currently has nurses deployed in the Bahamas, assisting victims of Hurricane Dorian.

The Registered Nurse Response Network, a disaster relief program sponsored by National Nurses United and California Nurses Foundation, has a volunteer base of more than 26,000 RNs representing all U.S. states and territories as well as 21 countries around the world.

2 responses to “Nurses Speak Out About Border Conditions”