Amid Call to Rearm, Ex-FARC Combatants Hesitate to Give up on Peace 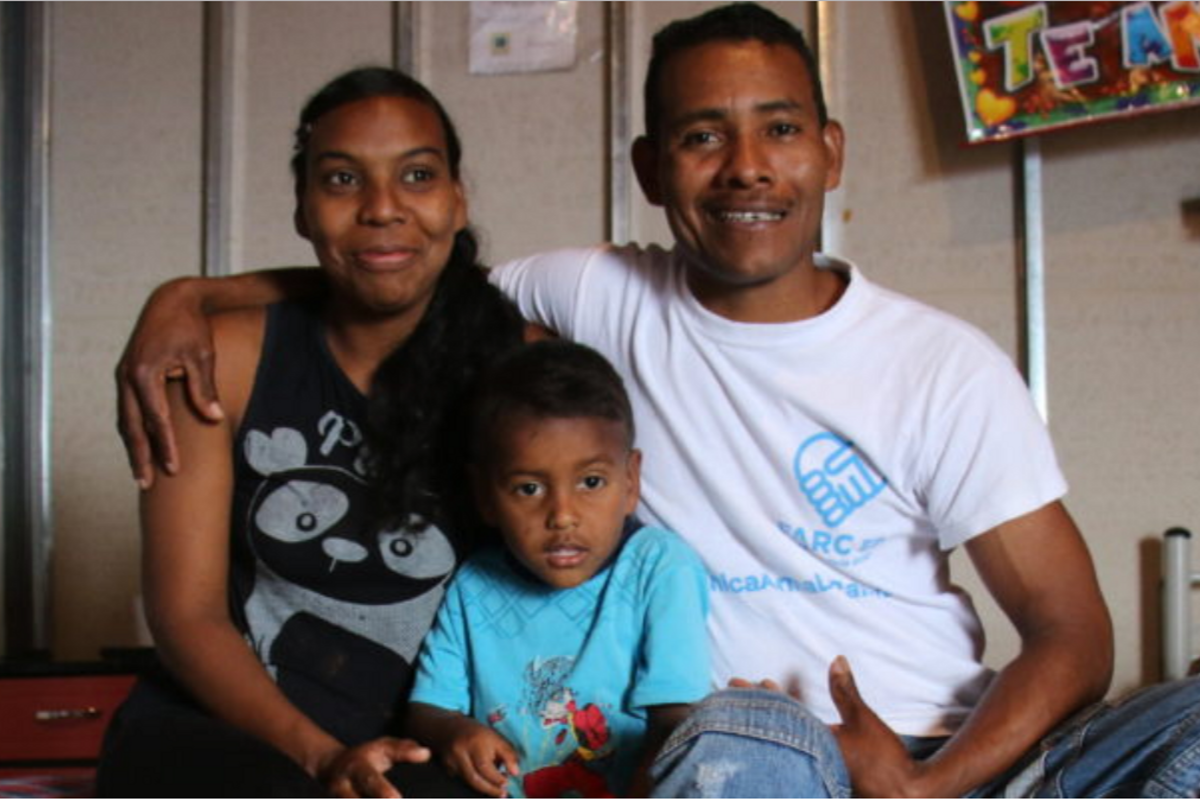 Gonzalo Beltrán and his partner Zuli, who is not an ex-combatant, met at the reintegration camp while she visited her sister. They live together with her 3-year-old son. Zuli is six months pregnant with Beltrán’s first son. (Photo by Christina Noriega)

ICONONZO, Colombia — Like millions of other Colombians, Gonzalo Beltrán woke up on August 27 to the news that a group of former commanders of the demobilized Revolutionary Armed Forces of Colombia, or FARC, was resuming their armed struggle against the state. Two years after disarming and moving into a rural camp in the central Tólima province where he transitioned to civilian life, Beltrán, a 43-year-old ex-combatant, found himself fielding questions about his commitment to the peace deal.

Many wondered whether the 11,000 former rebels would heed the senior leaders’ call to arms and return to combat. But in Antonio Nariño, one of the 24 reintegration camps spread across the country where Beltrán lives, life carried on as usual that Thursday morning. When journalists called to ask him what this decision meant for him and thousands of other ex-combatants, Beltrán said he would remain on the side of peace.

“We continue in the struggle, we continue to work,” he said he told reporters.

Approximately 1,800 ex-combatants had already rearmed since the government and the FARC signed a peace deal in 2016, but the news that former top commanders would launch a new guerrilla insurgency represented a significant blow to the peace process. Among the leaders who called for rearmament was Iván Márquez, FARC’s second-in-command and a key peace negotiator. The announcement leaves former FARC members in a tough spot. Should they rearm and risk escalating the conflict or stay the course with a failing peace deal? Beltrán, who helps manage a clothing-manufacturing project in Antonio Nariño, said most people in the camp are still committed to peace.

“I can only speak for the members of the cooperative, who are the people that I’ve spoken to, but I see everyone very motivated, very committed,” Beltrán said. “We haven’t said that because of the announcement our clothing-manufacturing project is over. On the contrary, we’re working to see how we can make our project a success.” 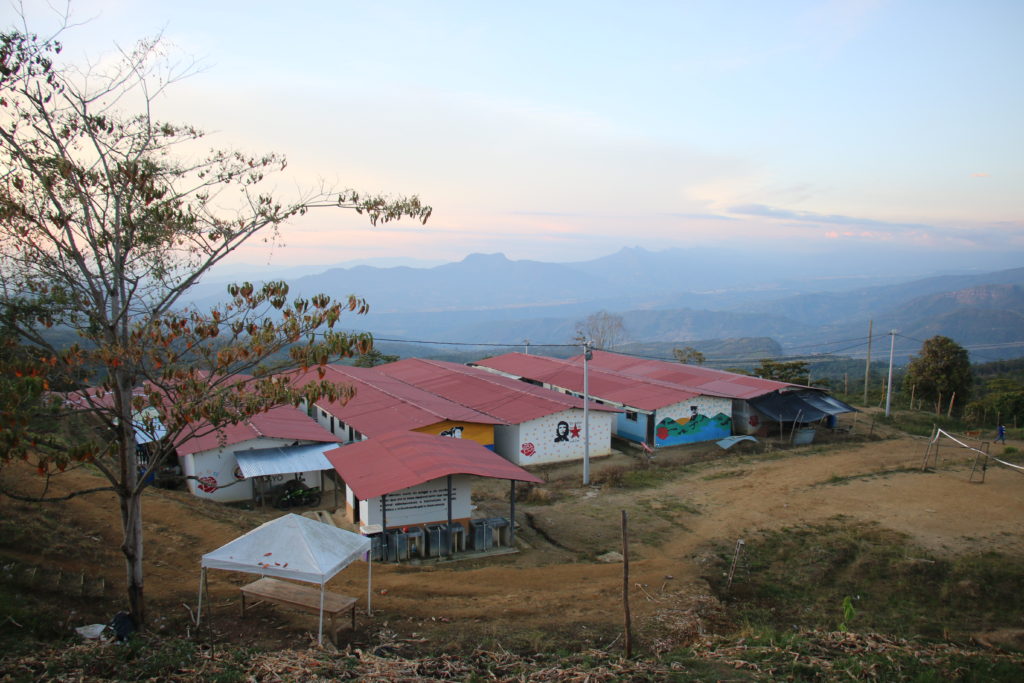 In the reintegration camp of Antonio Nariño, ex-combatants left the Eastern Bloc of the Revolutionary Armed Forces of Colombia to transition to civilian life with their families. Some 300 people currently live there. (Photo by Christina Noriega)

The former FARC commanders announced their call to arms in a 32-minute video. The men, dressed in camouflage and carrying rifles, blamed their decision on President Iván Duque’s failure to properly implement the peace deal and to prevent a wave of violence that has cost the lives of at least 137 ex-combatants and 738 social leaders. But the announcement was not met with immediate support. Rodrigo Londoño, head of the FARC political party, rejected his former comrades’ decision and reminded the country that this group represented only a tiny sliver of the 13,000 ex-combatants. The majority —about 90%, according to a government poll published earlier this year— remained committed to peace.

“We’re here and we will continue to be here, defending the peace accord and fighting peacefully, with an increasingly large sector of compatriots, for its comprehensive implementation,” Londoño told Semana magazine.

Ariel Ávila, deputy director of the Peace and Reconciliation Foundation, said that the rearmament didn’t mean the end of the peace deal nor signal that the rest of the demobilized guerrilla would abandon the peace process. That approximately 1,800 out of 13,000 ex-combatants rearmed is relatively normal for a peace process, but he warned that Márquez’s announcement could lure ex-combatants to join his group. The new group led by Márquez could expand by drawing manpower from 16 of the 23 dissident FARC groups that already exist and potentially sway other ex-combatants to abandon the peace process. This is more likely to happen in volatile areas where illegal armed groups have moved following the demobilization of the FARC, Avila said.

Threats of violence against ex-combatants could provoke some to flee for the jungles and rearm. But there are other factors that could make ex-combatants lose faith in the peace process and rearm. The government has been slow to implement important aspects of the reintegration process, including effective security measures for ex-combatants. Former rebels also need government support for economic projects and guarantees for legal security to successfully transition into civilian life.

“If ex-combatants are being killed, they’re in jail, they don’t have economic projects, an announcement like that of Iván Márquez causes people to think, ‘As a lawful citizen, I don’t have anything, so I prefer to rearm,’” Ávila said, adding that progress on this issue depends on how the government decides to move forward. 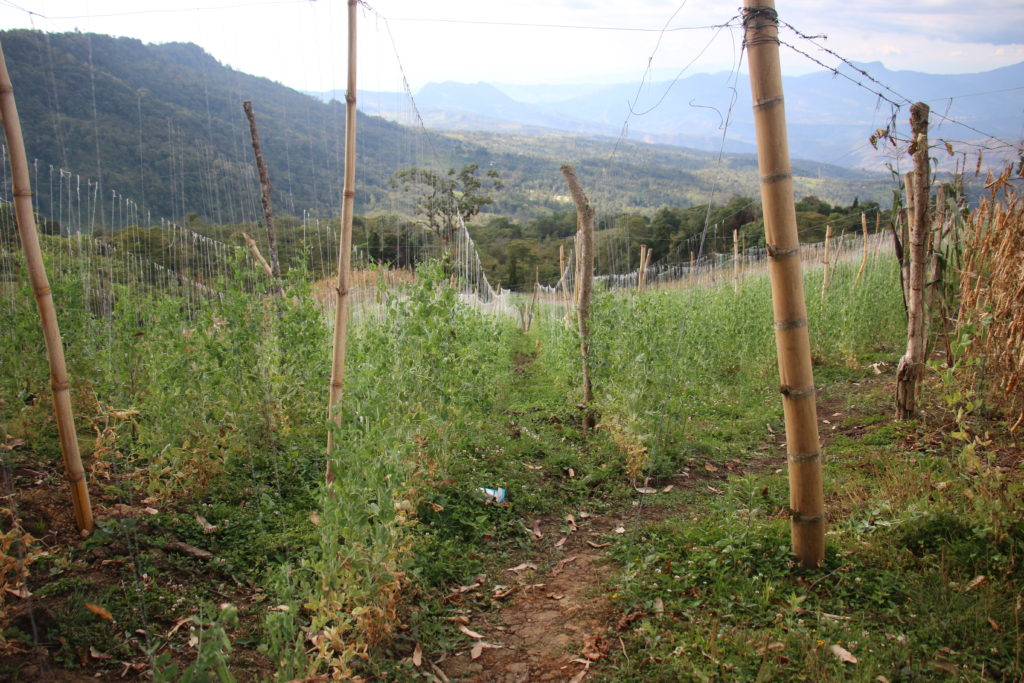 Ex-combatants rent lands next to the reintegration camp to grow crops, such as peas and beans. (Photo by Christina Noriega)

In response to Márquez’s announcement, Duque offered a 3-billion-peso reward (approximately $888,000) for information on any of the rebels who appeared in the video and ordered the creation of a special unit for their search and capture. He also affirmed his administration’s commitment to the reintegration of ex-combatants.

But Beltrán, who is struggling to keep afloat his clothing-manufacturing cooperative, insisted that the government is failing to fulfill its pledge to support their reintegration. Instead of designating billions of pesos to capture those who already left the peace process, he suggested that these public resources be spent to buy lands for ex-combatants and to help fund their business projects that would afford them economic stability.

At the reintegration camp, about 300 ex-combatants and their families strive to make a better life for themselves. Most families have recently decided to have children now that they’re not at war, including Beltrán, whose partner is six months pregnant with their first child. Ex-combatants have also founded a craft brewery, launched a clothing line, rented lands to farm crops and opened local businesses, such as a hotel and a restaurant. But public underfunding for ex-combatants has made it difficult for them to improve their living conditions. The government has financed around 30 economic projects that serve approximately 2,000 people. Other ex-combatants, such as those who live in Antonio Nariño, have had to pool resources from their monthly stipends to jumpstart their projects.

There are also issues with public utilities and infrastructure at Antonio Nariño. A gas generator powers the camp of 300, but it’s not enough to keep electricity running at all times. This presents a problem for those at the clothing cooperative who wish to use heavy machinery to expand their production. Meanwhile, water is scant, particularly as the dry season settles in, and the sewage system is in desperate need of repair.

Most importantly, even while living in this region of relative tranquility, some ex-combatants fear that the violence that haunts residents of other reintegration camps could rear its head in Antonio Nariño. Beltrán said that he’s often afraid of leaving the camp, located 40 minutes along a winding dirt road from the nearest town of Icononzo.

“It’s sad that if I went to town and an armed person forced me to get out of the car, as has happened in other camps, I wouldn’t be able to defend myself,” Beltrán said. “It’s worrying that the government hasn’t done enough to protect ex-combatants.” 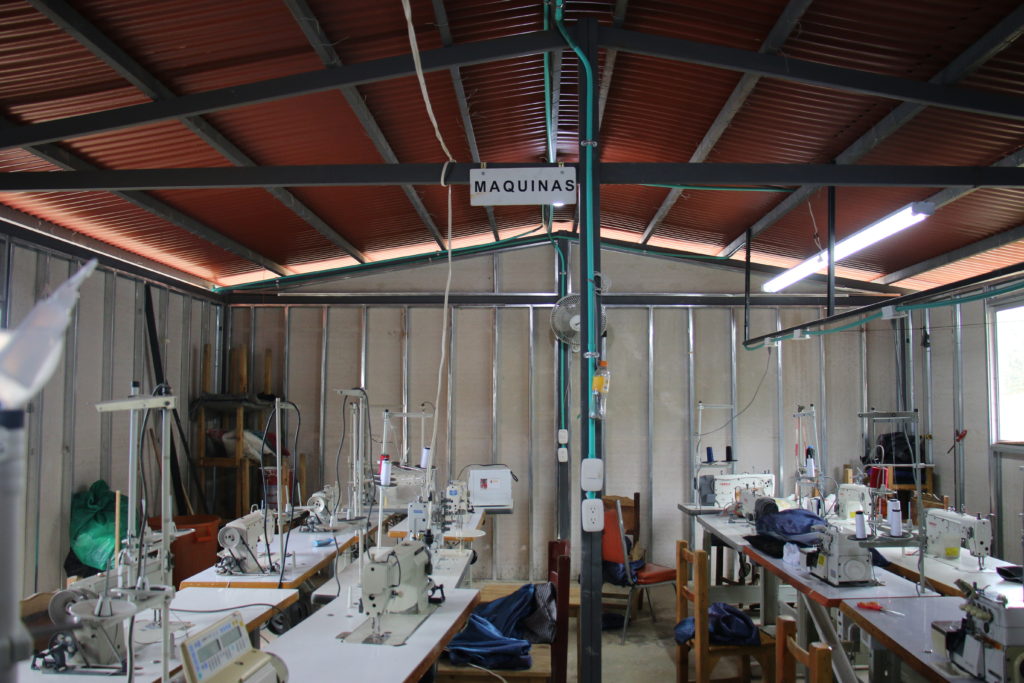 Ex-combatants pooled money from their monthly stipends to purchase equipment to start a clothing-manufacturing business at the reintegration camp. (Photo by Christina Noriega)

What the government can do to prevent more ex-combatants from leaving the peace process is to guarantee a successful reintegration process, Ávila said. For the analyst, this means financing and buying lands for economic projects that benefit another 9,000 ex-combatants, resolving the legal situation of some 200 ex-combatants who remain in jail, securing their political participation and implementing protection measures, especially in five key regions where the assassinations are concentrated.

It’s too early to tell whether the Duque administration will take the opportunity to double down on the implementation of the peace deal, but Carlos Alberto, an ex-combatant who lives in the Antonio Nariño camp, suggested that the rearmament could have the unexpected effect of pressuring the government to take action, given that it provoked a wave of public support for the peace deal.

“A lot of people have come out to support the peace deal, to say that we need to mobilize and that they acknowledge that the government hasn’t followed through with its promises to ex-combatants and that most of the accord has yet to be implemented,” Alberto said.

From his tin-roofed home where he lives with his partner and 4-year-old daughter, Alberto, who is a coordinator for the FARC political party, expressed his doubts that many ex-combatants will rearm. Instead, he believes the new guerrilla group will draw force from new recruits beleaguered by violence and inequality in remote regions, the same conditions that caused the FARC rebel group to arm in the first place. Those who know war and have started a new life have too much to lose, he said.

“A lot of people here have passed days without eating, months eating roots, drinking water from plants. They’ve sacrificed a lot more than you can imagine,” he said. “Today, they have a different life. It may not be the most luxurious nor the grand life that others hope for, but it’s peaceful. Many say they won’t leave this behind to go back to war.”

Christina Noriega is a freelance journalist from Irving, Texas, who reports on the peace process, women’s rights, the environment and culture in Colombia. Her work has appeared in Al Jazeera, OZY, Latino USA and other online publications. She tweets from @c_mnoriega.