Federal Board Files Plan to Reduce Puerto Rico Debt by 60% 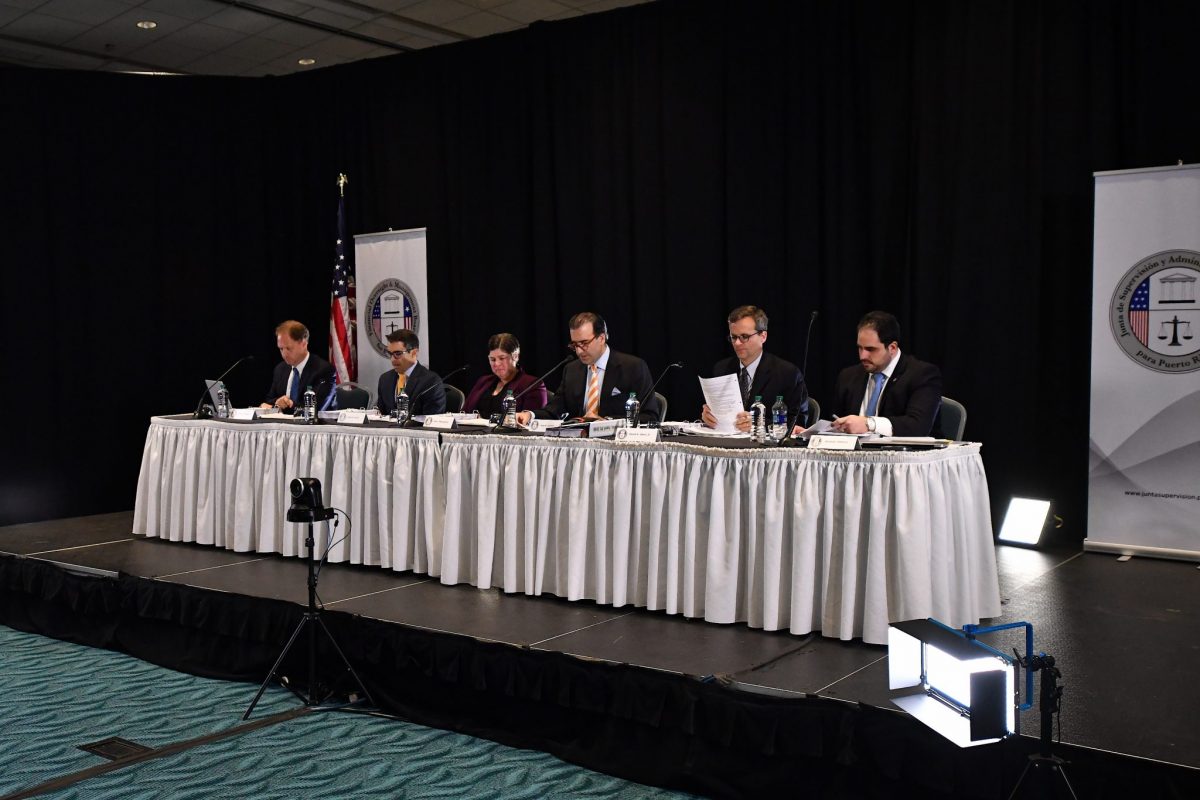 The Financial Oversight and Management Board for Puerto Rico in 2018.

SAN JUAN, Puerto Rico (AP) — A federal control board that oversees Puerto Rico’s finances filed a long-awaited plan on Friday that it says would reduce the U.S. territory’s debt by more than 60 percent and pull the island out of bankruptcy.

The plan comes three years after U.S. Congress created the board and would reduce a total of $35 billion in liabilities to $12 billion, a move that some believe would help ease Puerto Rico’s financial crisis amid a 13-year recession.

“Today we have taken a big step to put bankruptcy behind us,” said board chairman José Carrión. “Three years after Congress passed PROMESA and two years after the most severe hurricane in more than 100 years hit Puerto Rico, after more than a decade of economic decline and fiscal disarray, after tens of thousands of Puerto Ricans left their island to find prosperity elsewhere, we have now reached a turning point.”

Puerto Rico was dragging more than $70 billion in public debt after decades of mismanagement, corruption and excessive borrowing to balance budgets. In June 2015, the government declared the debt unpayable, and in May 2017, Puerto Rico filed for the biggest U.S. municipal bankruptcy in history.

Since then, several multimillion-dollar deals have been reached with creditors holding bonds issued by certain Puerto Rico government agencies. The newest plan targets general obligation bonds and other debt held by the government, and it still has to be approved by a federal judge overseeing a bankruptcy-like process as Puerto Rico still struggles to recover from Hurricane Maria. The island’s infrastructure remains weak as evidenced by Puerto Rico’s Electric Power Authority announcement late Thursday about selective power cuts given high demand and an overwhelmed power grid that has left tens of thousands without power overnight.

Board members met on Friday to talk about the plan’s details, noting that while they expect creditors to fight back, the restructuring is needed.

Natalie Jaresko, the board’s executive director, said Puerto Rico’s bankruptcy is larger than that of General Motors in 2009 as she praised the aim to reduce the island’s debt by 60%.

“Those are huge numbers,” she said. “It’s a very important day for Puerto Rico.”

However, Carrión acknowledged that the plan itself would not lift Puerto Rico’s economy or spur economic development.

“It’s not a panacea,” he said, adding, “Nothing can happen unless we get out of bankruptcy.”

✅| FOMB filed today its proposed Plan of Adjustment, which reduces the Commonwealth’s total liabilities by more than 60%, from $35B to $12B. Restructures $35 billion of debt and other claims, and $50 billion of pension liabilities. Release: https://t.co/0HIGujHo9Q pic.twitter.com/CQxQGvUAcG

If approved, the debt restructuring plan would reduce Puerto Rico’s annual debt service to under 9%, down from almost 30 percent prior to Congress approving a financial package that led to the creation of the board.

The plan also would restructure general obligation bonds and others issued in previous years by Puerto Rico’s government, with creditors who hold bonds issued after 2011 facing bigger cuts since that debt has been challenged as unconstitutional.

In addition, the plan would impose an 8.5% in pension cuts for retirees that receive more than $1,200 a month, a move that Puerto Rico’s government has opposed. Puerto Rico’s public pension system currently faces more than $50 billion in unfunded pension benefits.

The island’s previous governor, who resigned in August amid political turmoil, vehemently opposed pension cuts. It was not immediately clear if the new governor, Wanda Vázquez, supported the plan. She was expected to address Puerto Ricans on Friday afternoon.

Meanwhile, Elí Díaz Atienza, the governor’s representative to the board, said during Friday’s meeting that while the government still opposes pensions cuts, it will consider the proposed plan.

“We must be pragmatic and realistic,” he said, adding that Puerto Rico needs to recover from its protracted economic crisis.