US Citizenship Applications Are Backlogged, Prolonging the Wait for Civil and Voting Rights 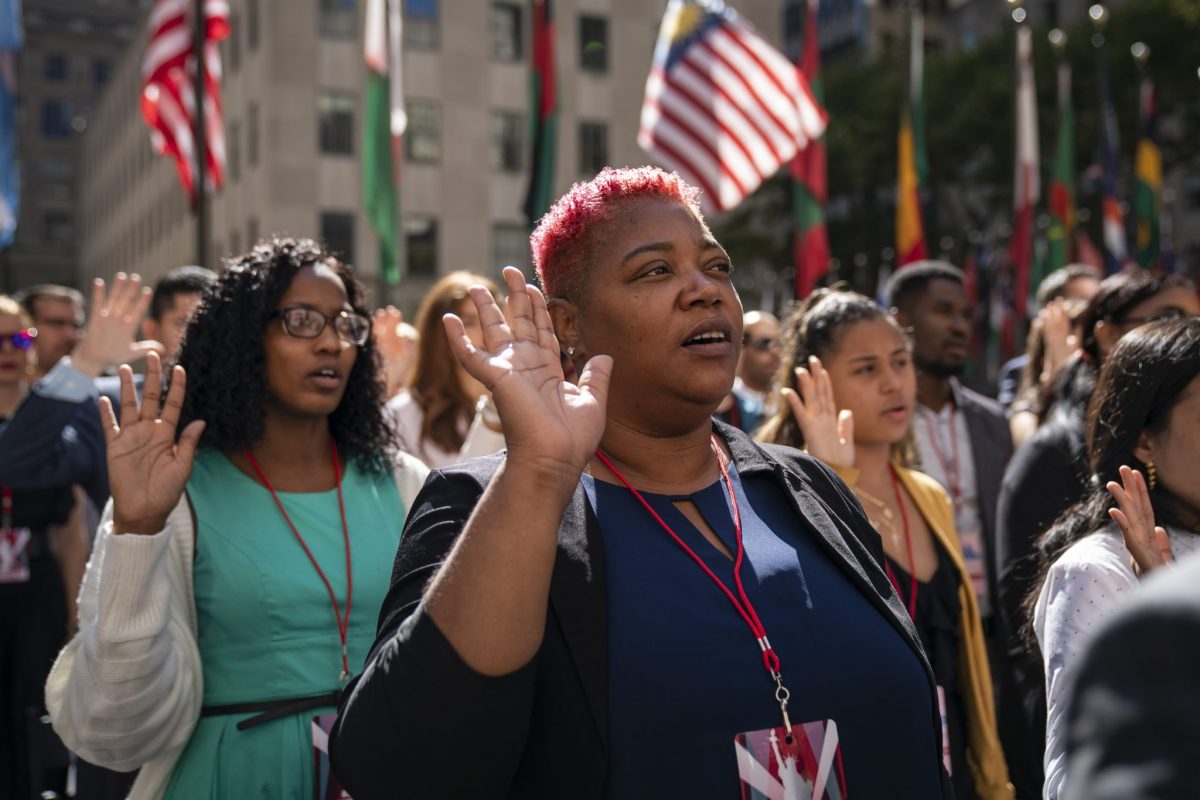 New U.S. citizens recite the the Oath of Allegiance during a naturalization ceremony at Rockefeller Center on September 17, 2019 in New York City. (Photo by Drew Angerer/Getty Images)

Every year, hundreds of thousands of people apply for citizenship in the United States, and America celebrates them with pageantry at citizenship ceremonies across the country. There’s even an annual Citizenship Day in mid-September.

But, as a researcher who studies citizenship, I think that Americans should know that there are also long bureaucratic delays that keep people from becoming citizens.

In a study published on September 12, the Colorado Advisory Committee to the U.S. Commission on Civil Rights, of which I am a member, found the backlog in naturalization applications has ballooned and wait times have doubled in the last three years.

The next steps in the application process take time: a 20-page form called the N-400, a US$725 filing fee, a biometric screening to authenticate identity and an interview with the U.S. Citizenship and Immigration Service to demonstrate knowledge of U.S. civics and proficiency in English, plus possible requests for more evidence.

Federal law considers 180 days a reasonable time for the agency to process applications. Agency guidelines further define a backlog as “the number of applications that exceed acceptable or target pending levels,” a definition that has been interpreted by Congress to mean six months.

Our new report shows that, as of September 17, there is a national backlog of more than 700,000 applications. Wait times across the agency field offices ranged from an average of 10 to 18 months, which is in excess of the six months as required by statute.

The report relied on government data on patterns of naturalization backlogs and public testimony from numerous experts about the consequences of the recent backlog. It was supplemented by independent research into the causes of the backlog and remedies that have helped to reduce backlogs in the past, as well as analysis specific to Colorado.

The precise wait time and pending caseload varies across regional field offices. Noncitizens in the military have not only longer wait times, but higher denial rates. Applications flagged for national security sometimes never emerge from the queue. Immigrants and their attorneys often have scant information about what is happening with their application while they wait.

Getting Back on Track

The U.S. Citizenship and Immigration Service says that interest in naturalizing is high, and it is processing applications as quickly as it can. It feels that to adjudicate cases more quickly would compromise accuracy.

An agency spokeswoman, Jessica Collins, told the Denver Post that the agency “continues to adjudicate the naturalization that skyrocketed under the Obama administration” and that the agency plans to add new offices and increase staff.

I do not doubt the agency is working hard, and there are some signs that its numbers are improving with new hiring. But in places like Colorado, the backlog persists despite the number of applications received returning to pre-election levels. The approaching election cycle means interest in naturalizing will rise again.

Also, I think that there’s another factor at play. The U.S. Citizenship and Immigration Service is now vetting individual applications more intensely than it did in previous years.

For example, it is now issuing more requests for evidence. It has added additional requirements, such as interviews for employer-sponsored immigrants and relatives of refugees living inside the U.S. or original signatures from high-level officers for noncitizens in the military. It reviews prior determinations more stringently than in the past.

The negative effects carry over to delays in other types of immigration petitions, too. Applications for DACA, Temporary Protected Status and asylum are all processed by the U.S. Citizenship and Immigration Service, for example.

The substantial delay to naturalization created by the backlog harms voting rights and civil rights.

The impediment on voting rights is straightforward: The right to vote depends on becoming a citizen. Based on the current wait times, those who apply now will not be processed in time to participate in the 2020 elections in many parts of the country.

Keeping people who are eligible for citizenship from participation in choosing their president and voting on high-stakes policies is a problem. This is true no matter how the participation of newly naturalized voters affects elections, because voting is an individual right.

Ultimately, naturalization is about more than material rights and benefits. In my forthcoming book, “Pursuing Citizenship in the Enforcement Era,” I find that immigrants in varying legal statuses feel insecure about their position in society. Even white high-tech workers from Canada, typically a subset of green card holders who feel secure in their belonging, feel worried about lacking citizenship in volatile times.

Government backlogs are not new, and they have been eliminated before. In 2006, Congress addressed a U.S. Citizenship and Immigration Service backlog by requiring regular reports and performance plans and by providing funding specifically for backlog elimination. It reset the clock.

However, so far, Congress has held only one hearing on the current backlog and has not taken any follow-up action. The U.S. Citizenship and Immigration Service may be hamstrung by certain White House policies, but there is some evidence that it is choosing to divert funds to fraud detection and other enforcement operations, rather than staying focused on processing the backlog of naturalization applications.

In my view, it will take a combination of political accountability, administrative commitment and legal action to push the agency to get back on track or ideally ahead of the next election cycle.