The Fight for Immigrant Rights Is About Elevating Racial Justice, Too (OPINION)

A bus transporting immigrants leaves a temporary facility at a US Border Patrol Station in Clint, Texas, on June 21, 2019. (Photo by PAUL RATJE/AFP/Getty Images)

It has been over a year since the Trump Administration reversed its zero tolerance policy, which called for the prosecution of people caught entering the United States illegally. Yet the battle over criminal prosecution and family separation of undocumented immigrants continues in courtrooms and the streets. This flurry of advocacy and direct action by mainstream immigrant rights groups is vitally necessary, but it has come at an unacknowledged cost. Too many advocates are overlooking the plight of Black immigrants and the crisis of mass incarceration. Placing the national spotlight on the struggles of some over others ignores the diversity of people who are suffering under the current administration’s racist rhetoric and punitive policies.

Like African Americans, Black immigrants experience unequal and unfair treatment because of systemic racism. Black people, regardless of citizenship status, are far more likely than any other group to be arrested, convicted, and imprisoned. Black people in the United States are imprisoned at 5 times the rate of whites, including children like Ashley Jones, who have been sentenced to die in prison, without any consideration of their age or circumstances of the offense. Black children are also five times as likely as white children to have a parent behind bars. Parental incarceration is an adverse childhood experience, one that puts children at risk for long-term financial hardship, family instability, and poor health.

However, the national discourse on immigrant rights must more clearly recognize that our criminal justice system is the main driver of family separation and child imprisonment. The punitive nature of contemporary immigration enforcement and detention is a direct extension of a broader pattern of the growth and intensity of the American penal system that began with slavery, and continued through the convict leasing system and chain gangs.

Increased immigration enforcement and detention —which has affected 2.5 million immigrants since 2003— is not specific to the Trump Administration. It has been gaining momentum since the 1980s when Congress began passing laws expanding the grounds under which immigrants could be jailed, and mandating the detention of some immigrants without a right to seek bond. These policies have enabled the increasing criminalization of immigrants and allowed for the rapid expansion and investment in immigrant detention. Evidence indicates that the increasing detention of immigrants during the 1980s and 1990s in part fueled the rise in mass incarceration during this same time period. The average daily detainee population tripled from 7,500 in 1996 to 20,500 in 2001, and by 2018 this number increased to 42,188. The estimate for 2019 is expected to surpass 45,000. 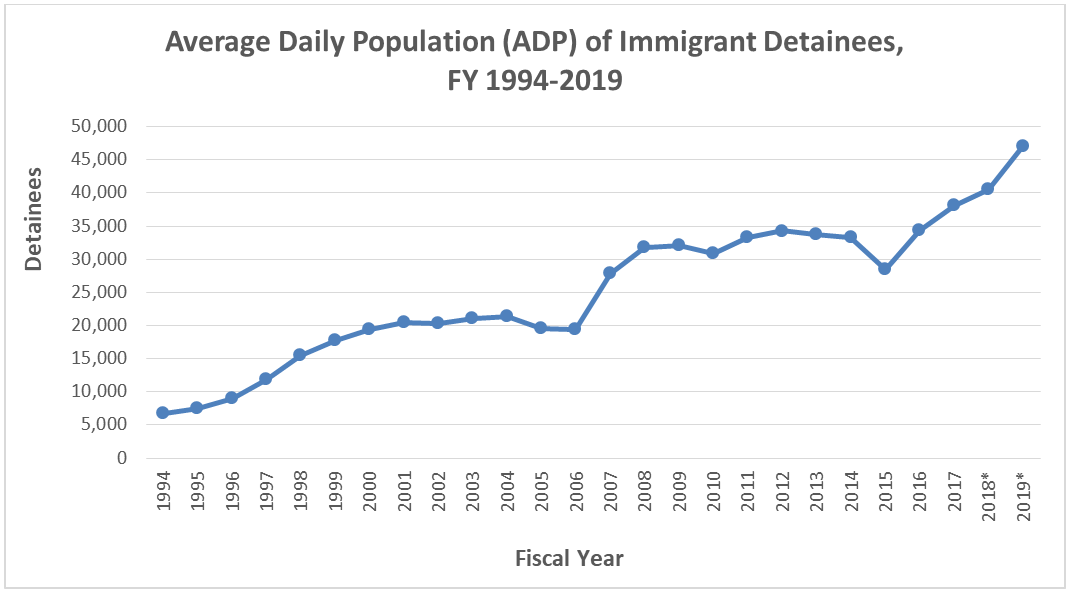 Mainstream immigration rights advocates must focus more of their criticism on the prison industrial complex. Insisting that immigrants are not criminals represents a failure of immigration rights activists to recognize the crackdown on immigrants is an extension of the crisis of mass incarceration. Focusing on the question of criminality perpetuates anti-Black racism.

Immigrant rights is not a single-issue struggle. It does not happen in a vacuum separate from the structures that harm Black immigrants and African Americans. The fight for immigrant rights must include the fight against our overzealous and racist prisons and policing. To build a transformative movement, advocates must better link the crisis of mass incarceration and illegal immigration. Advocates must elevate racial justice in immigration advocacy and advance immigrant rights within racial justice movements.

Thurka Sangaramoorthy is an associate professor of anthropology at the University of Maryland, College Park. Her areas of expertise include issues of social inequality, immigration, and health. Her book, Treating AIDS: Politics of Difference, Paradox of Prevention (Rutgers University), was named as a Rutgers Top 100 book of 2014. She tweets from @Thurka149.