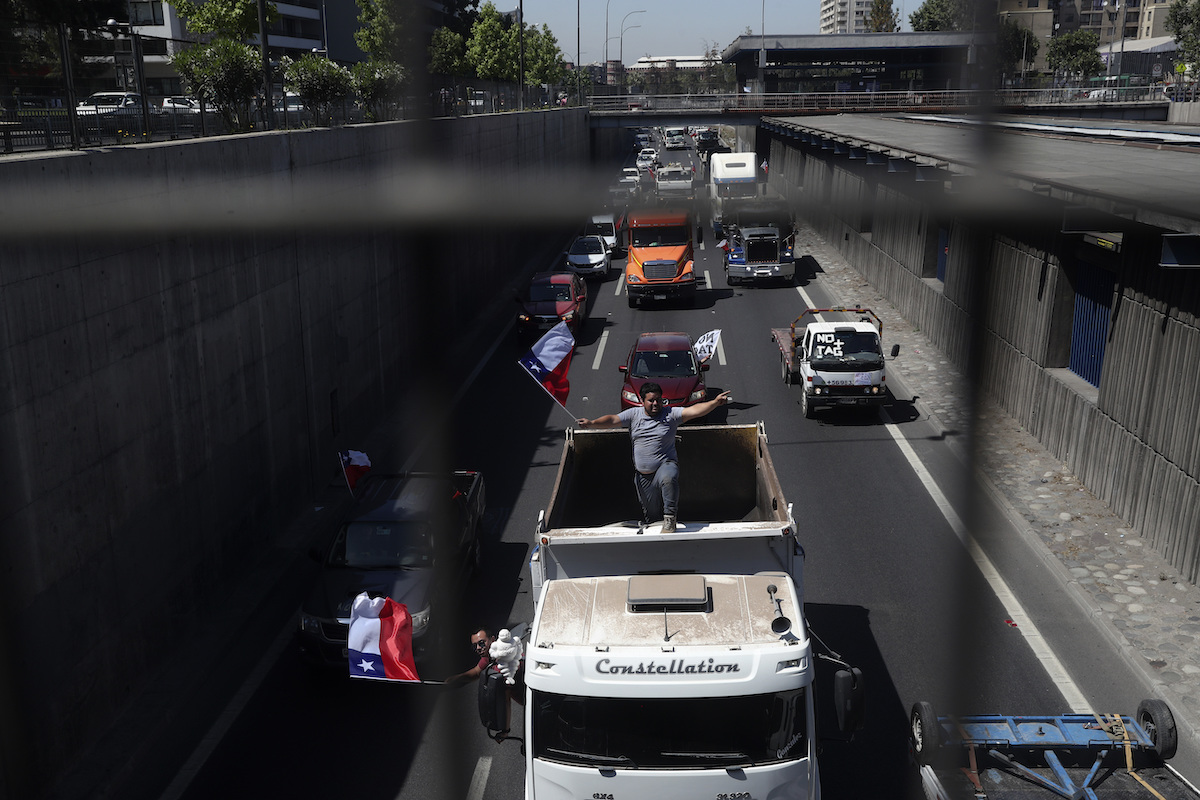 A demonstrator waves a Chilean national flag while atop a truck during a protest against highway tolls, in Santiago, Chile,Wednesday, Nov. 6, 2019. (AP Photo/Esteban Felix)

SANTIAGO, Chile (AP) — Chile’s president sent a bill to Congress on Wednesday that would raise the minimum wage, one of a series of measures to try to contain nearly three weeks of anti-government protests over inequality in one of Latin America’s richest countries.

President Sebastian Piñera signed the measure that seeks to guarantee a minimum salary of about $470 a month as demonstrations demanding improved social services and greater equality continued. Some groups clashed with police in the capital, while hundreds of honking vehicles traveling in a caravan caused massive traffic jams to demand a reduction in tolls.

Flag-waving demonstrators brought traffic to a standstill in some roads and affected many commuters. Television images showed Finance Minister Ignacio Briones, who was headed to Congress in the port city of Valparaíso, stepping down from his vehicle to talk to truck drivers.

“We have a series of huge social demands, and you are all aware of that. People are having a really, really rough time in all sectors,” he told them. “It’s easy to get riled up and think that we can suddenly address them all, but just like in a home, if you spend all the savings, then what?”

The unrest began last month over a hike to subway fares, but it has grown into a massive movement demanding a broad range of changes. Most of the protests have been peaceful, but some have turned violent. At least 20 people have died in clashes, looting and arson that forced the cancellation of two upcoming major international summits. 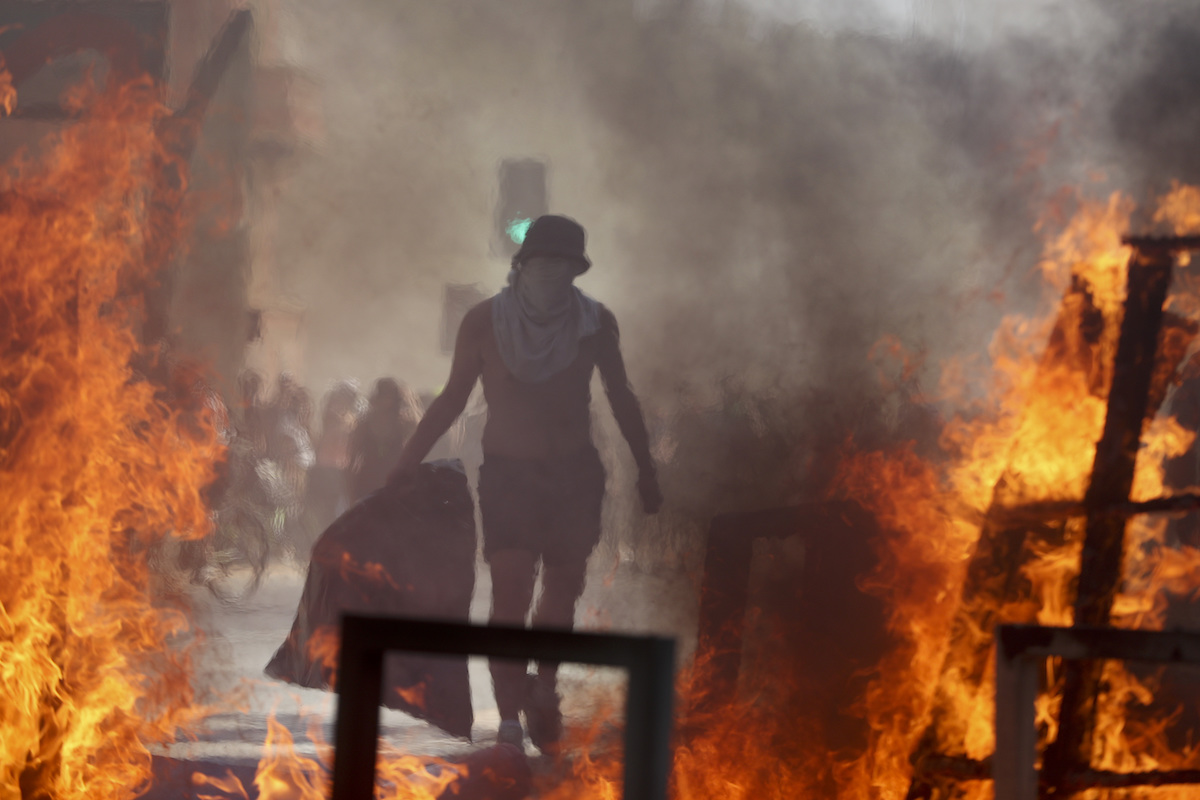 Chile’s center-right government has responded with a host of proposed changes that must be approved by Congress. But many Chileans say they’re a mere Band-Aid that fails to address deep social inequality that has been unresolved since Chile returned to democracy in 1990 after a 17-year dictatorship.

“The measures taken up to now by the government are an act of desperation,” said Jorge Cabrera, a street vendor in the Chilean capital. “They’re not going to convince me with momentary proposals; these are things that we’ve been asking for more than 30 years.”

Many slam what they label a “neoliberal” economic model that on the surface makes Chile seem like a Latin American economic success story, while it masks a widely criticized pension system and hybrid public and private health and educations systems that give better benefits to the rich, who can afford to pay more.

Some protesters are demanding a new constitution to replace the 1980 charter written under Gen. Augusto Pinochet’s 1973-1990 military dictatorship. It allows many social services and natural resources, including water, to be wholly or partially privatized.

Flor Silva, a 70-year-old retiree, said Piñera’s plan to increase the minimum wage seems like a bad joke because no one can survive with that money. But she still hopes it helps.

“Even a coin helps us since prices keep going up,” she said. 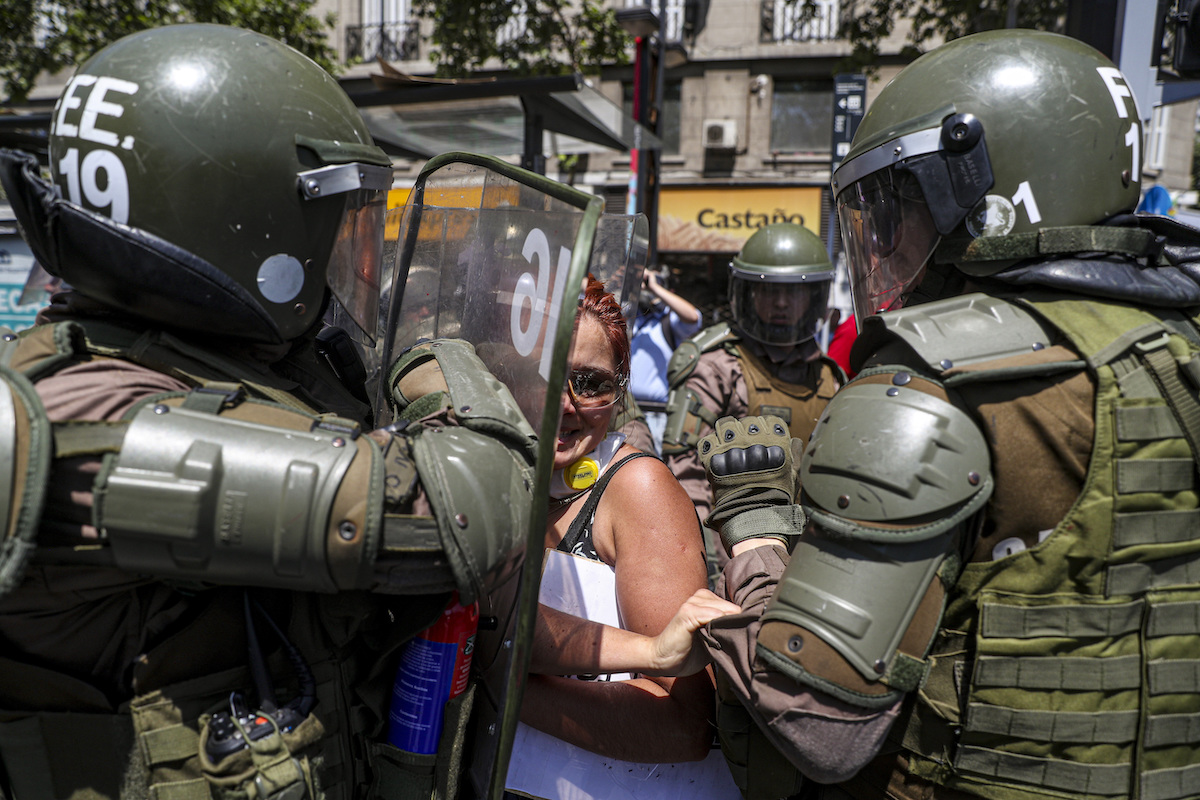 A woman is detained by the police during an anti-government protest in Santiago, Chile, Wednesday, Nov. 6, 2019. (AP Photo/Esteban Felix)

Protests were being staged in cities nationwide. Riot police fired water cannons at crowds of rock-throwing demonstrators and violent clashes flared up outside one of Latin America’s tallest skyscrapers. Authorities said that a police officer had been detained after he was accused of injuring two minors with buckshot inside a school in Santiago.

A U.N. human rights team has been gathering testimony about hundreds of people allegedly injured by Chile’s police during the protests.

The team has heard accounts about ruptured eyeballs, broken bones and other serious injuries inflicted by police pellets or the impact of tear gas canisters.

Chile’s state Medical College said more than 180 people have suffered severe eye injuries, most of them caused by rubber bullets used to disperse crowds in the protests.