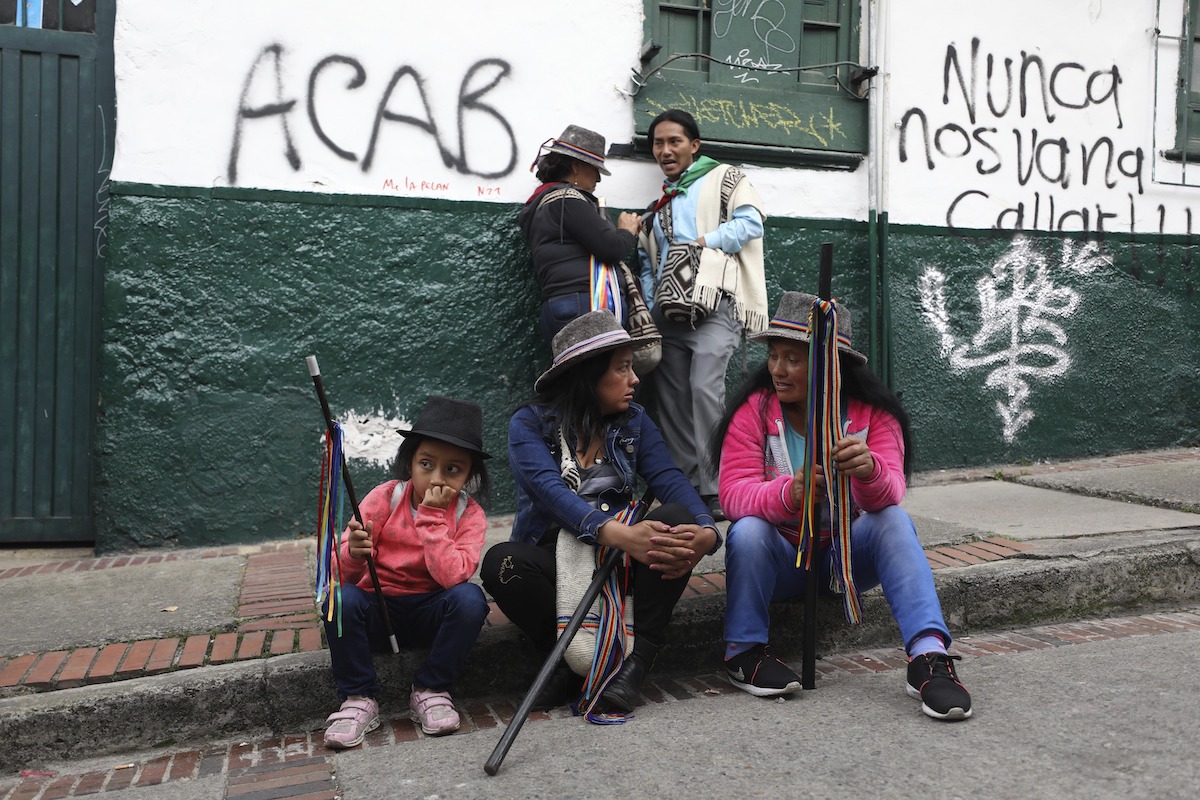 Members of the Indigenous Guard wait for the start of a protest march against President Iván Duque, in Bogotá, Colombia, Friday, Nov. 29, 2019. (AP Photo/Fernando Vergara)

BOGOTÁ, Colombia (AP) — The government of President Iván Duque extended an olive branch Monday to labor and student groups organizing recent protests in Colombia by offering to start separate talks on their demands.

Administrative Director Diego Molano said the government is willing to immediately initiate talks on 13 points identified by the National Strike Committee—but also asked it to refrain from a planned protest on Wednesday.

“We’ve asked them, given the clamor of Colombians and so that the country can begin the Christmas season peacefully, that they suspend the December 4 strike,” Molano said, noting it could have economic and transportation repercussions.

Members of the National Strike Committee, comprised of over a dozen labor, student and other activist groups, said it was too late to stop Wednesday’s protest but expressed hope the offer for dialogue nonetheless remains.

“The government has been very slow to convoke us,” said Julio Roberto Gómez, head of the General Labor Confederation, one of the nation’s largest unions and a member of the National Strike Committee.

Duque had previously insisted that the strike committee join the “National Conversation” he has begun with a wider swatch of society to draft short- and long-term solutions to issues like corruption and inequality.

“I’m the president of all Colombians,” Duque said in a televised interview Monday. “Those who march and those who don’t march.”

Protest organizers have refused to participate in that dialogue, bashing it as a conversation amongst allies that would dilute demonstrator concerns, and instead demanded that the president establish separate talks specifically with them.

Molano did not make clear if the government would still be willing to hold independent talks with the National Strike Committee even if it proceeds with a Wednesday strike.

Authorities estimate 250,000 Colombians took to streets around the nation in protests against Duque’s government on November 21. The Strike Committee held a second demonstration last week that drew far fewer people.

The strike steering committee’s 13 demands include asking Duque to withdraw or refrain from tax, labor and pension law changes that are either before the legislature or rumored to be in development.

It also wants Duque to review free-trade agreements, eliminate a police unit accused in the death of an 18-year-old student protester and fully implement Colombia’s historic peace accord with leftist rebels.