Why Are Puerto Ricans Angry at Governor Wanda Vázquez and Her Administration? 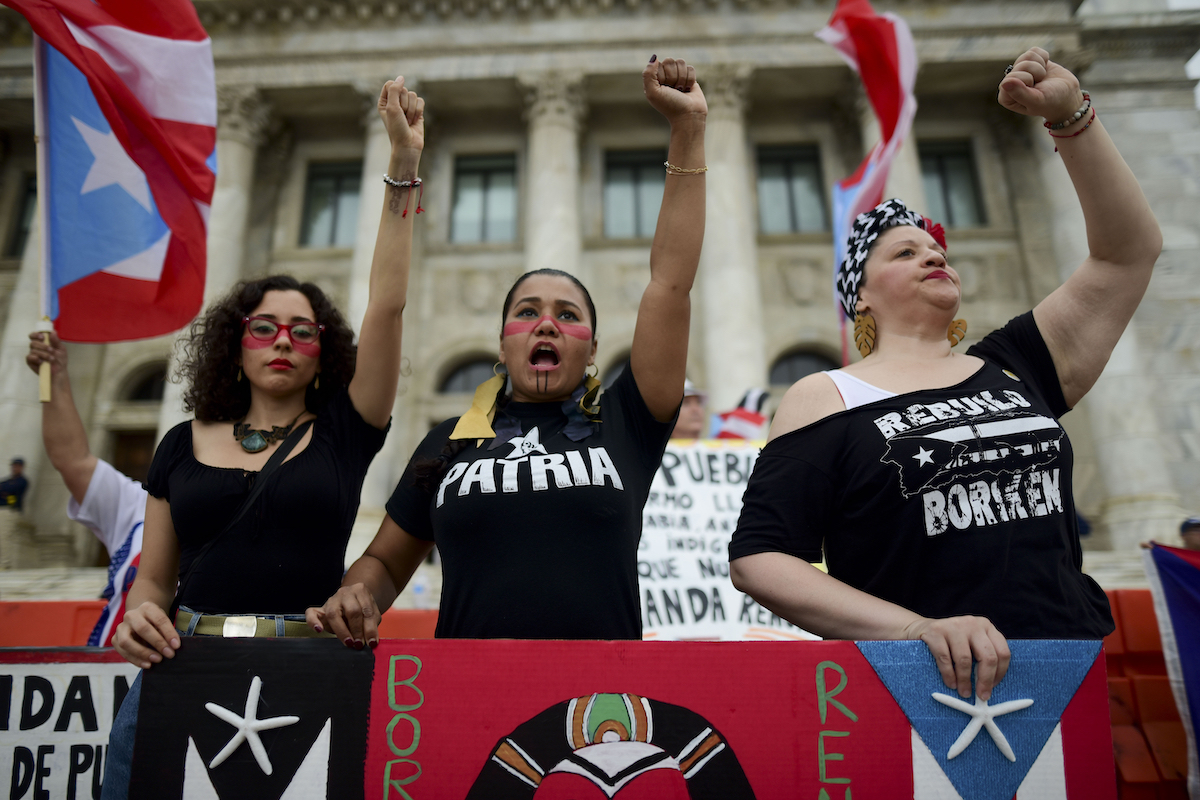 SAN JUAN, Puerto Rico — As American audiences focus on the symbolic and not functioning guillotines Puerto Rican protesters carried on Thursday, the news cycle on the island is telling a totally different story.

Um, the people of Puerto Rico are carrying a guillotine to the Governor’s mansion right now. pic.twitter.com/uAeH1WoLcN

Demonstrators took the streets for the third time in six days to protest the mismanagement of emergency supplies for Hurricane María that were discovered in a government-owned warehouse last Saturday, barely miles away from where people displaced by recent earthquakes were in need of said supplies.

On Thursday at 5 p.m., protesters gathered in front of the capitol building in Old San Juan and marched towards the governor’s mansion, La Fortaleza, demanding the resignation of Wanda Vázquez, Puerto Rico’s non-elected governor.

One of the biggest takeaways from the mass protests happening in Puerto Rico right now is that they are deeply rooted in Vázquez’s history of hiding information or blatantly lying to the public.

On Thursday, Vázquez admitted that she always knew about the existence of relief warehouses after a statement shared last Saturday said that she and her administration were investigating if there were other warehouses due to the discovery of the Ponce warehouse

After saying that she didn't know about relief warehouses in #PuertoRico & firing officials because these supplies were not shared with those displaced by earthquakes, Gov @wandavazquezg today said that (wait for it) she ALWAYS KNEW ABOUT THE WAREHOUSES.https://t.co/AEvqjSlewt

On Friday, the Governor was accused of not being transparent with citizens, after denying her involvement in a suspension query happening in the Department of Social Services (Departamento de la Familia in Spanish). It all started after the emergency supplies were found in a Ponce warehouse.

Vázquez had met with the all the heads of government agencies, and alleged that the Department of Social Services refused to give information about their storage for emergency situations, and asked for the resignation of the head of the family department, Glorimar Andújar Matos, for allegedly not cooperating with the the governor.

A few days before her resignation, Andújar Matos had removed Surima Quiñones —who was appointed by the governor as Fortaleza’s representative in Guayanilla, one of the municipalities most affected by the quakes— from her position as head of the Administration of Family Socioeconomic Development, which fell under Andújar Matos’ supervision, due to an internal investigation.

Then, reports came out that Vázquez and her Chief of Staff, Antonio Pabón, had asked Andújar to reverse her suspension of Quiñones. When asked about it by Telenoticias, the Governor said on Thursday that she had no memory of that happening, and that she was not close to Quiñones—whom she had appointed.

When Telenoticias reporter Nuria Sebazco confronted Pabón about this, he denied it. Even when Sebazco showed Pabón a printed copy of an email where he asks for Andújar Matos that Quiñones should return to her duties, he denied it—although he confirmed the veracity of the email.

This interaction sparked Puerto Rican Twitter to call out the Governor for once again hiding information. Earlier this week, Vázquez had tweeted a video where she claims she found out about the amassed aid in the warehouse on Sunday, but later said in an interview that she was always aware of the warehouses.

But the 13 warehouses full of undistributed supplies was just the tipping point for Puerto Ricans to once again gather and protest in front of the governor’s mansion.

Since former governor Ricardo Rosselló’s resignation last July, the hashtag #WandaRenuncia has been going around social media, and small protests against her erupted after Rosselló resigned Although people were infuriated with Rosselló’s actions, the distrust of Governor Vázquez dates back to Rosselló’s administration.

Back when she was Secretary of Justice, Vázquez did not investigate the thousands of water bottles that were found on an abandoned field in Puerto Rico, and other emergency aid that was meant for Hurricane María victims that was never distributed. In 2018 when, as head of the Justice Department, she was accused of using her influence to involve herself in a case concerning her daughter, which led to an investigation that was later on mocked in the #TelegramGate chat.

Although many who are against the protests point out that they have not gained the momentum that #RickyRenuncia reached in July of 2019, before Rosselló resigned, protesters had been holding demonstrations for weeks that kept growing in size as more people joined in, including celebrities.

Around 10:40 pm on Thursday, videos showed a flash grenade used at protestors, prompting clashes between demonstrators and law enforcement, reminiscent of the protests back in July of 2019.

The morning after, anger was in the air. For protestors, the police had crossed a line by inciting violence on what was considered a peaceful protest. Many who were near the barricade heard how police said through a megaphone that the protest had become illegal and gave warning before using tear gas on them.

Police commissioner, Henry Escalera, told NotiCentro that police gave about 14 warnings, and protesters continued throwing objects, so they dispersed the crowd with gas.

Pictures online surfaced of damaged property, masked protestors causing damage to streets and news cars —which some have accused of being undercover cops meant to instigate— and protestors sporting pellet gun wounds.

The damaged property was what divided the country. Some argue that you can protest without damaging businesses and walls, especially in Old San Juan, which is a tourist destination, while other defer saying that what the government is doing is more harmful than painted walls and broken windows.

While the argument went on, pictures surfaced online of a flooded shelter in Yauco, another of the most earthquake devastated municipalities.

Photos of flooding in Ponce were also published.

3 responses to “Why Are Puerto Ricans Angry at Governor Wanda Vázquez and Her Administration?”

Leave a Reply to Meet the New Wanda, Same as the Old Wanda: On Puerto Rico and Its Continued Political Mediocrity Cancel reply