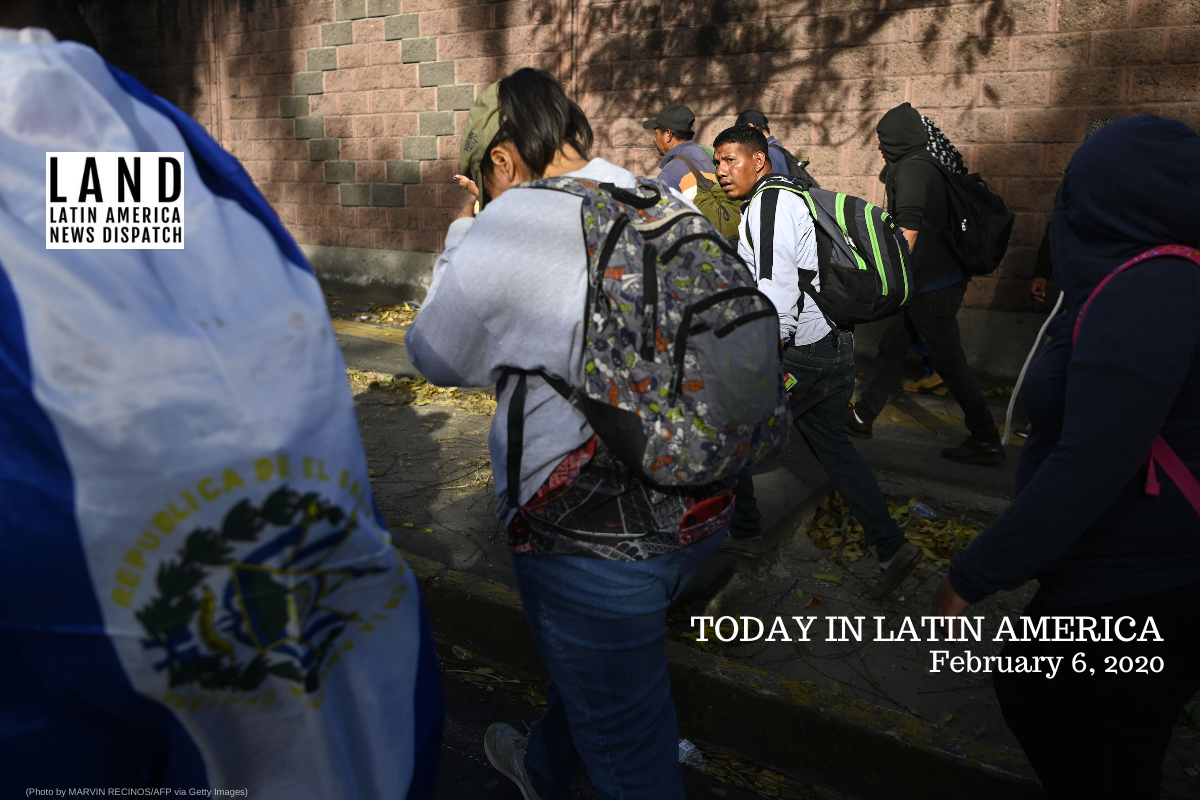 A group of Salvadoran migrants start their journey towards the United States in San Salvador, on January 20, 2020. (Photo by MARVIN RECINOS/AFP via Getty Images)

EL SALVADOR: A new report by the Human Rights Watch revealed that at least 200 Salvadorans who were deported by the United States between 2013 and 2019 were subsequently murdered, raped or tortured back in El Salvador. The report concluded that at least 138 Salvadoran deportees were killed by state security forces, death squads, gangs, and former partners, while another 70 were subjected to sexual violence, torture, and extortions. Most of the deaths listed in the report occurred within a year of deportation to El Salvador, at times within days. Pointing El Salvador’s underreporting of crimes and high levels of impunity across the country, the HRW estimates that the actual tally is much higher. Alison Parker, a deputy director at HRW, stated that U.S. authorities are “knowingly” putting Salvadorans at risk by participating in migration deals that require asylum seekers from Central America to remain in their respective countries while their applications are pending.

BRAZIL: President Jair Bolsonaro’s administration picked a former evangelical missionary to lead a department created to protect uncontacted and recently contacted indigenous groups. Ricardo Lopes Dias worked from 1997 to 2007 for the organization New Tribes Mission, now called Ethnos 360, which aims to convert uncontacted communities. The appointment stirred widespread concern inside and outside of government, with the UN special rapporteur on indigenous rights warning that it “may have the potential to cause genocide among isolated indigenous people.” In an interview with a Brazilian newspaper, Dias assured that he “will not perform evangelization” from his new post.

BOLIVIA: Campaigning for the May 3 special election began this week, with several presidential candidates, including current interim president Jeanine Añez, splitting the conservative vote. Carlos Mesa, the runner-up in Bolivia’s October election, is also running. To win without a runoff, a candidate would have to receive more than 50% of the votes or at least 40% with a 10-point margin. Exiled president Evo Morales is seeking a Senate seat, though it is unclear whether the Electoral Tribunal will allow him to run, since he is currently living in Argentina and could be arrested if he returns to his country. For the presidential race, Morales’ party, the Movement Toward Socialism, or MAS, nominated former finance minister Luis Arce.

COLOMBIA: The newspaper El Tiempo reported that three out of ten women who faced illegal abortion charges in the last 20 years were rape survivors, as a top court reconsiders the country’s abortion laws. Many of those cases never went to trial, in part because abortion has been legal under some circumstances, including rape. A research institute that specializes in reproductive health found that the vast majority of abortions in Colombia occur outside the law, with one in three abortion patients suffering complications from the procedure.

JAMAICA: The island’s government banned all flights between Jamaica and China in light of the World Health Organization’s declaration of the coronavirus as a global health emergency. Jamaicans were also strongly advised against traveling to China, and any individuals entering the island from China could face a period of quarantine of at least 14 days, according to Jamaica’s Minister of Health and Wellness. The Ministry of Foreign Affairs and Foreign Trade also created an online forum for Jamaicans currently in China to register their whereabouts. At least 400 Jamaicans have registered, with an estimated 29 individuals indicating that they are in Wuhan, where the virus originated.

CUBA: Political dissident and journalist Guillermo Fariñas was “arbitrarily” arrested by Cuban authorities, according to Madrid-based Cuban Observatory of Human Rights, which stated that his whereabouts remain unknown. Fariñas was detained on his way to the Spanish embassy in the capital Havana. He was scheduled to pick up a visa for a trip to Spain and Belgium where he was planning to meet with civic and political leaders. Fariñas also allegedly planned to attend a session of the European Parliament’s Subcommittee on Human Rights. Fariñas is known for his hunger strikes in protest of the Cuban government, which total at over 20 with the longest one lasting 135 days.

MEXICO: More than 3,000 Mexican farmers were involved in a confrontation with La Boquilla dam’s control group Tuesday to stop water payments to the United States. Mexico’s government sent National Guard officers to protect the dam, but angry farmers retaliated. Farmers took over another dam in the border town of Ojinaga earlier this week. Mexican President Andrés Manuel López Obrador commented on the conflict Wednesday, assuring that Mexico does “not want an international conflict” and will abide by the 1944 Treaty. Since López Obrador took office in 2018, Mexico has fallen behind on paying its debts, with the dispute over water payment growing as well.

U.S.-MEXICO BORDER: Arrests on the U.S.-Mexico border declined for the eighth consecutive month this year, according to CNN. Data from U.S. Customs and Border Protection shows that apprehensions dropped nearly 10% in January. The drastic decrease in arrests results from a massive influx of migrant children and families over the past year. Customs and Border Protection Commissioner Mark Morgan said the decline was also affected by President Trump’s “network of policy initiatives.”