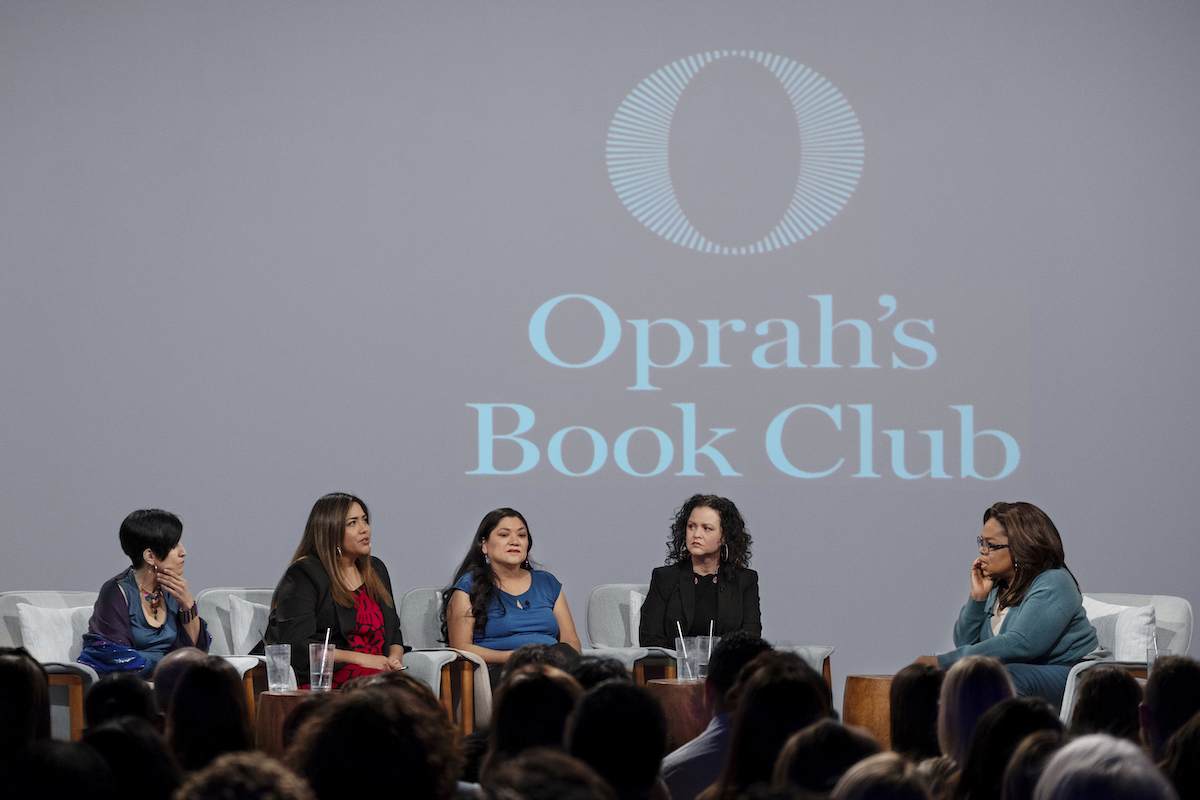 TUCSON, Arizona (AP) — When Oprah Winfrey chose the novel “American Dirt” for her book club, she imagined engaging in an impassioned television dialog about the narrative, which follows a Mexican mother and her son fleeing to the United States.

Instead, Winfrey ended up organizing a show that put the book, author Jeanine Cummins and Winfrey herself on trial. After critics complained about the novel’s portrayal of Latinos, she turned the forum into a debate about the marginalization of Latino voices, the lack of diversity in publishing and the question of who is best suited to tell a given story.

Just a few months ago, the book was one of 2020’s most welcome releases, described as a modern-day version of John Steinbeck’s classic “The Grapes of Wrath.” But criticism quickly mounted and made it Exhibit A in grievances against the industry. The Mexican-American writer Myriam Gurba condemned the novel as a “Trumpian” charade crammed with Mexican stereotypes.

Winfrey and Cummins were joined on the show by three prominent critics of the book. The Associated Press was allowed to attend the taping of the highly anticipated program last month in Tucson, not far from where Cummins wrote and researched parts of the novel. The program airs Friday on Apple TV Plus.

Speaking to the AP after the show, Winfrey lamented the controversy.

“This has taken up a lot of my energy, a lot of her [Cummins’] energy, and it’s taken away my attention from why people want to read books,” she said.

Future book club picks, she said, will almost certainly include Latino authors — she has only chosen a handful since founding her club in 1996. She promised a more thorough approach that anticipated possible backlash, saying she was not going “to wade into that water” again.

Cummins said the conversation was “productive.”

Published January 21, the book has been a bestseller, fulfilling the hopes of the Macmillan-owned Flatiron Books, which outbid several competitors and paid seven figures for the manuscript. Sales have exceeded 200,000 copies.

But the publisher has retreated from any grand literary claims. The blurb comparing the story to “The Grapes of Wrath” has been removed from the cover, and Flatiron’s president and publisher, Bob Miller, apologized for the book’s promotion, including a luncheon last year that featured barbed wire centerpieces based on the book’s jacket design.

In her opening remarks, Winfrey defended her choice of “American Dirt,” saying the book had made her feel personally connected to the stories of immigrants. But she acknowledged the criticisms and said her response was to “lean in” and embark on a conversation without “having to cancel, to dismiss or to silence anyone.”

After introducing Cummins, Winfrey was openly sympathetic but directly raised the many issues of recent months. The author was visibly tense —her expression grim and unchanging, her hands and fingers entwined— as Winfrey read from social media postings that called Cummins “clueless” and her novel a “whitewash” of a human rights crisis. 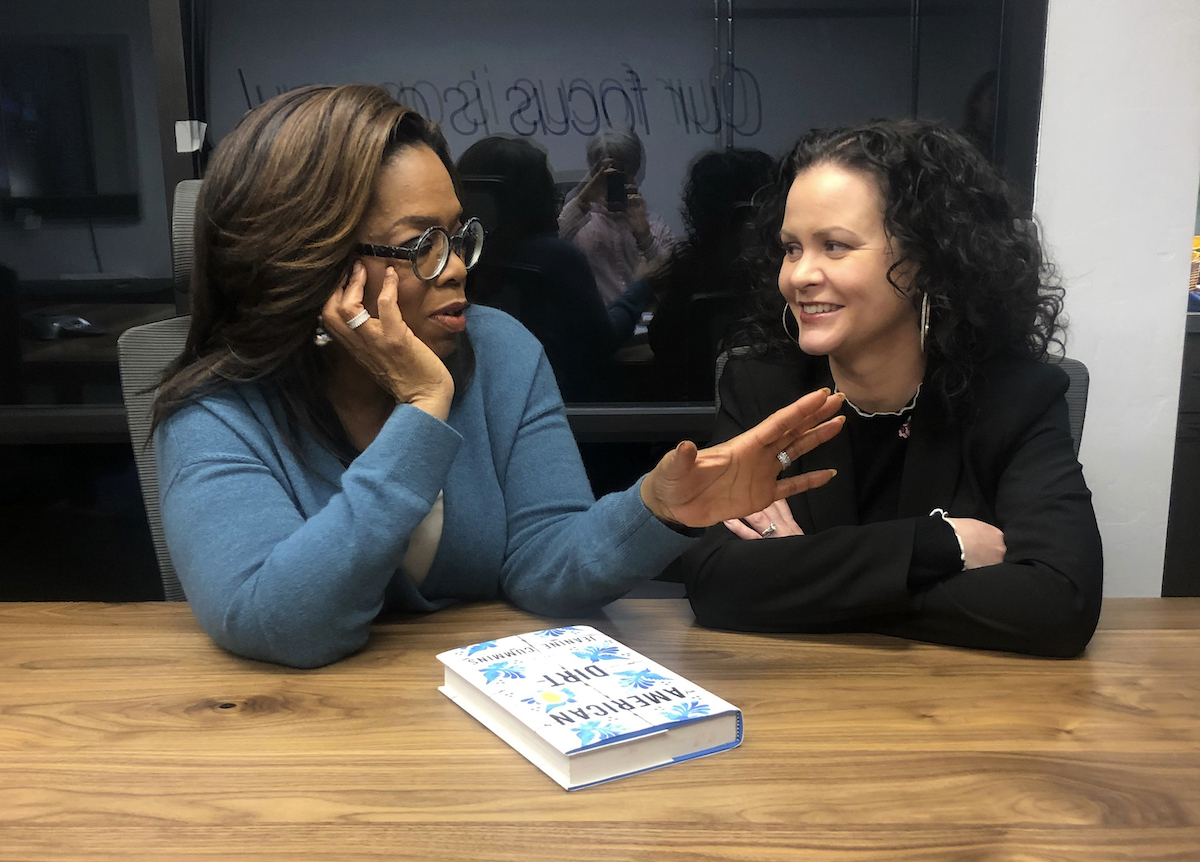 Winfrey asked if Cummins regretted her author’s note, in which she speculated that someone “browner” might have been worthier to write the novel. Cummins called her language “regrettable” and said she had used “a very clumsy phrase.” She also did not dispute that she had enabled the “conflation” of her Irish husband’s wait for citizenship —she described him in the note simply as an “undocumented immigrant — with the far more dire battles many face at the U.S.-Mexico border.

The two were then joined by Esther Cepeda, a Washington Post syndicated columnist; Julissa Arce, an activist, commentator and author of the bestselling “My American Dream;” and Reyna Grande, whose books include the bestselling memoir “The Distance Between Us.”

Grande said the industry was giving “American Dirt” a level of attention far beyond what she and other Latinos have received. Arce chastised Cummins for writing an essentially apolitical book, omitting any direct criticisms of the Trump administration.

“For some reason, someone who has a name like Jeanine Cummins can write about anything,” Cepeda said. “Someone with a name like ours, well, we can only write about immigration.”

Cepeda faulted Winfrey for the virtual absence of Latino writers in her club. “You are a king and queen maker,” Cepeda said.

“Well, I am guilty of not looking for Latinx writers,” Winfrey said. “I will now, because my eyes have been opened to see, to behave differently.”

During the taping, Winfrey called the show a “seminal moment” that she hoped would lead to lasting change.

In a recent telephone interview, Cepeda said she wished some of the answers, especially about how Winfrey and Macmillan would improve diversity, were more specific. Added Arce, in an email to the AP: “Jeanine or Oprah were not there to answer questions. They were there to defend the book. I understand it. When we tried to push Oprah and Jeanine, they were unwilling to really dig deep.”

Cummins is the author of three previous works, including a memoir about her cousins’ murder and two novels that draw upon her own Irish heritage and time lived in Ireland. The recent criticism has changed her future plans.

In a pre-publication interview with the AP, Cummins had said she was working on a novel set, at least in part, in Puerto Rico. She now expresses doubt about that book.

“I’m not a glutton for punishment,” she said, explaining that her greatest concern is in keeping her literary “voice” and “making sure that the experience of this moment doesn’t make me second-guess or subvert the stories that move my heart.”

On stage, Winfrey mentioned that she was deeply shaken by an online letter endorsed by dozens of authors that urged her to drop “American Dirt.” But she told the AP that she never considered changing her mind.

“If I dropped the book because of pressure and not because I felt something was wrong, then anybody is subject to being rescinded, silenced, erased,” she said.

Winfrey’s book club has been an industry blessing and flashpoint since she launched it nearly a quarter-century ago to make public her passion for sharing books among friends.

The club was a hit beyond anyone’s expectations. Authors saw hundreds of thousands of copies of a given book sell. They anticipated a call from Winfrey like would-be lottery winners. In 1999, she received an honorary National Book Award for her belief that great literature “must become the province of many.”

Critics have closely scrutinized her picks, if only because her word matters so much. She has been chastised for ignoring newer books and older ones, for sentimentality and even gullibility, as in 2005, when her selection of James Frey’s addiction memoir “A Million Little Pieces” proved disastrous after Frey acknowledged published reports that substantial parts of the book were false.

After ending her syndicated talk show in 2011, Winfrey launched Oprah 2.0, a more Internet-focused initiative that included joint promotion with Amazon.com.

Einhorn said she loved the book in part because its story of a parent and child connected to her own experiences as a mother. (Grande offered similar praise even as she criticized the publication overall).

Einhorn said Cummins had been unfairly singled out for an industry problem far broader than “American Dirt.” She also suggested that the author’s lucrative deal — the object of much resentment — would not have happened had so many publishers not bid for it.

Weinberg insisted that diversity was a priority at Flatiron and spoke of bringing in strategists and “all different sorts of people” to address the issue.

Did those people suggest you hire more Latinos? Cepeda asked. “It sounds simple, but it’s not simple,” Weinberg responded, saying that Macmillan had to become a “different kind of company,” on all levels.

He rejected a specific idea raised by Winfrey—that Macmillan establish a Latino division. (Winfrey herself has an imprint at Flatiron).

“I resist any special divisions,” he said. “I want everybody to be able to do everything.”

In the second half of the show, Winfrey brought in other voices—taped segments with Central America immigrants who risked their lives to enter the U.S. and officials from the International Rescue Committee. She also invited questions from an audience diverse in age and background and composed almost entirely of women. Individuals were chosen through a combination of local outreach and invitations to those who engaged online with the book club.

Most of the audience praised the book, with one speaker saying it reminded her of African American ancestors who had fled slavery. Paulina Aguirre-Clinch, branch manager of the nearby Pima County Public Library, said “American Dirt” was less a literary work on the level of Steinbeck than a thriller with notable flaws.

“And to be 100 percent honest with you, because it was a thriller, I felt like it touched upon a lot of things, but it didn’t really go deeply into it” them, Aguirre-Clinch said.

“If you had told me it was a thriller,” Winfrey added, “I wouldn’t have read it.”

Arce challenged Cummins about her intentions for the book, which Cummins has called a “bridge” to other communities. To which communities? “Who did you write this book for?” Grande asked, saying that she didn’t feel “American Dirt” was meant for her.

“I wrote this book for the people in this room,” Cummins said.

Whose minds did you want to change? Arce wondered.

“Mine,” called out one audience member. “Mine,” said a second, then a third and a fourth and several others.